My own wee adventure

My own wee adventure


On a driech weekend on Skye with a friend who isn't really into walking hills but loves the island. Easter Sunday late morning saw us and our two dogs walking to find this cave. We parked at the harbour at Elgol and for once could not see any views, the clag was everywhere, but we had gone for this specific walk and the weather wouldn't stop us.
The walk description says a few boggy bits, more like a few dry bits, most of the walk was over very boggy land. A few sheep meant dogs had to go on leads for a while but not long and they were back to bounding about in the heather (and bogs!). Inquisitive as they are it was a bit nerve-wracking near the cliff tops. The rain had stopped but the views were still shrowded in mist. The path is difficult to see at times but we just kept near those scary cliffs and knew we wouldn't be far off the path. Some kind of big bird was annoying the gulls, could it have been a sea eagle? Didn't get a good view of it but it was about twice the size of the herring gulls.
Arrived at the boulder strewn beach and worked out which way to go, the tide was out but thanks to the weather the rocks were wet and slippy in places. We picked our way slowly around the shore to where the cave is, I was being a bit of a scaredy cat and nearly gave up part way but with encouragement and my friend guiding me we found the cave. I failed to get into the cave at my first attempt but again my friend encouraged me to keep trying and I achieved my goal! I was in the cave only to fall on my backside in the mud! He was worried about the dogs getting injured trying to follow me in so he stayed outside (that's what he said anyway

) I forgotten to take my camera so only pic I have is one taken on friends phone, a bit blurry but that is me in the cave 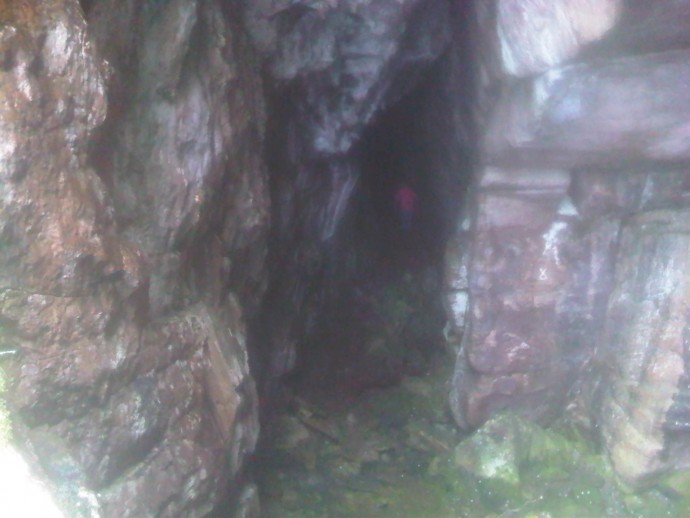 We didn't stay long and picked our way back to a gap in the rock face and got back to the top of the cliffs again. Stayed a bit further away from the edge on the way back, seeing that big bird again, still annoying the gulls. Safely back to Elgol where the view of the mountains was improving. I can recommend this short walk but maybe wait for better, drier, weather. My legs knew they had been for a walk that day, quite tired at the end of it even though it wasn't that long.

Re: My own wee adventure

And a fine wee adventure it was Chrisabelle

Always wondered what Prince Charlie's cave was like so it was good to see your photo.

Just the other day I was hearing about someone who is going to retrace the Prince's footsteps from Culloden all the way to Skye and to the cave. It's his project for the summer. I am hoping he is a member of this site and prints a walk report here, just think it would be really interesting.

Re: My own wee adventure

Thanks Morag1, the photo doesn't really do the cave justice, it's quite impressive and goes a little further back than can be seen. It's quite a clamber over rocks to get into the cave which can't be seen from the "beach". Can see why it was used to hide in.
The walk from Culloden would be tremendous, hope we do get to see a report.