Playing it safe on Meall Ghaordaidh

Playing it safe on Meall Ghaordaidh


When I first thought about doing this hill I wanted to go for a big day out, carrying on to the Corbett Beinn nan Oighreag then over to Tarmachan and back down the SW ridge to circle back to the car at Glen Lochay... but today I was just out for a short one so aiming for the one Munro with the Corbett as an optional extra

Long weekend away, getting the last flight home at midnight, so I didn't jump up when the alarm went off in the morning

The car park at Glen Lochay was empty when I arrived and it was just after noon when I started walking. The postman I'd followed right around the glen (after taking a detour when I came across pot hole repairs causing a road block) kindly pointed out the starting point and told me to just follow the path all the way up... clearly thought after getting stuck on the road I needed directions all the way

Cloudy but dry, I followed the directions on the route description. I stopped to take plenty of photos, including this one of my target hill where the summit was still hidden from view 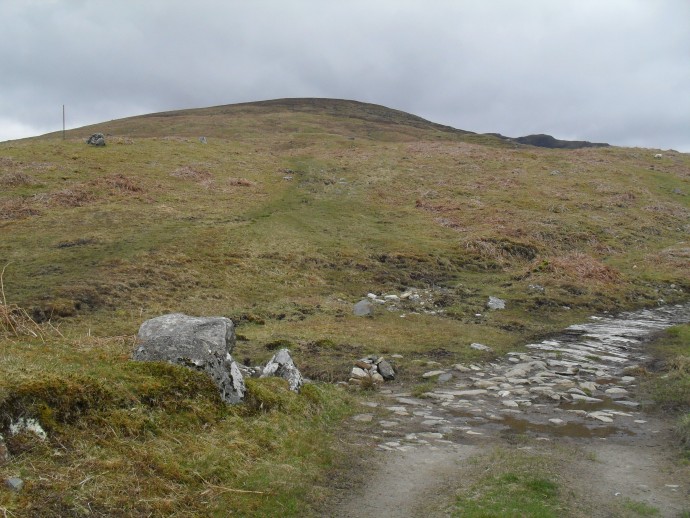 Of course it wasn't until I looked over my pictures at home that I spotted the pole and realised this should have been my turn off point!

Instead I was looking for the shielings first and came across them within 10mins. Now I started looking for the cairn to turn off and could see lots of faint 'paths' heading up the hill but nothing that seemed like a well trodden route. Checked the GPS at one point and confirmed I was still on the path marked on my printed map, but eventually just turned to head up the hill initially following an old fence then continuing straight up. The ground was soft in places but really not too boggy and I could just about make out a path in places. The summit cloud disappeared as I rounded the shoulder of this hill I've seen described as a 'grassy lump'. As I neared the last part of my ascent, path disappearing again, I figured as long as I was heading up then that was the right direction... so picked my way around the snow patches and climbed up the rocks 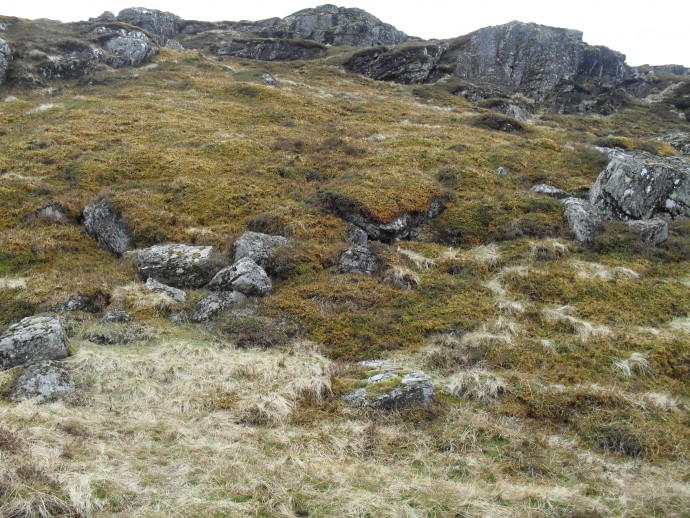 Made it to the summit and before I'd taken my second photo another climber arrived!

I hadn't spotted anyone else on the hill and had taken plenty photos of views behind me. Of course he had taken the more direct route rather than my (more interesting!) skirt around to climb the rocks.

As we stopped for a blether the clag came in quickly and views disappeared. clag comes down at the summit

Chatted to my fellow summiter and talked myself out of carrying on for the Corbett - getting later and poor visibility meant I was happy to just head back down the path I'd missed on the way up.

Definitely more boggy this way though.

The Welsh physio stayed at the summit for a few minutes longer as he was hoping the clag would soon clear again. 1.5 months in to his 4 months off work, he's cycling and camping, working his way around all the Munros - this was no. 86 for him.

as he left me for standing

From the top the path back was much easier to spot and the clag soon lifted. Looking back I could see how far round I'd gone to get up there, but on a clear day like this it was pretty straightforward just heading up the hill not being too concerned with staying on a path. looking back to summit

Re: Playing it safe on Meall Ghaordaidh

Nice report Fi. I climbed this one a couple of months back and took the same "path" as you up the fence line by the looks of it. It was my second attempt as I had to turn back in deep snow the first time!