Munros included on this walk: Am Basteir, Bruach na Frìthe

our_route.gpx Open full screen  NB: Walkhighlands is not responsible for the accuracy of gpx files in users posts
My first Skye Munro. Shortly followed by a very tricky ascent on to my 2nd, Am Basteir. And what a peak it is. After the incessant downpour on the Sunday, where I had made two meals for the incoming chaps, read the papers, bought gifts and got a nice fire going, I was really ready for the Cuillin. Our plan had been to take in Bruach Na Frithe using the tourist approach as none of us had been on the Cuillin before and we set off with vigour, vim and vitality. We come, we see, we climb - veni, vidi, vavavoom. The path across to the Bealach a Mhaim was great and afforded us a quick romp over to the Fionn Choire. Darren gazes up towards Fionn Choire I stride on towards Bruach

Scott pummelled his way up to 600m and we all huffed and puffed - he is a fell-runner and his fitness is to be witnessed. We then made our way on to the ridge and began the climb, just as the weather cleared and afforded us our first proper views of the Cuillin. It was dramatic and we were all stunned with concomitant gasps all round. As the ridge narrowed and became more exposed, our sense of fun grew. The views open out and mini-men ascend 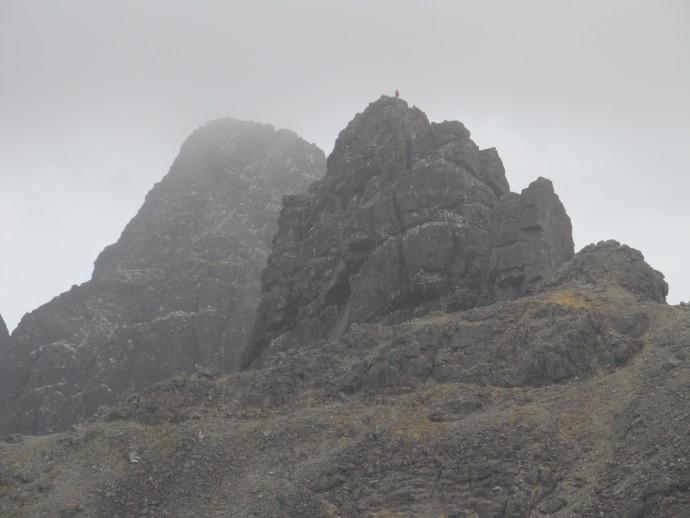 Am Basteir with Sgurr nan Gillean behind it

We could now see Am Basteir, and tiny Lego climbers who were dwarfed by the peaks. There had been nothing like this in all my Munro days. It really was that fabulous. We topped out at the trig point and had some lunch away from some miserable folk who never bothered to say hello - even Darren was embarrassed. Derek on the other hand stared at them until someone said 'hi'. Thattaboy. Rather than return the way we came, we meandered over to Sgurr a Fionn Coire and climbed that. Daz was keen to add in Am Basteir - I wondered how though? It looked like an overhang on to the Basteir tooth - not a chance without ropes. Am Basteir looks even more impressive Darren jumps down off the Munro Top - nice

However, we dropped on to the Bealach nan Lice and cut down steep scree slopes to the South of our intended peak. This entailed a re-ascent over a very awkward and exposed 'chimney' - it took us about 20 minutes to get up this and at one point, both Darren and Derek were on very exposed holds. Me on the relatively exposed 'chimney'

For a moment, I had a terrible thought that one or both would slip and how would I explain it to their respective partners, if that happened. I suppose in retrospect I was being a little negative but I have memories of someone who slipped in a more benign area and didn't survive to tell the tale. I suppose I've been relatively conservative since then but I make no apologies for it. We managed to scramble up in a rather untechnical fashion though and our subsequent ascent on to Am Basteir was exhilarating. The summit is very isolated and no place for those without a head for heights. Looking back down from the airy summit of Am Basteir Our return was via the Basteir gorge though not before Daz and Scott had a look at the Western face of Sgurr nan Gillean. I told them to go for it but it looked impossible to me and I stated so. I had decided we had been lucky enough with the scramble and was happy to head down. Not long after, Darren and Scott joined me at the base of the corrie, noting that it was not possible without a rope and our subsequent return to the car was quick, although both Scott and I did managed to hide in a cave and scare the sh*t out of Derek. Much fun. It had been quite an introduction to the Skye Munros and I had got the Cuillin bug. No vaccine required thanks.

Nice one Kev. Snow and ice on top on Friday so we didnt mange these. Gives an excuse to return though

well done kev, great hand on approach and you got your rewards. im not anti guides but its so much more rewarding when you do it yourself. well done

Enjoyed that Kev - did the same route many years ago with a bit of snow under foot and had to give up on Am Basteir's bad step, so well done. Gives me the appetite to return

Great stuff Kev. That upclimb was a little 'on the edge' there is no doubt about that. Good fun though