A glorious day, with the weather forecast claiming ZERO chance of any hazards other than sunburn... Decided to make the most of our first day in the Lakes in case the weather didn't last (snow is forecast for Monday...) Looking down Mitredale to the sea

After walking over to Mitredale from our base in Eskdale Green, the walk starts off through a forest. I was a bit concerned that this would be one of those dark and lifeless conifer plantations, but it was actually a very pleasant broadleaf plantation, at least initially. Mitredale Forest - setting off up towards the ridge

After a little while the forest did become conifer, but even then the clearing for the path was wide enough to let in lots of light. 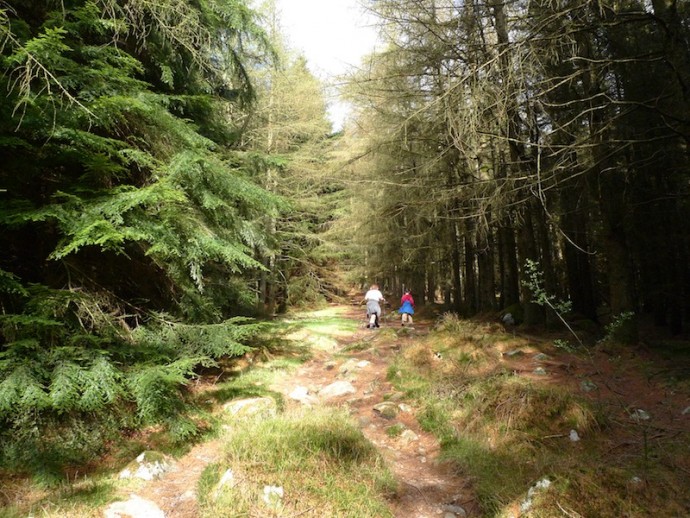 Near the top of the ridge the forest is being harvested and will be replaced with broadleaf. 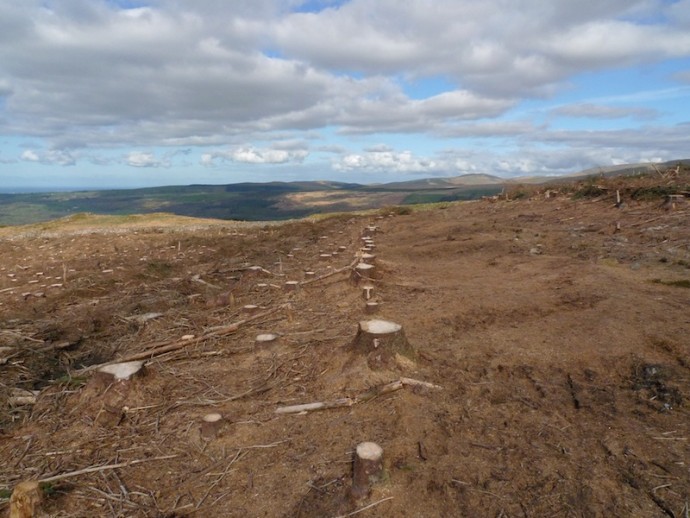 Soon we reached the ridge, and were rewarded with some fine views. The climb up the ridge to Whin Rigg was easy walking on a lovely grassy path. Every so often glimpses of WastWater come into view far below at the foot of the screes. Looking back to Whin Rigg from the ridge

We had been fooled by the weather forecast into travelling light, without waterproofs, and were now starting to regret it, both because of the wind (which was cold, even at this relatively low altitude) and the clouds approaching from the Scafell direction which looked like they might be carrying rain. Fortunately no rain materialized. From the summit of Illgill Head the views are spectacular, and they become more spectacular still if you walk 35 yards west to the edge of the drop to WastWater (walking 40 yards rather than 35 is NOT recommended) From the summit we descended to the pass near Burnmoor tarn, and then along the back of Illgill Head into Mitredale. A lot of the paths in this area are closed for forestry operations, and we ended up diverted through a very muddy cowfield and then through a farmyard where our path was blocked by a very large pig fast asleep against the gate. Eventually the owner turned up and shooed the pig away so that we could continue. A long but easy walk down the track and then the road to Mitredale where we had started, and back to Eskdale Green just in time to get ice creams (and supplies for tomorrow's expedition) from the shop before it closed.

Enjoyed the report Richard and some nice pictures and views. Looked like a good day out!!

Staying in a cottage at Eskdale Green for a week in July. Certainly be doing that walk.

That looked a good walk and some fabulous views

We're staying in Wasdale at the end of July so, something my husband and elder daughter can do

That looks a very pleasant route with plenty of variety. I can imagine the arrival at the edge of the screes after the relatively gentle climb onto Whinn Rigg must have been spectacular.

Two of the fifteen Wainwrights I've yet to do, and two I'm really looking forward to.

What a lovely walk in beautiful surroundings, some cracking pics in here too

Thanks for the report. I'm thinking of these 2 as my last 2 Wainwrights (only 7 to go) and that route is definitely favoured as there's nowhere to fall off once I've had my celebratory champagne (provided I don't turn left off the top of Illgill Head!) - I'll try and avoid the field with the pig though.