Getting a cold on Friday is just cruel,

so my plan to camp all weekend did not work out...saying that..high winds and arctic temperatures and rain on Friday evening didn't help either. Nursing myself with fresh orange juice all weekend I was finally down to a cough which made me sound like chain smoker in the morning,

but decided that it would not ruin my weekend any longer and that I would try to walk the stupid cold off!

Beinn Achaladair and Beinn a'Chreachain was a pair I had my eyes on for a while and so after quickly packing the bags we head up north by 9am.

The walk is done in a round, which is great and I opted for the long walk in first - good warm up and be to
honest I don't like long walk outs at the end. The small dirt road to the car park was easy to find - but probably also easy to miss and we parked the car at the farm and the old tower.
We left the car and making our way through a field of cows and sheep. Walking through farm animals never bothered me and my cough fits made sure the animals kept their distance.

From there it was a pleasant easy walk along a burn. Cows on the way Even though the path continues east you will come across a sign which indicates to the path up the hill and you will only need to follow the signposts up the hill. As the day was beautiful and sunny we were soon in T-shirts ..summer at last! 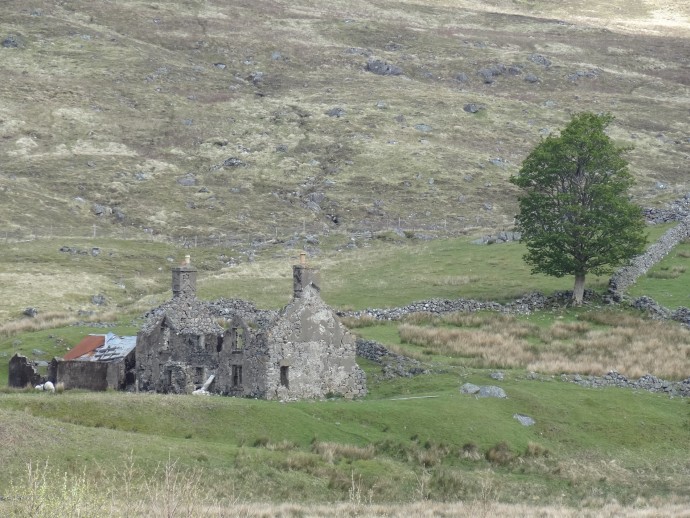 old ruin on the way The path looking back 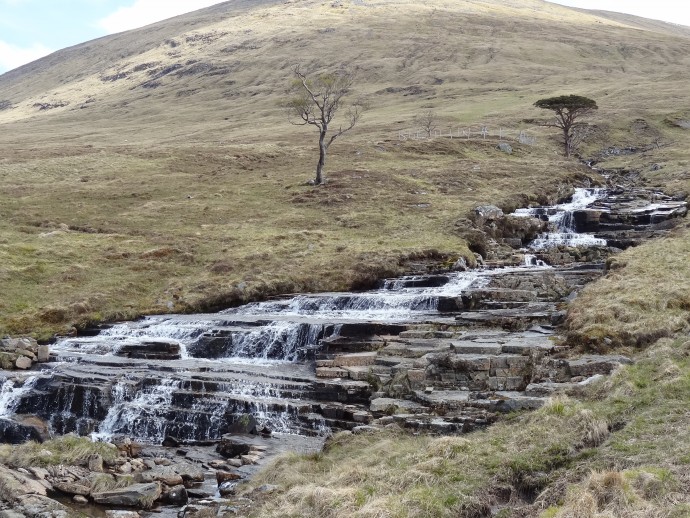 On the way up the gully with the loch behind me

The walk up the hill along the burn is pretty and easy and reaching the loch we took another break.
The suggested route up Beinn a'Chreachain is by following a faint path to the left hand site of the loch, but
I had decided on the quicker way up and so we walked around the loch and made our way up the left gully.
A lot less exiting than I hoped for (maybe getting too used to gullies? ) but a lot quicker indeed.

Reaching the top we turned left and walked up to the summit cairn. Sitting down and enjoying the views we saw that Ben Nevis and the Cairngorms were still covered in a lot of snow and the views were superb.
After about 20 min we were joined by another couple who were kind enough to share a wee dram of malt with us

(mental note to self - bring hip flask next time)

After chatting to them we said our good byes and a wee while after they left we followed the path up to Beinn Achaladair. Walking up to Beinn Achaladair was pretty easy and finally I felt that all the hillwalking had paid off and my
hill fitness was back in track (even with a cough and a cold)...on the other hand Marco felt what it means not to go hillwalking for a month...(the revenge of the mountains when you abandon them

and he was struggling behind me.

As it started to become a joke between us that he is always the one who complains on the way up mountains, I told him (in Billy Connelys style) that I would bite his bum if we would not shut up moaning.

I don't think he expected me to stick to my words...as a few minutes later I did what I treated to do. One feels the pain With a grin on my face I walked on, listening to the curses of revenge behind me. Afterwards it was not long until we reached the top of Beinn Achaladair. From the top you can either walk along the path and follow the burn back, or walk down until you reach the shoulder and head straight down to the farm.

Again we opted for the quickest route down, which was indeed a knee killer but with the advantage to loose height quickly.There is no path to follow but on a clear day it is pretty easy and straightforward. We reached the car 7.5h after leaving it and with all the long breaks it felt like 2 pretty easy Munros to climb. Beinn Achaladair in the distance Nice one. I did these in similar weather, had a couple of beers in my bag. Sat on the flat ridge looking over Rannoch & had a cold one bliss

Nice walk this, was my 1st winter walk few years back.

Hope your cold has cleared and your camping agin soon.

I was wild camping in the Fisherfields all weekend...bloody cold it was!!!!

jonny616 wrote:Nice one. I did these in similar weather, had a couple of beers in my bag. Sat on the flat ridge looking over Rannoch & had a cold one bliss

A cold beer on top of a Munro...there is nothing better!! Wish they could invent a can which stays cold (like the cans of coffee which get hot) Saying that havent seen them for ages!!

Nice walk this, was my 1st winter walk few years back.
Hope your cold has cleared and your camping agin soon.
I was wild camping in the Fisherfields all weekend...bloody cold it was!!!!

Wild camping sounds great ...but not so much fun in the cold! If weather holds I am away for a week next week..keeping all fingers and toes crossed!!

Bum-biting, bikinis - just where do you go from here?

Nice report Mountainlive. Love the two early photos with the trees. Bikinis, Bum biting, whatever next

kevsbald wrote:Bum-biting, bikinis - just where do you go from here?

Lol not planning anything, but off a week camping and hillwalking by myself up north from this weekend...Thats everyone been warned