we decided for a ben cruachan ridge walk very spontenously - while laying in bed and making plans for the weekend (weather permits).. i thought about glencoe, of course, but couldnt be bothered to drive all the same way all the time and as the days are nice and long i was keen on a nice and long walk. 'let's do cruachan' i said and my partner just agreed

later she saw a route profile and had some doubts about 'so much up and so much down' but never really said we should reconsider... therefore ben cruachan it was

we invited our 2 'best trip mates' to join us...
saturday 7am we left edinburgh. when we reached dalmally the sun was already up and hot. we were tempted to leave a car at the power station at loch awe but then saw couple of cars parked just at the stairs to the train station. there is enough shoulder to accomodate 6-8 cars, it also is wide enough to serve as an ample car park.
after applying thick layer of sun screen we left towards the adventure.

so, towards the stairs to the pass under the rail tracks (mind yeeer head) then few more steps and the path begins. at first the path goes via old woodland and as the day was nice and bright - i really liked that - old oak trees, lovely juicy green leaves, smell of flowers. there is a couple of small viewpoints along- to loch awe. then the path steepened and instead of high oaks and birches, it leaded via open, low woodland. the path was very narrow and the branches were brushing us hard (we remembered to check ourselves later on in case we had any ticks, as it was that sort of environment that ticks like the most)

after about 45mins we arrived to the edge of the woodland and had a very tricky, wobbly, high stile/ladder to cross over the fence. 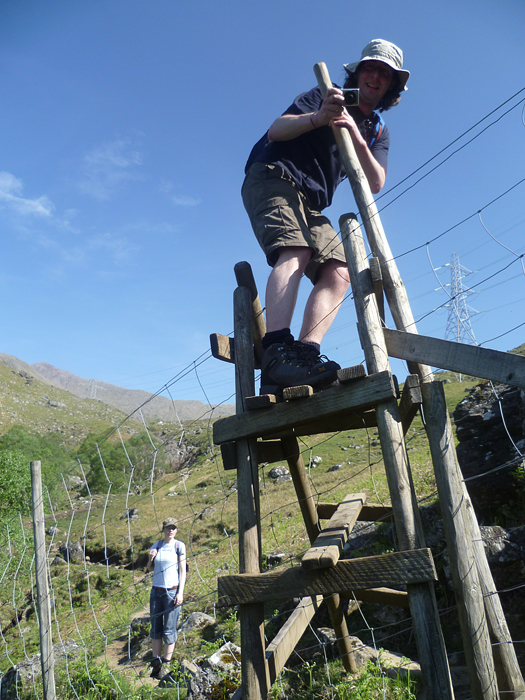 it was ok but i guess in some time it will just collapse with somebody on it, as it was quite wobbly and not properly attached to the ground either.. so beware guys

however there is an alternative to the ladder/stiles, just on the right hand side - a gap in the fence -animal pass. it is big enough for a person to go thru (checked) so if you dont feel comfortable with the ladder/stile, you can easily use that option.

anyway, after passing the first obstacle we walked further, along the stream which we decided we will enjoy on our way back

after further 20 mins we reached the dam.

the dam on cruachan reservoir 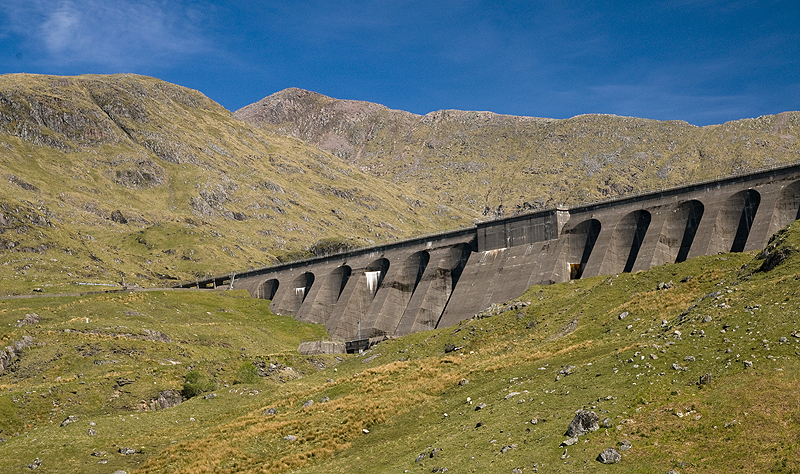 i knew about the dam and power station and pylons but still i felt a little bit dissapointed with the lack of wilderness. of course comparing with the cairnwell munros we walked earlier in the year, the cruachan reservoir area seemed to be never touched by humans

but i just felt that this place would have so much more potential and atmosphere and magic without all the iron and concrete work.. 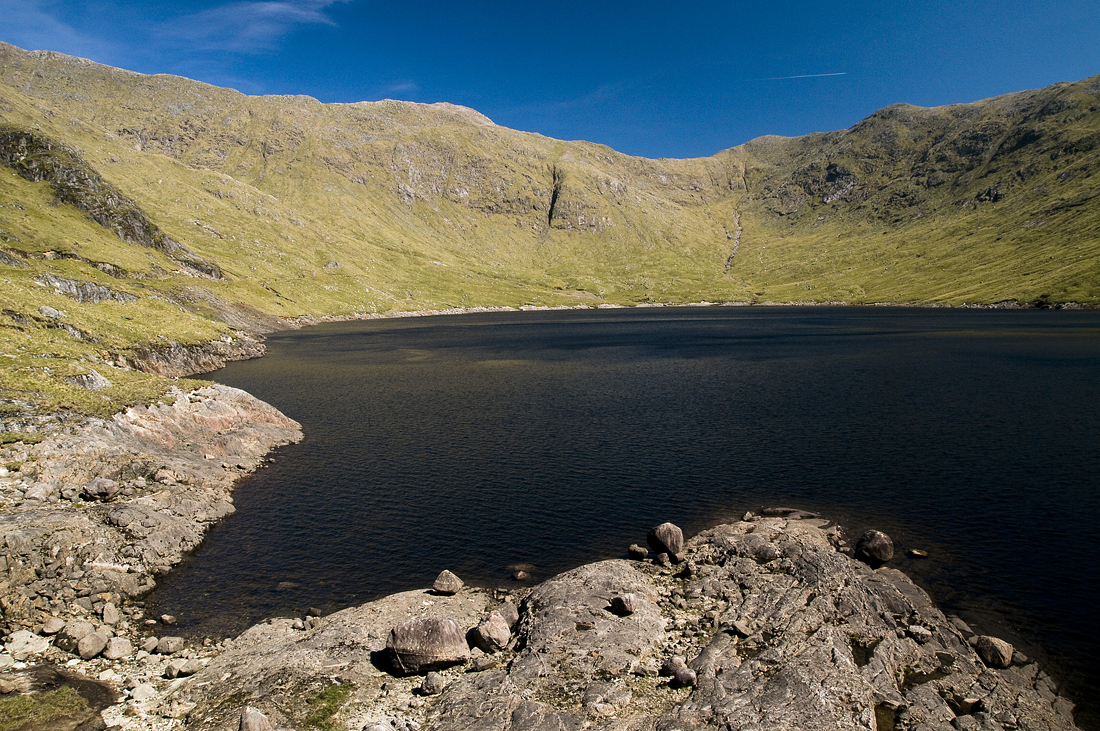 'amazing!!!' i thought, but then i added 'but pictures will be boring, lacking the clouds!'. well, there always is something to complain about

we walked the dam (to the left) and noticed a donation point for oban mountain rescue team. 'we'd better donate, who knows, we might need them one day'. the donation box also marks the beginning of the path going along the west bank of cruachan reservoir. the path soon joins the track.

the track along cruachan reservoir 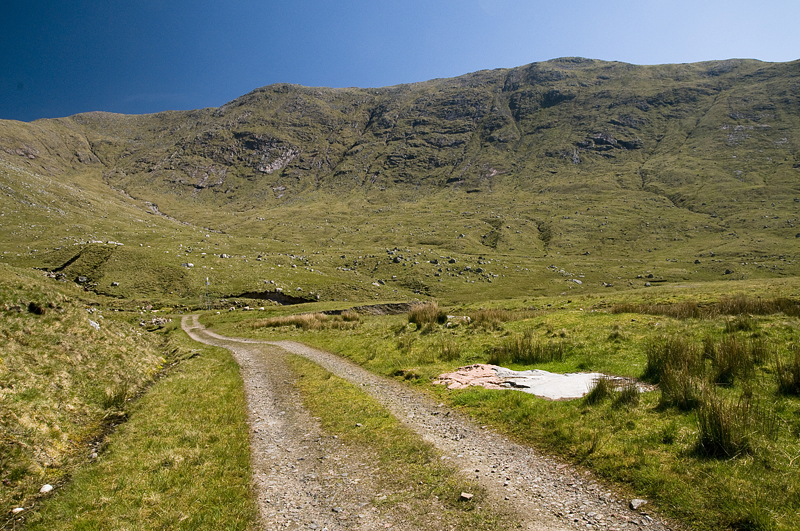 i liked that bit - after quite a steep ascent to the dam there was a nice flat moment which allowed us to rest a little and gather our strength before the proper ascent to ben cruachan.
where to leave the track and start ascent? easy to find - the place is marked with 'not such small' cairn and a big stony arrow (still, if you're me, you can almost miss it hahaha), just before the end of the reservoir.

the arrow, leave the track here 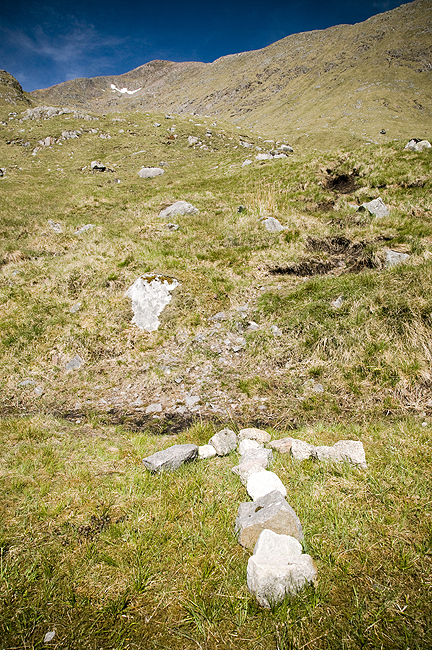 after leaving the track we found ourselves walking a grassy slope which in 'normal conditions' would be quite boggy, but the weather gods were good to us and as it hadnt rained for more than a week now, the grass was dry and crunched under our boots. nice

soon the path joined a small stream with a series of tiny waterfalls... 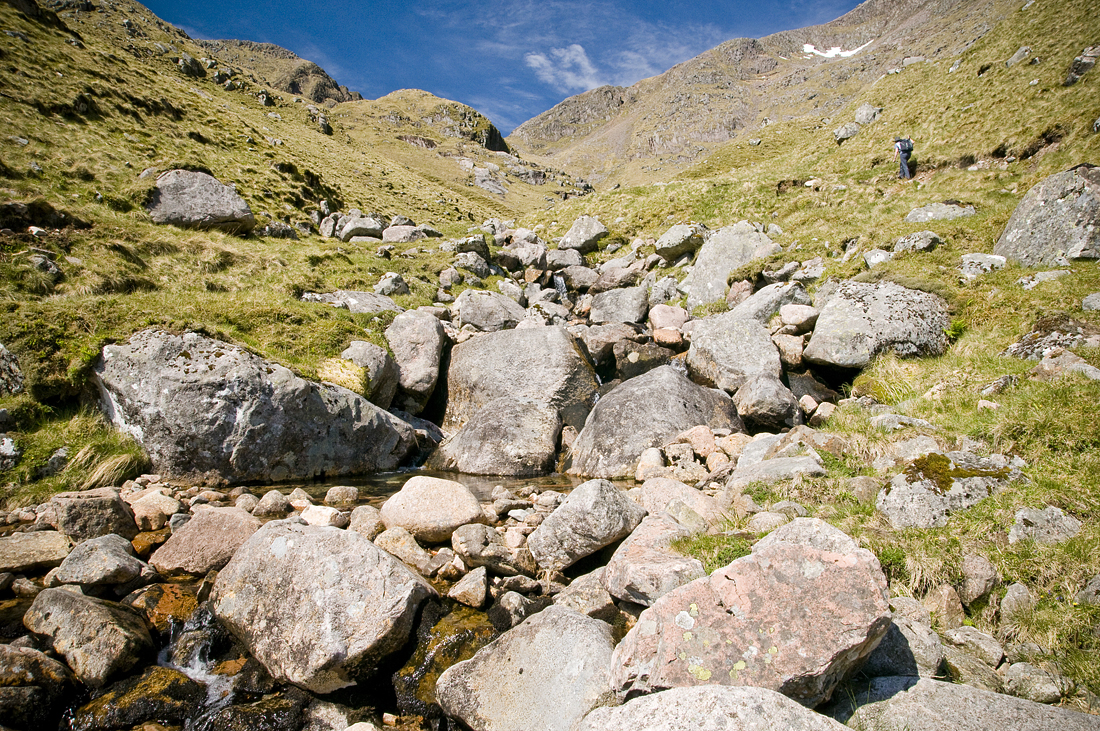 ..then crossed it and led us up to the coire dearg

from here it was only a matter of climbing steep slopes towards bealach an lochain. it wasnt that easy: first- that was a steep bit, second - path was made of small, scattered rocks, loose and escaping from under the soles. not very pleasant ascent, i must admit. with a little bit of wind- all the tiny drops of sand and dust ended up in my eyes.

anyway, soon we reached bealach an lochain (with views to meall cuanail) 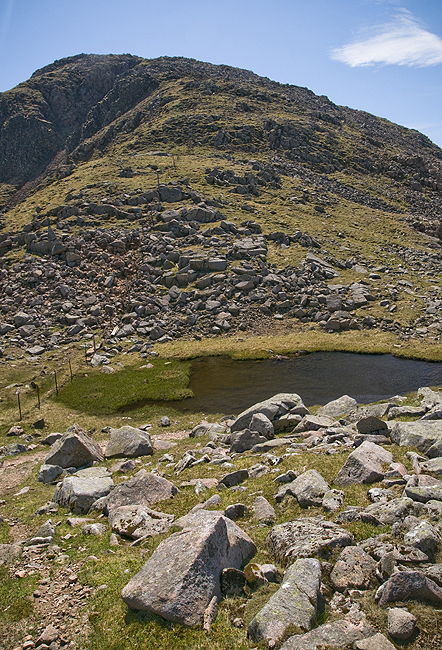 here we had a small break, enjoyed the views and continued up towards the summit of ben cruachan

looking back towards the reservoir 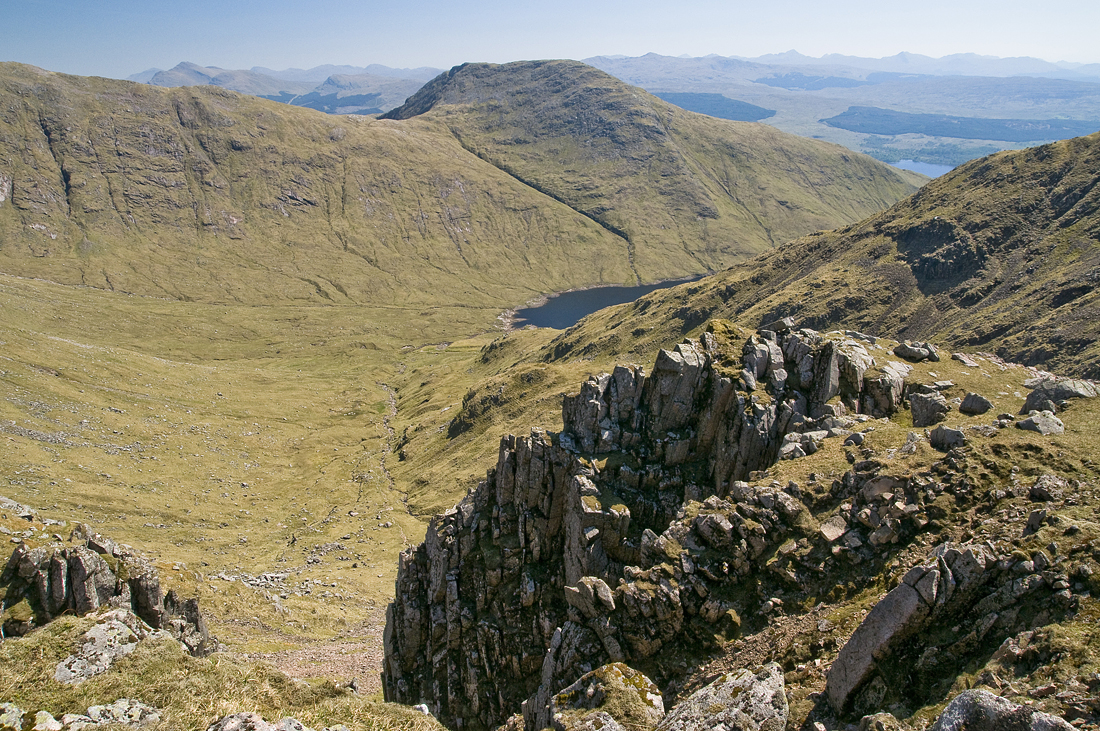 we stopped just below the summit to have some lunch and a noon nap on the warm grass- we werent in any hurry, so we made sure we enjoyed every minute of the day. 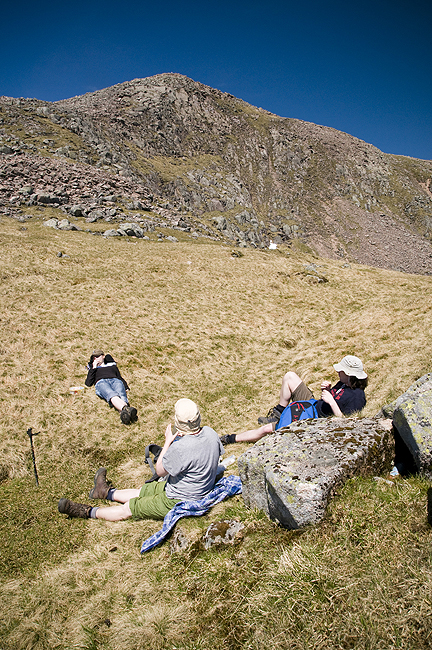 soon we were back on track and continued towards the summit. about 1/3 way up the path dissapeares and you have to make your way thru the rocks. this time the rocks are bigger and easier to walk on but still you have to give so much attention to where you put your feet that you forget about the tiredness. 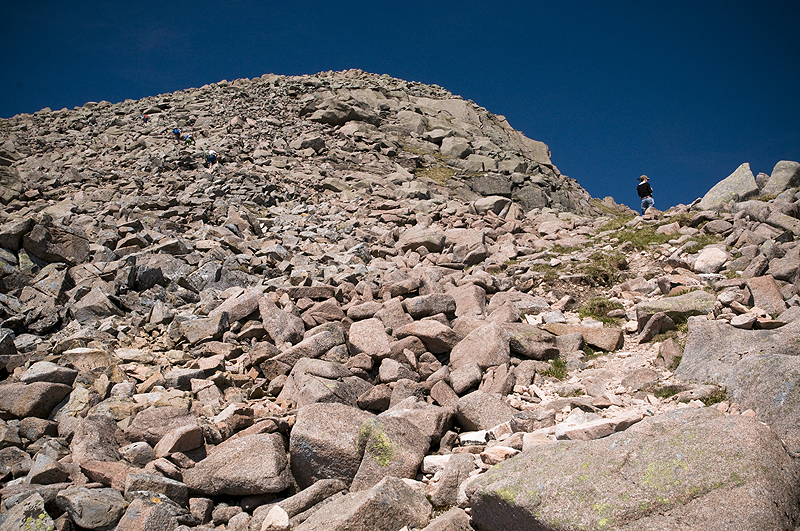 we reached the summit of our first munro of the day -ben cruachan about 4hrs after we left the car (but as i said, we took our time). views were spectacular (but again i missed some dramatic clouds...). from the summit we could see as far as ben more (on mull), mountains of arran, glen etive, ben starav, mountains of glencoe, ben nevis, rannoch moor, ben lui, arrochar alps... 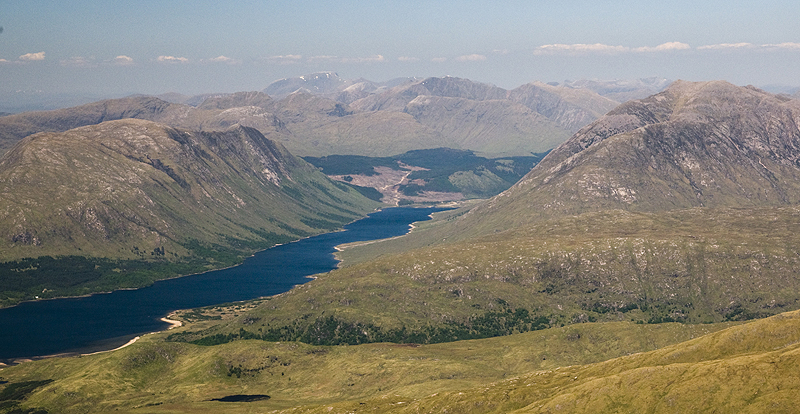 looking west towards the ridge 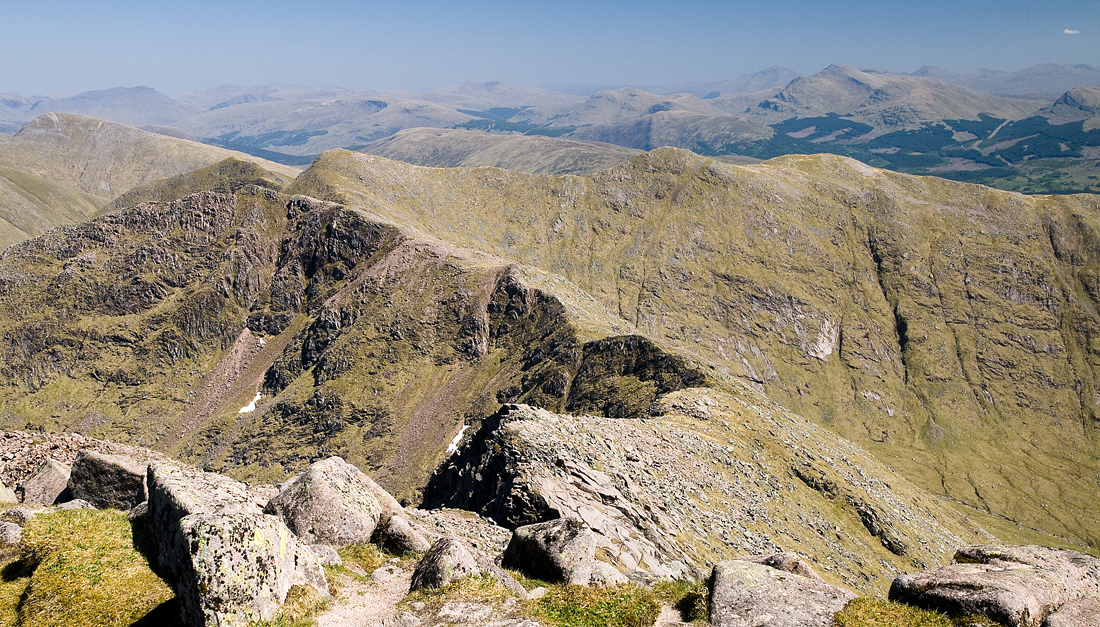 down to cruachan reservoir and loch awe 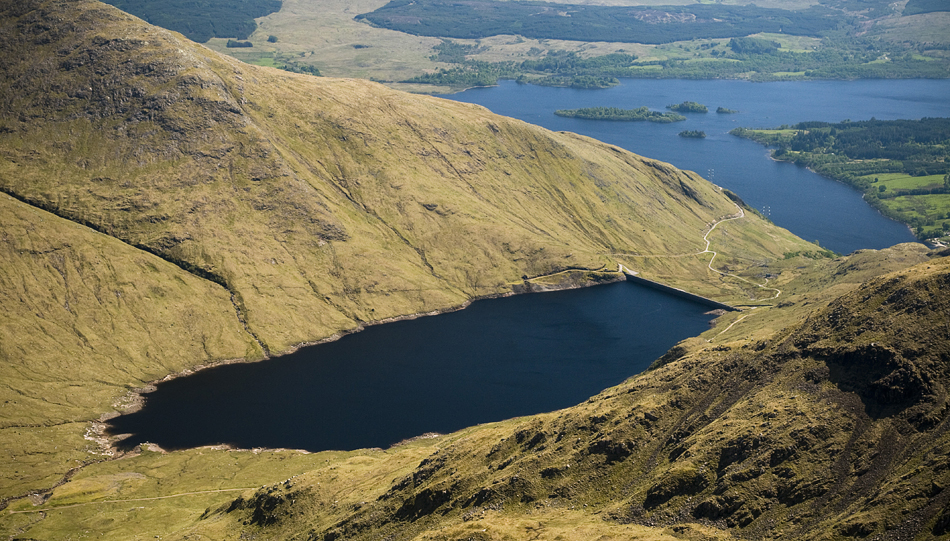 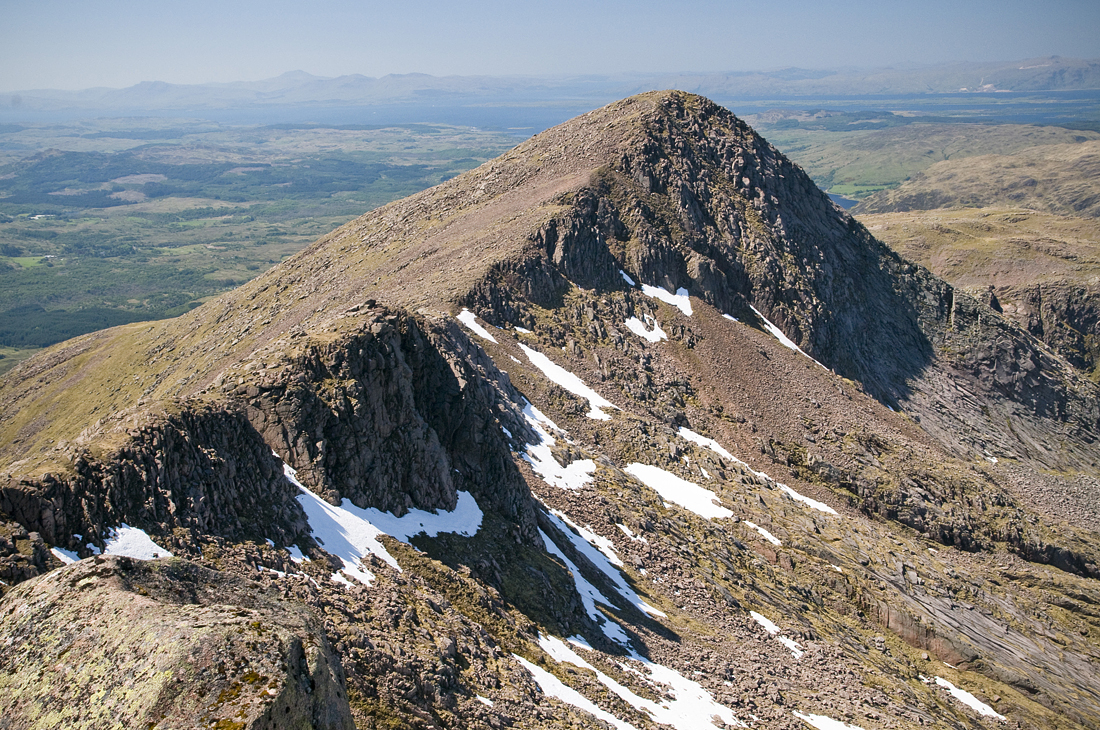 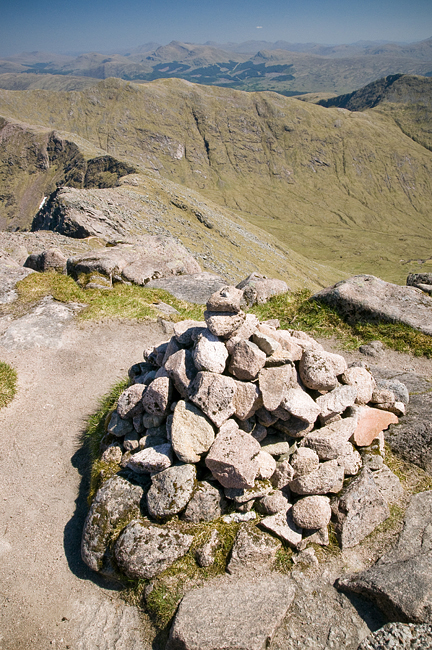 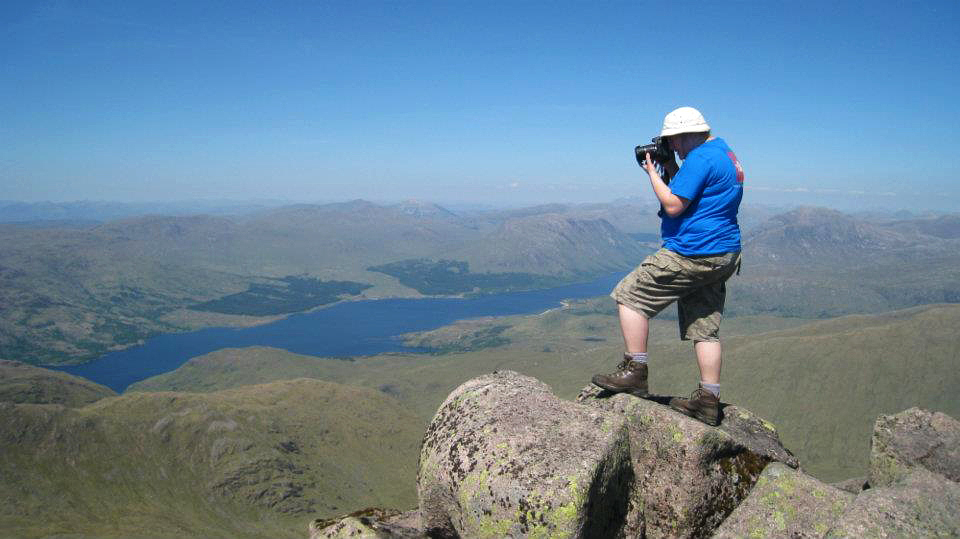 after few minutes of rest, few drops of water.. we decided to move on and walked towards the famous slabs 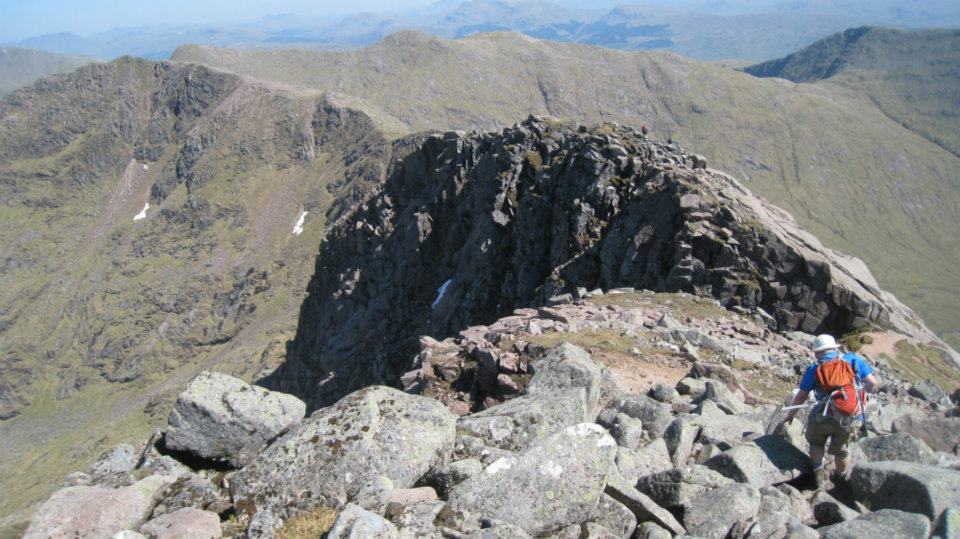 here you go, the slabs. from afar they look tiny, from closer they look massive at first i tried to tackle them straight up front, but soon realised that my boots might not cope with its steepness and plainness. i walked around and discovered that few metres further there is a very easy route up them - stairs actually.

on top of the slabs 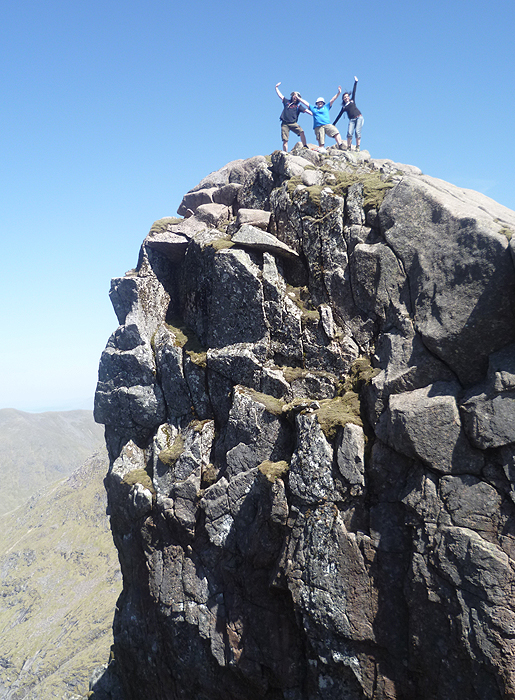 i read that i have 2 options from this point -either go down and follow lower path along the ridge or continue the upper way -up the slabs - which i did (and it was very easy). 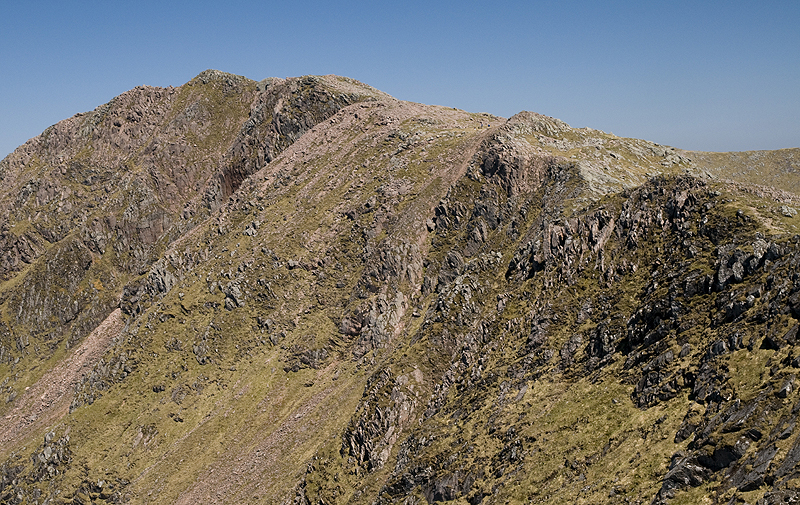 ridge walk was very nice and easy, we reached drochaid ghlas in no time

looking back to ben cruachan 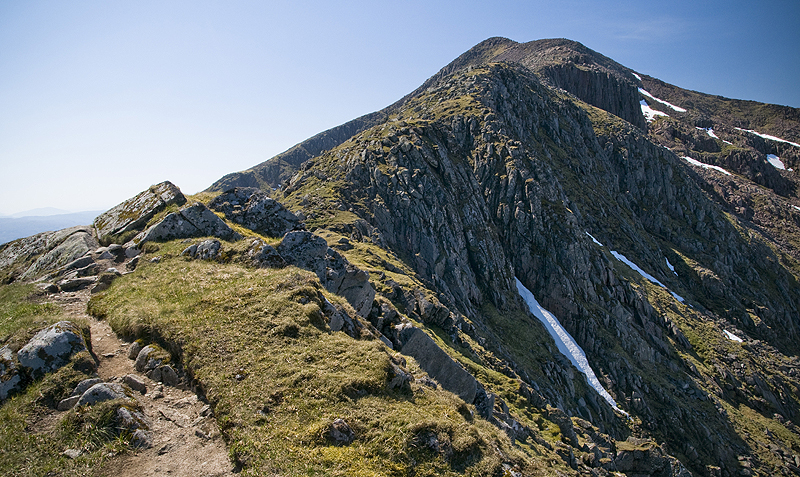 our next aim was the second munro of the day -stob diamh. it was an efford this time. the day was hot, we were tired already and the ascent was longer than i expected 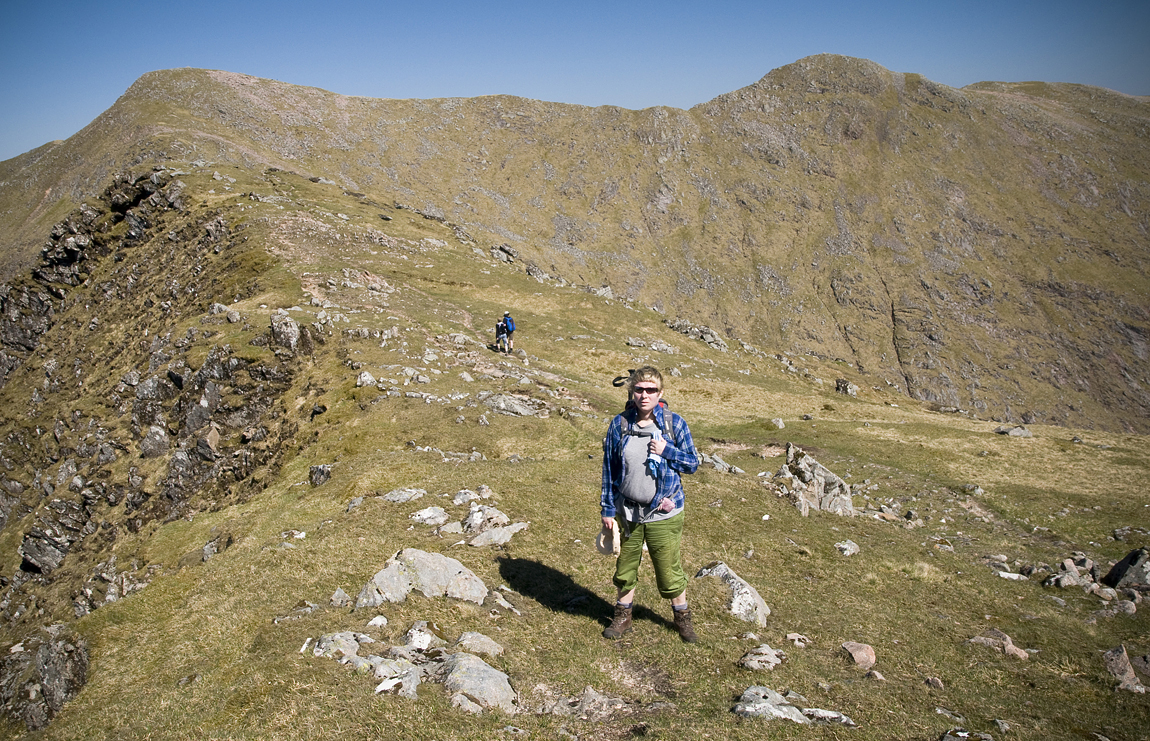 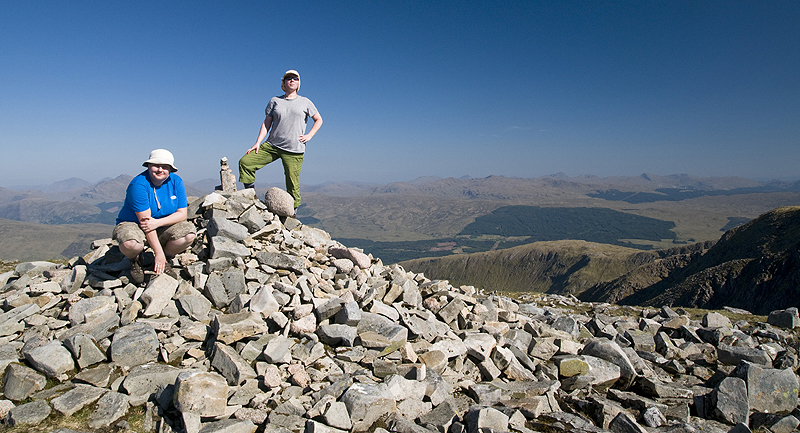 next summit along the ridge, the last one was stob garbh 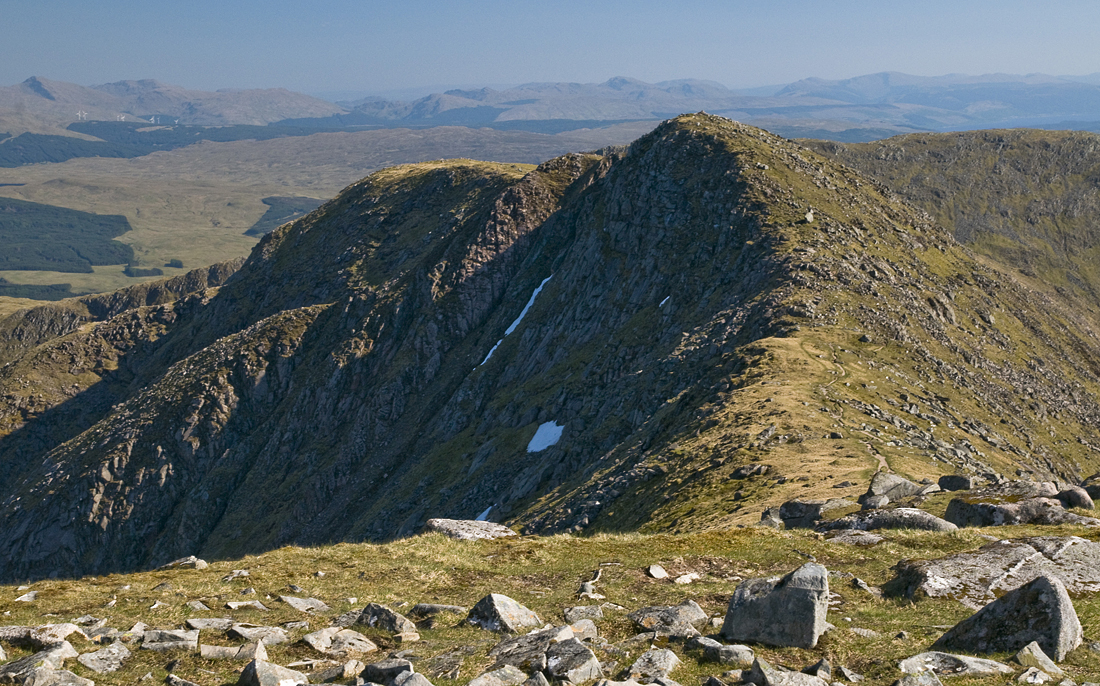 that was an easy one, we passed it quickly and continued towards lairig torran

looking back to stob diamh 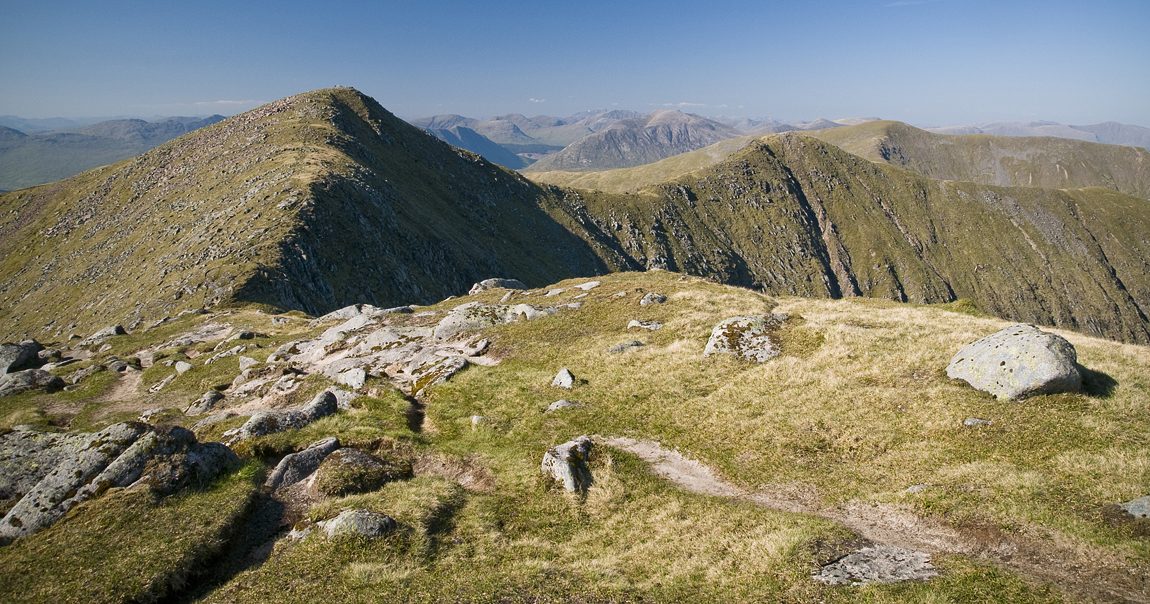 the two possible routes of descent are: 1. along the path which starts at stob garbh or 2. along lairig torran. WH advises to take the lairig torran descent. i found this way longer and very boggy, again -in 'normal conditions' it would be a swamp. the descent path going from stob garbh was well defined and dry (from what i saw) and i would recommend this one. 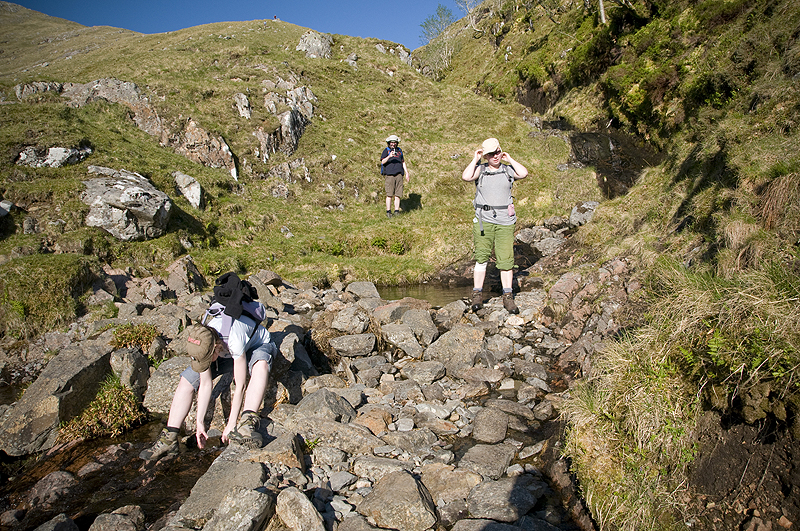 ben cruachan & reservoir from 'almost the bottom' of lairig torran 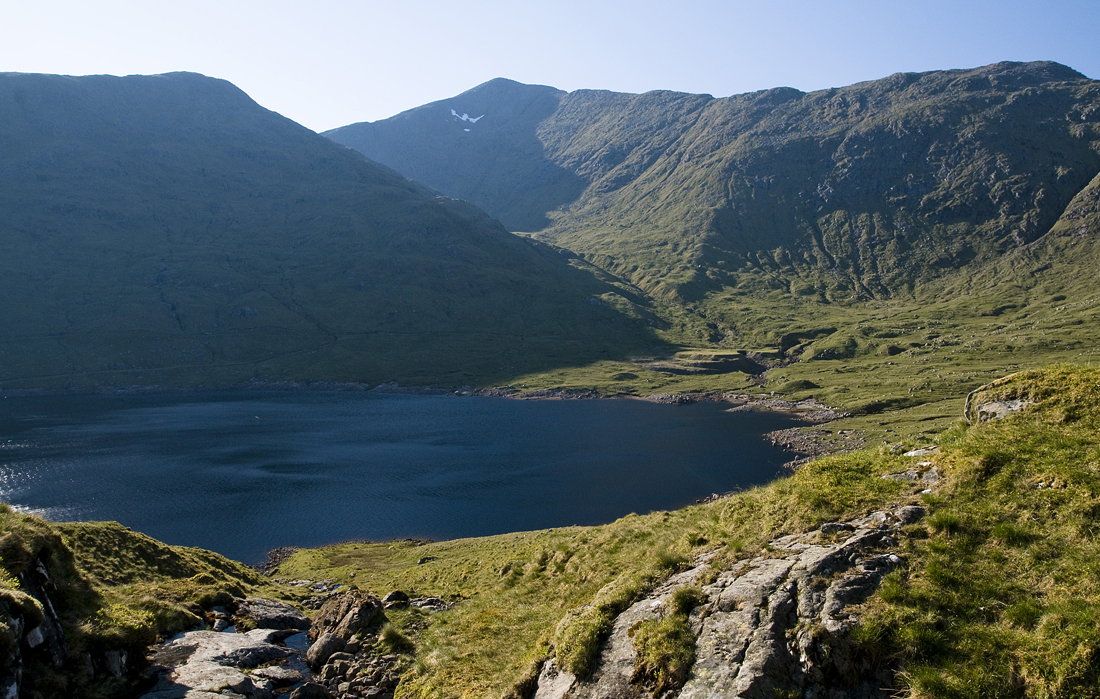 anyway, the two routes met about 2/3 way down to the reservoir. from here, the path was flatter, easier to follow and walk for our tired feet. another 15 mins and we were back at the dam, then the wobbly stile/ladder, woodland and the car park. in the meantime, as we planned, we had a break at the stream, put our knackered feet to cold water. such a great idea it was! recomment it very much

i was VERY VERY VERY glad to be down, at last. after the 10 hrs of walk in hot sunshine i was exhausted, but happy. the car was like an oven

on our way back we stopped in the best feeding parlour in argyle - tyndrum 'real food'. unfortunately, midges stopped there too, we had to crowd inside.

NICE ONE, but omg, such a killer of a walk!

Loved that Blueyed. Its seems such an age since I was up there. Just superb photos with fantastic views.

Great report. We were 'next door' cooking on Beinn a'Chochuill and Beinn Eunaich on Saturday using the views of Cruachan as an excuse to stop. Been a long time since I was last up there but your photos have inspired me to return again. Perhaps when the temperature is not oven ready

I done this two weeks ago, oh my god was i sore at the end of it lol ..... what a fantastic climb though, well done

Love the depth of blue in the sky - are you using a polarised filter?

Nice one blueyed. A terrific report - one of the best on these two hills. Have been pondering when to do this pair - think it will be sooner than later, hopefully on a decent day like you guys. I'll come back to this report when i do, some great pointers on how to tackle them. Well done

fantastic photos and a cracking report throughout, love the noon nap on the warm grass.....that's my kind of hiking

Great report and pics. Sorry to be picky but isn't the photo before the cairn "Looking East along the ridge"?
I was a bit confused at first

To do all the tops in a day is a huge undertaking. I went anticlockwise from the dam doing Stob Diamh first. Long way round to the main top and I felt too tired to do either the Taynuilt peak (Stob Dearg) or the other top Meall Cuanail but I plan to go back for them.