Liathach had been on the radar for a while. Plans were made with Rocket Ron and Iain Watson. Books were read, reports online were read. Two of the 3 didn't like exposure, this could be interesting!

Iain collected me at 0600hrs and we travelled up, making good progress, we hooked up with Ron at Inverness and by late morning we were at the foot of the hill. It was either 22 or 24 degrees at that time. Kit was ditched, extra fluids were loaded and sun block was applied.

Then it was onwards and upwards, the hill wasn't going to climb iteslf!

The route we took was the anticlockwise route doing Spidean a' Choire Leith
first. It was very steep and the dry heat (with not a breath of wind) made it hard going. Ron and Iain are fast walkers, I'm no slouch but they are in a different league! What followed, I cannot explain, I assume it is what an asthmatic experiences...when I breathe in it isn't enough, I still feel short of breath. This lasts for the first third of the ascent then it vannishes as suddenly as it arrived. 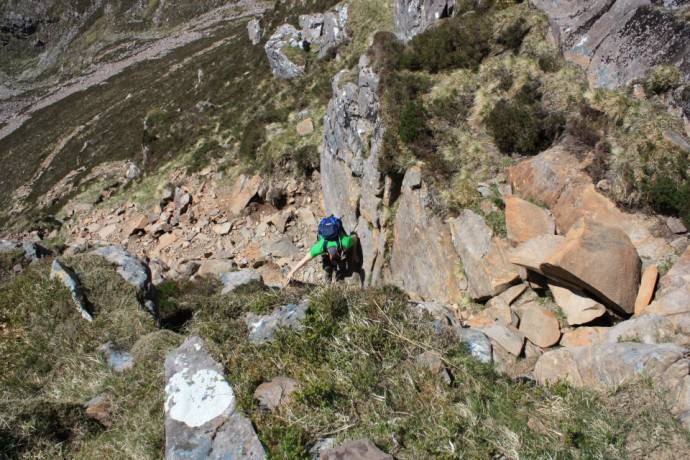 Eventually we reach the ridge and decide to have a stop to apply more factor 30. Ron balances on a column (on one foot at one point), Iain goes for a look but only displays an Elvis leg moment. I'm not even that brave, there will be more than enough exposure this weekend without looking for it. We go to the most easterly top (Stuc a' Choire Dhuibh Bhig) and get great views of Beinn Eighe. This is now on my "to do list". We head back to our bags and head up to the summit of Spidean a' Choire Leith without any difficulties. The views of the ridge and pinnacles is fantastic. A quick bite to eat, some pics and we are off again. I stow my pole on the back of my rucksack (tips down) to keep my hands free, should they be needed, more on this later.

To be clear, I don't like heights, they scare me, they make me physically dizzy. The reputation of this walk had made me nervous.

There is exposure here, you have to look at it, but you can choose to ignore it, shying away from it. I choose to look at it, I must get used to this stuff for my future plans to work. I have seen worse, I can do this. The climbing/scrambling isn't difficult, the rocks are grippy and you don't have to go to the very edge. The bypass isn't even contemplated by any of the three of us.

Sigh, then some stupidity...

So I'm downclimbing a column/pinnacle. I'm about 20m above the ridge, there is a vertical drop of approx 400m to the valley floor from the ridge. Ron is standing on the ridge below me (about 15-20m below me), there is a big drop to the valley floor next to him. Iain is around the corner taking pics. I'm on top of a step with a 6-8 foot drop to the next step below (which is a decent size). I decide to "dreep" down with my back to the column, I get as far as my hips when I realise my legs aren't long enough. I should push back up and turn to face the wall and downclimb properly....but, I'm too hot, too tired, too lazy...too stupid. I decide just to let myself drop to the step below. As I did that my rucksack and attached poles dug into the step pushing meout away from the rockface and also haviing the effect of bending me over. I landed on the very edge of the step below, my left toe on the edge (all my weight on my toes) and my right boot instep digging into the edge on the step. My body is bent over the edge, looking straight down to the ridge and the valley floor beyond. Cue some frantic arm waving, wobbling and swearing from me, my heart is in my mouth, my heart is racing. I manage to push back, eventually and stagger back against the rockface. I have to check to see if I have just "pat my shants". I go back to the edge and look down. Ron still looks shocked...then starts laughing. We both comment that it had been a close one! I limb down, telling myself that it hadn't really happened.... Lets move on, dwelling on it serves no purpose.... The "hee bee jee bees" are still with me as we move on. Where it nearly went wrong for me

The pinacles are over before we know it, sadly, then its up a broad(ish) ridge to the summit of Mullach an Rathain. The views to Beinn Alligin are amazing! It is added to the "to do" list. 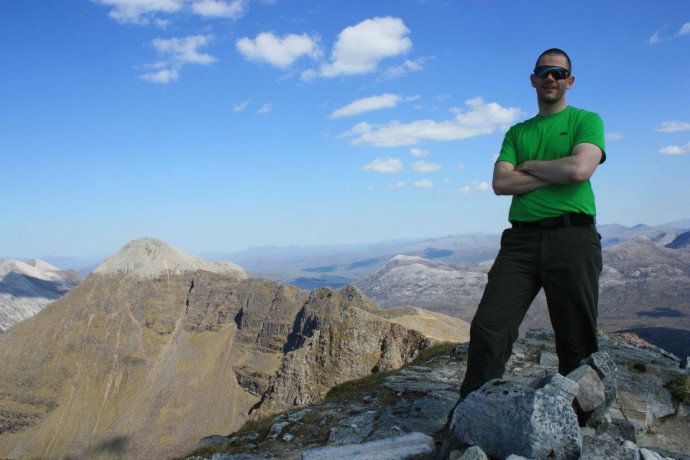 2nd munro with the days route behind

Some food is scoffed, some fluids taken in, some pics taken then it's off down a scree covered path.....ouchio! I don't think I'd ever climb up that way! The heat is intense, I'm cooked!

On the way down Ron uses his animal magnetism.... 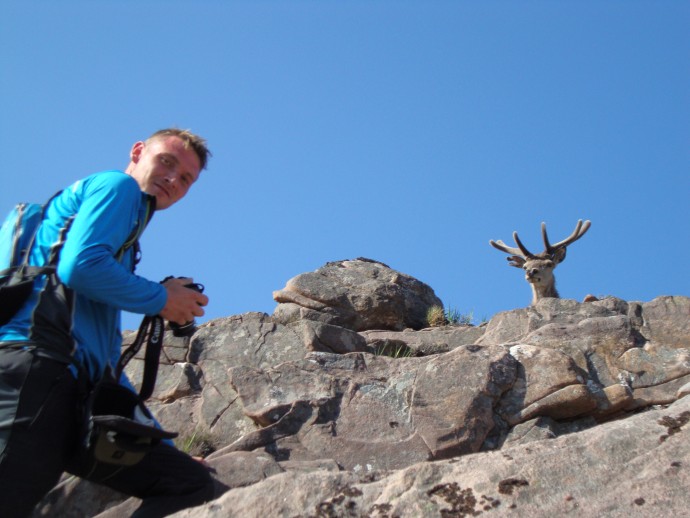 Then all too soon we are back at the road, it is boiling....scorchio!!!!

This wasn't a long or hard walk but the heat had left me cooked/burst, oh joy!

For those still to do this, the exposure is there if you want to go look, but it can be shyed away from on the ridge top. The climbing is easy, just one move requires a wee bit of care, but face the rock and you will be fine. The ridge felt shorter that the Aonach Eagach and less exposed. The climbing was easier too. As for the views.... they are totally different and I wil not say one is better than the other, they are both fantastic!

Get out there and do it!

As for that day, it wasn't over there....
It was back to Ron's via a dog pickup (Barney is magic!) and BBQ time!
Some had beer (that person may drink as fast as he walks), some had wine (a well deserved tonic after a hard day) and a weirdo had soft drinks in preparation for part 2... An Teallach, the following day....

Well done Sir , an excellent report ! Good to see that both you and your trousers survived the excitement intact

I'm glad you didn't find this too daunting , quite encouraging for folks like me who have this to look forward to

totally agree that most competent hillwalkers will have no issue with the pinnacles and id say the aonach eagach is way more exposed and requires much more care.

Near had a "pat in my pants" reading this,you give me hope when my turn comes.

Campbell excellant account of the day with excellent company cheers guys
yeah i do drink beer as fast as i can walk. Practise makes perfect

I will add a few more pics after my dinner. Am sure Iain will as well

Great report Meatball, looks like great day, and all the better with a little danger. Just hope I don't have any danger when I have to do this one

no danger meatball was just silly with his poles. But a lesson learnt

Hope part 2 is as good, glad you made to the ridge in one piece

Awesome report! Glad you managed to get back on the ledge and continue unharmed. Pictures are great; the one of the scruffy looking deer peeking over looking at you guys had me laugh

Was he all the way at the top?

The deer was near the bottom but it was really tame...that or it knew Ron?

What a report Campbell!!

Poles are fine...if you have any brains...unlike me!
You'll love these when you get there. Feel free to join us next time!