They say a week is a long time in ......... well most anything it seems? Been true of hill walking recently too. This is a report from a couple of weekends ago, when we were still seemingly in the grips of winter and Chelsea were storming to victory in the Champions League final

Slightly different report this one too, revolving around a night hike recently that I did with a group of work colleagues in aid of Maggies – a charity that provide support for people affected by cancer, their families, carers and friends.

I’ve done a Maggies challenge before – a bike and hike up the 75 miles of the Great Glen way a couple of years ago. It’s hard to describe (I’m a bloke and all that), but Maggies events will always be poignant for me. It wasn’t long after the bike and hike two years ago that that we discovered my mother had a tumour which was eventually to be her undoing, despite a brave battle on her part. While she didn’t benefit directly from the work of Maggies she did benefit from similar support where she lived and in some small way this is a chance for me to give a little back, even if it is in a different part of the UK.

So we were a team of five, with Sharon, Stuart, Marjory, Yvonne and myself taking part from the firm I work for. Ordinarily I probably wouldn’t post reports for charity events such as this, but I couldn’t let the efforts of my “team” on this one go unrecognised

Some of the photos of the event are courtesy of my team mates, as well from Maggies employees joining us on the walk too

So, what were my memories of a night hike on Ben Nevis.

Well as chauffeur I had the choice of music on the way to Fort William – it was my car after all. But after three tracks from the Felice Brothers even I decided to be kind to my passengers and turn it down

We were staying in a lodge at Moy Farm, which gave perfect views to Ben Nevis. And on Saturday morning we were greeted by blue skies giving perfect views of “the Ben”. 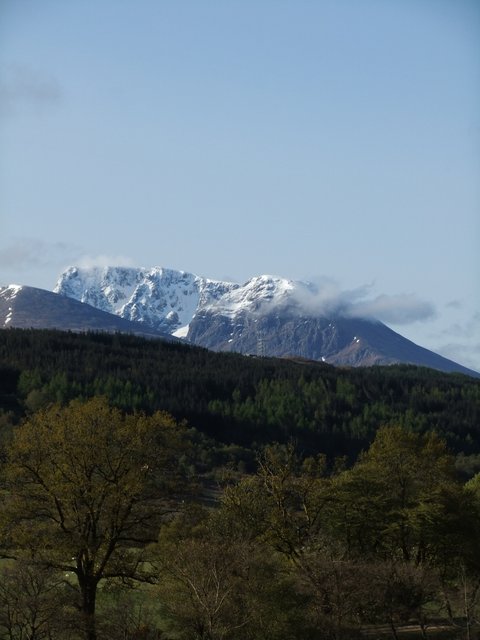 Nevis in the sun

That didn’t last long though as the cloud cover come in. 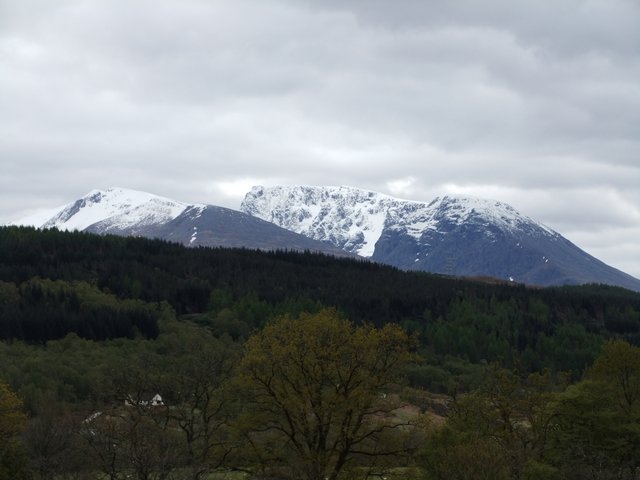 Nevis not so in the sun

Nerves’ were building as the day was spent “hill watching”, so it was a relief to be setting off for the Glen Nevis visitor centre. Not even Stuart being “educated” in the ways of The Voice (his resultant quote being along the lines of “this country is in so much trouble”) or Chelsea in the Champions League final could stop us so we were setting off a little earlier than we needed to the Glen Nevis visitor centre where we would be picking up the “donkey track” up to the summit.

) giggling hysterically with nerves as we drove into town. Goodness only knows what she was talking about

Entertaining all the same.

As you would expect, given the majority of participants weren’t hill walkers we were given a safety briefing before setting off (at 10.45 pm). The plan was that one of the three guides would walk with us until the half way point (The Red Bu rn) and if anyone at that point wanted to turn back they could with him. The rest would then continue to the summit.......and enjoy magnificent views from there as the sun rose 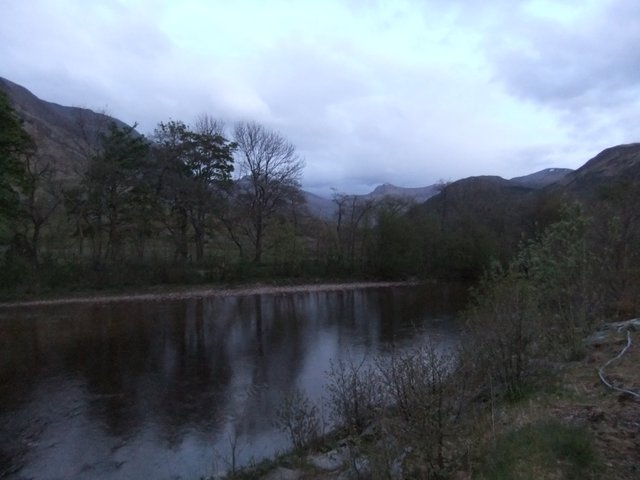 At the start - looking into Glen Nevis As for the walk – while I found it easy I know that some of the team found the path up a bit rougher than perhaps they had expected, with some big blocks to navigate over. It was just past the half way point and Red Burn that we hit the snow and ice......and then the clag

“interesting” for a night time walk up the hill

It was dark pretty soon after we started, so photo opportunities were rare. We did happen across a couple of sheep though, who seemed intrigued by these loonies and their head torches traipsing up the hill. Got one of the team very excited (for the sake of her anonymity we’ll call her Yvonne Once we hit the snow and ice the group was a bit spread out by now and it was at this stage we lost our one and only casualty of the trip (one of the Maggies crew who was walking with us wasn’t feeling too bright and had to turn back with one of our guides and head down). A real shame for them, but safety does have to come first, especially given the conditions we were enjoying. Eventually though we were on our way, with the single guide as we headed into the increasingly murky clag and on to the summit. Oh yes, and it was snowing a bit too by now

We did have one bit of excitement near the summit. As we were heading up we came across a bright orange rescue/bivvy bag that was obviously occupied. Even so, our guide looked a little concerned as he called out to the occupant to make sure they were ok. Thankfully they were

It seemed they were more nuts than us. Not only bivvying on the Ben in sub-zero temperatures. But they had their mountain bike with them too

Leaving them to their own “adventure” we continued on our way. By now we had reached the marker cairns up to the summit plateau and followed these all the way to the top. I know some people might be offended by such aides, but on a hill as popular as Ben Nevis I can see their benefit in the conditions we were experiencing. It was cold, but more importantly we had very little visibility. You can see just how easy it would be in these conditions to lose all sense of direction and come to an unfortunate end Heading to the summit

And then, to my right, a shadow loomed. I didn’t remember the summit of Ben Nevis having any rocky outcrops on it

It suddenly dawned on me that I was peering at the summit shelter and the summit and the cairn was somewhere to our left. At the summit - with 8ft of snow to boot 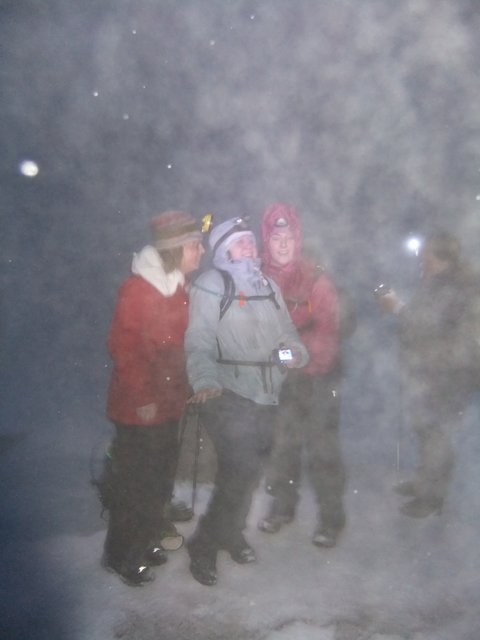 So, half the job was done. We’d made it to the summit of Ben Nevis. We didn’t have any stunning views to take in as the sun rose. We could barely see each other

I was a bit disappointed for the rest of the group. I’ve been on the top of Ben Nevis twice before and had blue sky both times. This was their one time up there and they saw nothing. I needn’t have worried though. Everyone seemed to be buzzing with the sense of achievement of getting to the top of Ben Nevis.......in the dark.......and in wintery conditions

And for me, this was the highlight of the trip

Seeing how much my team got out of the experience

We didn’t hang around at the top for long. With little to see and it being pretty cold we were soon on our way back down. The snow and ice made the initial part of the descent interesting. The one we call Yvonne was soon experiencing the bum slide along with her pal (and for the sake of her anonymity we’ll call he Sharon

). Our guide didn’t seem impressed with all the laughing and joking taking place at this point On our way back down 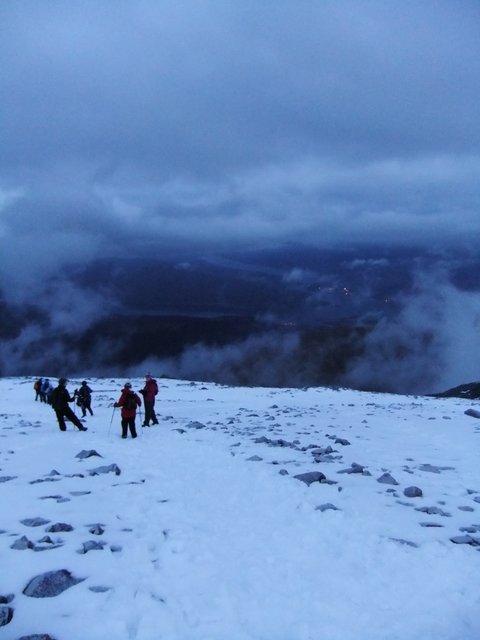 Another view heading down 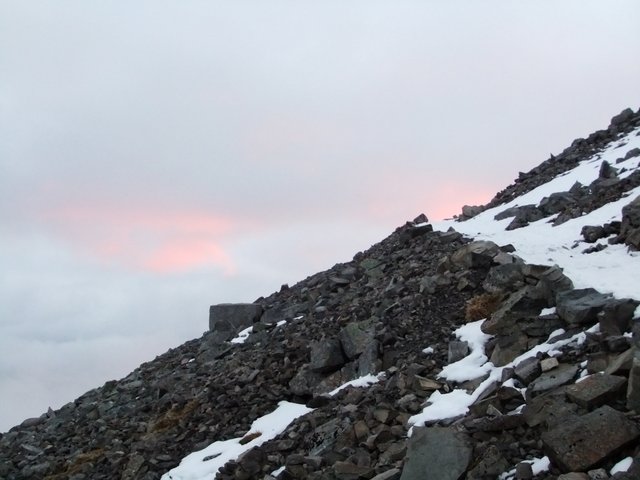 The closest we got to a sun rise shot Down off the snow The "arty" pic - of yours trully courtesy of the ones we call Yvonne, Sharon and Marjory

) as they tucked into their bacon rolls at the bottom.

Despite then clag and snow on the summit the sun did eventually make an appearance as we headed down, giving some good views toward the Mamores 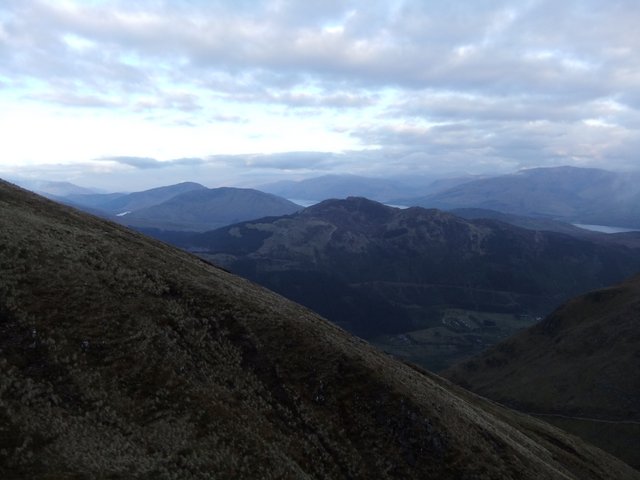 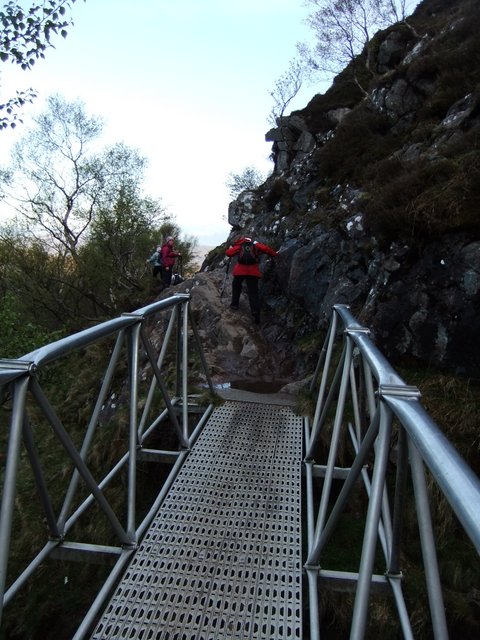 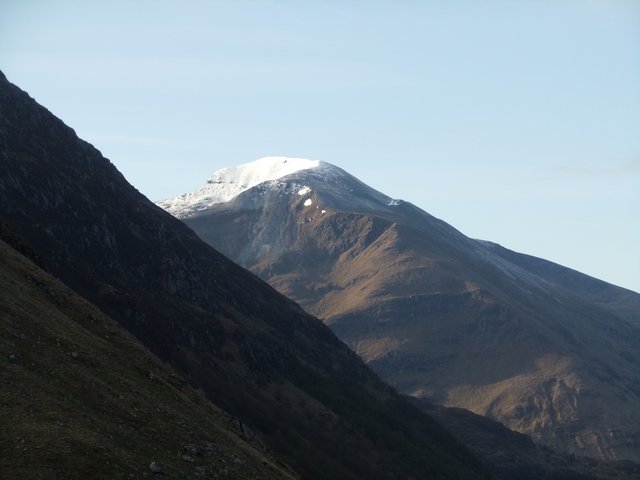 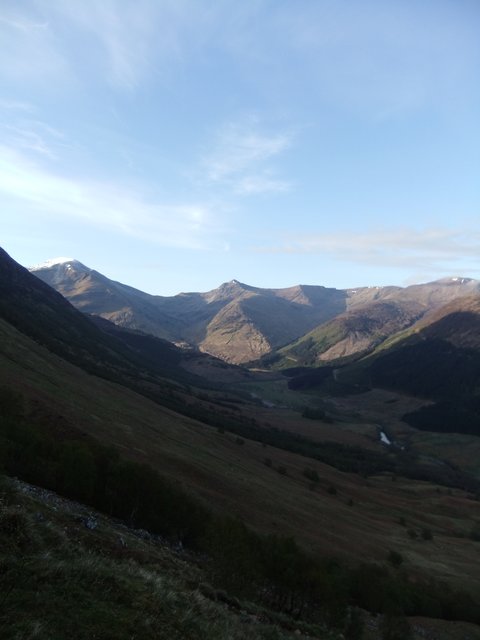 Down onto Glen Nevis The trip finished with smiles all round, along with bacon rolls and cups of tea and coffee At the end of the walk We even got "certified"

And you can’t complain at that

And for my next trip, normal service has been resumed.......

Absolutely brilliant Pete, I've never actually night stalked a hill before but I'm definitely thinking of it now, great work on grabbing enough pics to show the whole journey, that can't have been easy in those conditions

Your mum would be proud of you mate

Have been thinking about a night attempt recently, it'll not be the Ben

but I definitely fancy a go this summer.
A great effort by everyone involved for a great cause. Well done to all

and a fantastic effort by all, particularly the "non-hillwalkers" to keep going in those conditions

well done folks you did brilliantly.

Nice one Pete and the gang, a great effort , sounds like you had a good laugh despite the conditions , well done on getting certified