Dundonnell.gpx Open full screen  NB: Walkhighlands is not responsible for the accuracy of gpx files in users posts

Up at stupid O’clock in the morning to have my breakfast and pack up, I had put all my kit into the bunkhouse kitchen the night before so that I wouldn’t wake up all the other people who were snorting and snoring, burping and farting, but there is always a floorboard or a door that creeks when you least expect it. Today my pack was going to be at its heaviest again because of the restocking, I noticed it as soon as I put it on, just like the first day. The morning began cool, dry and a bit overcast.
Out of the bunkhouse turning right onto the A832 for a short distance to where I turned off left over the Kinlochewe river to Incheril, as you walk along this road you have a good view of Loch Maree down the glen to your left, Now here is a question for all you history boffins out there, Kinlochewe means head of Loch Ewe, So obviously the loch has had a name change at some point in history, why, when and who was Maree? Once you reach the end of the road you pass through a gate onto a farm track which leads to the heights of kinlochewe, this part is very easy, all the way to a junction were I turned left through another gate which is the entrance into a new indigenous hardwood forest. If I had turned right it would have led me to the film set of Stardust, a film where Robert Deniro plays a camp, closet transvestite pirate in in a ship that flies. I forgot about it at the time so didn’t visit.
The walk uphill at first isn’t hard and you are soon descending Gleann na Muice on a gravel foot path all the way to Loch Fada, about half way down the glen there is a junction in the foot path which has a metal sign post, it is wrong, someone has scratched this fact onto it, so check your map, don’t rely on the sign. 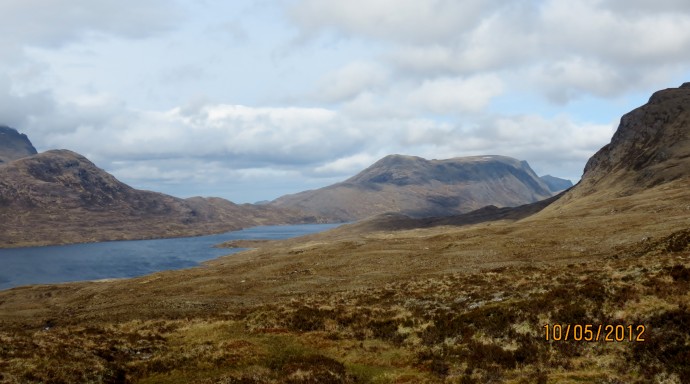 The view down Loch Fada flanked by the mountains of Slioch, Sgurr Dubh, Bein Lair and Beinn Tarsuinn is superb, almost at the loch I turned right uphill with no path, the going was easy underfoot as the ground was dry, the higher up Bealach Ban I got the stronger and colder the wind got.
The two landmarks that I was aiming for were firstly, Loch Meallan an Fhudair which I missed by quite a bit to the west and then the waterfall which I hit bang on, 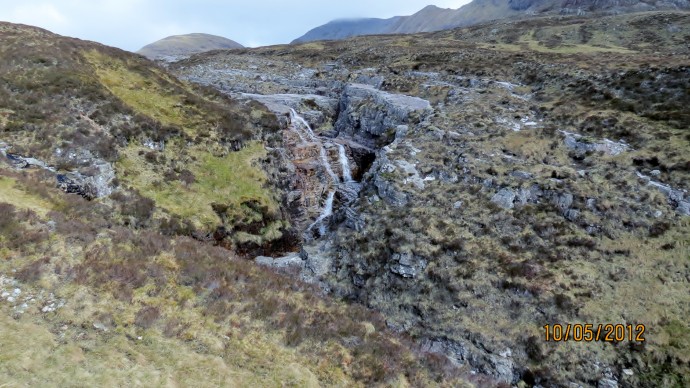 from here I could see Bealach na Croise in front of me at about the same height as me, but the ground in-between dropped away quite a bit before rising up once again, so I simply skirted round to the west keeping at the same height, once at Bealach na Croise I found a path which isn’t shown on my map, this was intermittent and at times a bit rocky, it headed for the path at the side of Loch an Nid. I was having a great day with simple walking, enjoying the views of Mullach Coire Mhic Fhearchair, Sgurr Ban and Beinn a Chlaidheimh with their exposed great slabs of rock. On reaching the junction with the track that leads down into Strath na Sealga and Shenavall Bothy I decided to have a good long break in the sunshine. Now came the ascent on a good metaled track over Dundonnell Forest (no trees), Again as I gained height the wind became colder until I dropped down into the lee of the hill and into the open woodland of Gleann Chaorachain where I encountered the wild goats, some of the kids were up the trees, it’s amazing to see a goat climb a tree! When I popped out onto the A832 it was a left turn then only a short five minute walk on the black stuff, then it was now a right turn over an old stone bridge heading towards Dundonnell house. Just over the bridge past the farm buildings there is a thin strip of land between the road and the river, this is where I chose to camp for the night as there is a thick layer of moss over the ground which is then covered in last year’s leaves from the mature beech trees that overhang the area, very comfy and warm!. I decided that when my tent was up and I was organised for the night that I would pop along to the Dundonnell Hotel for dinner, I didn’t look at the map, I had assumed that it wasn’t far away, Mmmm! over 5 Bl##dy miles to it and back along the shores of Little Loch Broom, but the food was very good. Having returned from my epic march to get dinner, it was time for bed and bring a close to a fantastic days walk. ZZZZzzzz !

Race to the Bothy

Dundonnell to the School House Bothy


schoolhouse.gpx Open full screen  NB: Walkhighlands is not responsible for the accuracy of gpx files in users posts

This day started cold and wet; there was definitely a change in the weather this week, so unfortunately I wasn’t taking my camera out of its dry bag until it had stopped raining.
Following the normal mornings routine it was time to backtrack to the bridge and turn left immediately before it, through a gate and up a track which led past a house on the left, once past the house the track continues along the bank of the river at the edge of a field with steep sides, turn left and cross the field which is uphill towards the tree line of an open wood, no path, once you reach the tree line you will find an old path which will take you to Inver broom Lodge. The footpath was very wet and had blown trees all over it, This section is steep in places but you soon pop out onto open moorland which remains up and down on a faded quad track at times all the way to the start of the descent at Creag Bhriste, nearer to the bottom as you approach the forest it becomes very steep on grass, when wet it’s very slippy and I ended up on my backside several times (each time the air was blue with obscenities!). Once at the bottom I had a break in the shelter of the bus stop before crossing the river and turning left onto the A835 which leads to Ullapool, I was only going as far as Campbelltown which is just before Leckmelm, this was a miserable, cold and wet walk on the black stuff on a very busy road with the driving rain in my face. This road walk was completed in double quick time. After turning off for Campbelltown it was into the forest on a good track which was sheltered by the trees, it was however extremely steep all the way to the top. On leaving the forest passing through another gate the ground levels out, now the sun has come out and once more it becomes a pleasurable walk, through Strath Nimhe to East Rhidorroch where the descent is once more steep on a good but wet track, At the back of the house I was confronted with a tall stone dyke flanked by a deer fence, the only way over was on a metal style, into what felt like the garden of the house, once over the style two dogs in the garden spotted me and drew the attention of the owner towards me, I thought I was going to get a roasting from the chap but he just turned round and went back to what he was doing, Passing the left side of the house and across a field to a wire bridge which spans the Rhidorroch River, then it was a right turn onto a good metaled road which goes all the way past Knockdamph bothy at the East end of Loch an Daimh, this is easy going. Arriving at Knockdamph Bothy, did I beat Shaun? I had a look in the Bothy book for the last entry, he had been and gone two hours before me leaving a note in the book letting me know he was heading for The School House Bothy. After an hours rest I continued towards the School House as well, On reaching Abhainn Poiblidh water I couldn’t be bothered changing into my trainers to make the crossing, instead I opted to cross hopping from one exposed rock to the next, putting a rock in where one was missing. 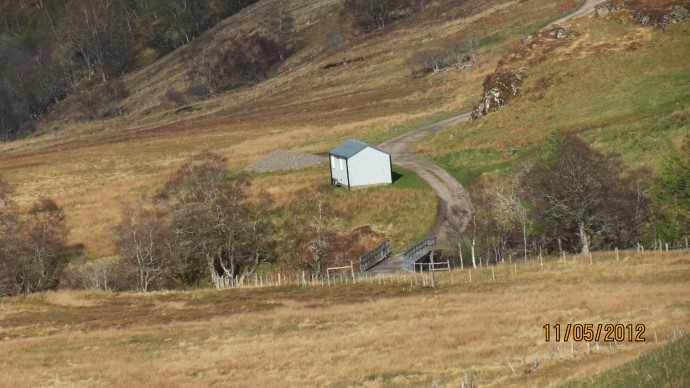 On arrival at the Bothy I was greeted by Shaun who had made himself at home in the very posh Bothy, After spreading my tent out on the floor in the other room to dry and getting organised for the night we exchanged the experiences of our chosen routes over the last two days whilst having dinner and having a nice relaxing evening before retiring for the night. ZZZZzzzz !