We set out early for this particular hill. We had booked dinner for 5pm at the Lade Inn and knew that the walk/climb would probably take about 4-6 hours. As another poster had said that there was a diversion in place, we legislated for the top end of the 4-6 hour time period. We actually ended up completing the walk/climb (from setting off to coming back) in 7 hours. That was 7 hours of non-stop hiking (10 minutes stop at the peaks) and at a good pace. So be warned: the diversion does add quite a bit of time to your journey. Anyway, we set out from the car park at Loch Achray. 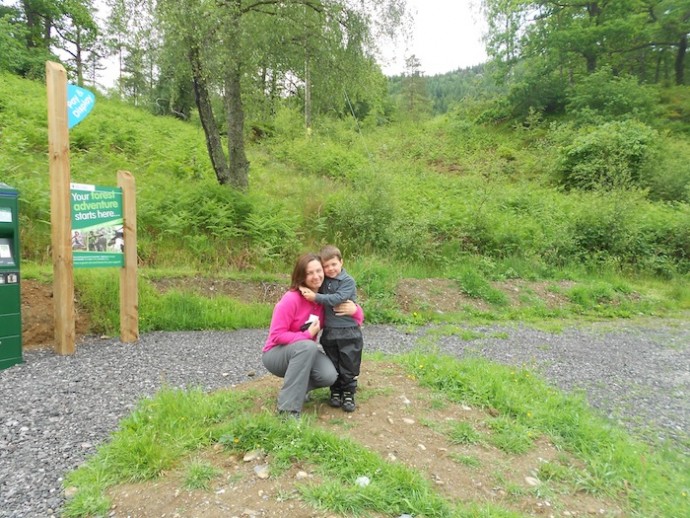 As we turned the first corner and saw Ben Venue clear, and with no low-lying cloud (what a change from last week's trek at Ben Ledi!), we all thought: great! 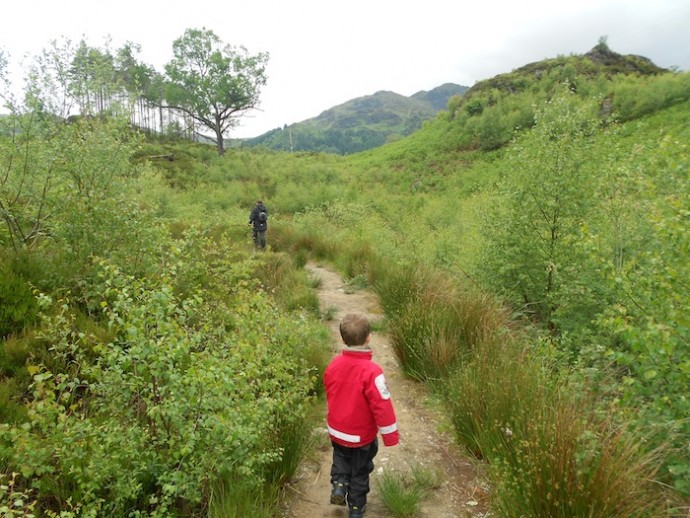 on route, MacT Og found a dead frog on the road and we took the now obligatory 'MacT Og and dead thing' photo (sheep, mice, slugs, frogs; I wonder what our next hike will bring!) 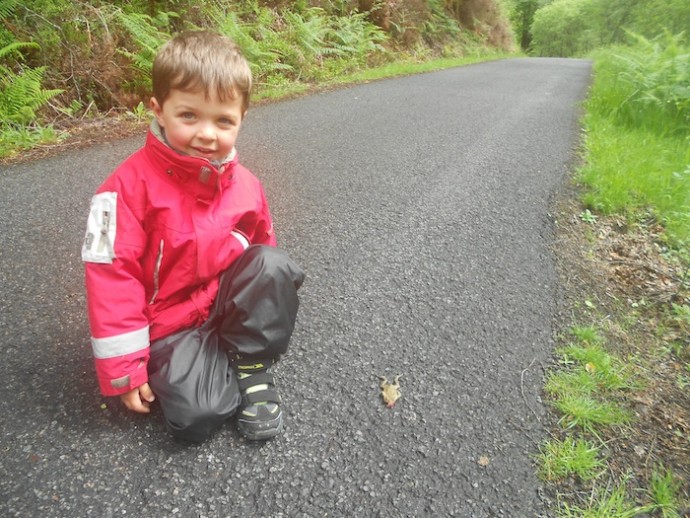 Moving on, we crossed the small footbridge which crosses Achray Water (nice waterfalls here) and made our way onto the dirt track which leads to the forest. 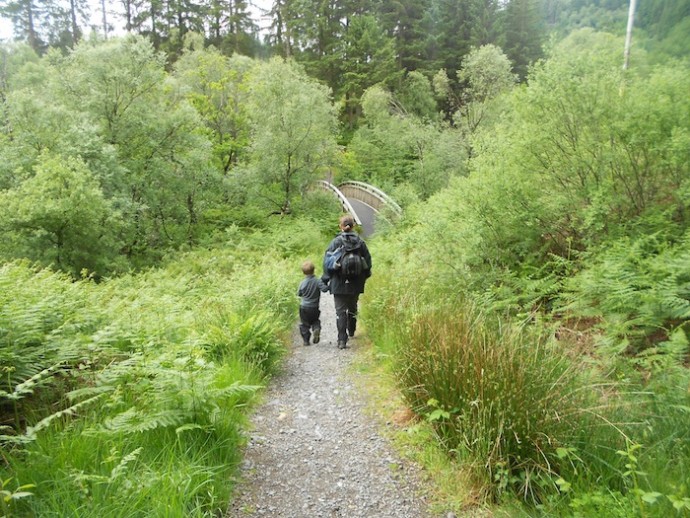 After a nice wee walk along the track, we came to the signs proclaiming the diversion. The path has been blocked by a fallen tree to prevent access to those less inclined to obey notices. The diversion was only a few feet away, so we thought that it would not be too bad. Our first taste of the diversion track gave us a flavour of what was to come. There is a boggy area as soon as you enter the forest path, so a crate with wire mesh on it is there as a makeshift ford. 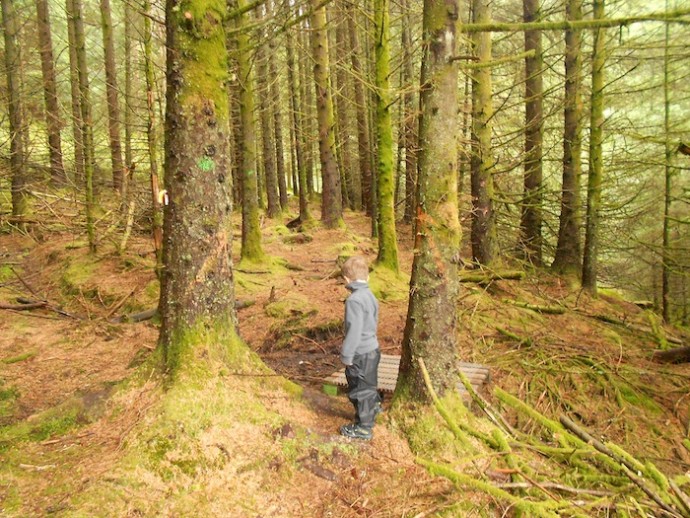 MacT Og not sure about the 'bridge'

It would not be overstating the case to say that the path through the forest was a boggy mess. There are the usual, and expected series of burns and streams to cross, but some of the bog was almost impassable. 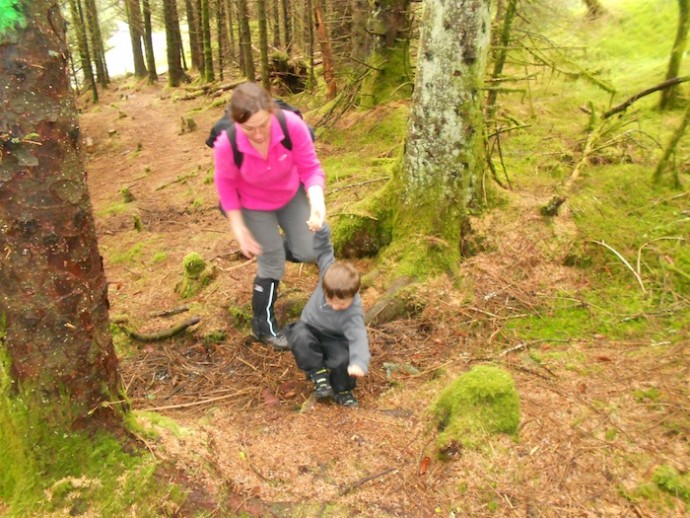 Mummy and Og jumping a burn 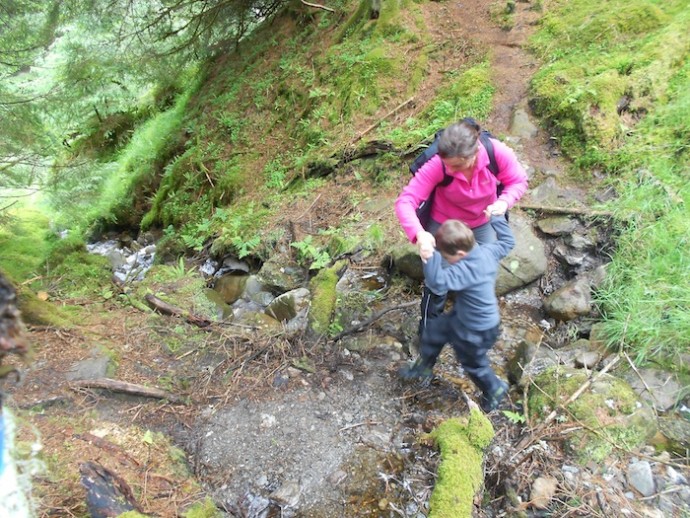 We were unable to take photos of some of the truly horrible peaty sludge, as there was a colony of midges at each section (smart little fellars, aren't they? Easy feeding on slow-moving meals). It was pretty grim at these points as I threw logs into the bog to make a route (the logs sank after each footstep on them). MacT Og had a ball listening to Mummy and Daddy 'ach-ing' and 'jeezo-ing' their way through the mud. We eventually got out of the forest and sludged our way through the marshy grass up onto the logging road which is crossed on the diversion path. 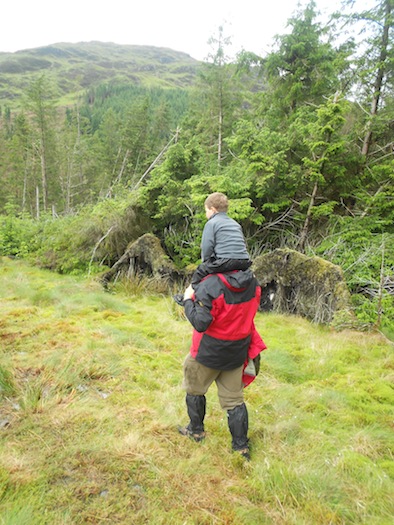 MacT Og decides against swimming through the swamp

As the diversion sort of takes you away from Ben Venue (which you turn your back to at this point of the hike), I had to get my OS map out to see exactly where we were. It was also a good opportunity to have a quick bite to eat (MacT Og munched on some chocolate footballs which we bought for him in Callanader) 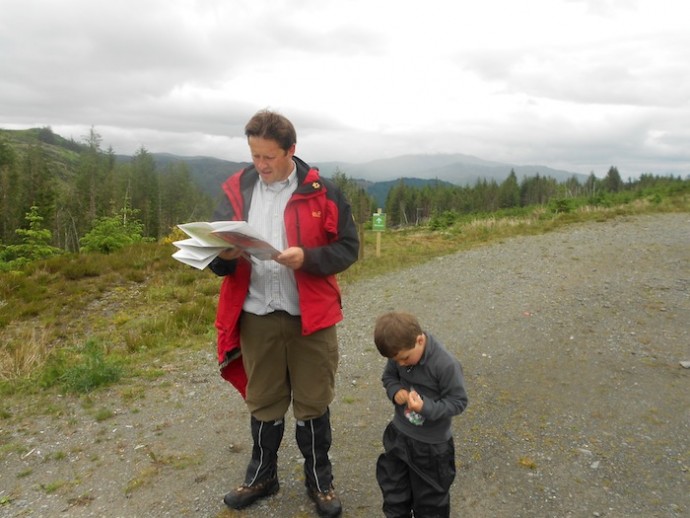 We followed the diversion towards the ford at the foot of Ben Venue and crossed it. We then started out ascent of the hill. 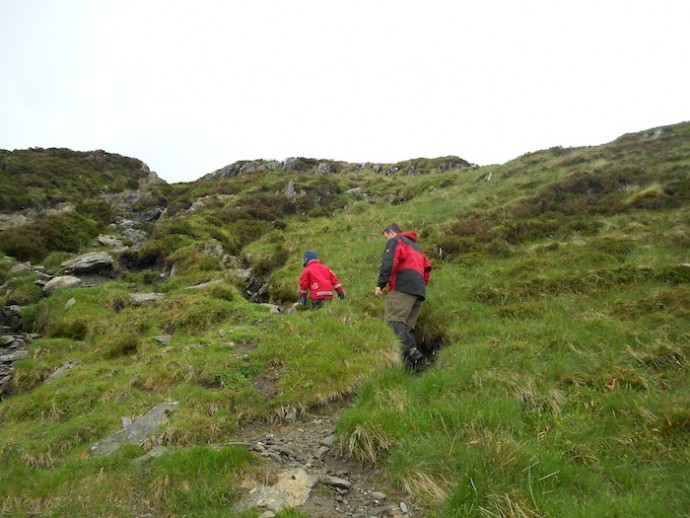 It was a nice enough week climb, which started to get quite rocky and enjoyable towards the top of the ridge where the big waterfall is. We crossed the plateau at the top of the waterfall and made our way through the marshy area up to the next climb which brings you out at the cairn which marks the final ascent to the two peaks. The way up to the peaks here is achieved via a mini scramble. 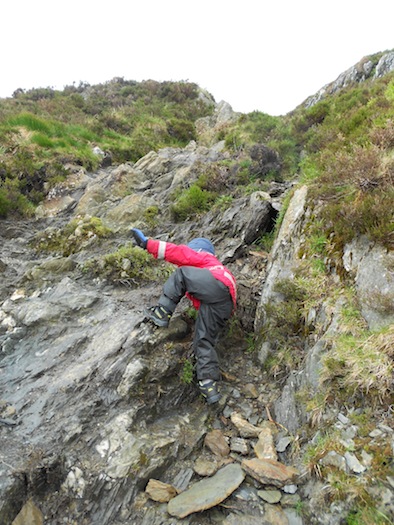 MacT Og on the up

We then had a rocky climb up the first peak (729), but the weather front on the farthest away point of Loch Katrine made for poor visibility, so we meandered down the other side and made our way to the second peak (727) for better views - it was clear and quite nice looking to the south. 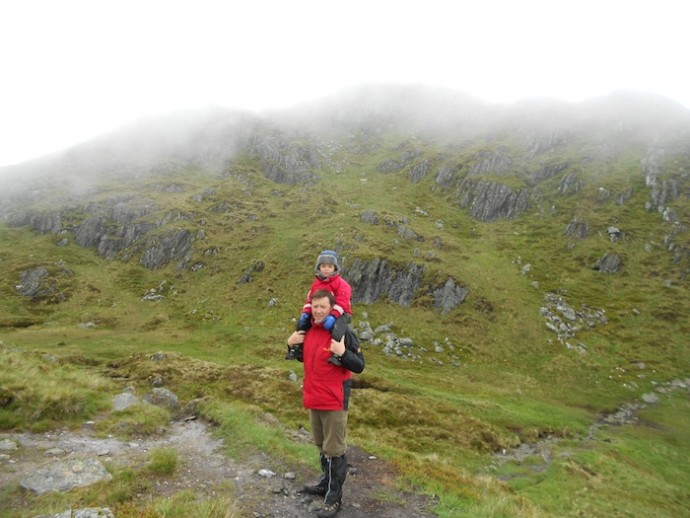 in between the first and second peaks

Once up at the cairn of peak 2, we gave MacT Og the promised lollipop and me and Mummy had a wee drink. As this was happening some of the cloud lifted from behind peak 1 and we got a good atmospheric view back up to the top of Loch Katrine and beyond. 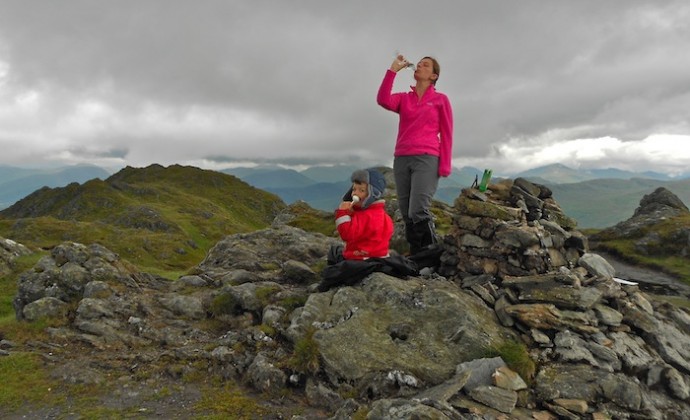 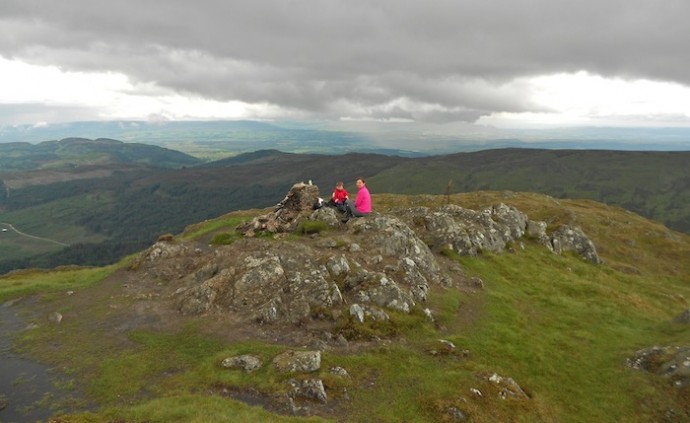 Good views to the South

At this point we had realised that it had taken us a good hour longer than we expected to reach the summits. So we thought that we might exit the peak via the not-very-well-trodden south east pass. However, as we turned round towards the North we saw a pretty severe rain storm coming down the Loch, so we reckoned that it was too much of a chance to take in such potentially poor weather, so we went back the way we came. The rain came down pretty heavily, so we wrapped MacT Og up (buff, hat, gloves, the fully monty) and made our way down. 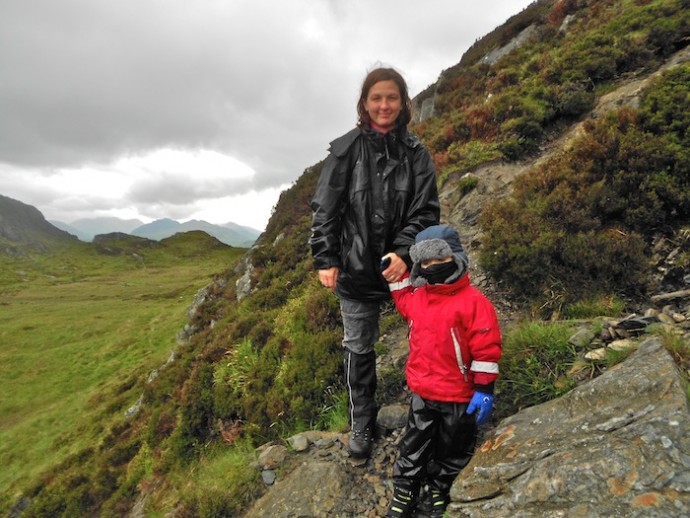 Nanook of the North (a favourite saying of my Mum) 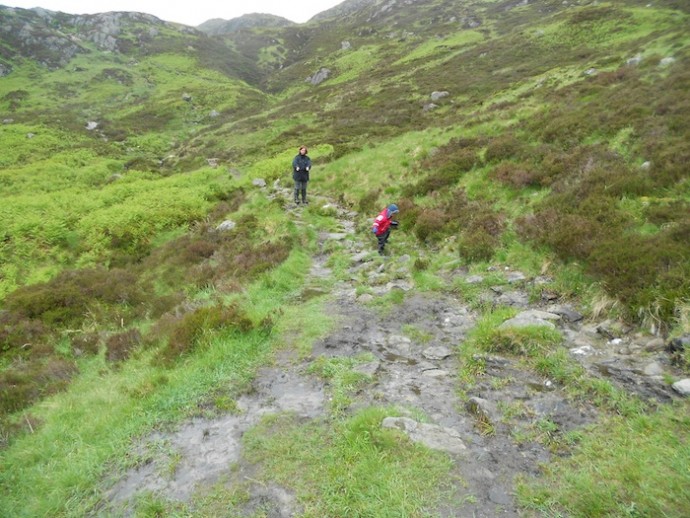 Back into the sludge

We headed back into the sludge and mud, which was just as bad, if not worse than before. Eventually we reached the car park fully 7 hours after we had embarked on the journey. To be honest, though, despite the sludge, the diversion, the rain in the latter part of the day, and the midges in the bog, this was, as Mummy MacT and MacT Og all agreed, a very enjoyable day out. We then went for food at the Lade Inn in Kilmahog, which was also excellent. There really is nothing quite like hill walking. Here's to many more days like this.

Great, well done to you all.