This was one of those exiting days in your lives when you think this is it!! At last I am going to be able to venture onto the Cairngorm Plateau. Don’t really know what I am getting excited about after all I am only 56 years young!

The forecast for the Cairngorms was good with 80% chance of clear Munro tops, which was in stark contrast to the weather further south where the North of England and South of Scotland were suffering flash floods.

Arrived at the Ski Centre car park at around 9.30am and there was already lots of cars here with a coach party of similar aged people wandering about with cameras after just departing the Lochs and Glens Tour Coach. Oh eck let me get going quick I am not ready to join that trip yet!

From the car park there are some steps which drop down a little in front of you and then joins a clear path which heads roughly in a westerly direction. The day was clear and there was a clear view ahead and all around the view towards Meall a Bhuachallie was especially picturesque and depending on how my old aching legs were after today could be the objective for tomorrow. The route is quite a steady climb where the accent is not really noticeable, but what a lovely place as we approached the Alt Coire an t Sneachda the cliffs of the same name come into view they are without doubt very impressive with snow was still lying in many of the Northern most gully’s. Now this would be a good place for all those Lochs and Glen’s cameras, much better than the visitor centre.
. Looking back to Ski Centre

Further up as we climbed a young girl passed at speed and I was pretty envious of the ease and grace in which she travelled, strangely as we levelled out near Coire an Lochain she veered off the path and appeared to be looking for something, with use of her map and what looked like a GPS. I watched at a distance to see what she was doing but as I did so I felt that the young lady did not appreciate being observed so we went on our way. I wonder if this is the new craze called Geo-Caching and she was looking for buried treasure and I had missed an opportunity to find a pot of gold. Anyway after a few circles of the area she headed back down towards the Ski centre.

My walk yesterday had allowed me my first view of the mighty Breariach and this time she came into view again oh what a mountain so majestic. I am lucky to be here and there peeping alongside Breariach was Sgor an Lochain Uaine and Cairn Toul. I pointed these out to my wife Carol who looked at me and said you are kidding me NO WAY!!

I had a laugh to myself and had to explain that that was not our objective for today, but she never believes me, as so often on reaching a peak I say lets go and knock that one off it’s only over there!! The temperature had dropped as we travelled and increased our elevation and indeed were met with some of that lovely midsummer hail and we sheltered behind some boulders and had a coffee taking in the views across the Lairig Ghru.

Revitalised and refreshed the snow storm now well on its way we again climbed steadily reaching a high point with the slopes of MacDui ahead in the distance. We descended and passed a small lochan which I think is close to where the disaster in 1971 happened (I think) and again climbed towards a boulder field which we negotiated with care. Eventually reaching the summit and my second Munro of the week and again there was not a sole around it was so quite the views were stunning all around. Take your pick of the wind shelters up here there are so many and I can imagine what it must be like in school holidays..Not today though ...Just Bliss! I wandered away from the shelter as I wanted to glimpse the view of the River Dee and the Devils Point, I was not disappointed and again was blessed with a wonderful panorama. Oh I have to come back here but I think with my tent next time and pitch close to Courror Bothy. 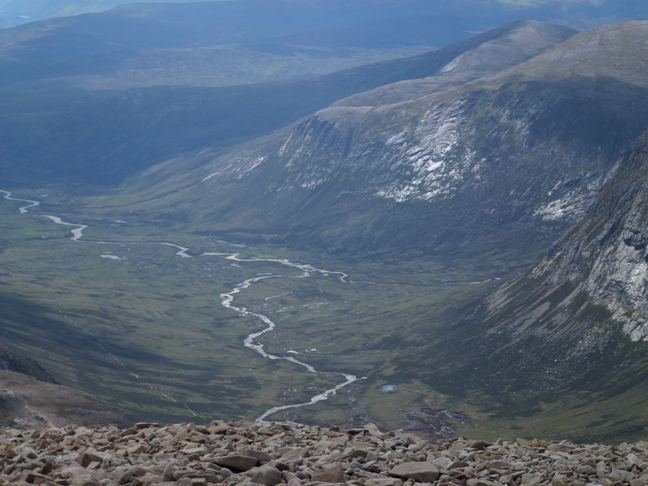 The path is clear and easy to follow however I do appreciate what a dangerous place this can be if the mist or the weather turned nasty up here so constantly taking a compass bearing just in case, as it was I didn’t need it and I think that the Highlands didn’t mind an Englishman enjoying their glory and beauty of Scotland today. 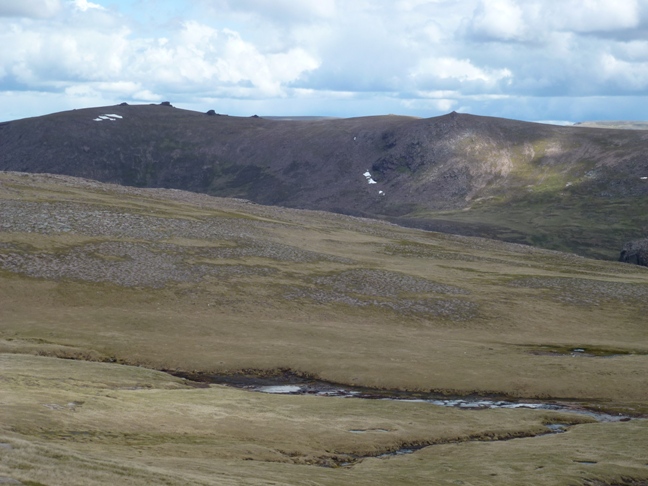 The legs were tiring a little now but the final objective was in sight and a quick look with the binoculars showed that there was lots of activity up on the summit of Cairn Gorm. At this point in the day we had not seen or spoken to a single person. That was soon to change as we passed and exchanged pleasantries with many groups and individuals on the final stretch. We reached the summit of Cairn Gorm and again the views were stunning although it was hard to take any clear shots with all the people milling around up here. I couldn’t help notice one couple inadequately dressed in jeans and flimsy tops with no fluid. Oh Dear! Not for me to remind them of the dangers and rapid change of weather conditions. 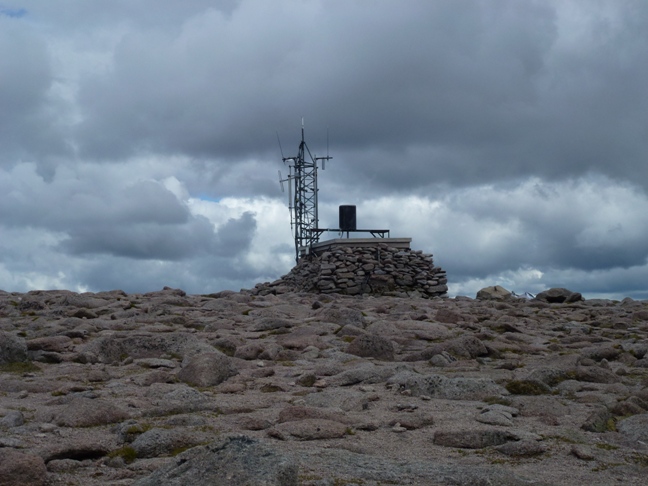 From here it was just a walk towards the cafe below on what is an excellent path way but I am not sure that it does the mountains character any favours. On entering the building we were asked to sign in which I thought strange, but now understand why after speaking to one of the waitresses in the cafe. No one is allowed out of the door onto the mountain when travelling up by the railway.

After the coffee we decide to be tourists and travelled back down the final part of the walk to the car park on the train. Tired but pleased with our efforts.

Another cracker LH! The miles might be long but It looks to be worth every last one. I also like the idea of getting the train down

Great stuff LH, really enjoyable report and beautiful pics but I think you got something the wrong way around, surely you should go UP on the train and walk back down

....I'll bet your Mrs would agree with me

That shot of a distant Ben Rinnes reminds me of the day I got to the summit of that particular corbett when the heavens opened and it lashed down all the way home....great

Great report LH. Superb photos too. Would like some of that weather to come back

Great pics & report. As Monty says 'please can we have our good weather back sir'?

Geoff, really enjoyed your report and some fantastic photos

Great idea going back on the train

The views down to Cairn Toul and Braeriach from Ben Macdui are good enough to have you planning a return I'm sure.

I'm lucky in that when I'm at home, it's just about possible to squeeze in this route after work on a summer's evening

johnkaysleftleg wrote: I also like the idea of getting the train down

Cheers JK
I have to thank the Mrs for that idea

ChrisW wrote:Great stuff LH, really enjoyable report and beautiful pics but I think you got something the wrong way around, surely you should go UP on the train and walk back down

Ha ha, your'e probably right Chris, but coming from York the Grand Old Duke said When you were up you were down

You know the rest

monty wrote:Great report LH. Superb photos too. Would like some of that weather to come back

jonny616 wrote:Great pics & report. As Monty says 'please can we have our good weather back sir'?

Cheers Guys, I have ordered good weather for August when I am next having a wander up here

Luv you too Susie

malky_c wrote:The views down to Cairn Toul and Braeriach from Ben Macdui are good enough to have you planning a return I'm sure.I'm lucky in that when I'm at home, it's just about possible to squeeze in this route after work on a summer's evening

Thanks Malky, yes you are quite right well and truly smitten

That was a great day, LH. Well done with those views! 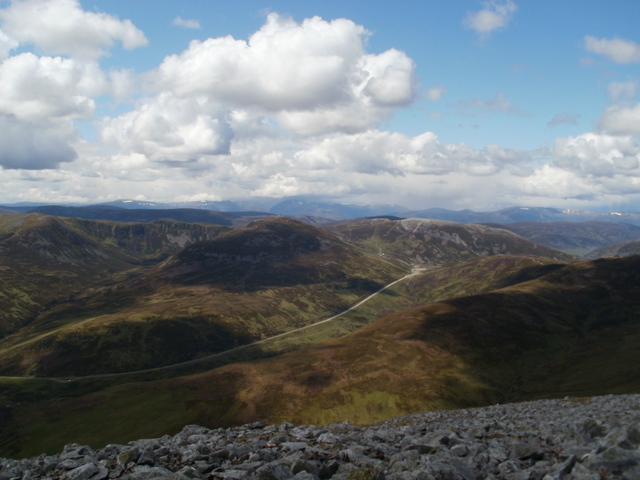 Thanks for a cracking report and some excellent pictures. And you picked a fine day during a period of very mixed weather in the East Highlands.

Something really special about the cairngorms as your photos show

Lucky you getting some nice weather and great views

I think the mountain railway is a lot of fun although some people dont like it.

Great stuff and super weather to be in the Cairngorms. The photo you think is Beinn Mheadhoin is correct and it is well worth a visit as it's a beautiful walk to the Loch once over Cairngorm and when you get there you have the Tors to play about on if you have any energy left

Cheers Simon a great day out

Im waving back at you

morag1 wrote:
Loved this report Something really special about the cairngorms as your photos show

Thanks Morag, I was lucky with the weather

Johnny Corbett wrote:The photo you think is Beinn Mheadhoin is correct and it is well worth a visit as it's a beautiful walk to the Loch once over Cairngorm and when you get there you have the Tors to play about on if you have any energy left

Cheers Johnny I appreciate the confirmation of Beinn Mheahoin

Lovely report and photos, looks like a day to remember , a wonderful place

Gavin99 wrote:Lovely report and photos, looks like a day to remember , a wonderful place