After arriving an hour late for my last walk i chose to drive up the night before and kip in the van and the drive was a decent one,the sun was shining most of the way and there was very little cloud in the sky so my spirits were in fine fettle and i got bunked down for the night,unfortunately failing to get a decent sleep due to the anticipation of a mammoth walk the next day and the sound of the rain battering the roof of the van

The alarm is never welcome at 4am,especially when you wake to find its raining,the cloud has lowered and the midge's are extremely hungry

After a longer than planned breakfast,myself and scoob drove round to the start of our walk at loch a bhraoin and set off in good spirits with all 9 Munro's of the Fannichs our intended target for the day,we did have a bail out option planned at the 7th summit but this would only be taken if we thought that the last 2 summits would be beyond us. the view at the start of the walk

The track in from here is good and we made light work of the initial ascent up onto the north ridge of Toman Coinich,bypassing the top of this hill to reach the bealach before A' Chailleach,from there just a short pull up to the first summit of the day which was unfortunately clagged in 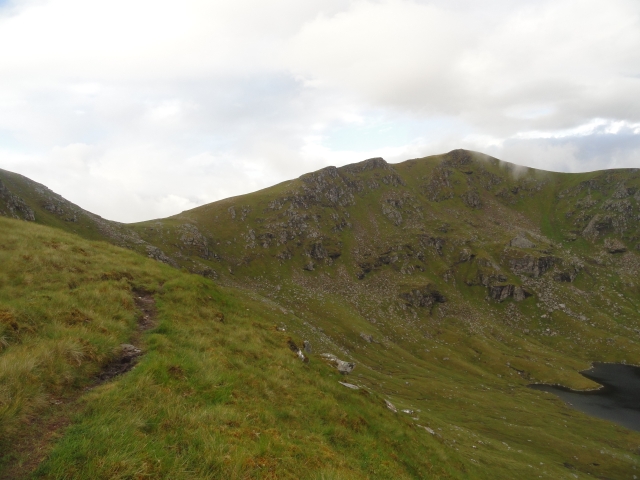 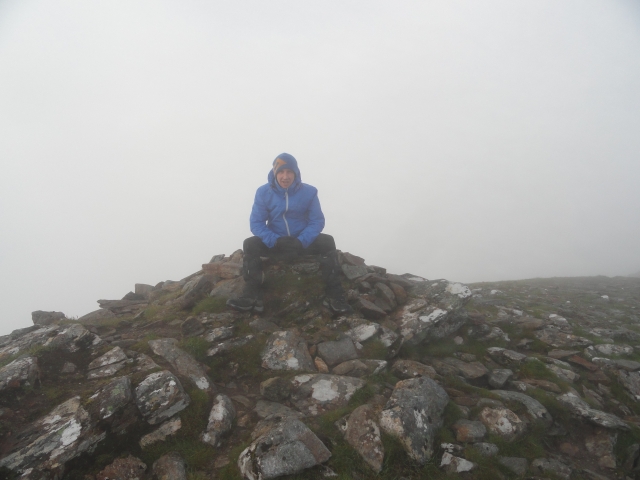 From here we again bypassed the summit of Toman Coinnich and arrived at the second Munro,Sgurr Breac in good time and we were rewarded with fantastic views as the cloud cover came and went. 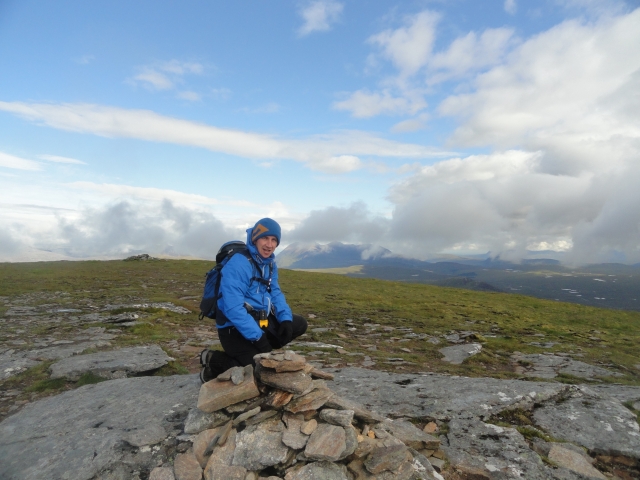 The descent of Sgurr Breac was fairly steep but easy enough and we stopped for a bite to eat before taking on the next ascent,heading for the bealach south of Sgurr nan Clach Geala where we left our bags and walked up to summit no.3 - Sgurr nan Each. 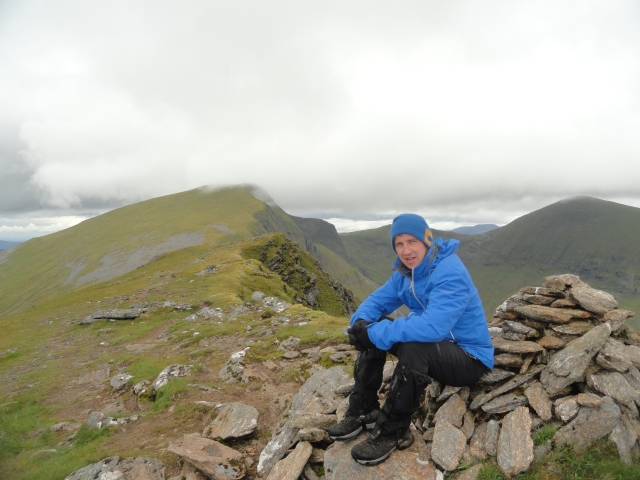 summit no.3 - Sgurr nan Each

We then retraced our steps to the bags and headed up the tough 500mtr ascent to Sgurr nan Clach Geala realising that this would be the hardest climb of the day and reached the summit just as the clouds rolled in over us again. 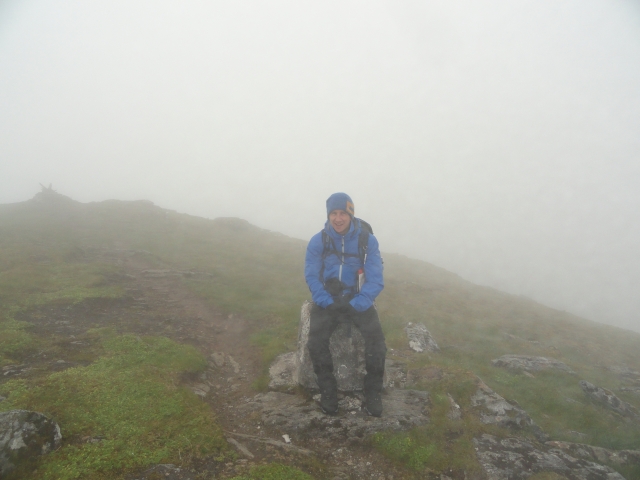 We didnt stop too long here and headed off for summit no.5,Meall a' Chrasgaidh.Again we dropped the bags and then strolled up the short ascent to the top where we were rewarded with the some of the best views i've ever had from a hill,An Teallach in particular stood right out and is such a fabulous looking mountain. 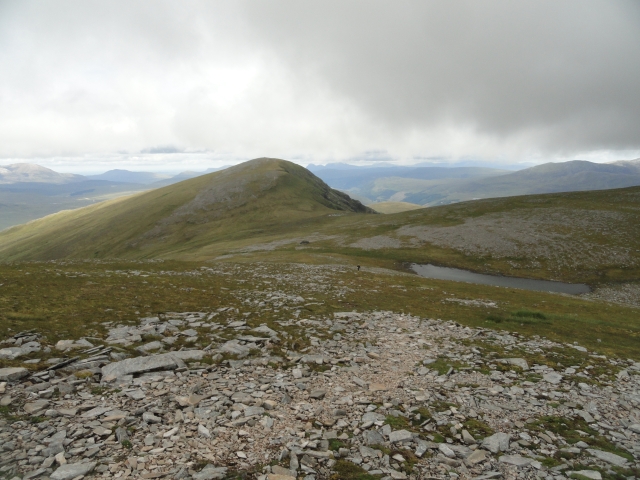 heading for Meall a Chrasgaidh 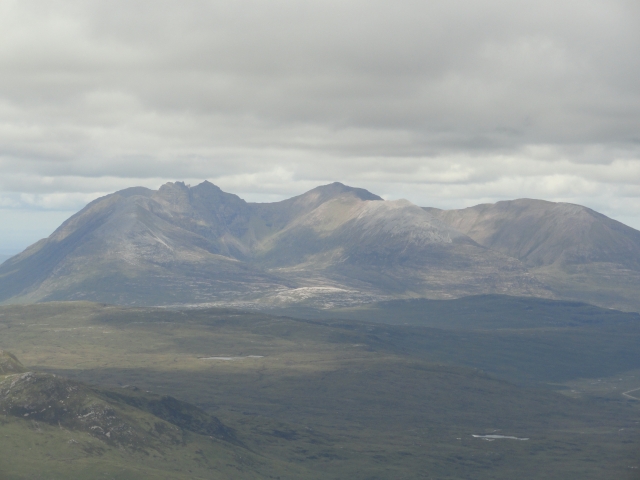 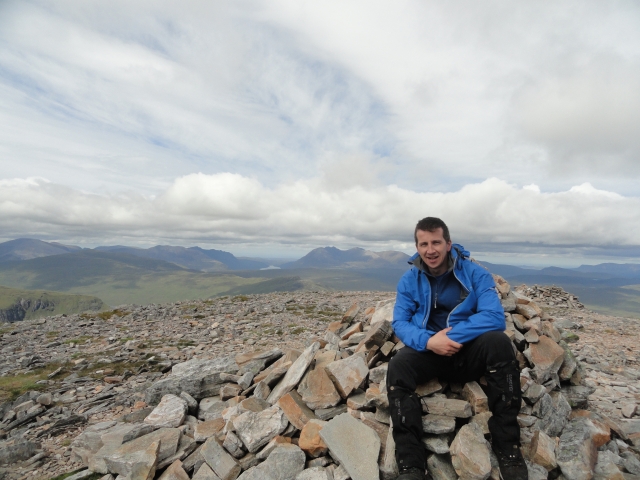 summit no.5 - Meall a Chrasgaidh

So 5 down,4 to go and we remarked at how good we were feeling and the day was going well so after picking up the bags we crossed over Carn na Criche and headed up Sgurr Mor,the finest looking mountain on this circuit in my eyes and after some huffing and puffing eventually reached the top where we had another short break and surveyed the rest of the route we had left. 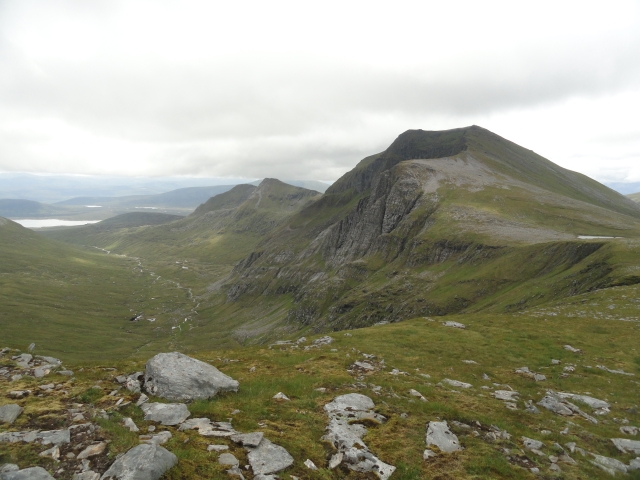 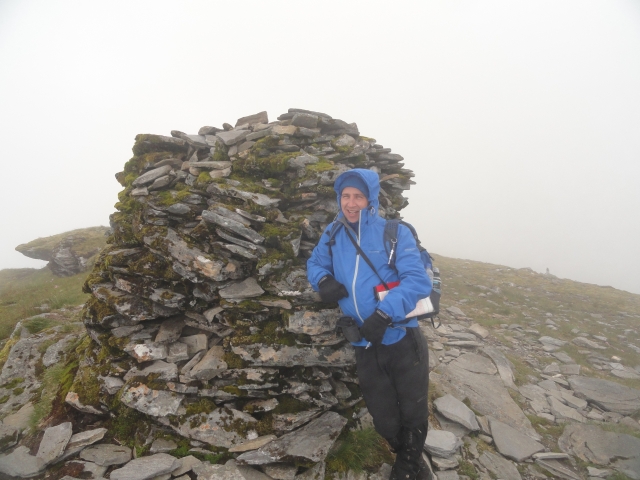 Leaving here we dropped down and left our bags for the walkout to Beinn Liath Mhor Fannich which wasnt too bad but by this point my feet were starting to feel a fair bit of discomfort and clambering up through the rocks to the summit wasnt making things any better but we reached summit no.7 in decent spirits knowing we only had 2 Munro's left to go. 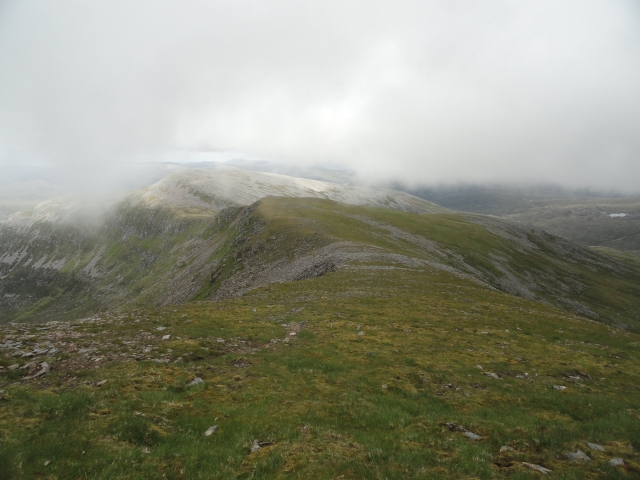 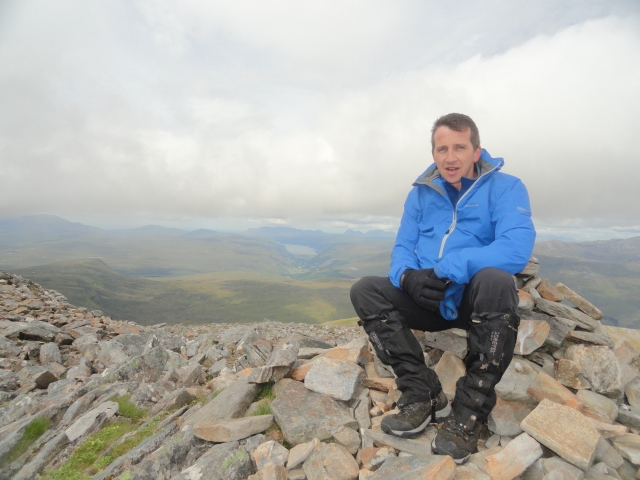 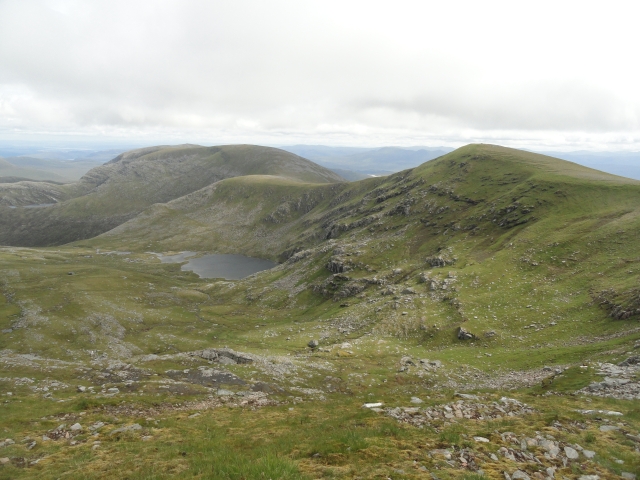 the view out to the last two Munro's

After summiting we quickly returned to our bags where i had a pit stop to change insoles and socks hoping this would refresh my weary feet for the remainder of the route,it didnt make too much difference overall but it did feel a bit better so we pressed on as quickly as our tired legs would allow and we were glad the pull up to Meall nan Peithirean was gentle as we were feeling tired and weary due to the distance and height we had covered to this point.The wind had picked up considerably as we crossed the top but good progress was made and there was a feeling of relief as we summited Meall Gorm and we could see our last Munro,just beyond height 922m and it looked an easy enough ascent. 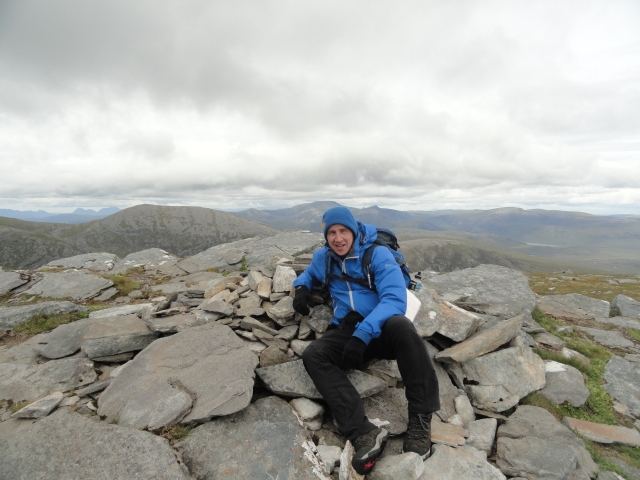 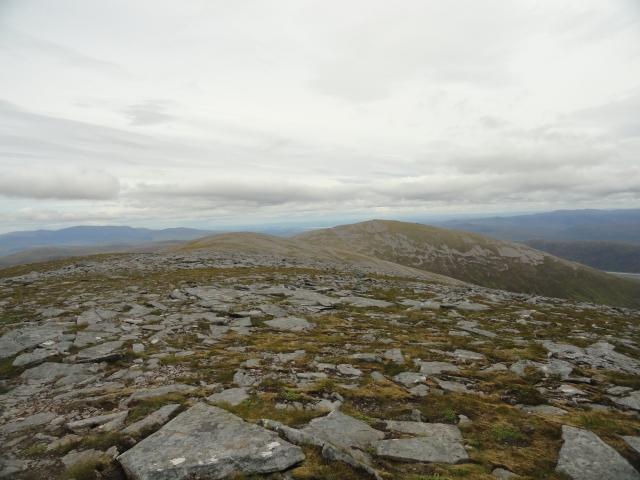 looking over height 922m toward An Coileachan

We stopped before the pull up to An Coileachan to have the last of our food and decide on the route out and decided to leave our bags as we would return to here and drop down by Loch Gorm to pick up a faint path we could see that should hopefully take us back to the track out.The ascent of the last Munro isnt too bad but with fatige setting in we certainly didnt break any records getting there but what a feeling to reach the 9th summit,we had both given a huge effort to reach here and there was a huge sense of achievement and relief aswell i may add.A good few pics taken here and then we headed toward our bags to prepare for THAT walk out! 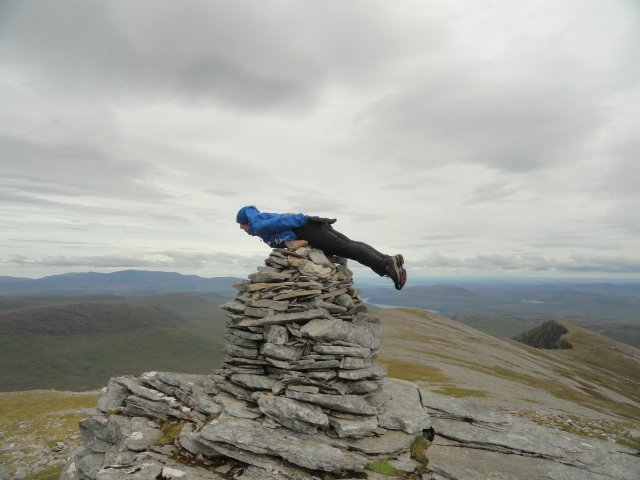 summit no.9 - planking on An Coileachan 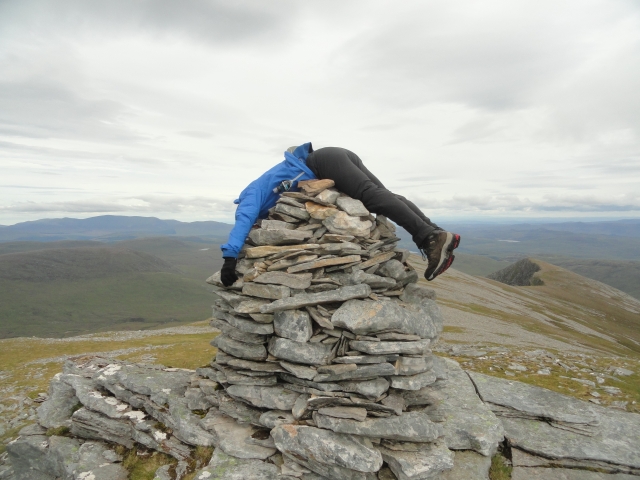 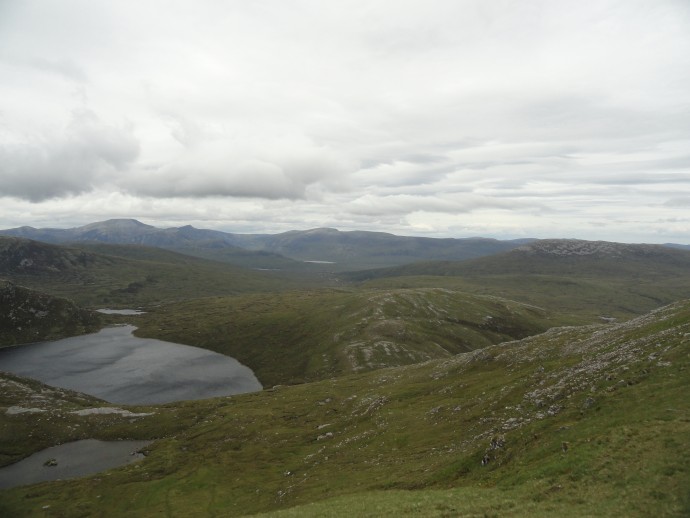 Loch Gorm and our outward route

After dropping off to Loch Gorm we picked up the path but this didnt last long and before we knew it we were cross country walking which after the day we had wasnt pleasant,think i cursed every bloody step on the way out and eventually we reached a good track which would take us back to the road.However,the track ascends about 60m up into the wood which didnt fill me with joy and the harder walking surface was causing havoc in my boots,my feet were burning by this point and the rest of the walkout wasnt nice but we eventually reached the van 13hrs 15mins after setting off!

A great walk with crackin company(cheers stuart!) and a fantastic set of hills!

NB- one word of caution,do NOT walk in from the north if you can avoid it,the path is boggy and eventually it dissapears and you have to cross undulating bog just to reach Loch Gorm....its just plain horrible!

You made that sound easy

Some going there Iain,like the collased on last summit pic

you better watch it Iain you seem to be joining the bonkers club!

Well done folks , a massive day ,my feet were hurting just reading that

That's a massive effort. I did the three eastern Fannaichs in a day, and that was enough for me

To tick off all 9 in one go is some effort. Well done

Brilliant! Hats off to you both - very well done

thanks to all for the kind comments

scoob999 wrote:You made that sound easy

looking forward to it stuart!

mrssanta wrote:you better watch it Iain you seem to be joining the bonkers club!

that happened a long time ago

i had planned on walking this solo on the 23rd

but yes,very happy we had 2 cars-couldnt have managed the road walk on top of the hill walk!

"oooooooft" was my first thought when I read this

Good effort by you and scoob.

Can't believe how fresh you look on summit 7

I enjoyed this route when doing it in reverse.

Well done both of you

bigspender wrote: - I particularly like the one of you planking - take note Stuart this is how a younger model does it

Haha Iains a lot younger than me! but i'll try harder the next time

That was up the Fannichs 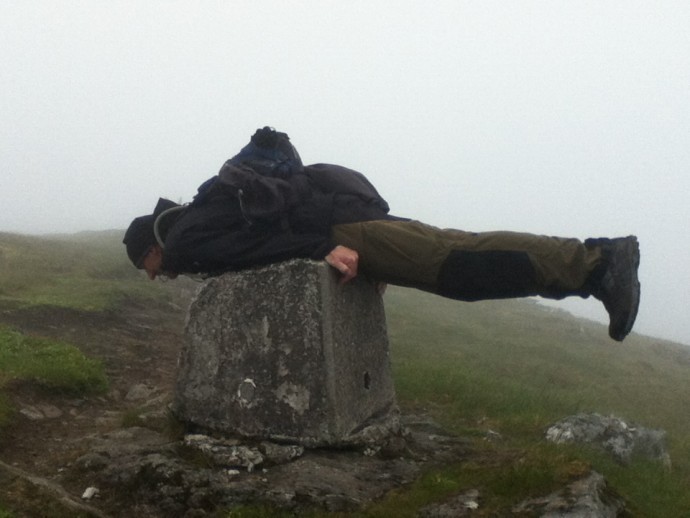