A pair of Marilyns in Shetland, part 2

A pair of Marilyns in Shetland, part 2


I'll start of by saying I'm of two minds about whether I'm really allowed to call this one bagged. You be the judge.

There's a very nice chap named Allen Fraser who runs day trips to various places around Shetland from Lerwick, and on this particular day I was on his trip to Yell and Unst with about four other people. It was a great day with lots of sunshine. We stopped for lunch at the Northern Lights Cafe in Haroldswick, within sight of Saxa Vord. Allen's plan after lunch was to drive us up and over the shoulder of Saxa Vord for the views of Muckle Flugga and Out Stack, and hopefully some puffin-spotting. I was eager to get another sub-2000 Marilyn climbed, and convinced him to let me have a go at the hill on foot. He seemed extremely doubtful that I'd get very far, but he agreed to lollygag around the cafe and the attached boat museum for a bit to give me a head-start. So gobbled my lunch and took off. 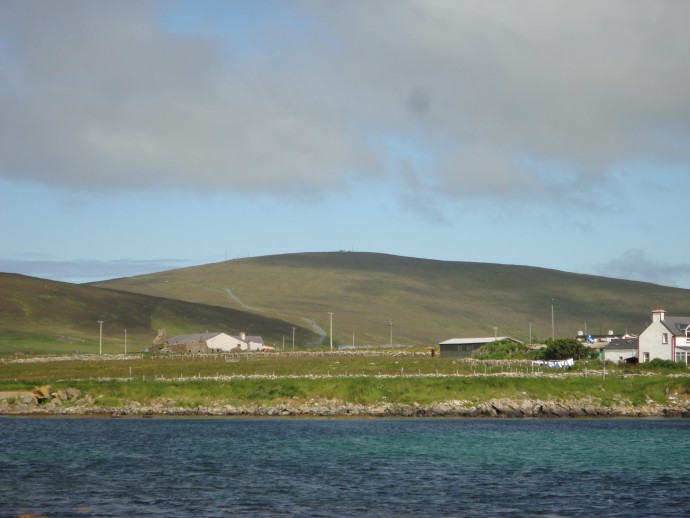 Saxa Vord from a distance.

I actually had to take a bit of a roundabout route to get to the hill, since the field on the straight line from Haroldswick to Saxa Vord was full of livestock. Instead, I followed the road around, through Haroldswick and a small hamlet of leftover RAF houses near the base of the hill. Of course the moment I set out it started raining, but it stopped by the time I started climbing.

There's an old RAF radar station at the top of the hill, so there's a tarmac road which goes all the way up, and I simply followed that, getting passed by the occasional car. It was a bit of a slog near the bottom, but got easier as I went and I made good time. (I've found that many of the hills in Shetland are dome-shaped, and therefore make for quite easy going.) I actually lost sight of the top for a while and started to doubt whether I was climbing the right hill, especially since it was taking longer than I'd thought for the others to catch me up in the van! But eventually I rounded a corner and the radar station came into view. I think I was within about 20 minutes of the summit when Allen and the others finally caught me up. I don't know if they lollygagged spectacularly in Haroldswick, or if my fitness is getting better, or both, but I had trouble convincing everyone that I had gotten than far under my own power and hadn't hitched a ride up there!

Here's the part I'm unsure about. Allen seemed to think that I wouldn't be able to get past the fences around the radar station, and therefore wouldn't actually be able to get to the summit. Figuring that he knew this place better than I did, and that I was just about as close as I was going to get, I quit climbing and got back in the van for the brief ride over the northwest shoulder of the hill. However, reading about it after the fact, it seems that it's plenty possible to get to the summit of Saxa Vord. Other people seem to have done it, after all.

Can anyone enlighten me? I'd hate to think that I got nearly to the top of the northernmost Marilyn in Britain and then turned around.

Since I don't have any summit views, here is a picture of me near the northernmost bit of Unst, with Muckle Flugga and Out Stack behind me. Forget John o'Groats, this is the end of the earth, people! Another of Muckle Flugga (on the left, with the lighthouse on it) and Out Stack. 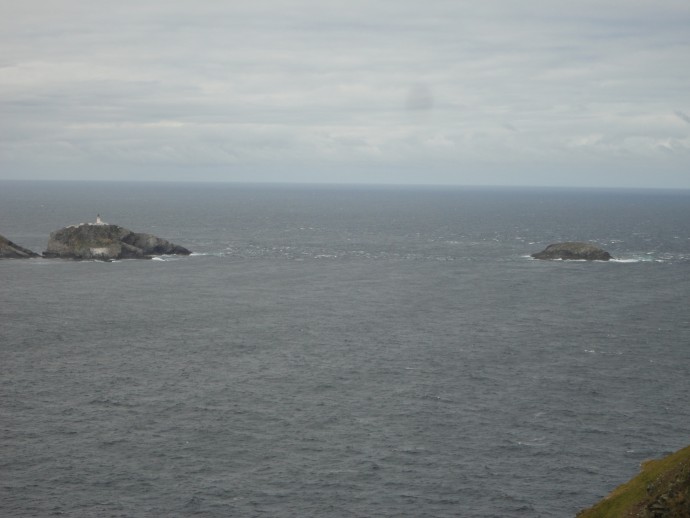 Re: A pair of Marilyns in Shetland, part 2

I think you would have come to this gate below the summit: You used to be able to call in advance to gain access to the actual summit. Not sure if this is still the case.

Re: A pair of Marilyns in Shetland, part 2

Looks like that person went down the way I went up. I got a view of Hermaness when we went to the north side of the hill, though. And going up the tarmac, no dive-bombing bonxies for me!