With the wife still in London and the weather forecast again looking great I decided on another trip up to Dalwhinnie for the second Saturday in succession this time to tackle A'Bhuidheanach Bheag and Carn na Caim. This time there was significantly more cloud around on the train trip up from Edinburgh than there had been the previous week. But on arrival at Dalwhinnie station, again on time at 09.20, the weather was superb. 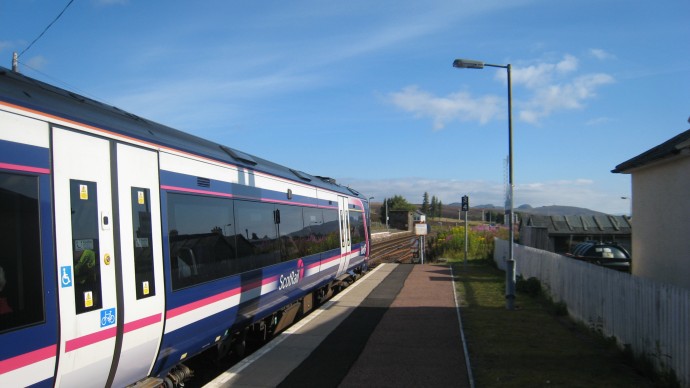 Another sunny day on arrival at Dalwhinnie station

However looking up to the day's destination there was cloud enveloping the top, despite blue skies in most other directions. 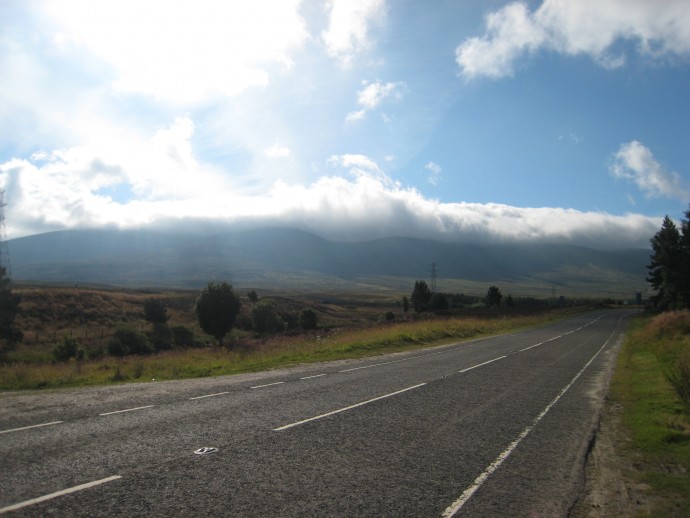 It took 30 minutes to walk south from Dalwhinnie station along the A889, legging it over the A9, through the snow gates, to the start of the track upwards. 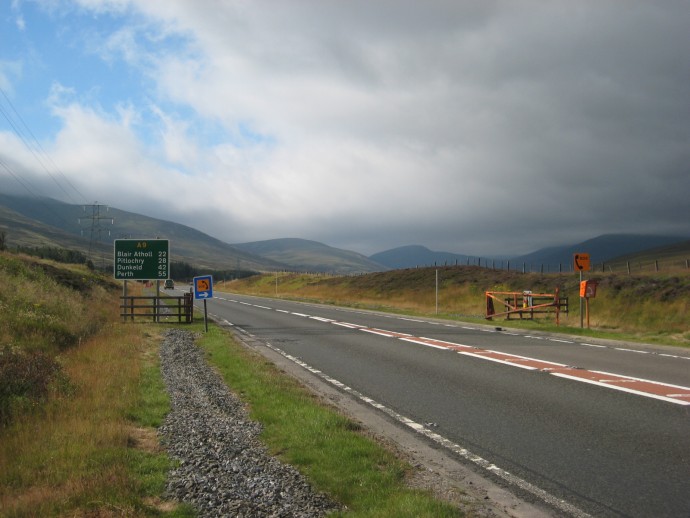 Past the snow gates on the A9 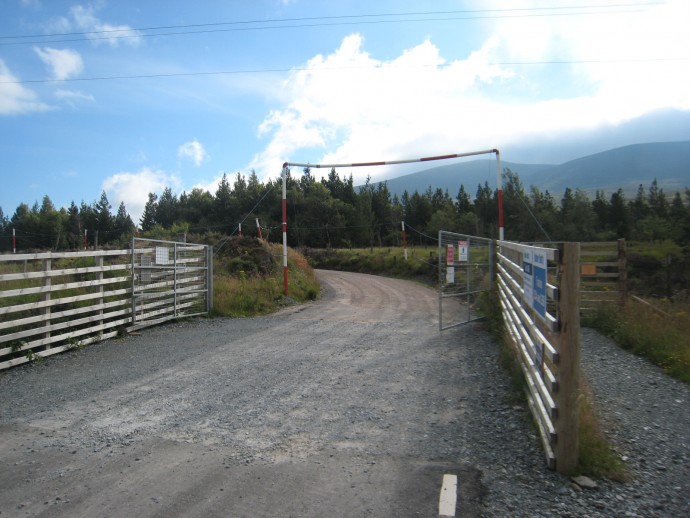 There are site works at the start of the track, the track upwards just past it, which although quite stony in places allows height to be gained quickly and easily, affording great views back towards Dalwhinnie and beyond. 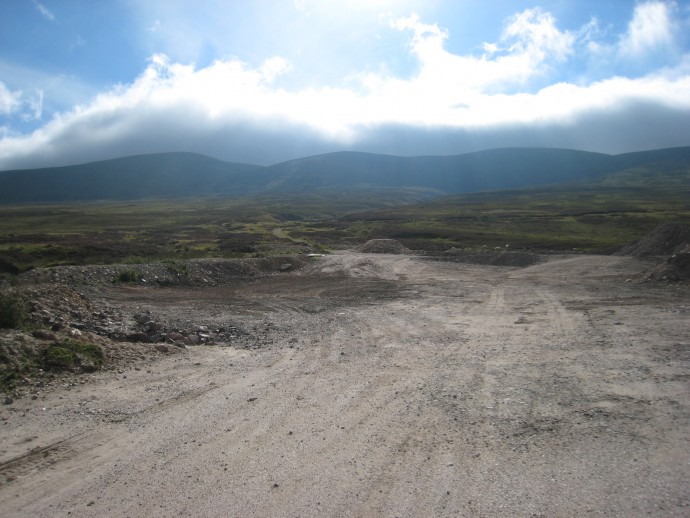 Through the site works 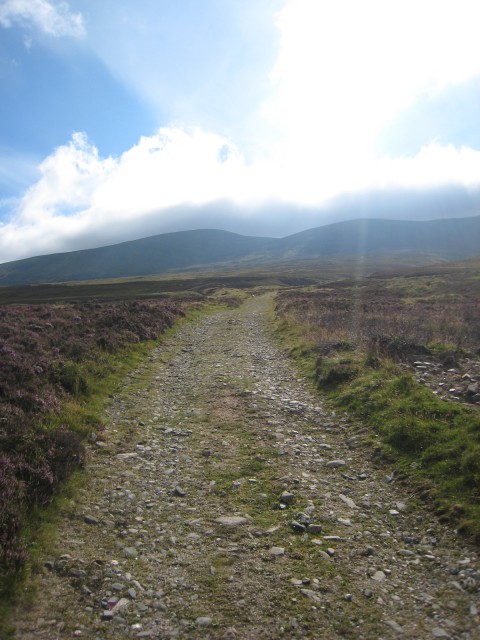 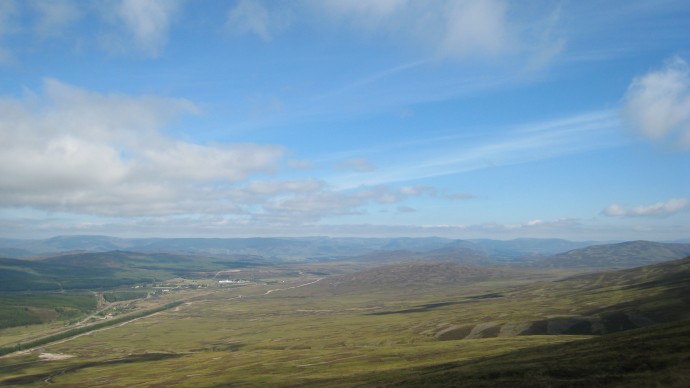 Views back to Dalwhinnie as height gained

About three quarters of the way up the track I bumped into a recognisable face and realised it was someone who sat very near me during my 7 months at Scottish Widows, small world! By the time I reached the quarry, which appears just to be quartz scattered on the ground, on the top of the plateau I was in cloud with not great visibility. I then bumped into another walker on his way down who'd set off much earlier in the day who said that it had been really bad visibility, although better now, but had decided to go back down without getting to the top of any of the Munros as he didn't want to get lost. This was all a bit of a worry as the SMC guide mentioned that under certain conditions navigation may be problematic to the top of A'Bhuidheanach Bheag. Anyway onwards, over a rolling very easy going track. 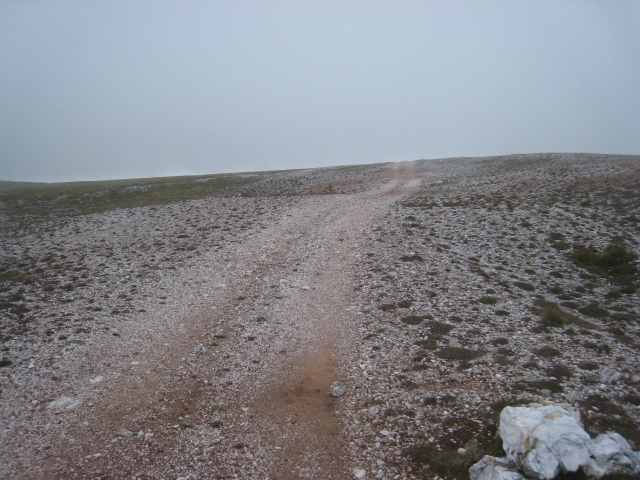 Disused quarry on the edge of the plateau 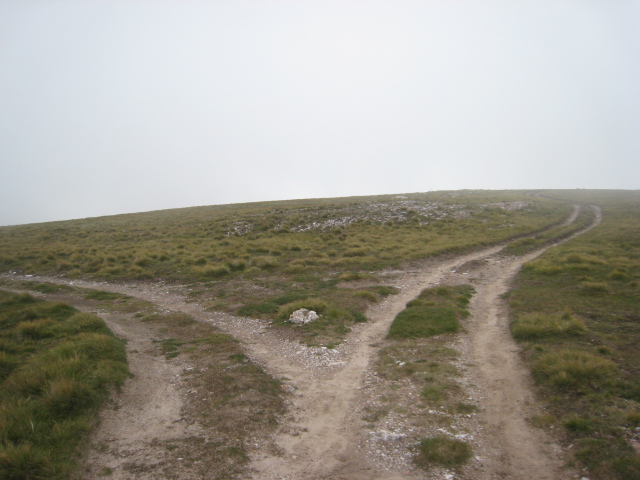 After a short time I reached a quartz marker stone & cairn on the right hand side of the track, just short of the top of A'Bhuidheanach. On the left of the track directly opposite the quartz stone there are some handy markers showing the way. 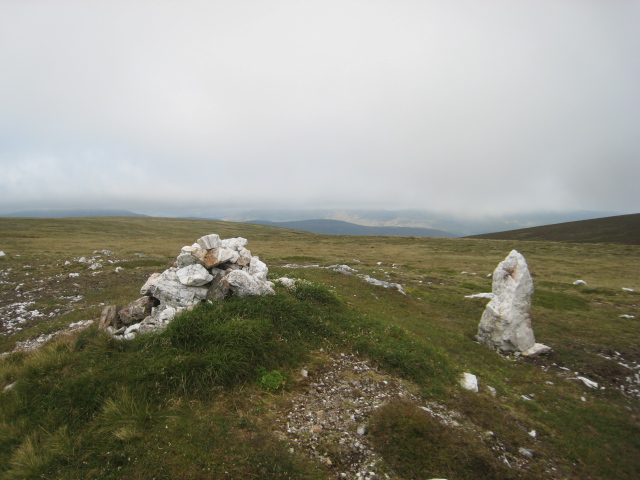 Quartz marker near top of A'Bhuidheanach 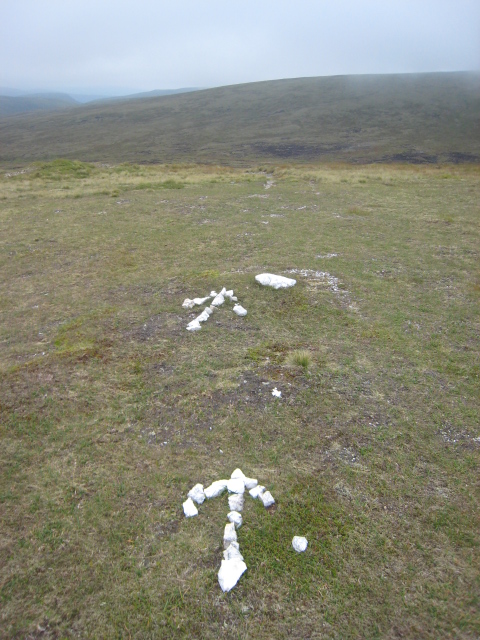 This way to A'Bhuidheanach Bheag

The track goes down around the base of A'Bhuidheanach until it crosses a stream where a grass path upwards is just about visible. Reaching the top of the path near the top A'Bhuidheanach Mhor I was still in cloud with poor visibility but fortunately, with great timing, it lifted for just enough time for me to spot the trig point at the top of A'Bhuidheanach Bheag, which I reached in 2hrs 20 minutes after leaving Dalwhinnie station (1hr 50 mins from the start of the track on the A9). 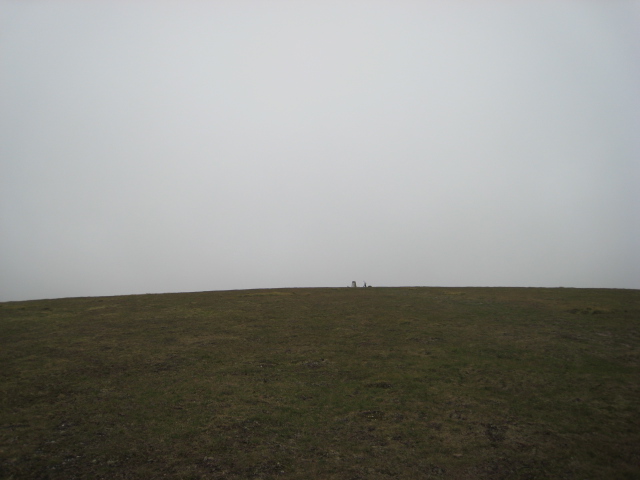 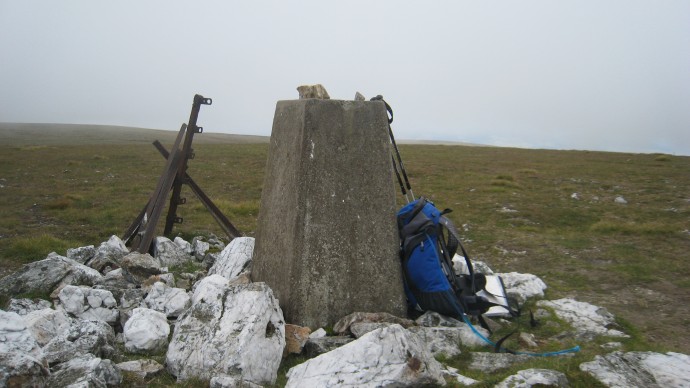 After a quick chocolate bar, that train back to Edinburgh wasn't going to wait for me, I retraced my steps back towards the fork in the track near the quarry, where the cloud had started to lift quite a bit. The track up to Carn na Caim was even easier going. It was just a question of following the fence posts when they turned away from the track towards the top, which I reached in 3hrs 40mins from Dalwhinnie station (3hrs 10mins from the A9). 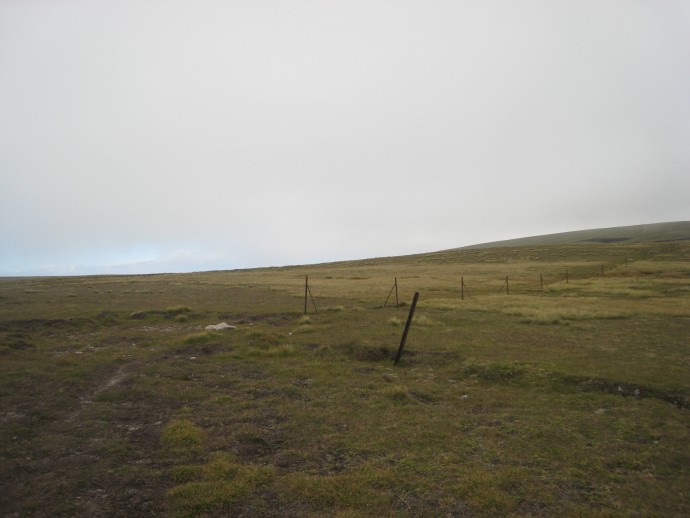 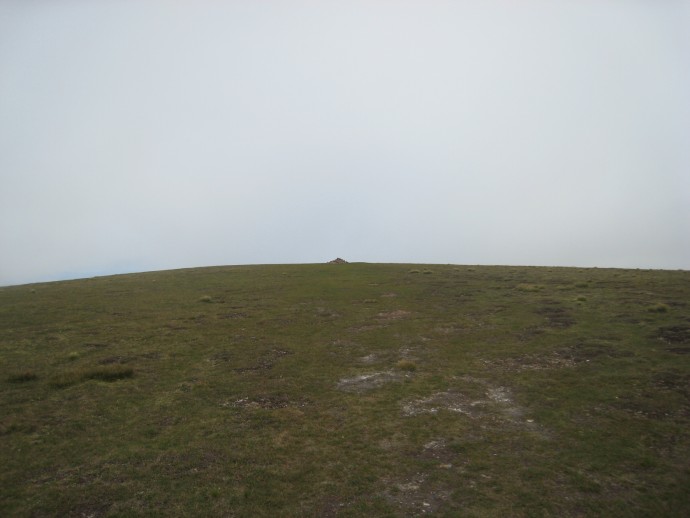 First sighting of the top of Carn na Caim 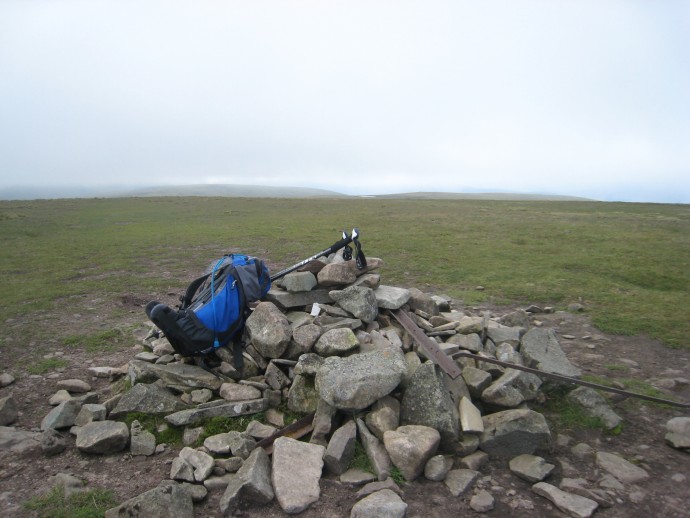 I was going to stop for a quick cheese and pickle sandwich but just at that moment some more thick cloud rolled in accompanied by some gusty wind so I decided to eat it on the way back. By the time I reached the quarry again the cloud really had started to dissipate at least from that side of the plateau. 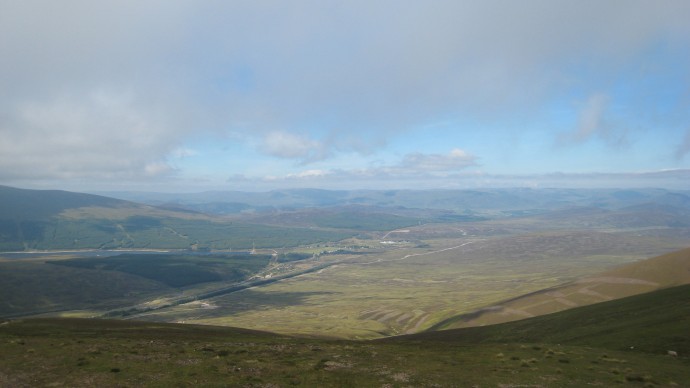 Views of Loch Ericht & Dalwhinnie on the descent 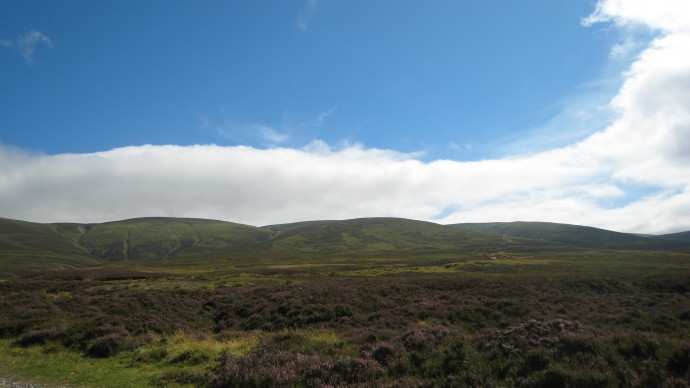 I descended, my feet feeling every stone on the track, reaching the start of the track by the A9 4hrs 55mins after starting from it. I again stopped for an ice lolly and cold drink from the service station in Dalwhinnie, reaching the station in around 6 hours from starting which was still in glorious sunshine. 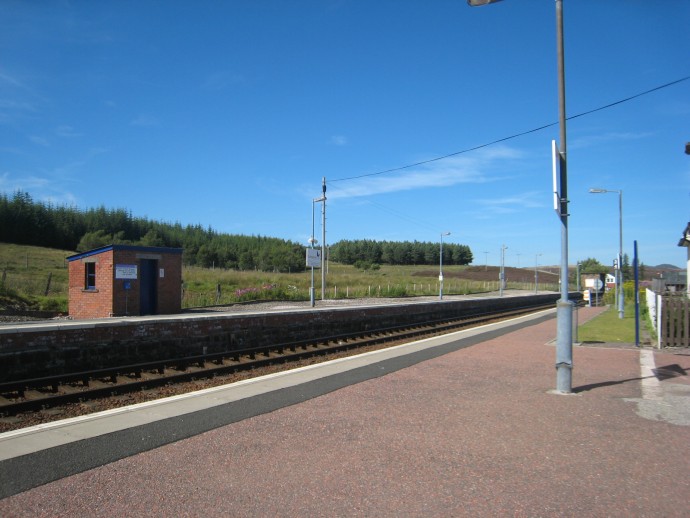 Waiting for train back to Edinburgh

Excellent report. I will be attempting this exact route myself on 25th May 2013 as my first two munros. Attempted this at the beginning of May but had to turn back due to heavy snow.

Thanks for a great report. I came unstuck today in the mist which came in after I started. I was put off by the remarks that you had read as well. Bit of a pity, but I really was not confident, so I went down. You made great time for your trip. may you have many more great adventures!