On beginning the ascent of Creag Dhubh I was impressed from the beginning on how steep and intimidating this little mountain is.From the road it looked like it would be hard work and the first part was.
Heading from the little parking area beside the road the climbers path started to get steeper all the time.Crossing the boulder field was fun too before what was a really steep bit of land following a fence next to some forestry.

After following the fence I made a as direct course for high ground as I could.Deep bracken made this hard going hiding any boulders and with every bit i brushed by seemed to unleash the next 30 or so midges to attack me.I didn't want to hang around here.

I reached the path on higher ground at a stile and continued up again steeply before the final ascent revealed itself.Again I was so impressed this mountain delivers everything.The views were vast in all directions.
After the summit it was back in the direction I came but at the stile continued along the ridge following a path.

If I ever come to this area again Creag Dhubh is a mountain I could easily do again. 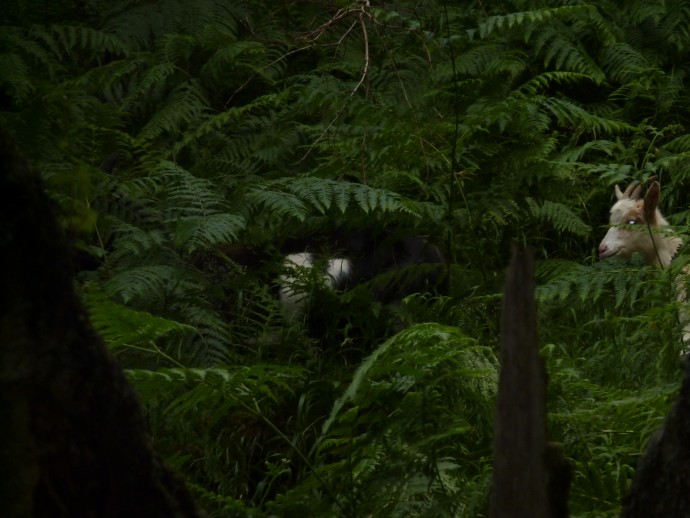 Wild goats roaming in the woods. Looks a little cracker Paulo...but man those goats hidden away in there look bloody evil

It is a fine looking hill which I have eyed up many times but never managed to climb yet. Did you know there are 76 Creag Dubhs in Scotland? Amazing the things you learn on walkhighlands meets. So educational!

That many Creag Dhubh's Graeme D ? I think I may need to edit the title by adding Newtonmore in brackets, otherwise in the future it could get confusing.

Thank you for your post ChrisW it did spook me a little bumping into those Goats in the woods.I wasn't expecting that.I have been looking at some your posts this evening on your explorations of Canada.All I can say is wow, you are lucky.

Really must go do this hill, say that every time I pass it, which is quite often. Looks great, thanks.

Graeme D wrote:It is a fine looking hill which I have eyed up many times but never managed to climb yet. Did you know there are 76 Creag Dubhs in Scotland? Amazing the things you learn on walkhighlands meets. So educational!

So is that Dhubh or Dubh