Bagged two more Munros and discovered another fascinating old ruin in the neighbourhood... And subsequently, the backlog of unwritten reports is growing... growing...
It will take me a couple of weeks to update everything...

The route described below was walked on the same day as my earlier visit to Dunphail Castle (http://www.walkhighlands.co.uk/Forum/viewtopic.php?f=9&t=25874) and should really be in the same thread but as my TR's are getting painfully long, I decided to deliver this one in two parts.
There are many different options to explore the banks of River Findhorn, this is just one of them:

our_route.gpx Open full screen  NB: Walkhighlands is not responsible for the accuracy of gpx files in users posts
There is parking space by Daltulich Bridge. We left our car there and started by admiring the views down to the river: 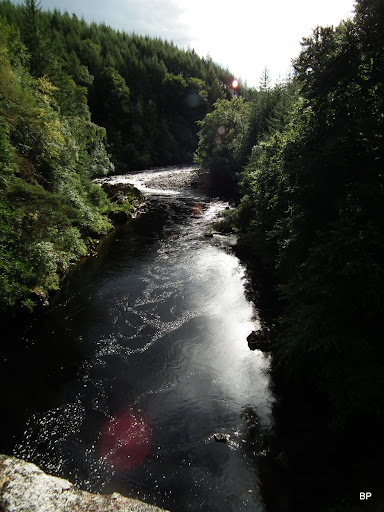 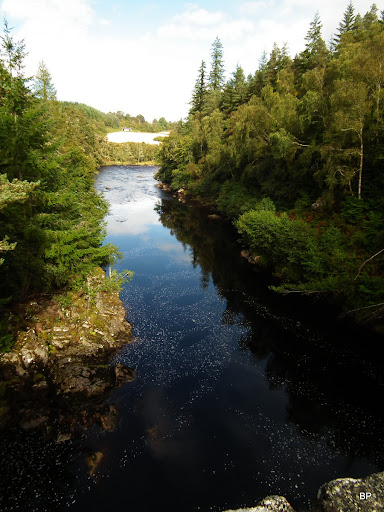 Just past the bridge we located a path diving NE into the forest: 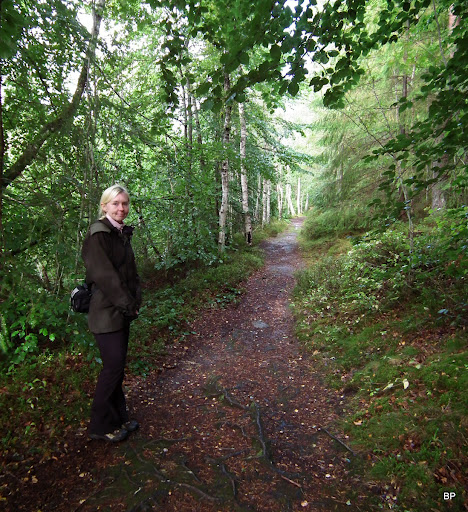 This path goes all the way to Randolph's Leap and on a longer trip it would be possible to walk all the way to Logie House, maybe even further (we didn't explore it ourselves but it is marked on the map all the way to Sluie). And there are some great forest attractions here to see, like big trees... 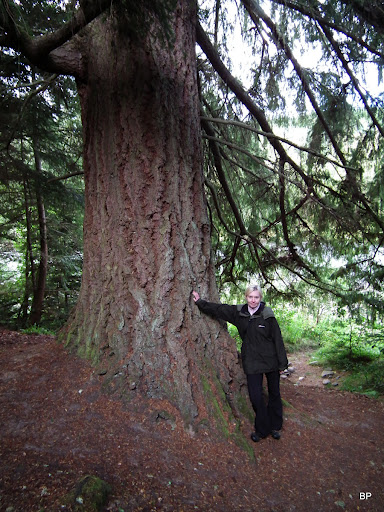 ... and in autumn time, different species of mushrooms (aaaah, my favourite subject again 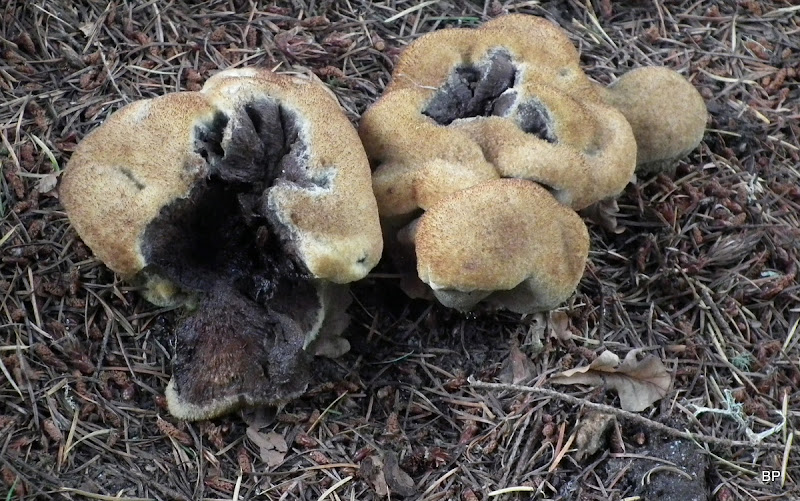 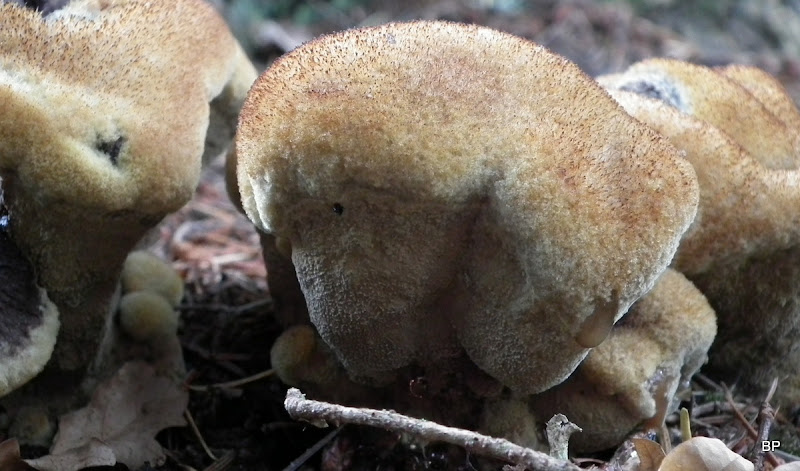 It is possible to take a short detour down to the river: 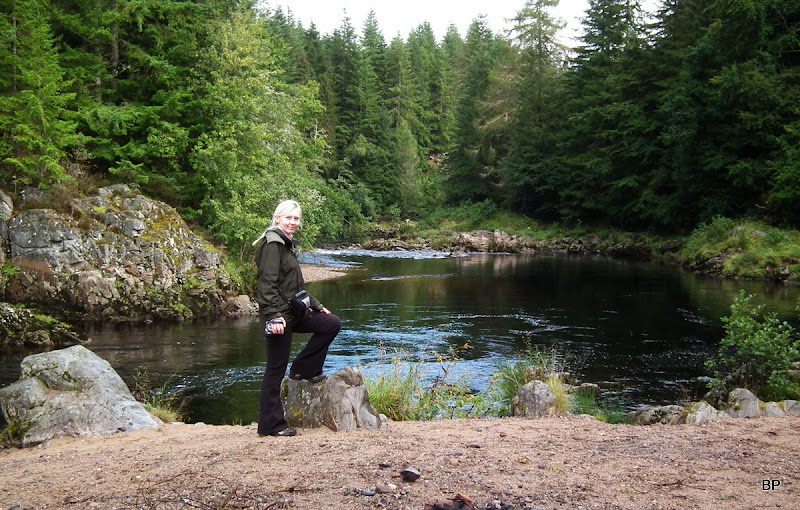 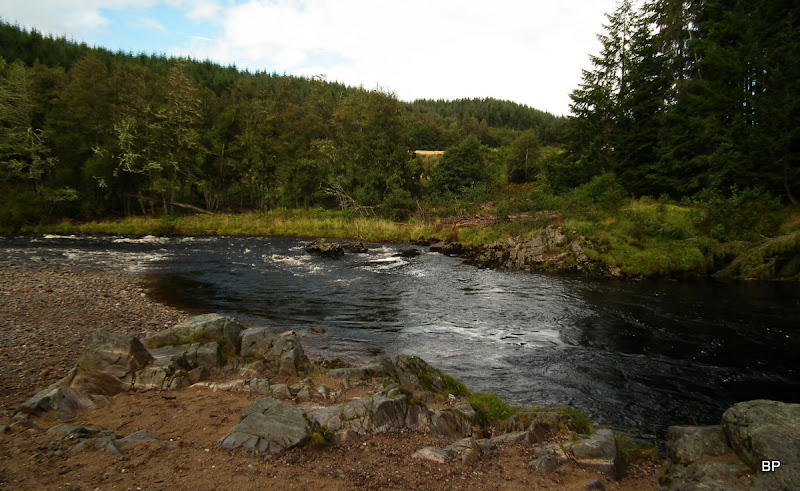 It was a quiet day and I spotted a couple of jumping fish... They were too quick to catch the in a photo though... 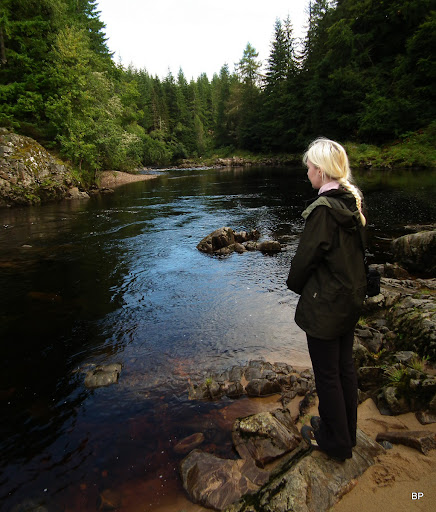 We returned to the path and walked further along the river, climbing higher up the banks: 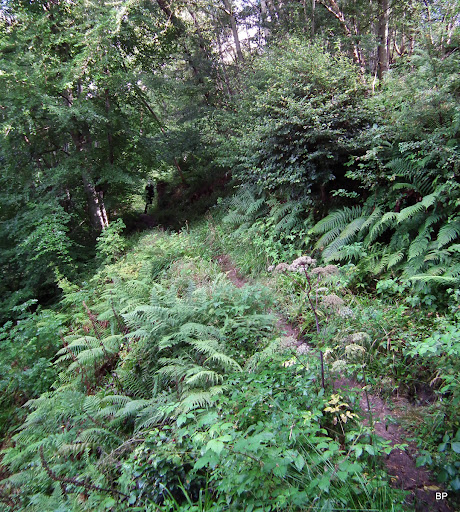 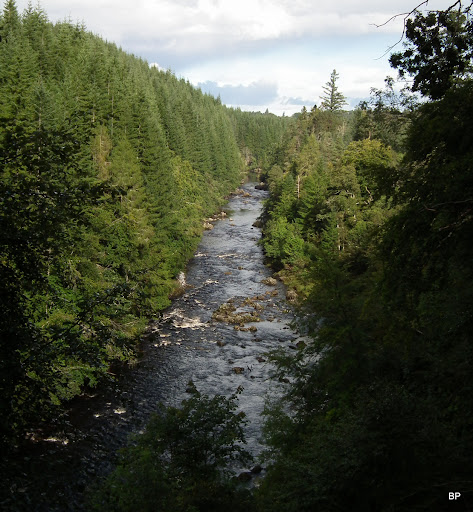 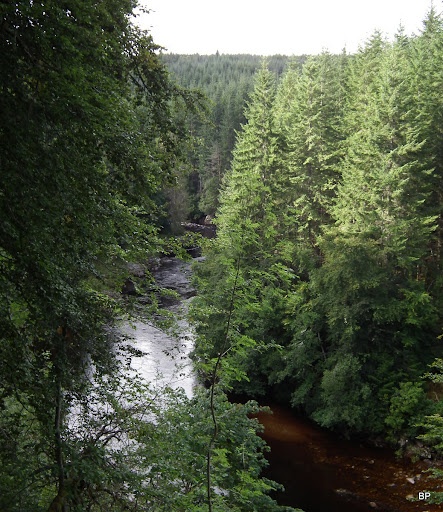 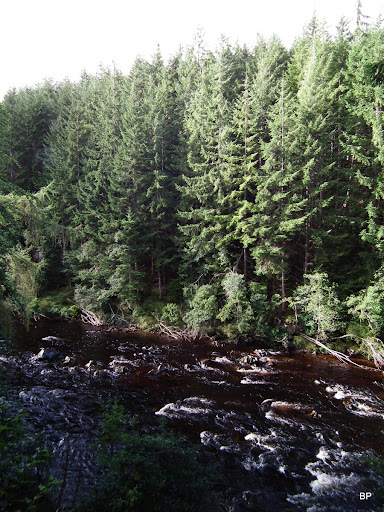 The path has a few boggy moments but apart from that it offers easy going. In one place the old passage has collapsed but a wooden footbridge was recently built to make the traverse possible: 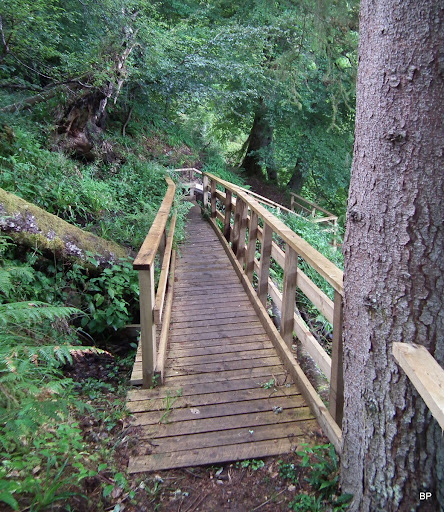 I enjoyed walking in this quiet deciduous forest... 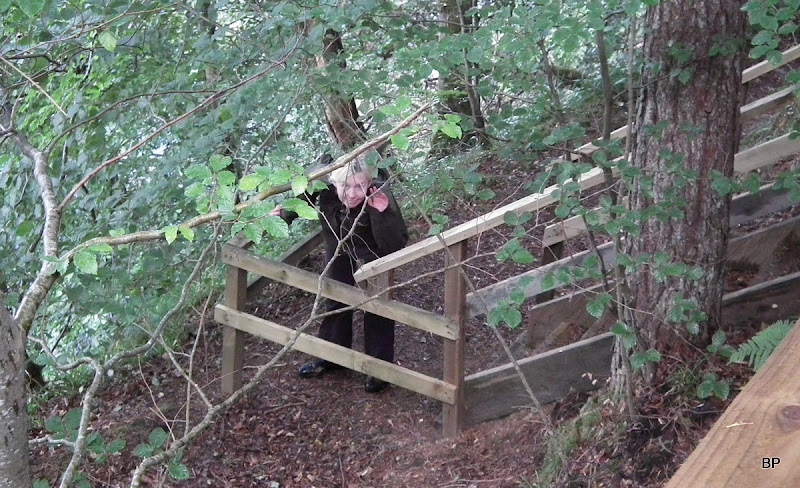 ...not to mention the fungi encounters

like this - a bitter beech bolete (Boletus calopus). As its name suggests, not exactly edible

Well, it doesn't contain any poisonous substances but the taste is so bitter that a single individual in a whole pot of soup makes the whole dish inedible. Apart from that, it looks similar to the poisonous Satan's bolete. Another reason to leave it where it grows. It makes a great autumn postcard though... 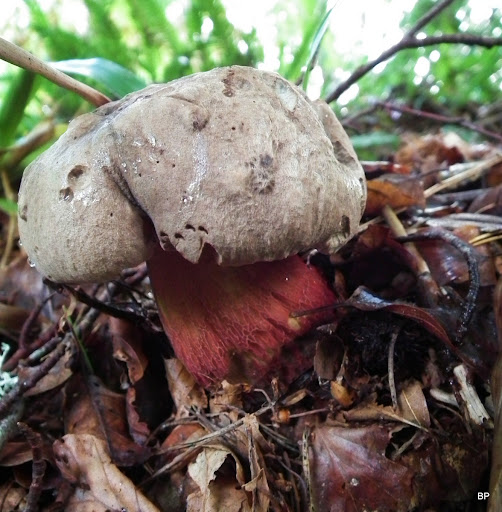 Another late September species- hedgehog mushroom (Hydnum repandum). This one is edible though of a low yield, but rarely grows in large amounts. The name of this fungi refers to the small white spines (5–6 mm long) present on the underside of the cap: 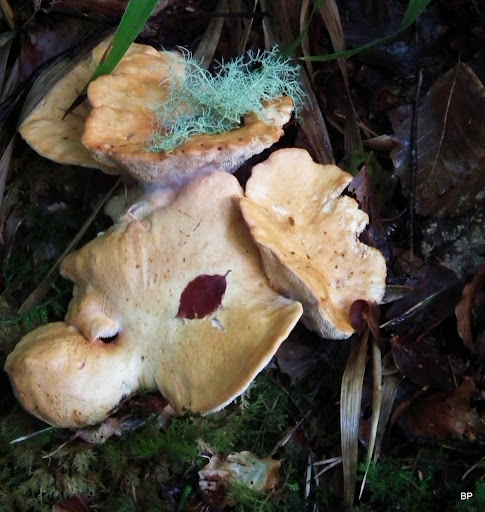 Shaggy ink cap (Coprinus comatus), very characteristic in shape, only young friuting bodies are edible. As soon as the gills turn black, the mushroom begins to secrete a black liquid containing spores, which explains the name ink cap. Despite of it being edible I never bother to pick this fungi - it turns black and dissolves itself to a yucky mush a few hours after being picked. But I like seeing ink caps in their natural environment - they look so cool 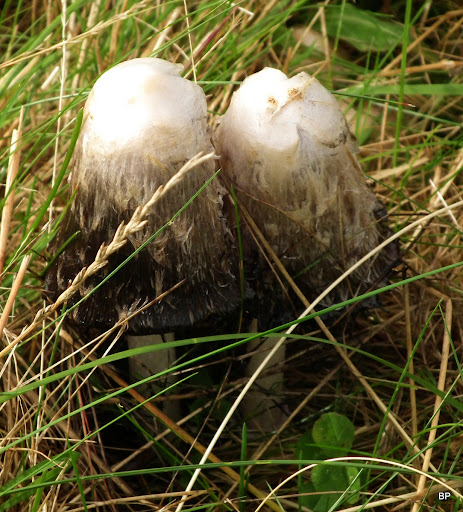 Closer to Randolph's Leap, the path is better: 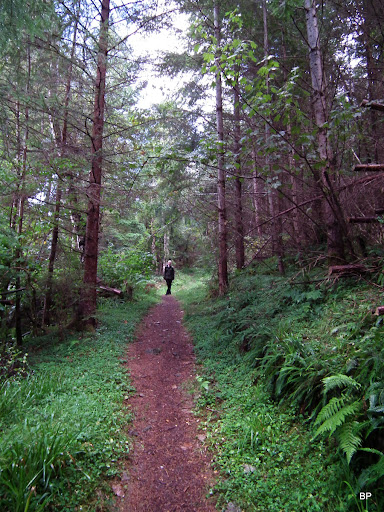 Another heavy shower was heading our way so we decided to shorten our walk by picking a branch of the path joining the forest track, soon we were up on the tarmac road: 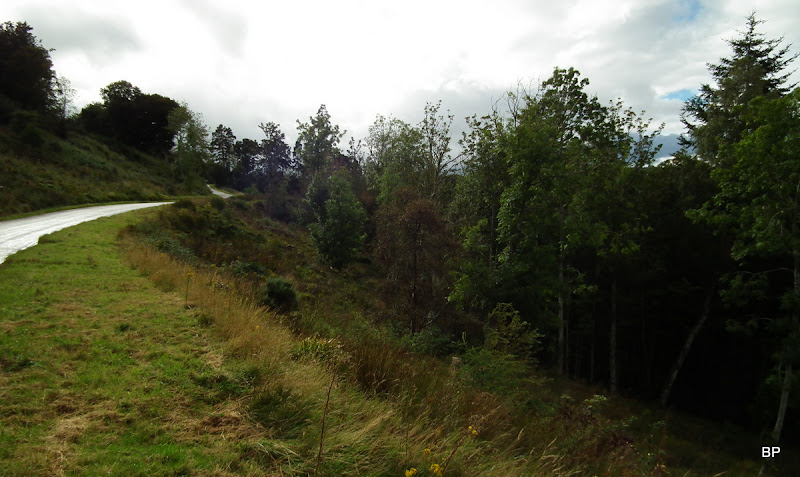 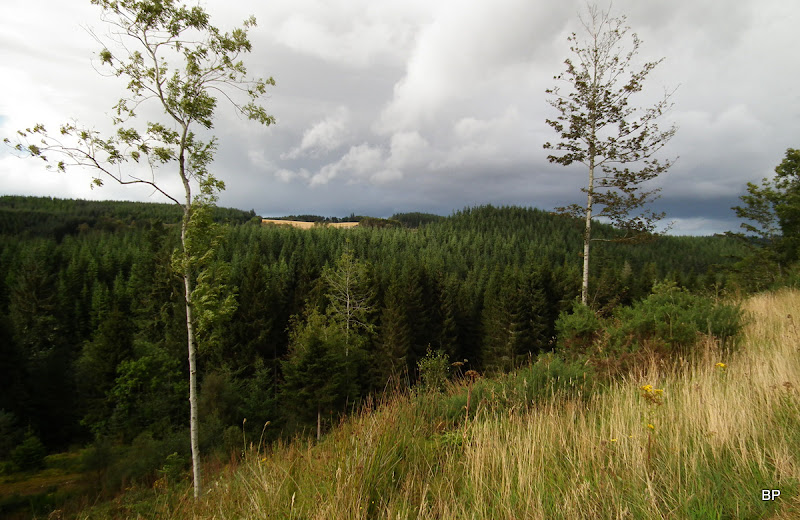 A short return stroll along B 9007 took us back to Daltulich Bridge and the car. We arrived just in time to avoid the rain...
The following day was predicted to be very similar weather-wise: windy and showery. I was desperate to climb something at last but had to satisfy my addiction with only a small hill. Small it might have been but it definitely had the wow factor. The story will come soon. Meow!

A fine wee wander BP, love the variety of fungi you managed to find. When I was a young man I used to love picking mushrooms for the table as I just couldn't afford them from the supermarket

I still think they were the best tasting mushrooms I've ever eaten.
Glad you got back before the rain came along

Excellent little report this - and some great pictures of the mushrooms.

Good job you haven't publicised finding Ceps or Chanterelles otherwise the place would be flooded with Eastern Europeans by now! Tesco are now selling 'wild mushrooms' that are handpicked by teams who go scouring fields, woods and hillsides - much to the annoyance of fungal forayers like me....

I have my own places for ceps, summer boletes, orange birch boletes, chanterelles and other yummy treats, but I'm not crazy and I will not reveal these secrets of mine

I'm a great fan of mushroom picking as long as it's done in a sustainable way: 1. taking only the fruiting body without destroying the vegetative tissue underground. 2. Leaving old specimen to spread spores. 3. Leaving the inedible and poisonous mushrooms intact (they are an integral part of the ecosystem). 4. not leaving any rubbish behind, of course

Just one thing to make it clear: I have professional background in biology (Masters in environmental protection, PhD in toxicology) so I can say I'm a specialist in poisonous stuff and I know exactly what I'm doing and what I'm picking. But I'd like to underline that there are species of fungi so dangerous that 1 small fruiting body can kill an adult human (death cap, destroying angel, panther cap, orange web cap, false morel...). So if you not sure about a particular mushroom, don't take it with you. I hope I didn't sound like an old preacher though