A great looking weekend weather-wise, but I wasn't planning to go too far from home. Instead I decided to make the most of Sunday morning and get out on the bike. Most of the sub 2k Marilyns within 30 miles of Inverness I have cycled to, with only a couple more doable in that way. As they would take a full day, I opted to revisit Stac na Cathaig, which was my introduction to the area immediately south of Loch Ness a few years back. There are 6 sub2k Marilyns in the immediate vicinity, not to mention some other worthwhile unlisted bumps. The whole area resembles a sort of mini-Trossachs, although much quieter and without much in the way of a footpath network (in this case the area could benefit from a few more walkers as it is incredibly hard going on most of these hills).

Loch Duntelchaig.gpx Open full screen  NB: Walkhighlands is not responsible for the accuracy of gpx files in users posts
I cycled up the long hill out of Culloden and crossed Strathnairn, stopping to give my bike a wash in the river on the way past. Plenty more hills took me to Farr - this has been something of a regular cycling circuit for me in the past, but it was my first visit in over a year. The most scenic bit of the route is past the tiny Loch a Chlachain, where the road runs right along the shore. Another couple of minutes took me to the outflow of Loch Duntelchaig, where I left the bike. There is a complicated weir system here, as this loch provides backup to the Inverness water supply (which is primarily drawn from the nearby Loch Ashie). 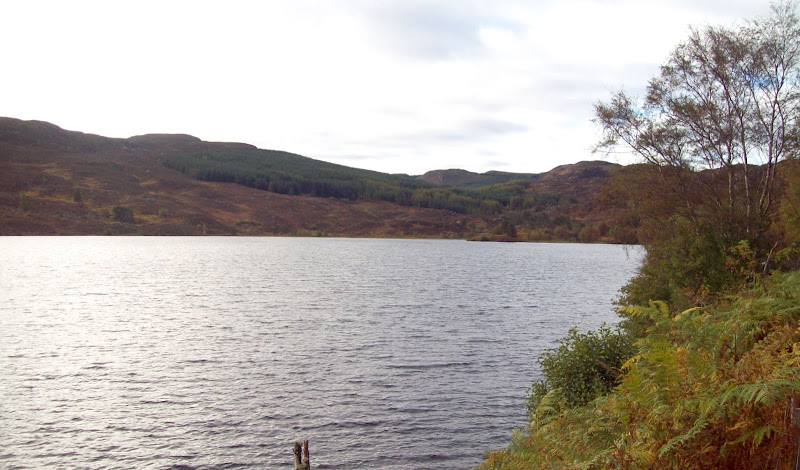 I wanted to head straight up onto Stac an Fhithich, which is the rocky NE end of the hill, and provides some local rock climbing (never climbed here though). I fought my way up between buttresses, the route being thick heather and bracken with ankle-trapping boulders underfoot. My previous ascent had been from the Loch a Choire direction, and I thought my new route might be easier going, but it wasn't. I seem to say this in almost every report, but this hill has some of the toughest terrain in the country on it, making the distance and ascent feel double what they were. 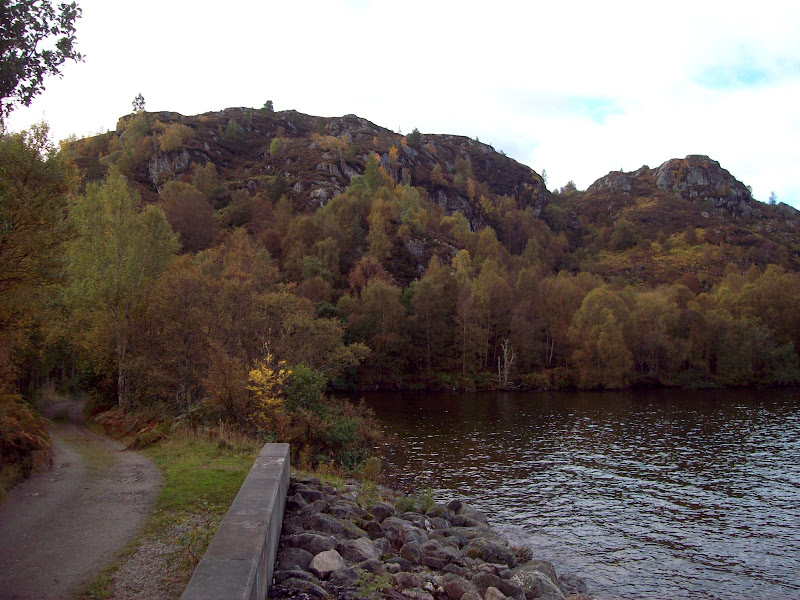 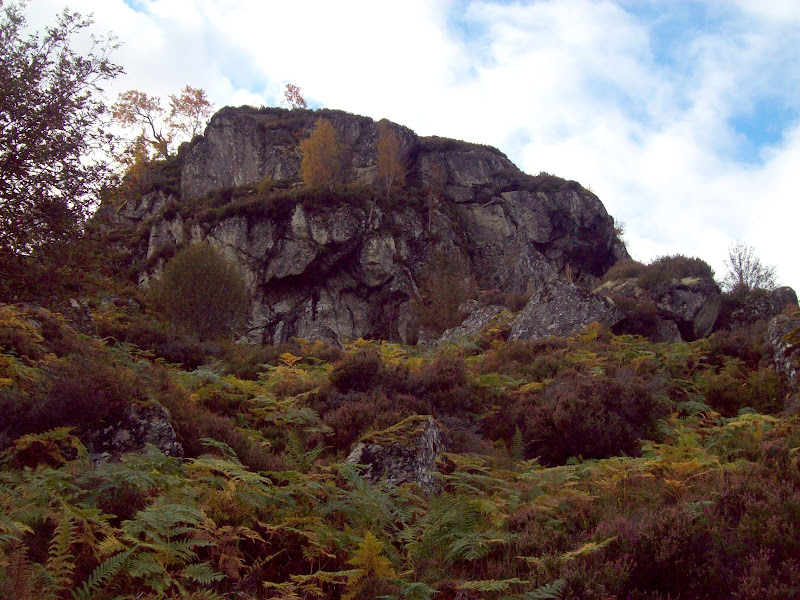 On top, mobility was still difficult, but the views were well worth it, with the autumn colours just beginning to break out - it will be pretty spectacular in another couple of weeks

. I stopped for a break on Creag an Fhithich, before carrying on across thick heather towards the summit, which was very close, but didn't seem to get any closer. 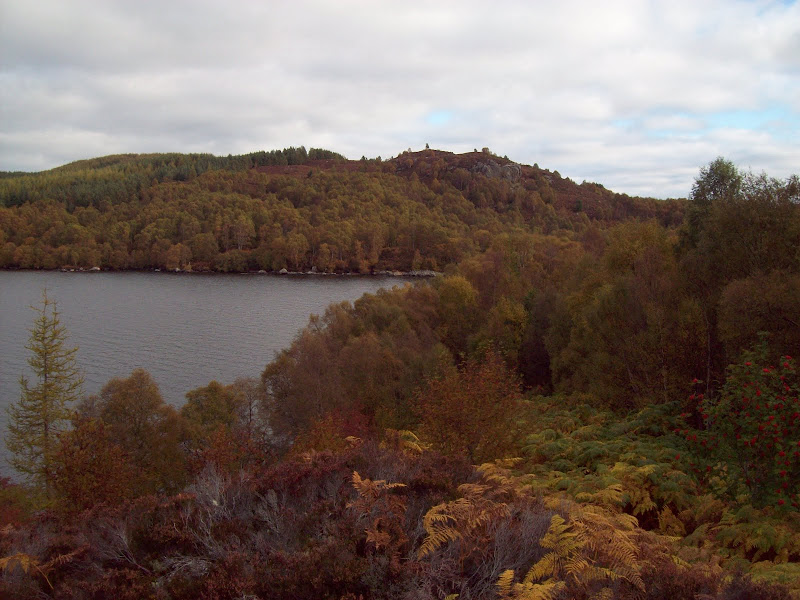 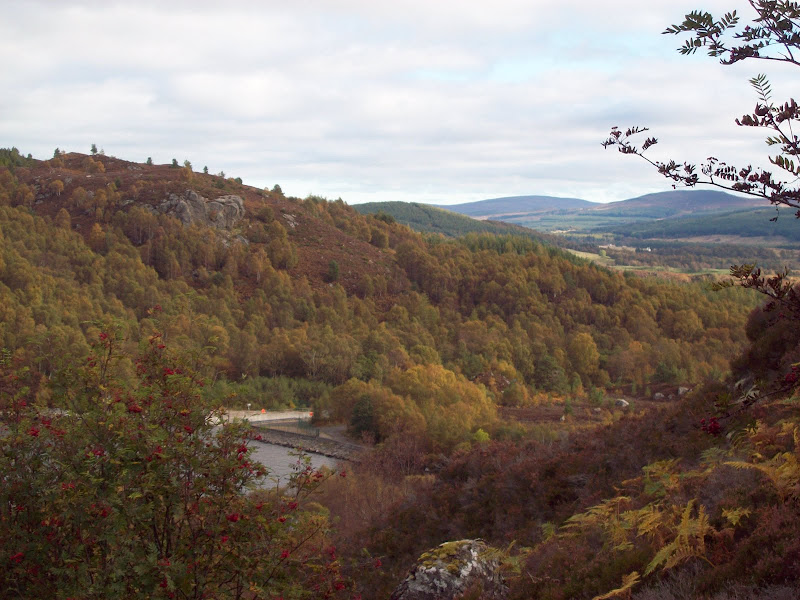 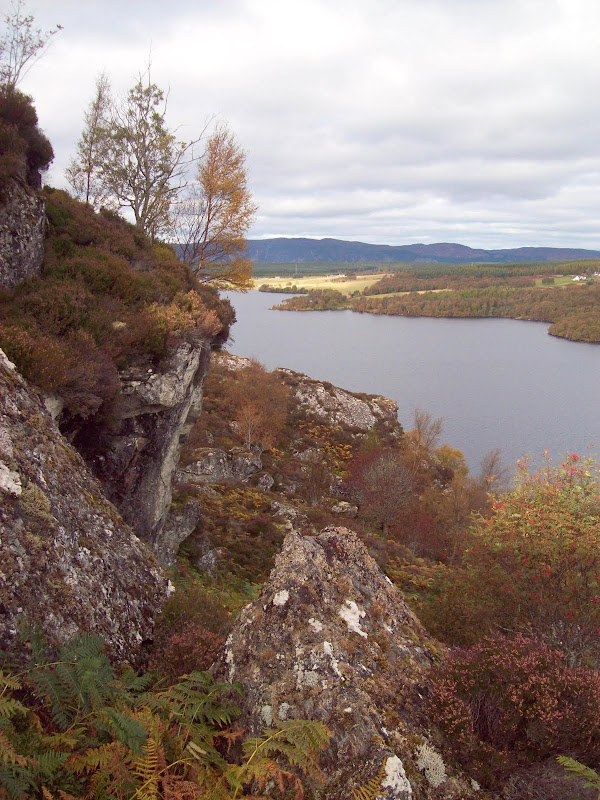 Views were opening up to the west, although the cloud was down over the larger hills. The Corbetts of Beinn a Bhathaich Ard and Sgurr na Diollad were particularly prominent, as was Meal Fuar Mhonaidh later on. 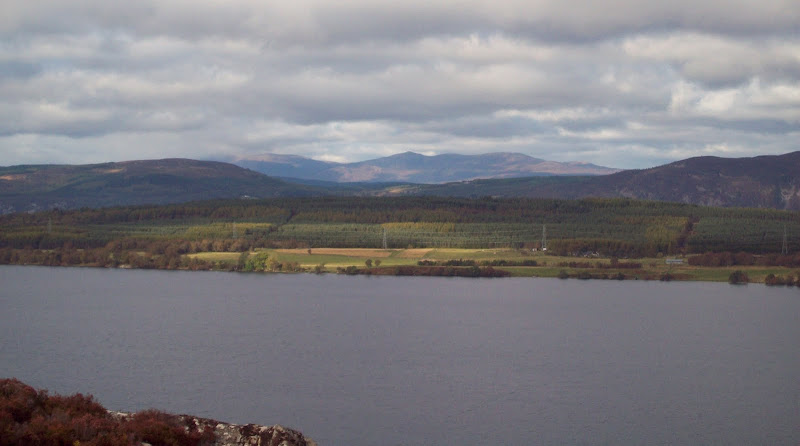 View from the top of Creag an Fhithich: 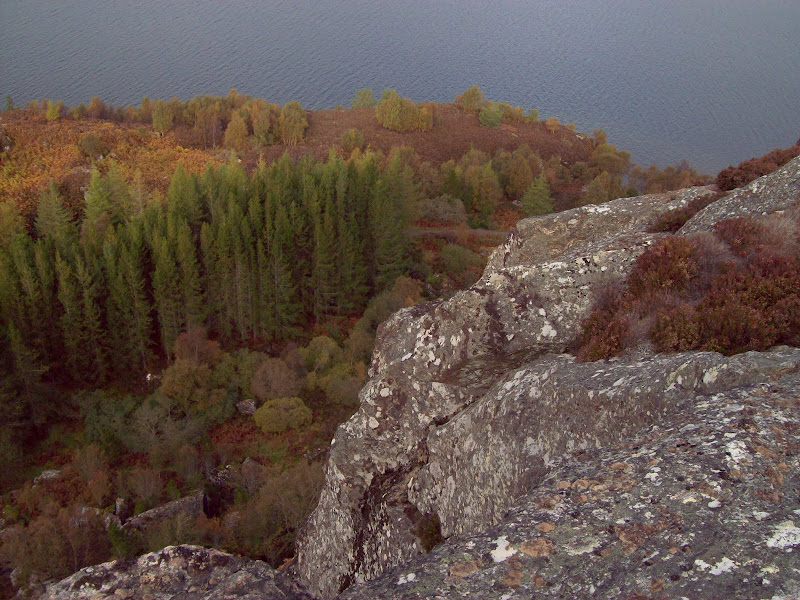 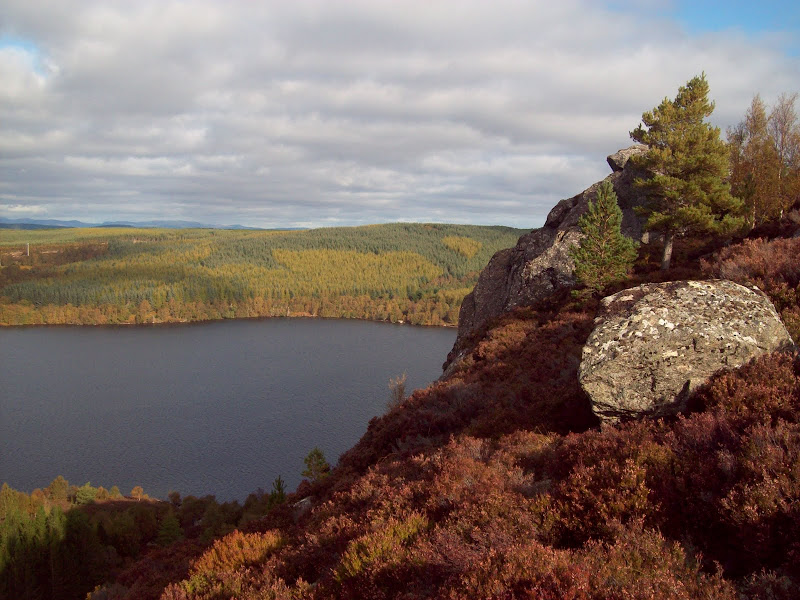 Looking towards the Affric hills: 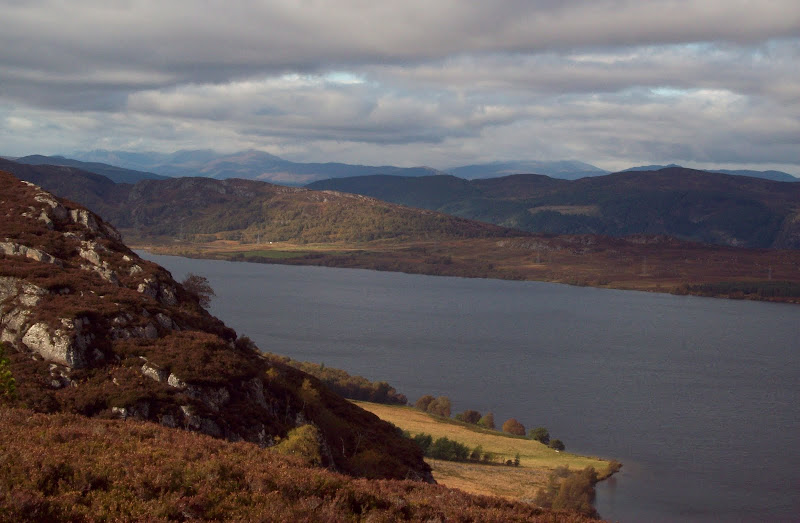 Across lochs to Abriachan and Carn a Bhodaich: 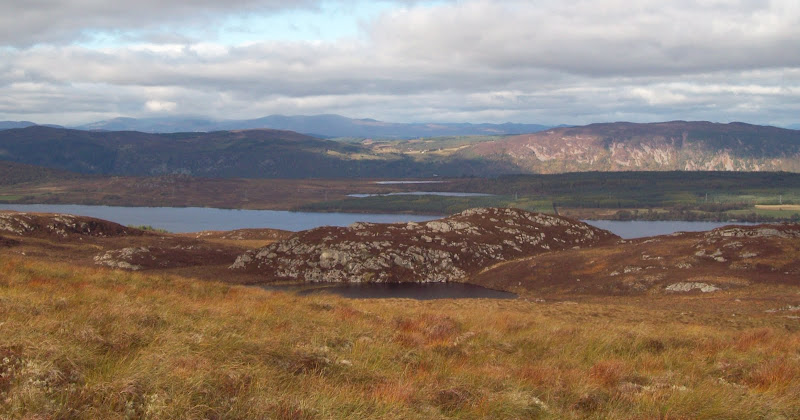 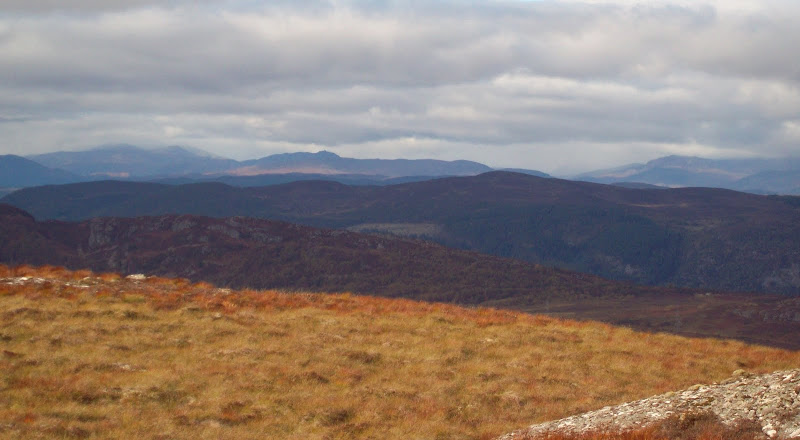 The summit finally turned up after an hour of bushwhacking (for just over 2km??), and the views south and east improved. The Monadhliath provided a fine backdrop for the other local hills, with Stac Gorm and Loch Ruthven being particularly impressive looking. 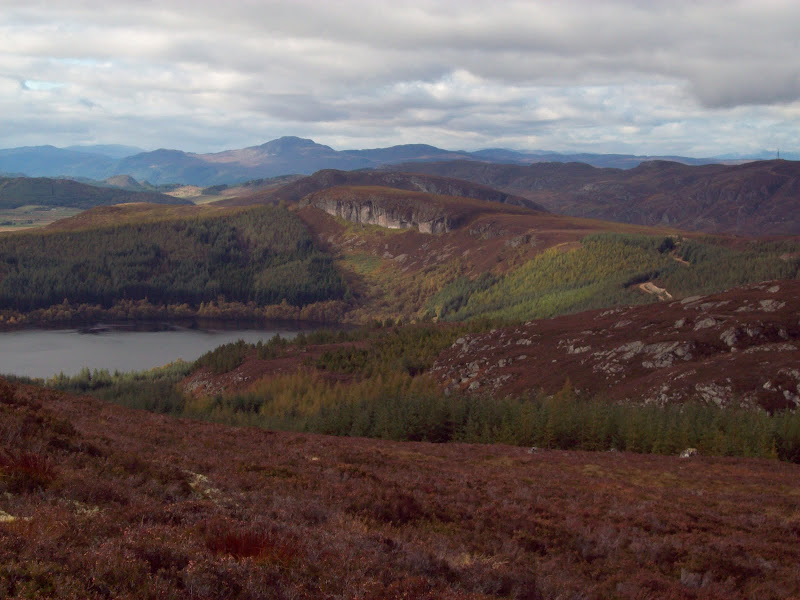 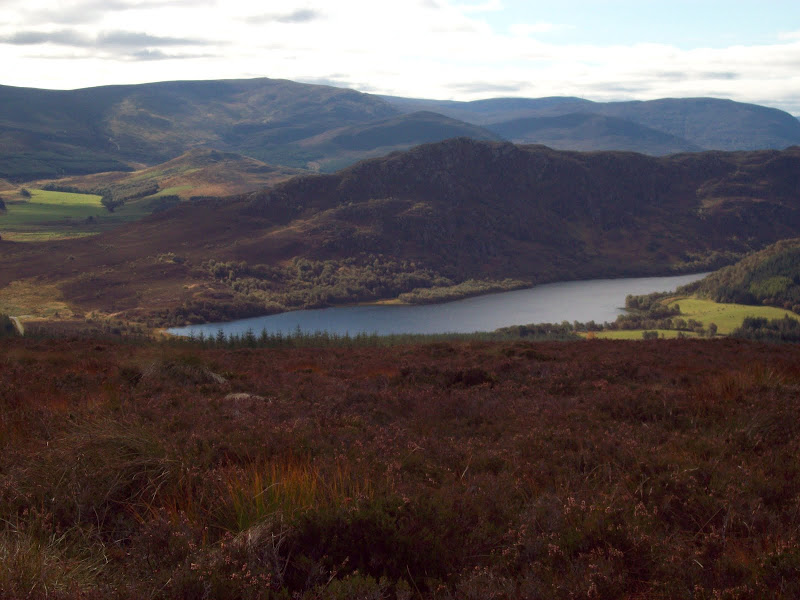 I had originally planned to circle round to the east and come back over Brin Rock and Creag Buidhe, but this was going to take much longer than the 90 minutes I had envisaged for the whole walk, so I went west towards Dubh-loch and descended the burn to the forestry track along the shores of Loch Duntelchaig. This was another fight - this time through dense conifers, although there were a couple of more open sections of forest. I got rather scratched, and wondered if I should have tried to locate the path further west. On previous visits I had struggled to spot this though, so I don't know if it would have been any better.

An easy bit of forest: 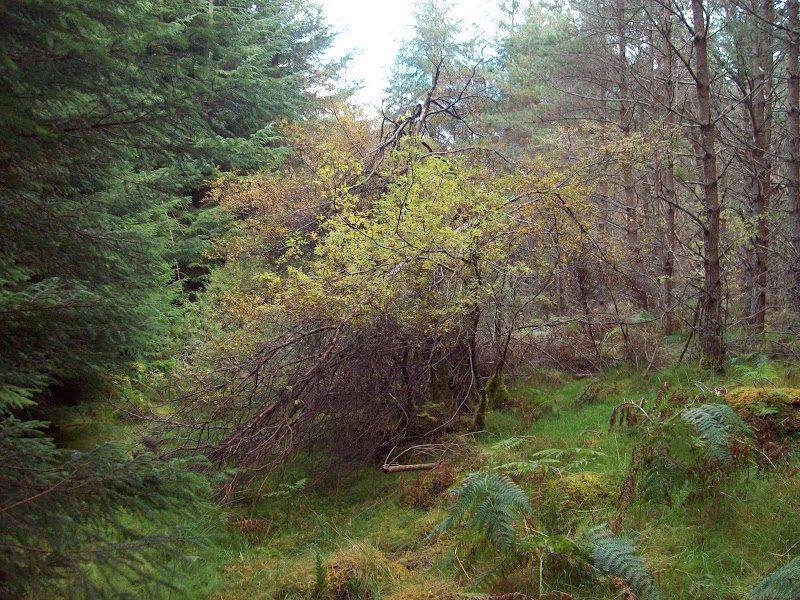 The walk back along the track was pleasant, with great views of the Creag an Fhithich crags. A nice morning out in an area where the walks don't have to be long to be difficult. 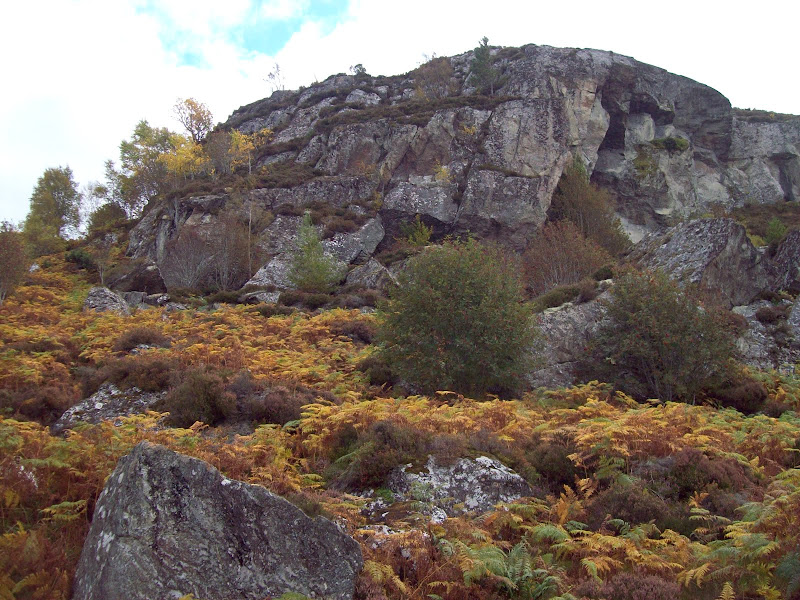 I backtracked on the bike as far as Loch a Chlachain and took a left turning back to Inverness. Once up the initial hill this was a lovely fast descent into town.

You get into some interesting parts of the country.

whatever it's called it is a real beauty of a short hike with a good stretch of the legs on the bike to get there. The thick bracken with ankle snappers beneath doesn't sound like much fun but the views are well worth the effort by the look of the pics, nice to see autumn arriving - my favourite time of year, I missed most of ours as we had family over for two weeks and it came and went in 3

Glé mhath a bhalaich .... i use this side of the loch on route to Inbhir Nis its quieter and prevents my road rage erupting