Hooray, I have reached double figures!!

After my solo jaunts on Beinn Ghlas and Ben Lawers back in September, I was keen to be accompanied on my next Munro - I feel that I need to build up my confidence a bit before going out alone again! I've stuck to straightforward Munros so far, and made good use of the WalkHighlands instructions and maps. I think as time goes on I'll also get more confidence when it comes to navigation and 'proper' map-reading. All in good time.... (and definitely before I set off on my own again!)

My boyfriend and I took some time off work last week for a wee "staycation" - 5 days on the West Coast - Inveraray, Oban, Mull, Iona and Staffa. I was determined to get Munro number 10 in during this time, and Day One seemed the best opportunity (could then spend the rest of the holiday relaxing and recovering!). Ben Vane seemed perfect location-wise, although the forecast really wasn't great for Thursday 4th. Drizzle, and ... sleet.

However, the idea was in my head now and with October/November looking so busy with work/weddings/other commitments, I wasn't sure when I'd get the chance to get out there again this year. And I so badly wanted to bag number ten.

So I decided to defy the Met Office and see what happened. We got to Inveruglas around 11.30, after a pit-stop in Callander and a catch-up with some of my former colleagues at Rabbies. Of course, we couldn't see Ben Vane from here but generally the views were okay, if a bit cloudy. We crossed the road and walked past the pipes at Loch Sloy. The path ran alongside the road for a wee bit before heading through a gate. Network Rail were out and about, and there was a fair bit of activity going on at the sub-station further up. Thrown a bit by all the big lorries, we kept going up the hill on the road, although thankfully my lovely man Dave realised that this wasn't right before we'd gone too far. One of the lorries had been blocking the way we were supposed to be going, but we managed to get round and alongside the sub-station. Now we could see the task ahead, and it looked straightforward, if sharp and steep.

We crossed the bridge, said hello to some friendly cows, and began picking our way through a very boggy bog. This was instantly tough going, as each step required concentration and precision. I understand it's boggy at the best of times, but today had clearly followed some heavy rain so it did seem bad - or clatchy as we'd say in the Borders

Eventually we got through the flat part and headed up to the shoulder of Ben Vane's ridge. We began our steep climb up. The bog continued. The rain started. We were rewarded with this: I felt relieved to reach the rocky section of the 'up' as it meant that the really soft stuff underfoot was over - for now! Little did I know how relieved I'd be to reach the boggy section on the way down...!

The next part was tough-going. I was enjoying it initially, until the false summits got the better of me. It was certainly steep, and the path was so eroded that the loose rock provided a new challenge. Concentration was key, although tiredness and achy muscles were beginning to hinder our progress. We stopped fairly regularly and took turns to 'lead'. The rain came and went, and the views unfolded with every turn. It was wonderful! I was so chuffed to have views. I especially enjoyed the way that Loch Lomond opened up to us - I wasn't sure if we'd be able to see the southern end of it, but soon enough the islands came into sight. The best part for me was seeing Loch Arklet and Loch Katrine open up behind the Inversnaid Hotel. I spent a lot of time driving the crazy road from Aberfoyle to Inversnaid (and back) in a bus when I was a tour driver guide, and as much as I'd enjoyed the views the drive gave me, seeing it from this angle was a real treat. I took a moment to appreciate my surroundings and to think about how fortunate I am to live in such a beautiful country.

Back to the task in hand. At no point could we see the summit of Ben Vane, so it was difficult to know how far we had to go. I kept thinking - and saying - "we must be almost there, we must be". But each 'summit' unveiled another behind it. Morale was low. All of a sudden we met 4 women who were on their descent - these were the first people we'd seen all day! We asked if the next 'summit' was The Summit. No, unfortunately it wasn't but it was the penultimate one! They also said it was the worst one - and it was. We did a bit of unexpected rock climbing and scrambling, but finally - finally - we reached The Summit!! 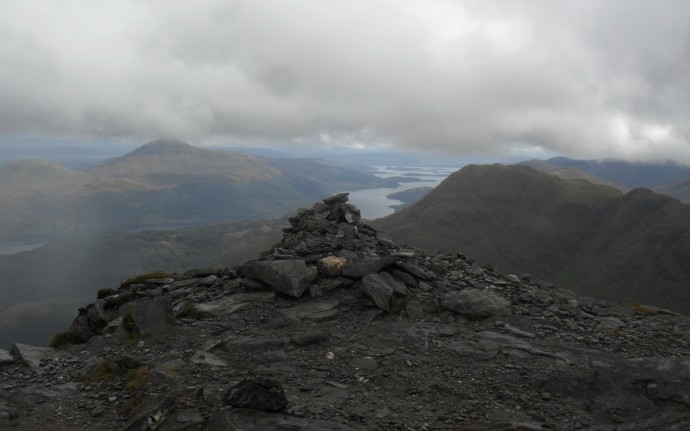 Hooray! I was so thrilled to stand on the summit of my tenth Munro! What a feeling to reach double figures! Only 272 to go now!!

We didn't spend long at the summit - being up that high meant that we were in a rain cloud and we were freezing!! We were hungry too - so decided to get lower as quickly as possible and get some food in us.

We chose a different way down off the summit than the way we'd scrambled up. We hadn't seen this option on the way up, but it was a slightly more straightforward way down. Our poles were surplus to requirements at this stage as we needed both hands to scramble down, so we threw them down ahead of us. I was a bit worried about the scramble down - both hands, but my in particular my right hand - were freezing and I didn't think I could grip the rock very well. I assumed Dave was having the same problem - forgetting that his circulation works far more efficiently than mine! In a very romantically practical gesture, he took my hands in his and nursed them back to life

We stopped for our lunch, although not for long as the cold got the better of us. The descent was fairly brutal. Those loose rocks were playing havoc with our progress. I longed for the safety of the bog! Eventually we got there, and once again picked our way through it.

When we reached the farm road once again, we caught up with the four women. We were relieved to get back onto the road, although with a mile and a half or so to go, our legs were like jelly and we longed to get back to the car! We reached the car shortly after 5, exhausted but pleased to have had such a successful day.

It may be the 282th Munro but it was a challenge! The Drovers was a welcome sight... White Strand of the Monks, Iona

Congratulations with number 10! Onwards to 20

Ben Vane was my 5th munro and I remember being daunted by its steepness and all the crags. Well done!

Well done! It is more tiring than it looks from the start, You got some good photos too

Well done,,great result. Ive done Vane twice and the first route was a lot easier,,right up to the dam, the up Behind Vane and on to Ben Dubh,,coming over to Vane from the North..Second time,,was by your route,,god it might be the smallest Munro, but its tougher than a lot ive done... Upwards and on to more...

Well done Helen! It's fantastic isnt it when you think you are going to miss out on the views then the clouds open up for you.