Well, as Kev and John have posted their reports of slightly differing routes/itineraries already, I guess I'd better present my version of events too, featuring a third route/itinerary on the Tarf Hotel trip.

I left Perth bright and early, conscious of the old Astra's increasing irritation at being pushed much beyond 60mph and sauntered casually up the A9. I was first into the car park at around 9.30 and hastily set about methodically rearranging the fuel stocks at the bottom of my pack. The car park was surprisingly busy with a large group of "ramblers" of a "certain vintage". CurlyWurly soon pulled in, with Kev and Walkaboot close behind in the Batmobile, followed by the "surprise package" of the morning, MC a.k.a. Carol.

After the introductions and the obligatory photos of the happy, smiling walkers about to embark on their long-awaited adventure, it was off up the track into Glen Tilt. As we got to know one another a bit better, the conversation covered a varied range of topics from the drawbacks of life in London, to the advantages of dog ownership and the relative merits of different breeds to a life working with shite! Yes you read correctly - shite!

Beyond Gilbert's Bridge and Auchgobhal we finally shook off the large group of ramblers who had clearly reached the conclusion that they had gone far enough for one day. Now I come to think of it, I was beginning to think along the same lines considering the amount of coal and wood stuffed into the botton of my pack. As we headed around the corner towards Marble Lodge (not much of a lodge and certainly not marble - disappointing to those who have conjured up an image in their minds of some kind of Taj Mahal like structure), the view begin to open up of the two rear Munro summits of the Beinn a' Ghlo massif. Janet now steered the conversation towards a discussion about what everyone was having for dinner, which was my cue to suddenly remember that I had forgotten the pasta for my spicy sausage and vegetables in pasta with mascarpone sauce. Oh well, sausage and vegetables in mascarpone sauce it was going to be then! 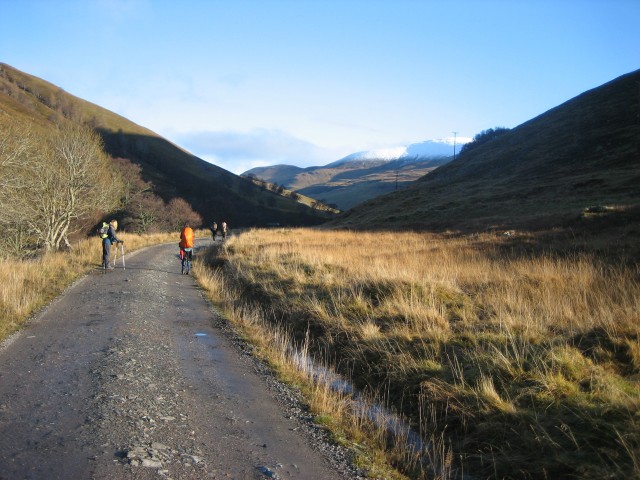 Approaching Marble Lodge, with views opening up over Beinn a' Ghlo

At the bridge just beyond Marble Lodge it's time for another set of group photos and then it's on to new territory for me. I had been up the glen as far as this bridge before but never any further. 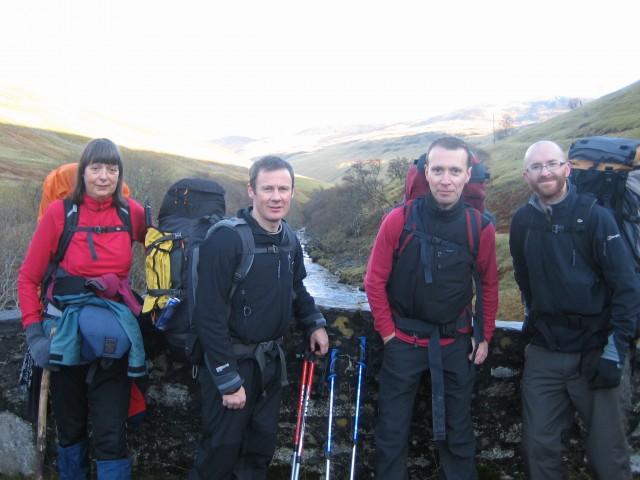 Posing on the bridge

By now the conversation had progressed to heady topics such as whether one would consider taking a place on a team to attempt an ascent of Everest if the opportunity ever presented itself. We stopped for lunch just behind the farm at Chlachglas, just where the track up Carn a Chlamain leaves the glen and doubles back up the hillside. First of all though we had to wade through a veritable lagoon of mud to reach the start of the track and a decent spot for lunch, conveniently located next to a standpipe under which we took turns to rinse our boots off.

It's a steep haul up the first section until the track doubles back on itself, but the effort is rewarded with fine views further up Glen Tilt towards Forest Lodge and again over the remotest peaks on Beinn a' Ghlo. 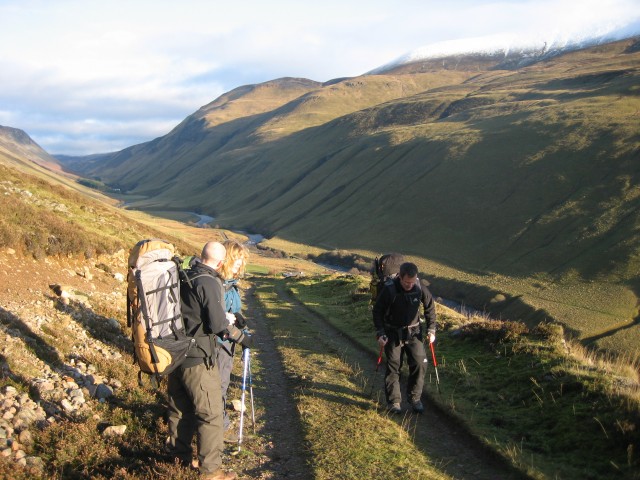 Looking back down towards Forest Lodge 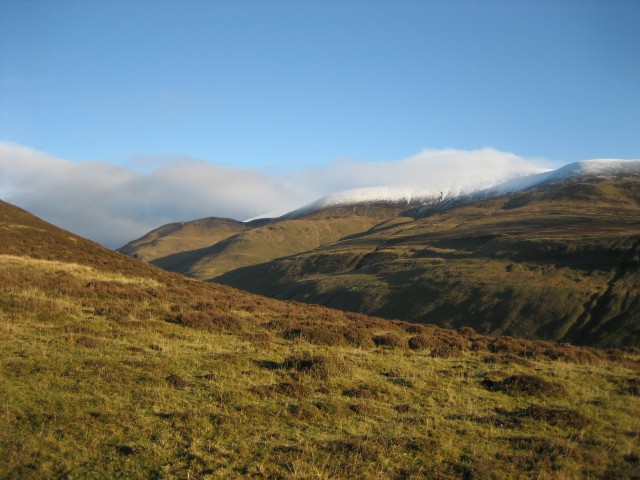 The unpronouncable and impossible to spell Munro, with Carn nan Gabhar peaking out at the back

The snow covered summit of the Munro soon comes into view – looking ahead it is a glorious picture with Carn a Chlamain sitting bathed in sunlight under a clear blue sky. However behind us and to the west, the sun is already beginning to dip low in the sky as the short days of late November begin to catch up with us. 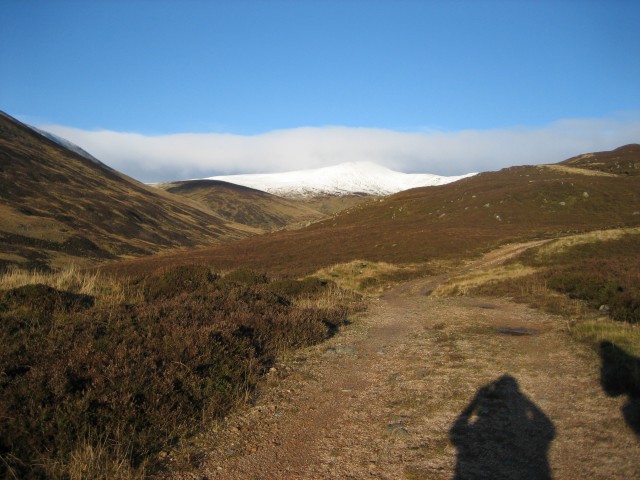 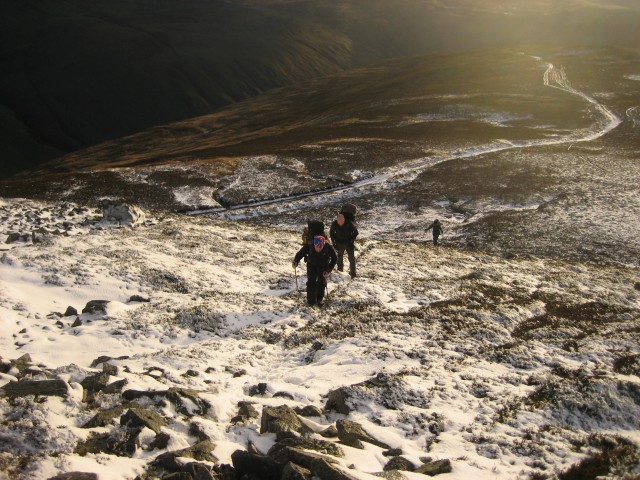 Darren, Kev and Janet being chased up Chlamain by the fast setting sun

We plough on and soon reach the ragged snow line, beyond which we decide to leave the track and take a more direct line to the summit. It looks like it isn’t too far away but then out of the greyish whiteness ahead the real summit cone appears, somewhat further away round the rim of the coire. 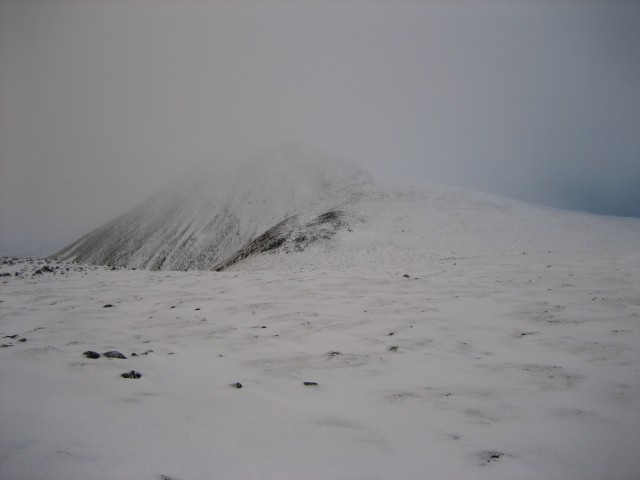 It is quite remarkable at this point how inky black it looks down in the glen below where the sunlight is no longer penetrating and it provides quite a contrast with the scene on the ridge. 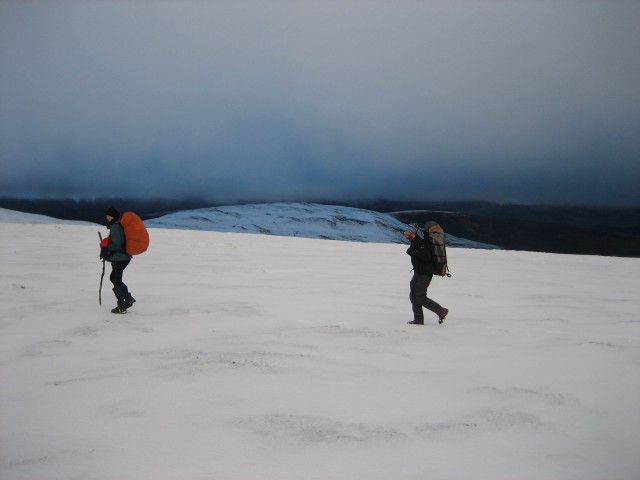 Carol and Kev in the light, Glen Tilt in growing darkness below

Conscious of the need to press on, I put my head down at this stage and strike out for the summit with a new resolve, trying as much as possible to use the footprints made by the guy we had passed earlier on his descent. It is still hard going though and every now and then I break through the snow and end up knee or thigh deep before having to haul myself out of a hole.

Eventually I reach the cairn in whiteout conditions and take a quick bearing for the bothy before waiting camera poised for the others to come over the crest. 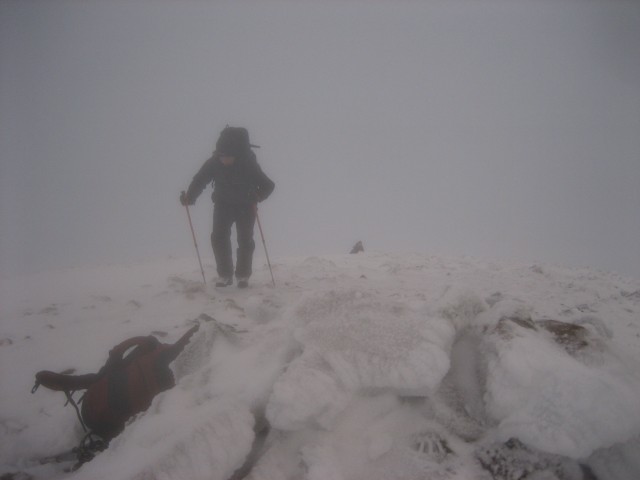 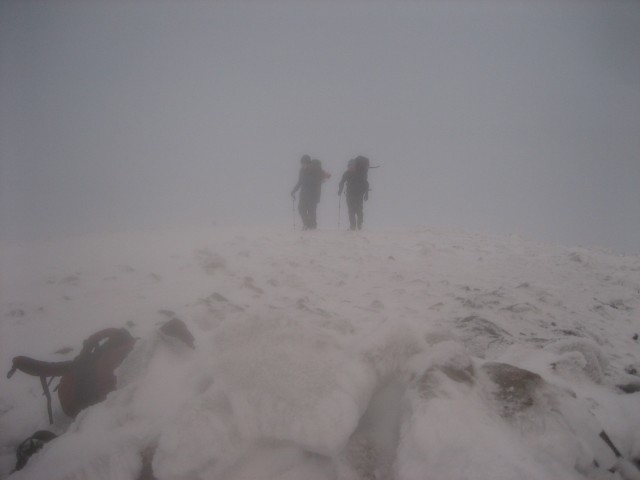 And so do Janet and Kev. 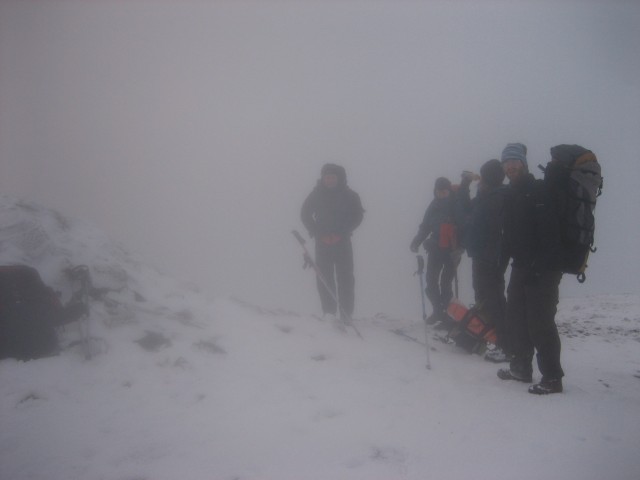 The descent of the north face of Chlamain turned out to be the biggest challenge of the day. The snow was well iced up as it had obviously been taking the full force of the freezing wind from the north and we all struggled to keep our footing on the steep slope. The visibility was also very poor and more than once I had to do a quick check on the bearing before sticking my hands back in my gloves.

The terrain eventually levelled off and it was pretty clear that we were heading in the right direction but it was still a little unnnerving how long it took the bothy to appear. I had to bite the bullet about 15 minutes short and strap the head torch on, the others soon doing the same and soon a strung out line of bright lights was moving through the darkness towards the bothy. Kev reckoned he could smell burning - someone's head torch malfunctioning perhaps? - and right enough, a window lit up by the flickering flame of a candle soon came into view across the expanse of heather and bog.

It seemed we had arrived just in time to boost John's dwindling supplies of fuel and whisky - soon we were all fed, the fire was roaring and we set about feeding all the whisky to the mice and setting the world straight. Oh, and Kev cracked some jokes and regaled us with stories of his Aberdonian upbringing. Before we knew it the mice had cleaned us out of drink and the days exertions were beginning to take their toll, so we turned in for a well earned night's sleep.

The morning revealed yet another food faux pas on my part when preparing to cook the bacon for my bacon rolls, I discovered ....... no rolls! Bollox! Muesli bars it is then....

At least I hadn't forgotten the coffee - what a disaster that would have been! Middle of nowhere on a cold Sunday morning and no caffeine!

We quickly decided that although the Tarf Water was probably crossable, it might be a Munro too far to attempt the two on the other side of the river and still head back out to the car park in the same day, especially given the lack of daylight. So it was decided that we would all head up the Tarf together before cutting away from the river and over Tom Liath to Loch Mhairc. 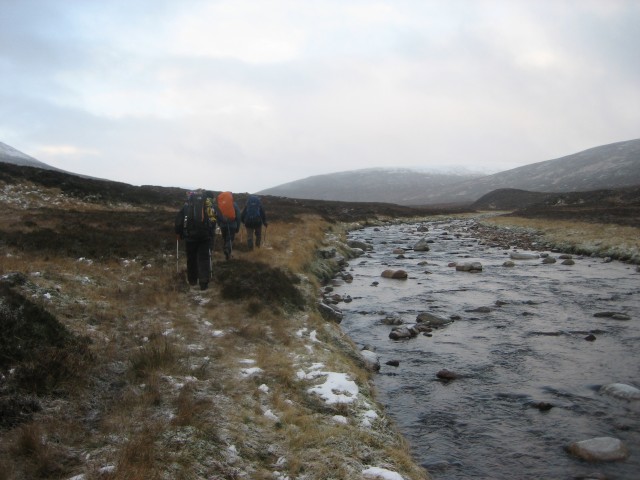 Traipsing up the Tarf 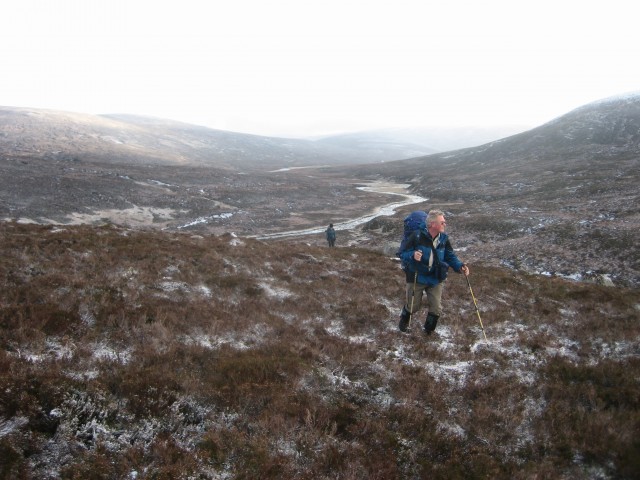 At this point the others all decided to continue on over Beinn Dearg. I had done that one the same weekend last year following a bitterly cold night in the Allt Sheicheachan bothy, so I decided to strike due south and up onto the north ridge of the Corbett Beinn Mheadhonach. 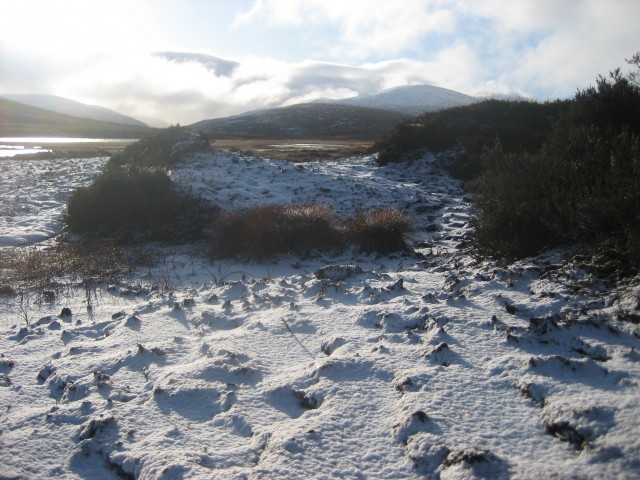 It was another long hard slog up this ridge with the wind howling stronger with every step and as I approached the plateau, the storm which had been brewing behind me finally caught up with me and hit me hard. Other than a quick couple of stops to snap some shots, I don't think I paused at all, not ven at the little summit cairn. It was probably the fiercest wind I have ever tried to stand upright in at the top of a mountain, and that is saying something. 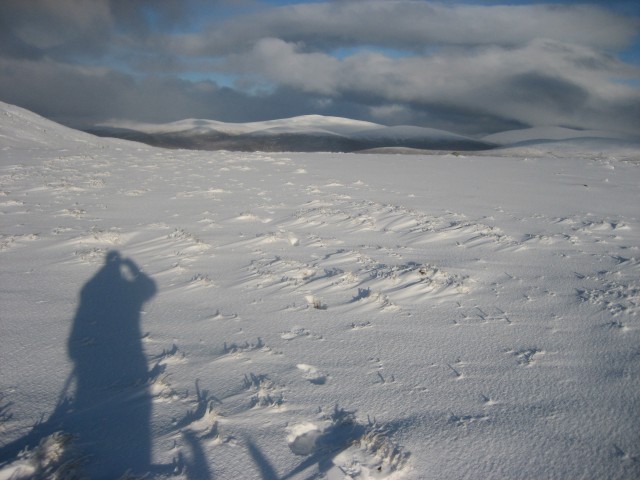 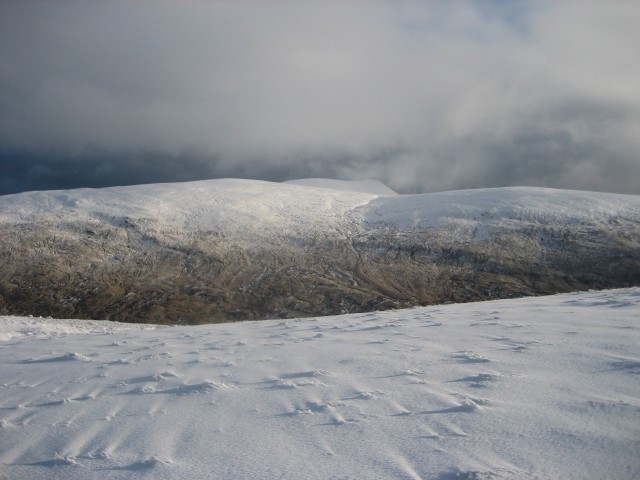 The path off the summit is wide and clear to start with but soon it suddenly runs out in a sea of heather and there was little choice but to wade knee deep through the heather towards the bridge at NN889712. I stopped here for a quick spot of lunch before continuing out through the narrow glen and back into Glen Tilt.

It was now a case of head down and fast march back along the track to the car. The other cars were still there, so I waited half an hour or so before leaving a scribbled note for CurlyWurly and heading home for a long soak in the bath.

All in all a great weekend - here's to the next one. Knoydart in the spring?

Enjoyed that report, Graeme. Can I just clarify that I am no coprophile. I merely happen to have an interest in pathogens from stools and faeces. but I do have friends who call me the 'Shitdoctor'. So perhaps the Scatmobile is more appropriate. Roll on the next meet.

I'm just back from Glen Dessarry so am catching up on reports. I'm glad that you had better weather on Beinn Mheadhonach than I'd had on the Friday. Nice to see the views that I missed

Wouldn't normally carry out a gratuitous bump such as this but in light of the ongoing efforts of Alan Ross and Jelena to document the history of the WH meets and recent discussion on the "Meeting up" thread, (and the fact that it's Friday evening and I have had a beer), thought I would take a wee walk down memory lane! Six years ago this weekend!

You all look so young and innocent there

Can't believe this only got 2 comments at the time. It was this set of reports (by you and others on the trip) that got me posting on the forums after a few months of lurking