Well, I see some of you guys don't rate Beinn na Lap, too highly, but for me I rated it a four, or even a five, perhaps more due to the conditions and musical entertainment on the train on our way home - is that allowed? I guess on another day, all the comments about a dull hill could well be true, but it was a good one at this time of year, to celebrate my 21st and Charles's 70th!

I quite liked the idea of a wee train journey across Rannoch Moor, combined with climbing a hill when first suggested by Big Jesper, a few months back, though the hill descriptions and reports didn't seem too inspiring. Between weather and other circumstance's, we hadn't got round to it, till December. The forecast was for good visibility, minus temperatures and dry conditions, so it was all systems go, despite the early start to get the train at Tyndrum, at 0758.

Maybe we miscalculated, or didn't allow for the darkness and road conditions, but it was a dash along the platform and throwing the rucksack's aboard as the train was warming up to depart, as the conductor bruskly pointed out, we were 'cutting it a bit fine!' The main thing was we had made it, otherwise, we were all for a mad dash up to Glen Orchy, to try to catch it there, but then we would have missed some of the fun on the way back!

The views of the hills and Rannoch Moor, with plenty deer browsing for food and the sun beginning to show, were just spectacular, which helped to take the edge off Big Jesper's mood, having to fork out a small fortune for the train fare's. It was also, good having a wee banter with "Andy" who shared the journey and was heading for the Corbett, Leum Uilleim.

We got off the train at Corrour and parted company with Andy, just the back of 9 o'clock. Running a bit late apparently due to some lazy latecomer's at Tyndrum! 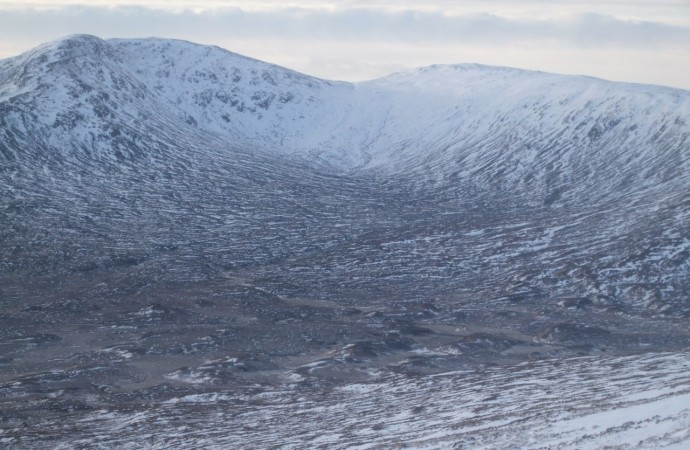 The attachment DSCF2546.JPG is no longer available 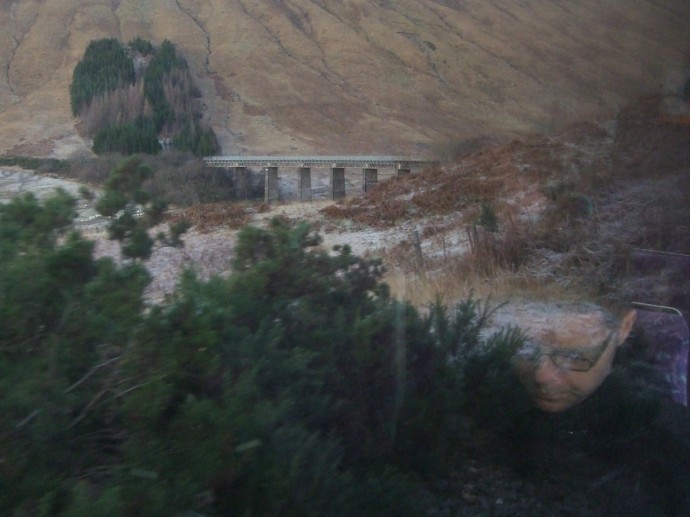 We were soon on our way along the forest track, towards the loch, eyeing up the hill with some excitement due to the extent of snow covering, clear conditions and the daylight, slowly poking through. The route is pretty straight forward and in clear visibility even I could not get lost! 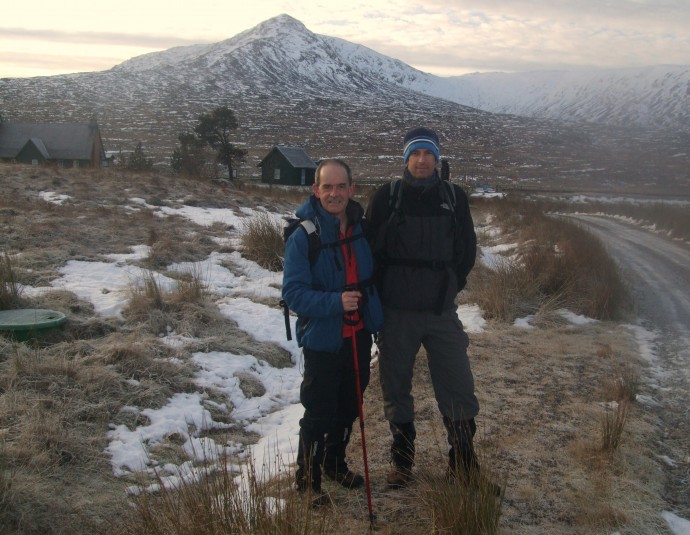 Me an' Big Jesper, my good friend Charles. 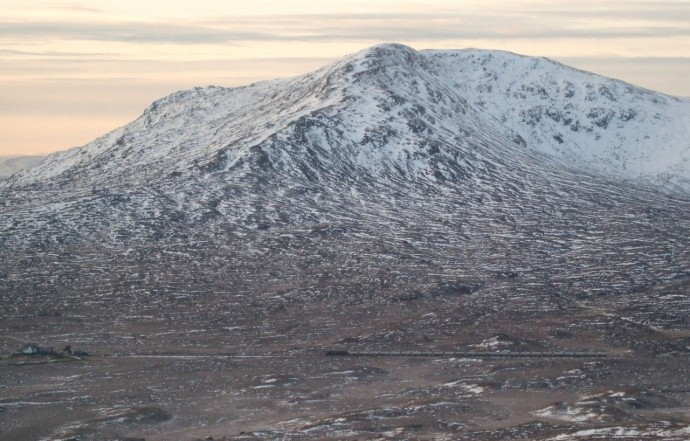 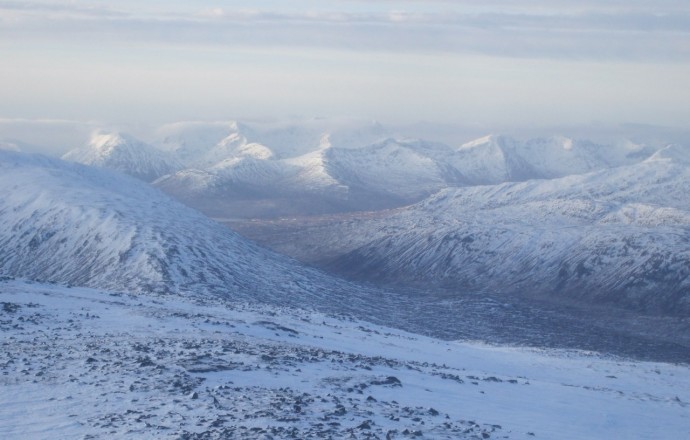 The slopes aren't too steep, but with a good 6 to 12 inches of snow and some large patches of ice underneath, made for a bit harder going, especially as we were intent on catching the return train at 1230. 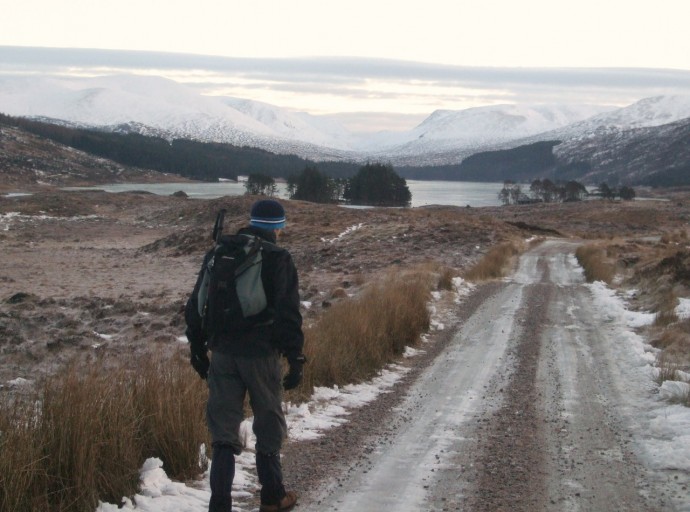 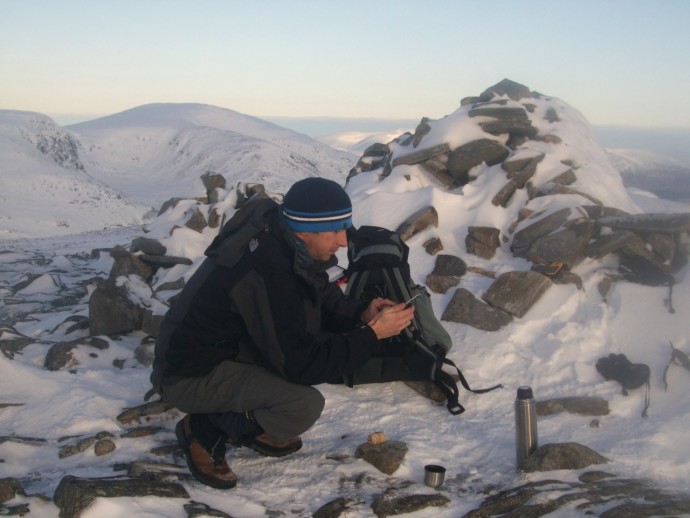 There wasn't much time to draw breath, specially for Big Jesper, who is getting a bit old and out of condition these days!! However, it was well worth the effort, as the climb is only 500 metres, or so and the views just got better and better, as we neared the ridge, whatever direction one faced. 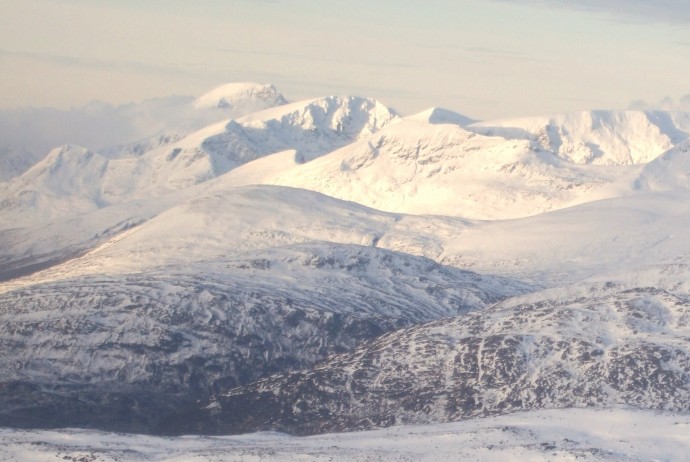 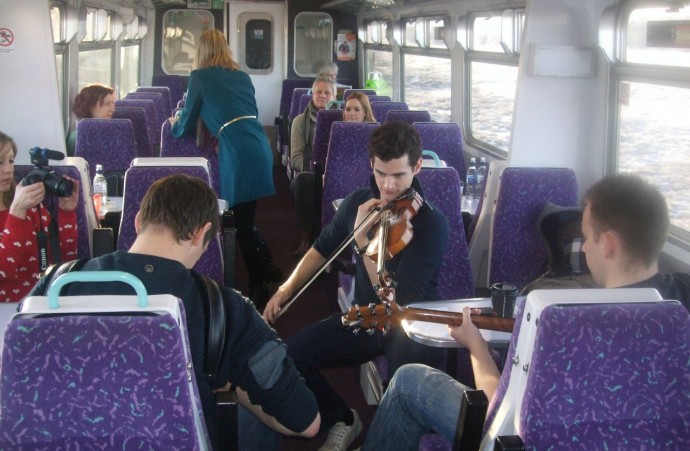 Once on the ridge, things level off substantially and it is just a matter of watching one's footing on the rocks and heading along far enough to reach the true summit cairn, which we reached in about an hour and three quarters. 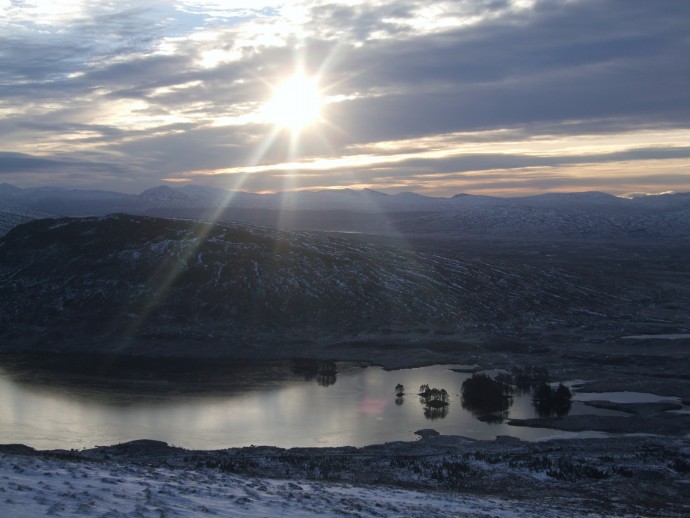 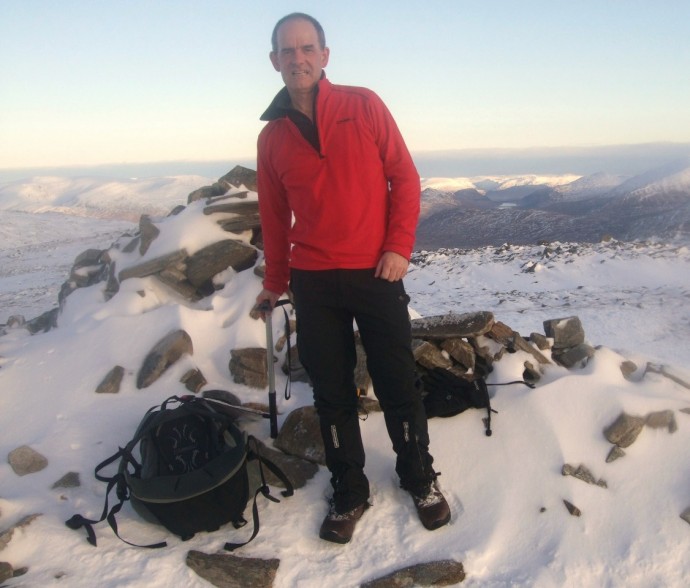 Visibility was great and we had the hill to ourselves, able to get great views of all the surrounding ranges. Alas though, we had little time to tarry, having a few photo's and a quick coffee - and one of Charlie's roll's, cause dopey forgot his!! 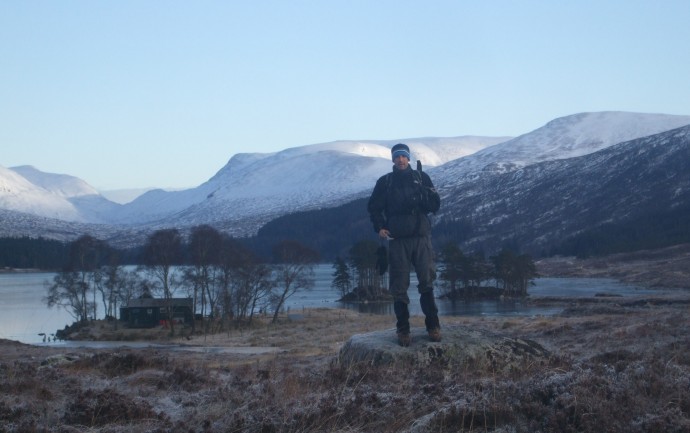 East towards Loch Ossian and the Youth Hostel. Beinn na Lap from the station.

After about twenty minutes we were back on our way. Heading down was great fun! Big Jesper, having the ice axe took the more direct, steep descent, whereas I tried to make for a similar, safer route down, taking a few shortcut's here and there. There were a few slides and tumbles, which meant a degree of caution was required, but very little risk, despite our charging down in about 40 mins. Back on the forest track, we could go at a more leisurely pace, confident we would make the train. Time for a few more photo's of Loch Ossian, a chat with some walker's heading out, before getting back to Corrour, a little under the three hours.

It wasn't long before Andy appeared heading down the track from Leum Uilleim, having had quite a rush too, sweating near us much as we were! 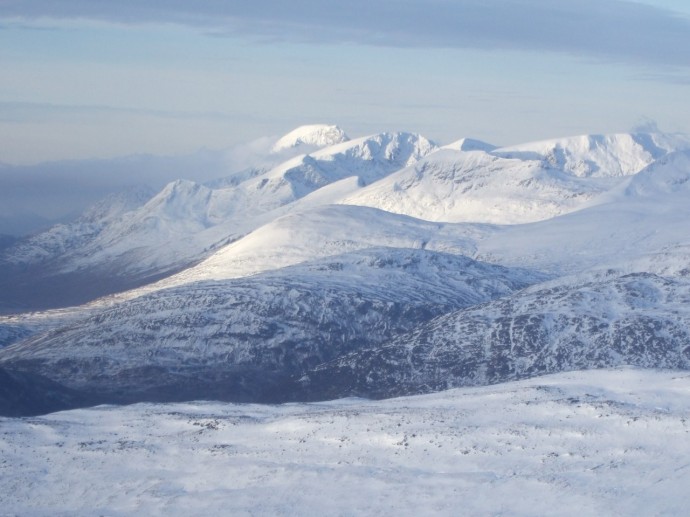 The train arrived and the conductor suggested we move forward to the front compartment, as "there may be some entertainment later - and it's warmer!" Sure enough there were many more passengers in the front - and it was warmer! A bit down the line, a group of young lads began to take out some instruments from cases and a companion explained they were "Mànran" and doing some filming of a promotional video for Celtic Connections. "Did we mind?" No, carry on lads! 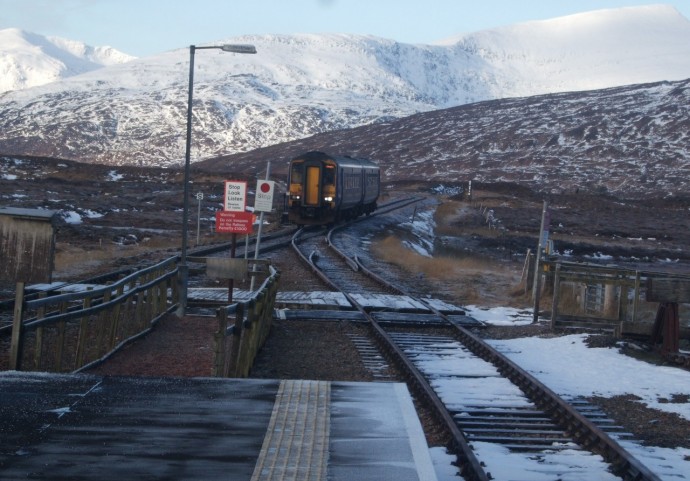 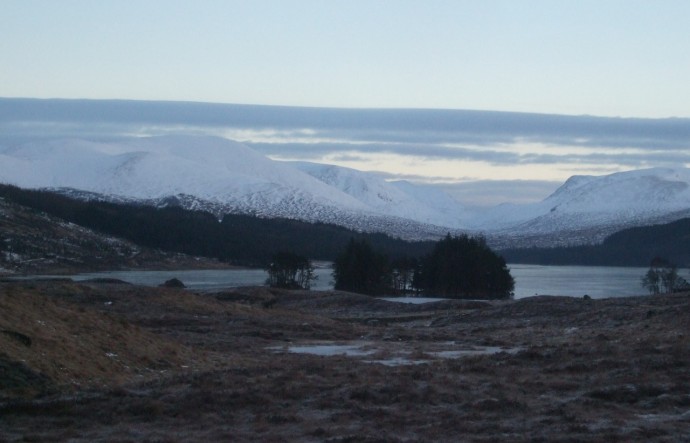 What great music, to round off a perfect day on the hill! And, nice lads to go with it, playing a great mix of Gaelic, English music, fair getting the train rocking! Big Jesper being a handy Piper himself was well into it and acquaint with connections to one of the lads and as coincidence would have it, I briefly knew the mother of the accordionist many - many, years ago, at school. The cans of lager on the waiter's trolley were looking very tempting, so it was with heavy hearts that we threw our rucksack's on our back's and departed the gig, at Tyndrum Upper. I just didn't have the nerve to phone the wife and try to explain I'd missed getting off and ended up at Queen Street ....... though, there was a day! 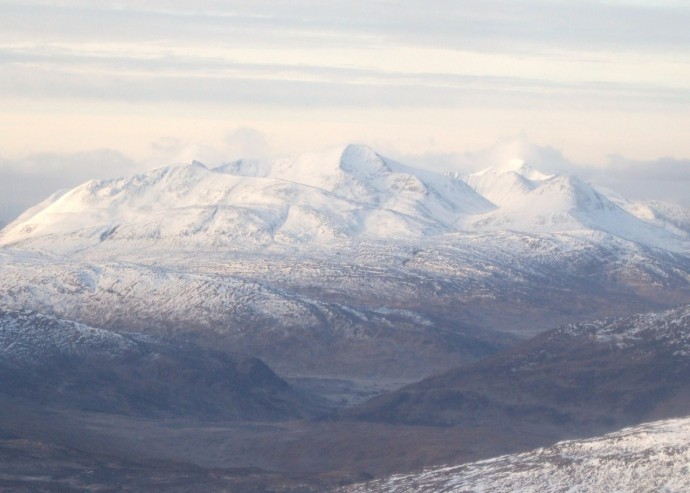 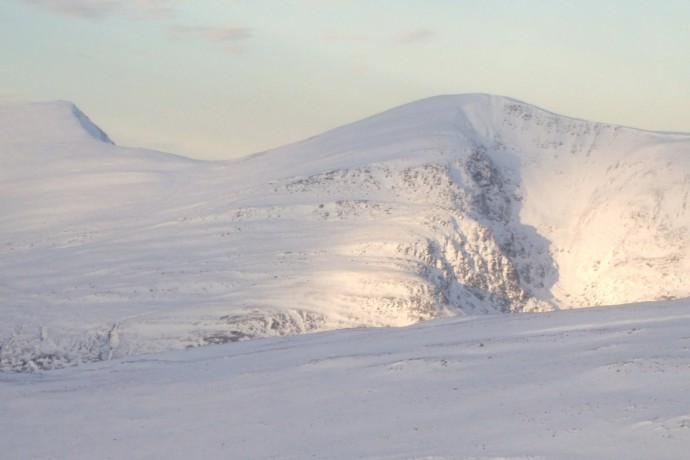 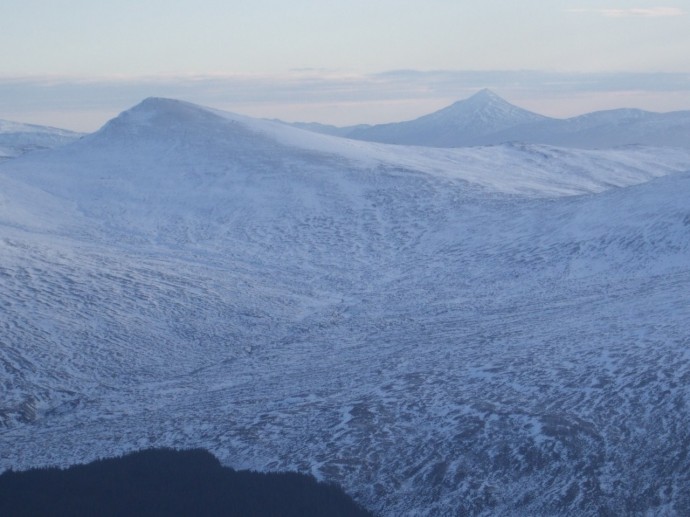 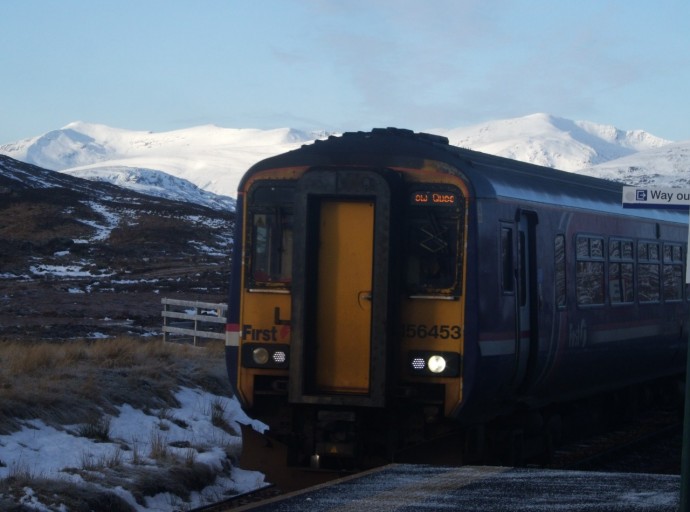 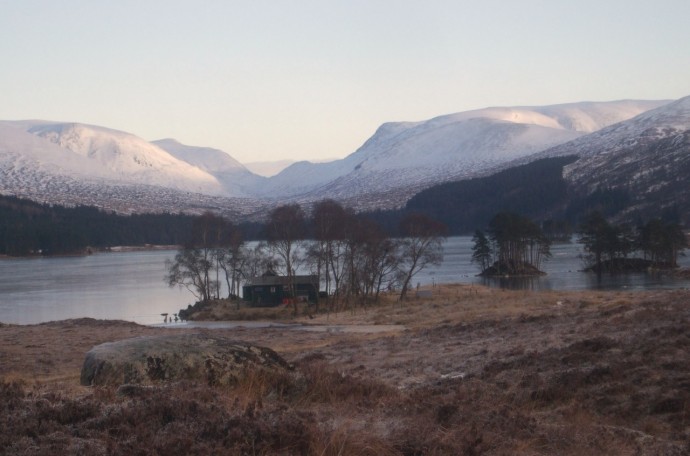 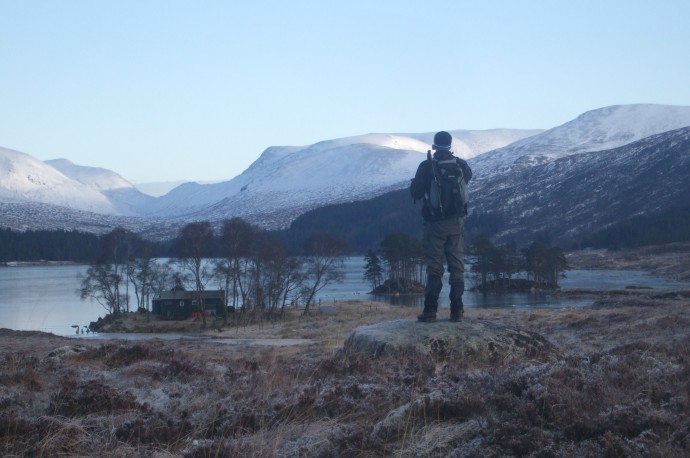 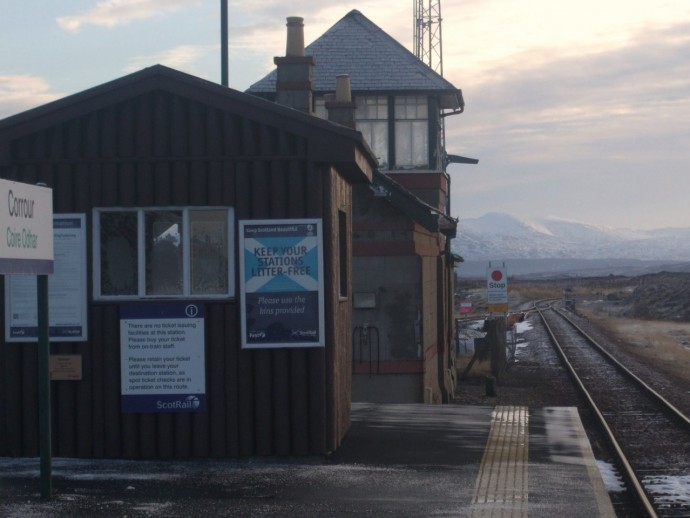 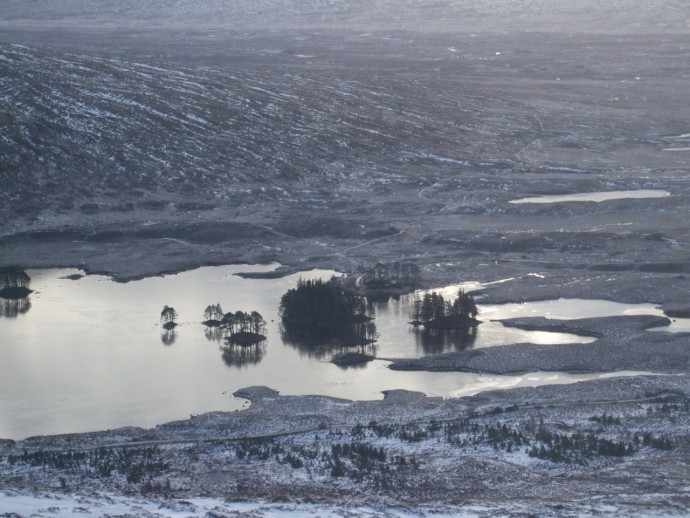 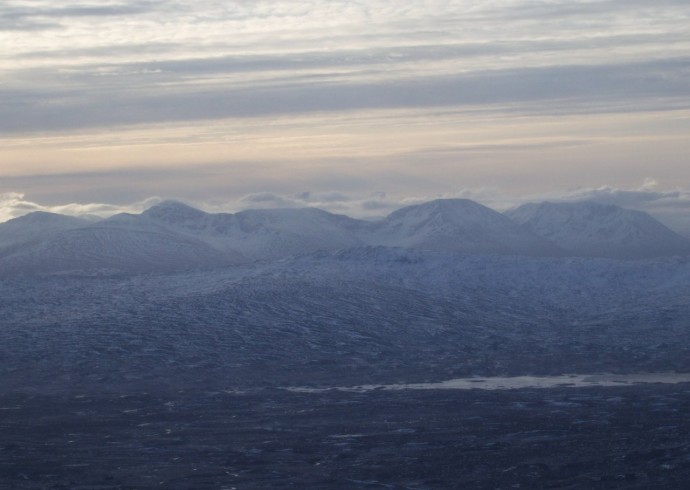 Hi JimboJim, sounds you had a good morning

. Beinn na Lap brings back fond memories of when I compleated, a fine wee hill, no doubt even better with a bit of the white stuff about

. Entertainment on the train as well, great stuff

. Must get back up there to do the corbett and visit Station House for some grub, the last time I visited I was wild camping

. Where's the photographs, did you not have time for a few?

Hi JimboJim
A very entertaining report.. i am going to keep this one for my last hill hopfully.

Never listen to folks that talk about dull days out searching for 'frigid mistresses'.

Looks like you had a full day out amongst, and getting to and from, the hills. My only visit to Beinn na Lap was from the glen spean road and over Chno Dearg before reaching Lap. Going this way I would probably never have set eyes upon the fine wee corrie east of meall garbh and Chno Dearg....a fine wee speciman.

I was also making for the Staoineag bothy and later towards the Mamores. I'm sure that your fellow passenger would have told you about the very fine Corbett of Leum Uilleim. I had a full day out for this one starting from Loch Laggan on the off road bike....another memorable day out....but are they not all great days?

Thank you all. Yes, each hill on its day has something to offer. Was our good luck to hit Beinn na Lap yesterday! (Sorry, got a bit sidetracked with photo's. Hope you like them.)

a great report and a real heart tugger

Excellent stuff and Beinn na Lap is a fine wee hill with the train journey in and out always a great experience. The loss of the 3:30pm return train in the Winter is a complete pain though

Hey there JimboJim....I here tonight we are fellow Lochgilpers from your buddie on this fine outing!

Enjoyed the report, made some good reading, maybe catch you soon!

Oh and some cracking photos as well,

Nice report. Funnily enough I have just been weighing up whether I could get this done getting off the morning train and be back down in time to catch the 12.30 as I rather fancy this hill in winter. Hanging about to catch the evening train does not sound appealing

Think I may well now give it a go. Cheers

laconic surf wrote:Nice report. Funnily enough I have just been weighing up whether I could get this done getting off the morning train and be back down in time to catch the 12.30 as I rather fancy this hill in winter. Hanging about to catch the evening train does not sound appealing

Think I may well now give it a go. Cheers

Hi Compendious Surf. Unless conditions much worse, or your not so fit, think you should be ok to do in time for return train. I'm in fifties and we made it back with half hour to spare, though we didn't dilly-dally, that's for sure.

Yep, each day out has its merits - so far! Maybe just been lucky with where and when, but look forward to next one.