After a convivial Saturday evening in A'Chuil (viewtopic.php?f=9&t=2813) everyone was up fairly early with a variety of plans. I was to cycle back to Strathan and head up the pair of Corbetts Fraoch Bheinn and Sgurr Mhurlagain. First problem was a frozen bike

I was able to get the front derailler to work (a bit) so had, at least, a couple of gears to choose from. Given the circumstances I took things easy and didn't start walking until half nine.

The track across to Kinbreak is signposted on the west side of the Dearg Allt - the 1:25000 correctly shows it climbing up to 320m then heading east to cross the stream. Where it turned east I headed off up the south ridge of Fraoch Bheinn seen on the right of this photo taken from Carn Mor a couple of days before. It gave a pleasant easy ascent of the hill. 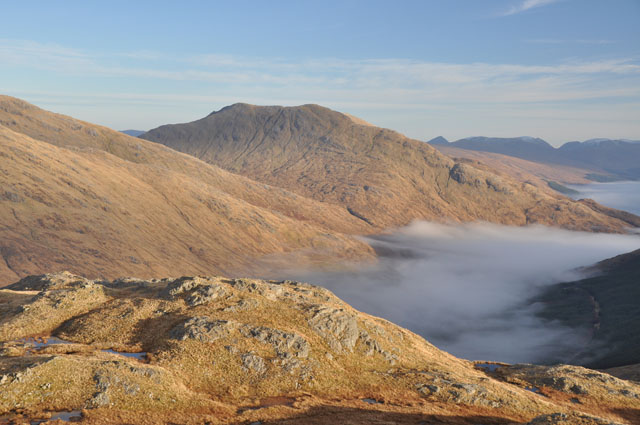 Compare that picture with the following ones taken on my way up the ridge and you'll see how the frost had taken hold during my stay. The deer in this area definitely like having their photo taken At the summit it was overcast so the views were a bit disappointing. Ladhar Bheinn was looking good however A bit of thought was needed to find a descent route to the col below Sgurr Mhurlagain. The whole east side of Fraoch Bheinn is steep and deserves respect! The nicest route would definitely involve the ridge heading north to Bidean Mhic Iain Ghlais mentioned by malky_c in his report. The direct descent east from the summit looked seriously steep and I decided to head back down the South ridge a bit and find a way down once the angle had eased off a touch. I left the ridge once I got to the level part seen left of centre in the next photo. I still had to wander back and forth a bit to find a suitable route - mainly down steep grass. I don't think MC would have appreciated the route

There are easier alternatives if you descend further down the south ridge before heading back across to the col. During the descent I'd been eyeing up the much easier slopes of Sgurr Mhurlagain and I was soon approaching this second Corbett of the day. The north side is rather wilder and it was a surprise to see the cairn nicely perched on top of a set of crags. The clouds had largely disappeared and a huge array of peaks was again visible. Another day to lie back and enjoy the view Eventually it was time to head back to the frosty world far below. Back at the col the sun was low and producing some lovely warm light. Here's the view north. Eventually the sun disappeared behind Sgurr Thuilm but by then I was almost back at the (still frozen) bike for the cycle back to A'Chuil. My companions of the previous night had kindly left some coal behind so a good fire was soon going. Just the thing to warm the bottle of claret I'd picked up from the car on the way back - I'd almost forgotten it was there!

I had the place to myself and woke about half six the following morning. I poked my head out of the door to be greeted by some very light flurries of snow and sleet descending. The fog had cleared but I could tell clouds were gathering on the peaks. I hadn't heard a forecast for a while so had to assume the worst. The possibility of a dump of snow with me stuck at the end of the last road in Scotland that would ever see a snow plough was not a pleasant prospect

I packed swiftly, gave the bothy a quick clean, and cycled out by torchlight to find that my car was the last one left at the road end. Did others know something I didn't

Excellent - you made the most of that weather window.

Some cracking photos - Loch Arkaig really held that inversion didn't it? Some great shots of that

Rather envious of you, John though not of the perishing cold I'd imagine.
I'm sure you slept well when home.

Look forward to the next report.

fantastic report over all 3 parts. I am very envious of you, esp with the good weather!

Love the "solitary" feel from the bothy pictures...

Love these photos -you have some impressive long range views in there (Ladhar Bheinn, Bheinn Sgritheall). I can't even think which gaps you would see those through, as they are quite a way away.

NE ridge of Fraoch Bheinn is certainly the way to go. I think to appreciate it fully, you need to do the whole thing from Kinbreack bothy. Never done this, but might try it sometime.

I was definitely lucky to have the time off when that spell of weather materialised! Mind you I might pay for it this weekend. We're due to head down to Cumbria to visit family tomorrow so if you hear of traffic stuck in drifts on the M74 you'll know the weather gods are getting their revenge

LOL to the frozen bike!

Loved the whole three parter, all the photos look really atmospheric with those winter browns and frozen glens. I'd still have been nursing my anger over the dog though

Yep, a frozen bike was a new one on me! I tried lighting fires just using the wood but most of it was sodden and I couldn't encourage a raging blaze out of it. With coal as well a fine fire was soon roaring away. Maybe in the Summer the wood alone would be okay.

I'm sure you'd thoroughly enjoy these hills. As you said climb Sgurr Mhurlagain before Fraoch Beinn and you could get a good look at the possibilities. Keeping far enough left after the col would allow you to miss the steepest bits.

I'm planning to do Sgurr Mhurlagain and Fraochbheinn together so I'll do it that way round - I quite like the look of that NE ridge at the far end (in someone else's report)...

You do however seem to have a recurring issue with animals whilst staying in bothies - whisky drinking mice at the Tarf bothy, a vicious dog in this one!

that is a fine set of reports John and fabulous photos...
great reading in all 3...

Hope to get some days like this in the coming winter in this area. It's a very special place.