I visited Iceland for the first time in late Agust 2012. It just so happened that there was a forecast of four days of high pressure and good weather whilst the rest of Europe lay under cloud so I almost had to go there by default if I was to do some walking abroad as I had wanted.

I had picked out two small hills (Akrafjall and Kirkjufall) and some waterfalls to visit. Akrafjall it would fit the bill for a first day's walk. It is an hour and a half drive north from Reykjavik airport and the arrival time was late afternoon. This would hopefully mean a walk in interesting evening light. I wasn't to be disappointed.

I'd read a bit about Akrafjall on the web and was aware that there were two peaks/ridges or a horseshoe of sorts. I had planned to follow the route I'd read about on the north ridge but it took a while to work out which road to follow to the foot of the hill and this led me to think that the lower, southern ridge and top would be more sensible if I was to make sure of getting to the top before sunset.

I found the lower slopes demanded a bit of concentration as the narrow path followed the steep slope of a gully and there wasn't much there to arrest a slip or fall. Unsure of what lay ahead I decided to cut off the path onto the steep north slope of the south ridge, to try to get onto the crest.

For me, the drive from Aberdeenshire to Glasgow, the four hour flight, picking up the hire car and finally arriving at the hill possibly tired me mentally and so it seemed to me at the time that this part of the walk was quite difficult. My legs felt heavy and I thought to myself what on earth am I doing here so far from home on my own. However, once I reached a point where the ridge ahead was obvious and the views were more open my doubts vanished.

I joined a path that made a diagonal across the slope I was on. I followed this onto the crest of the ridge, about turning from time to time to admire the view of the Snaefellsjokull peninsula out to the west, the twin ridge to the north and the sweep of coastline running south to Reykjavik. Once on the ridge itself it became clear why the approach route is from the west; the southern slope is very steep. Although only 555m in height, the Haihnukur top looks very impressive when seen from the lower part of the ridge. It appears as a sharp, pointed summit with a near vertical southern slope and a gentler northern slope with what I took to be skuas swooping around the cliff edge.

The rest of the route up was narrowish but never very steep and led to a delightful small grassy summit area with a trig point and what I took to be visitor's book container (I think, I forgot to look). I was there about 9.30pm having set off at about 7pm and I thought then that I'd have about two hours of usable light for my return. I lingered for half an hour, willing the sky to become more dramatic but it was a slowly changing scene. I was quite warm though and it was a pleasure just to look around and admire the view and think I am here. I'm not sure why I didn't just walk a little bit further east to see the view of the summit from there and in retrospect I thought it would have made a nice photo or video clip. Never mind, the sun setting to the west was magnificent and I enjoyed a very easy decent back along the ridge and then again along the diagonal path that I'd joined earlier.

Now, this path was going to take me further west than the point where I'd originally joined this path which meant I would be descending some steep ground at the start of the gully at the bottom of the hill. I didn't particularly want to retrace my original route though as it was quite steep so I thought I'd give the alternative a go. This proved just to be a steep scree slope with a trace of a path zig zagging down to the bottom of the hill. Not great but not too difficult. Nice! Got any more pictures perhaps?

Lovely stuff litljortindan, great views from that little beauty and the sunset on your video from the 7 minute mark to the end was beautiful. A real shame you couldn't capture the Aurora but to see it is enough

Great read, really nice to see another part of the world

rockhopper wrote:very nice - enjoyed that - hoping to have a stopover in Iceland this year but don't think I'll be allowed near the hills though

That's a shame re. Iceland hills but there are plenty of great waterfalls within a day's drive of Reykjavik. They also sell an excellent guide to Iceland's mountains at the airport bookshop. 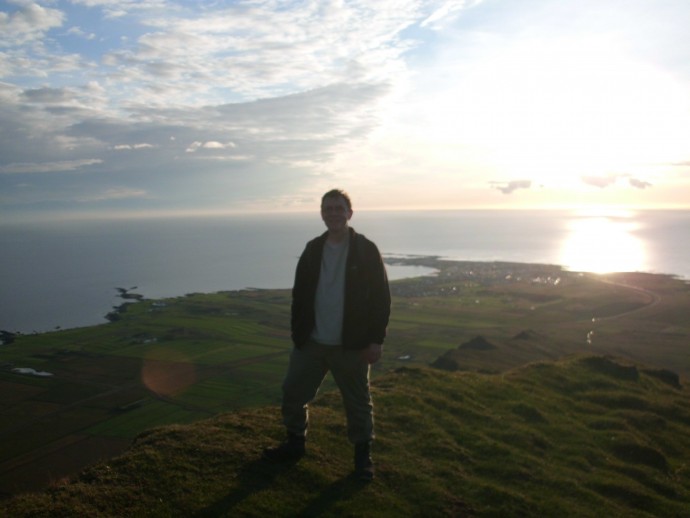 ChrisW wrote:Lovely stuff litljortindan, great views from that little beauty and the sunset on your video from the 7 minute mark to the end was beautiful. A real shame you couldn't capture the Aurora but to see it is enough

Great read, really nice to see another part of the world

It was a great sunset. Felt really lucky to get the weather over the four days I was there, albeit there was an anticyclone forecast; can go either way though I suppose, Yeah, having looked into aurora phtoography a bit since it seems I'd need a tripod and a digital SLR to stand a chance. Prefer to travel light pocketed. Definitely will return but definitely a fair weather walker too so will choose the time again...