Meall Buidhe(Glen Lyon) in the snow

Meall Buidhe(Glen Lyon) in the snow


This is my second winter Munro, having completed Ben Chonzie a few weeks back by the Glen Lednock track, and this was definitely more of a challenge, although about ten degrees warmer, so chance of a couple of snaps.

No visible track or climbers' prints to follow, low cloud meaning navigating by landmark was difficult, and snow, lots and lots of the white stuff obscuring large sections of the hillside.

OS Map and compass, plus the Bolles, deployed in earnest all the way to the summit ridge. With this much snow, and no previous climbers' tracks to follow, I'm fairly sure I "drifted"(sorry!) a few times on the ascent, but generally the slopes were manageable, enough heather and grass visible to make some kind of path possible without wading through waist deep drifts the whole way.

Lots of grouse squawking on the hillside, and the only other evidence of humanity I found on my way to the summit was a sno-cat's track just below the Meall a'Phuill ridge, as I found out later the driver had been contouring to the summit ridge!

Climbing alone, and being aware of the recent spate of avalanches, I took no chances playing about in the drifts, and made short work of the broad and steep snowfield on the final ascent up to the main ridge, the corniced edges along the whole ridge wide and white and clearly visible against the stone field of the actual top.

Just as I hit the ridge the mist/cloud withdrew a little, and I got a view down into Glas Choire, over to Garbh Mheall, and with a couple of peaks behind me nosing clear of the low cloud, and some blue sky up ahead I got a real boost to the spirits! Weirdly the cloud almost seemed to invert at a distance, then roll in again, then clear, very atmospheric!

Felt so good about it I stopped to change into drier gear then trotted over to Garbh Mheall to grab a look over to Rannoch, and of course before I made it to that summit the cloud closed in again!

On the return I tracked down over Meall a'Phuill, following the bootprints of a nice chap who was about an hour behind me on the ascent, traversed back round to Coire nam Miseach as snow began to fall, and made it back to the car in time to hear the end of the Scotland/Italy rout!

I managed a few photos on the iPhone, which will take a bit of squinting, but I hope you can get a sense of the isolated wintry atmosphere on this hill. All in all a great day out, coupled with a great drive up through lovely Glen Lyon, close ups on a herd of thirty plus deer, and beer and a dram waiting at home! Another from the summit cairn, including corned beef sarnies! 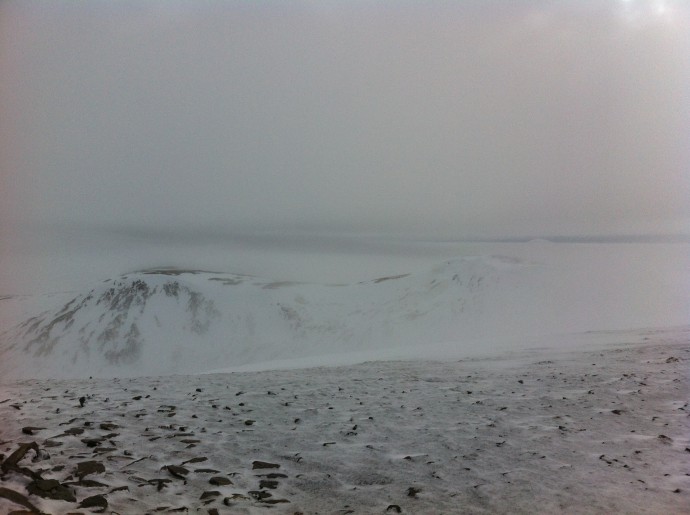 Looking back at Meall a'Phuill from near the summit cairn

Re: Meall Buidhe(Glen Lyon) in the snow

The sort of hill made to be done in winter. Looks like a nice day out despite the badly timed clag

Re: Meall Buidhe(Glen Lyon) in the snow

LeithySuburbs wrote:The sort of hill made to be done in winter. Looks like a nice day out despite the badly timed clag

It was fantastic, the weather surely made the ascent less fun, but as the cloud lifted the views of the hill and the snow were superb!