Back for another SGRidge adventure

Back for another SGRidge adventure


The plan for today: I would start at Loch Cluanie, go over the half of the South Glen Shiel Ridge that I'd missed in the summer (too knackered after starting with the Forcan Ridge on that trip

) then down to meet Scoob at Loch Quoich. He was going for Gleouraich and Spidean after dropping me off and would meet me at Alltbeithe, either by walking off this side or if he headed back to the road would instead drive up to this old lodge. I'd done all the calculations in my prep and in theory I was going for a 7-8 hr trip while Scoob had a 1hr drive then 5-6hr walk so I'd have to go flat out to have any chance of winning the bet and getting to the meeting point first

From here, time and energy permitting

we would climb Sgurr a'Mhaoraich together. 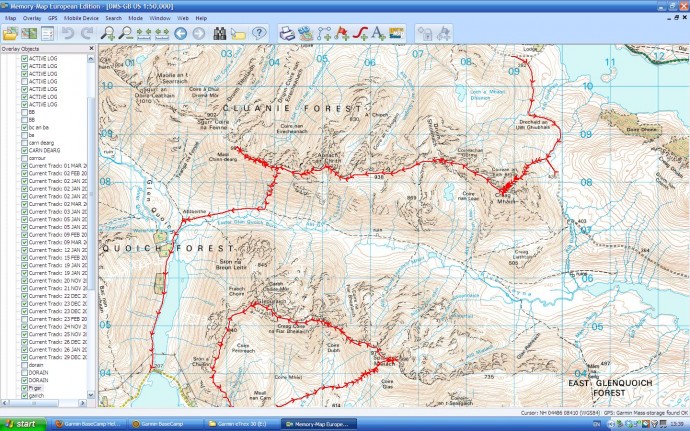 Fairly confident with my map and compass skills, today I figured I'd try using the GPS more to keep monitoring my route. First mistake... thought I'd missed my turn off to start climbing as I checked the grid ref the GPS showed against my map. So I turned back along the landrover track a short way then headed up the shoulder figuring I'd soon pick up the track I'd meant to take. By the time I remembered that the GPS actually showed the grid ref of the cursor arrow and not the arrow marking my current location (

don't find this a helpful feature!) I felt I was too far uphill to think about going back to the landrover track to pick up the path that I should have been on. So instead I took a bearing directly to the summit, seeing on the map that this missed the crags, then I followed it... straight up! 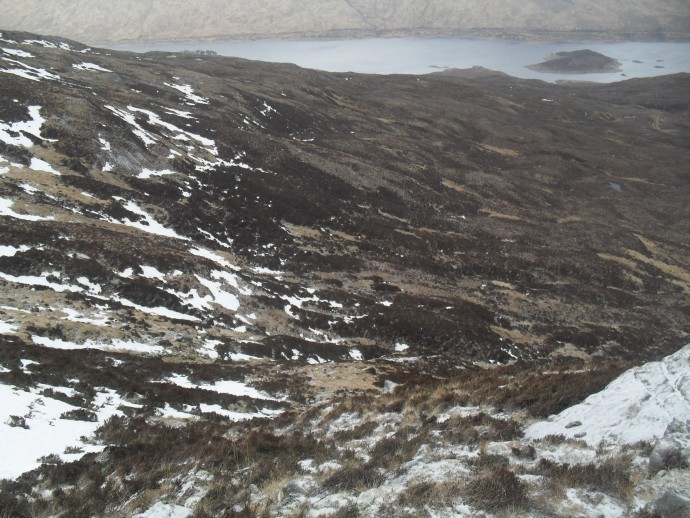 looking back to Loch Cluanie at the start of my climb 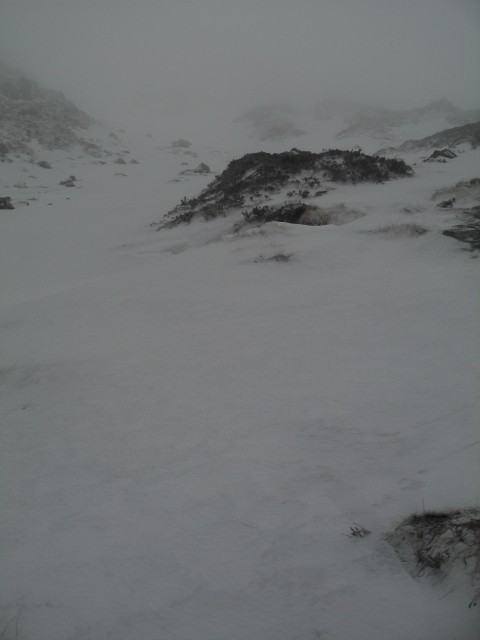 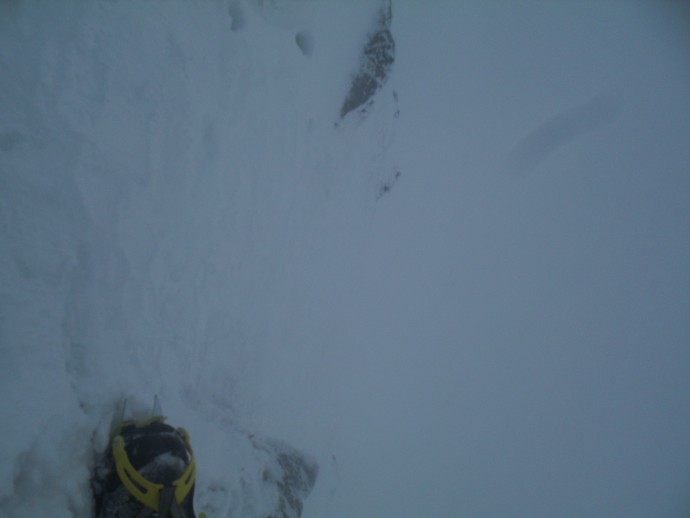 higher up, hanging on to ice axe, looking straight down at the route I'd just come up! peeking over to Creag a'Mhaim summit (took a wide berth to miss the worst of the cornice!)

and I'd made good time

From here on it was pretty straightforward, although visibility wasn't great. There were footprints all along the ridge, sometimes along the edge of the cornices.

Not long after I'd passed the third summit the clouds blew over (meaning the winds picked up!) and the views opened up more. 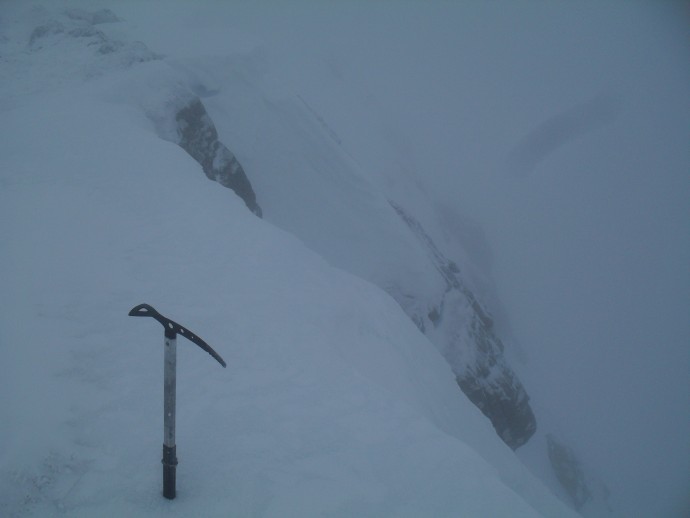 heading over the ridge 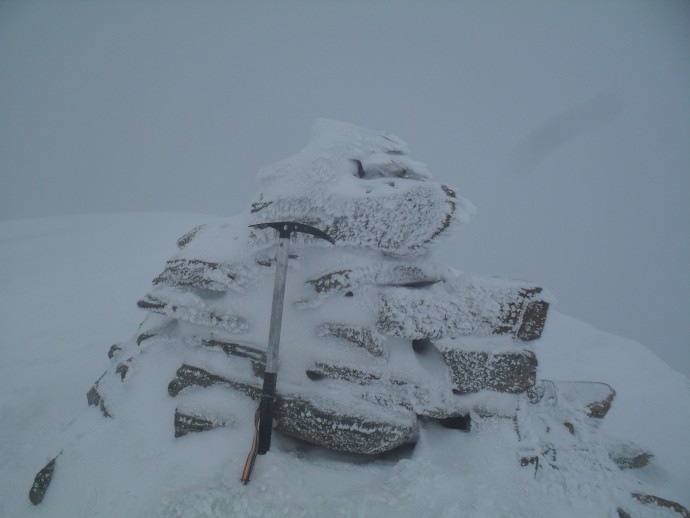 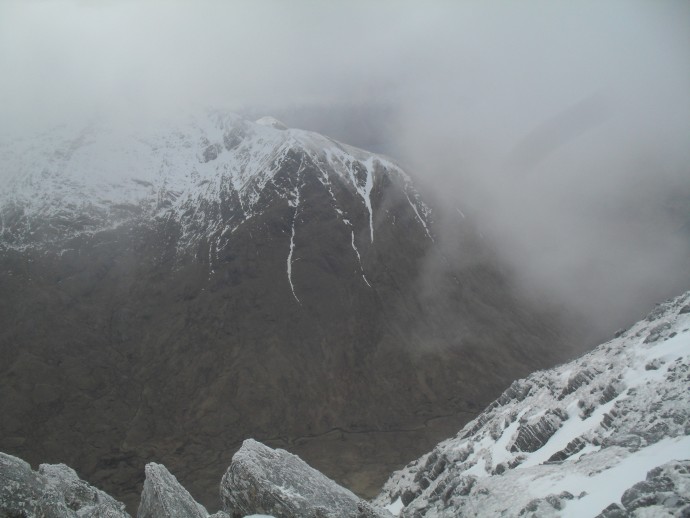 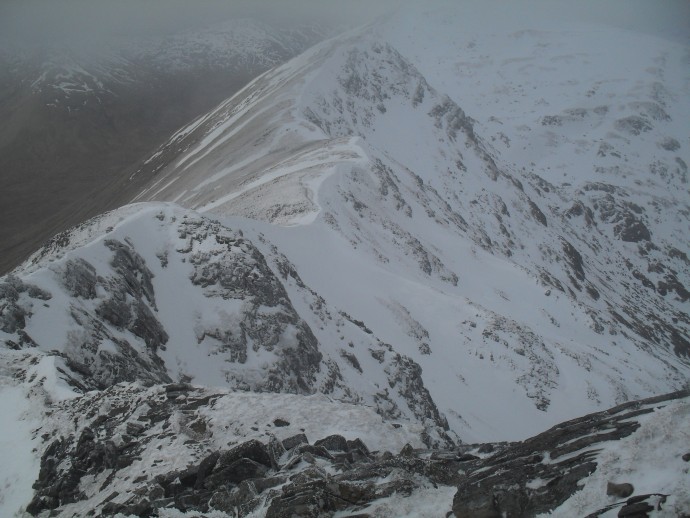 view along the ridge, heading for Maol chinn-dearg 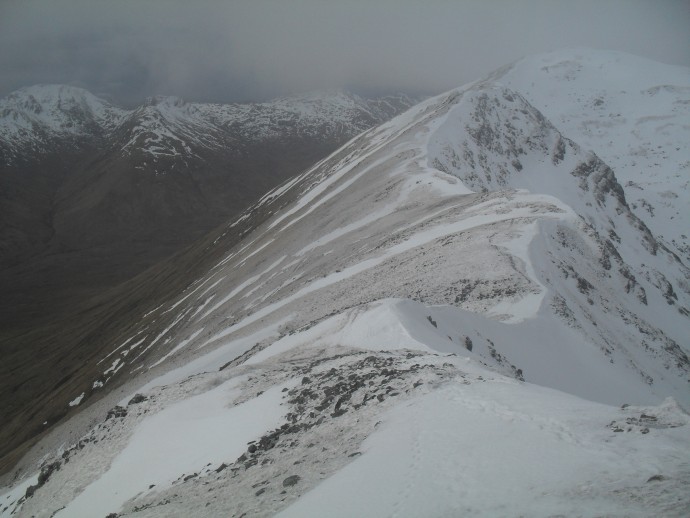 almost up Maol chinn-dearg, with Sgurr a'Mhaoraich in the background 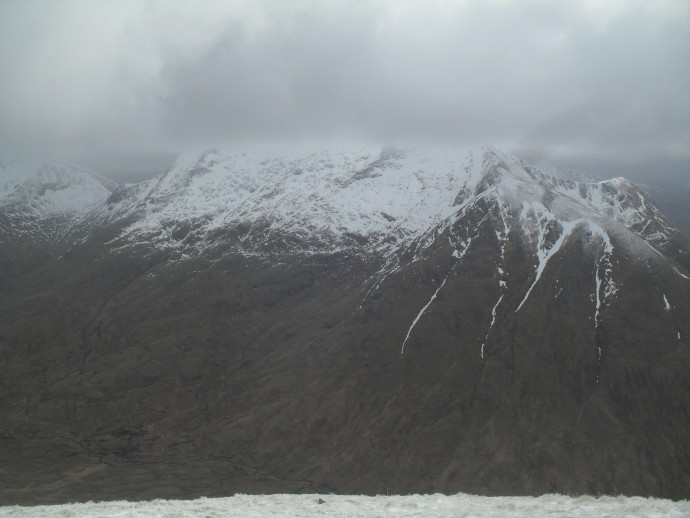 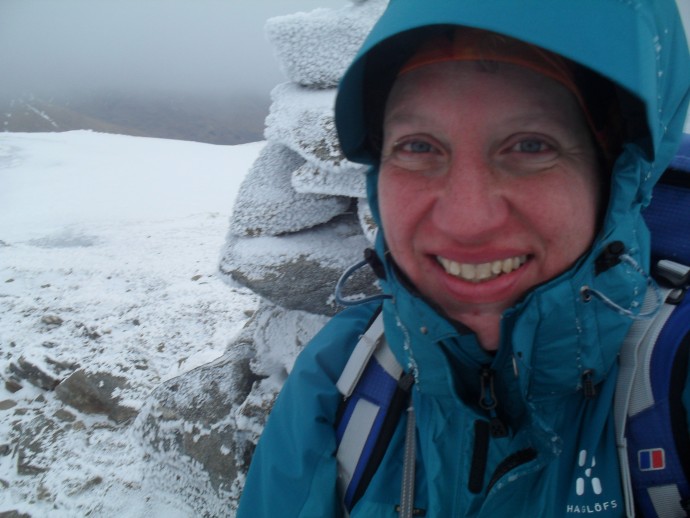 Maol chinn-dearg summit cairn didn't give much shelter from the wind!

I didn't hang about long as it was getting a bit wild by now (with bruised shins to show for it!

) So I retraced my steps back to the zigzag exit path, cutting out some of the corners in favour of a direct descent, and soon made it down in to the glen. While I had been keeping an eye on the hills across the glen I hadn't spotted another sole all day on any hill. Aware I was ahead of my own schedule though I made for a brisk walk back to Alltbeithe... and claimed a victory as no one was there! 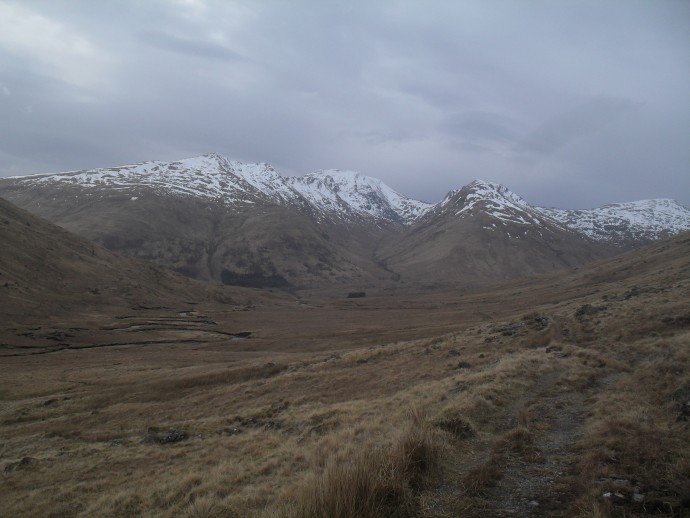 back down in the glen 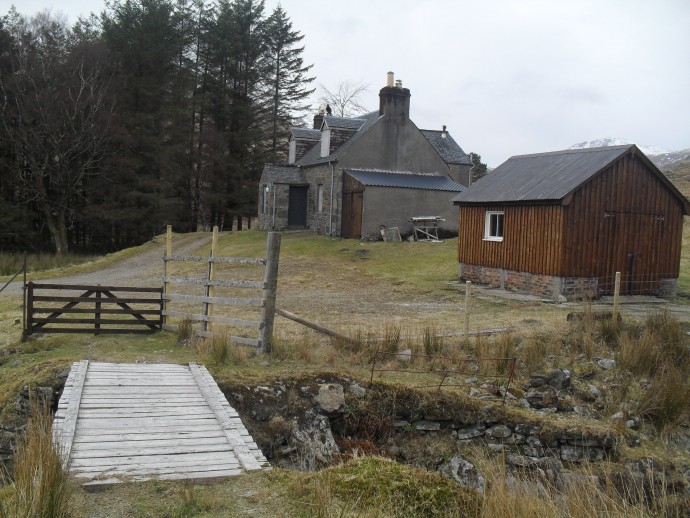 Still no Scoob in sight

I headed back along towards the bridge over Loch Quioch. This track crossed a fragile bridge that might not have taken the weight of a car

so it was just as well that there was a locked gate over the start of this track, which had stopped Scoob from driving up. 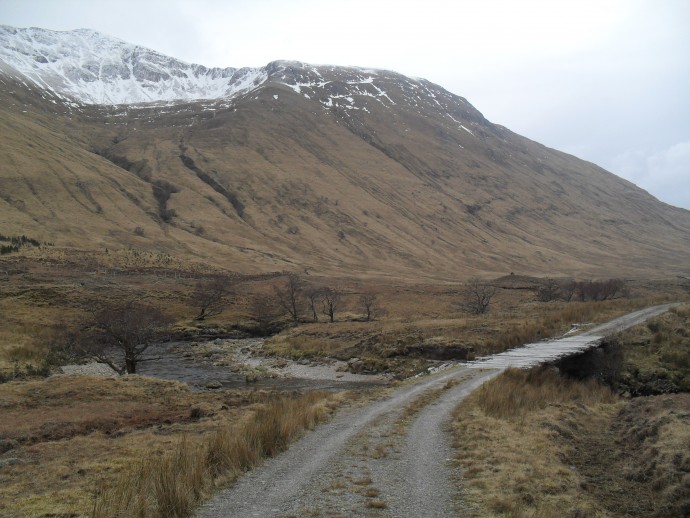 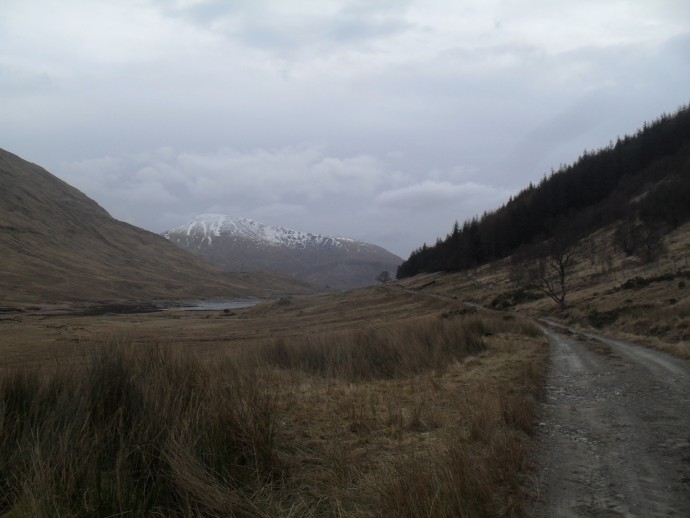 view to Gairich; first glimpse of Scoob on the path under the tree in the distance :)

Lovely report fi, not the best of weather by the look of it but you're still smiling at the top - that's what matters. That thing with the GPS reading is a bit dodgy.....I bet you don't forget it ever again though

Some great moody shots along the ridge

Loved your report and photos

Forget the gps......stick to a compass and map

It was a huge relief to see that you'd made it down safely. So i could've had another half an hour having something to eat in the car

Was a great day x

ChrisW wrote:...That thing with the GPS reading is a bit dodgy...

My old GPS was a bit more basic so only showed current position - probably added to confusion but I should have been more on the ball! Thanks for the kind words Chris

must remember to check the other forum and keep up with your wonderful walks!

Good tip Susie, and thanks! Will still try to get better with the gadgets though, thinking it can only help to add to my repertoire

scoob999 wrote:...only because i wasted to much time trying to spot you...

No need for all the worry!

Hi Fiona nothing is straightforward for you....straight up again

and when i heard about this race my money was always on you.

Sounds like a real competitive edge is creeping in with you two these days!

Graeme D wrote:Sounds like a real competitive edge is creeping in with you two these days!

Really, we're on target to compleat together

Quite a mission there Fi, well done!

(we've walked round the track a bit further on both occasions we've accessed the South Ridge and used the well trodden path up! Your bearing straight for the summit must have been a bit tougher, but obviously worked well for you in terms of time.)

Well done you! The conditions looked rather bad! Some great dramatic stots

great report Fi ,but since scoobs a LOT older than you ,it might be fairer if you gave him a start

ceaser wrote:great report Fi ,but since scoobs a LOT older than you ,it might be fairer if you gave him a start

Haha I'm almost at an age where i agree with you

But no head starts needed yet

Bod wrote:...Your bearing straight for the summit must have been a bit tougher, but obviously worked well for you in terms of time.)

Thanks Bod! Yes, was very pleased with the time - very welcome surprise when I was breathing a big sigh of relief at the first summit

Mountainlove wrote:Well done you! The conditions looked rather bad! Some great dramatic stots

Thanks ML - glad I got some views in the end though

Thanks Alice - it was a good day out really

ceaser wrote:...since scoobs a LOT older than you ,it might be fairer if you gave him a start