New_Route.gpx Open full screen  NB: Walkhighlands is not responsible for the accuracy of gpx files in users posts
A return to the Cumbrian Fells after a week away in the Peak District and we woke up this morning to a very grey, wet outlook with a forecast claiming it might possibly improve throughout the day.
Damson & I picked up John and we headed through Ulverston, Torver and Coniston down to the Langdale Valley passing the Old Dungeon Ghyll and parking further up the road as it starts to ascend towards Blea Tarn. Even donning our gear, it was clear that conditions may be difficult as none of the surrounding fells were showing their tops due to a large bank of rain cloud sat low in the valley. 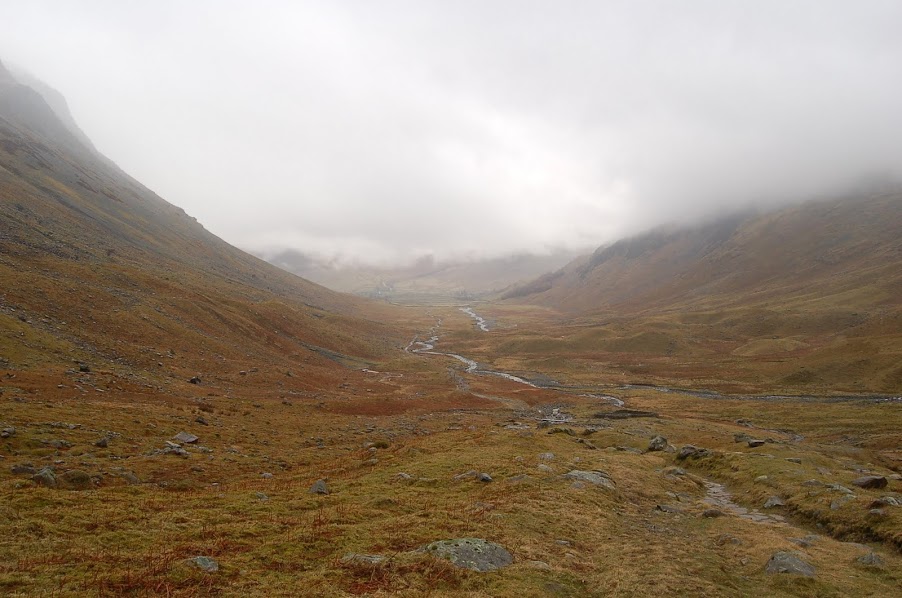 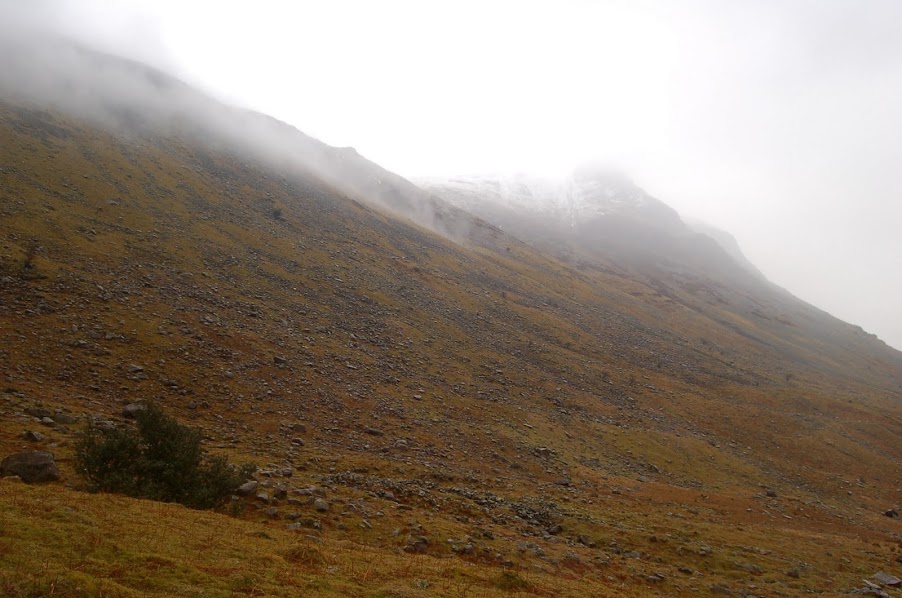 Cloud covering the fell tops of the Langdale Pikes from Mickelden

We headed up Mickelden Beck to the bridge junction and proceeded right up Stake Gill to the Black Crags.
Up till this point the weather had been "generous" and the going was good and even the climb was completed without too much puffing. 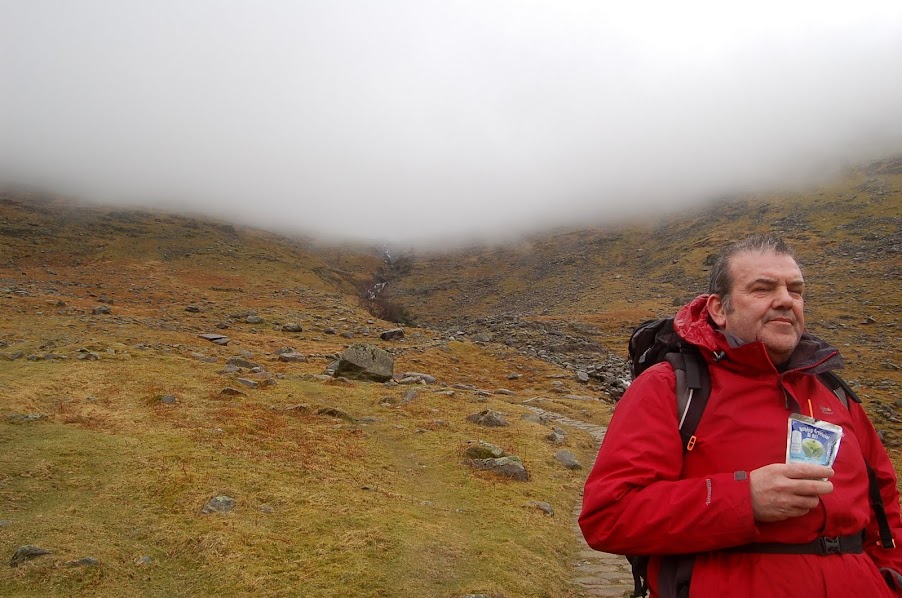 At the col we met the cloud and perhaps surprisingly a serious fall of snow (certainly we didn't expect the volume) leaving no trace of the path over the crags to Rossett Pike.
With visibility decreasing with every step and no path to follow we were entirely dependant on my GPS which fortunately was totally powered up and performing well. 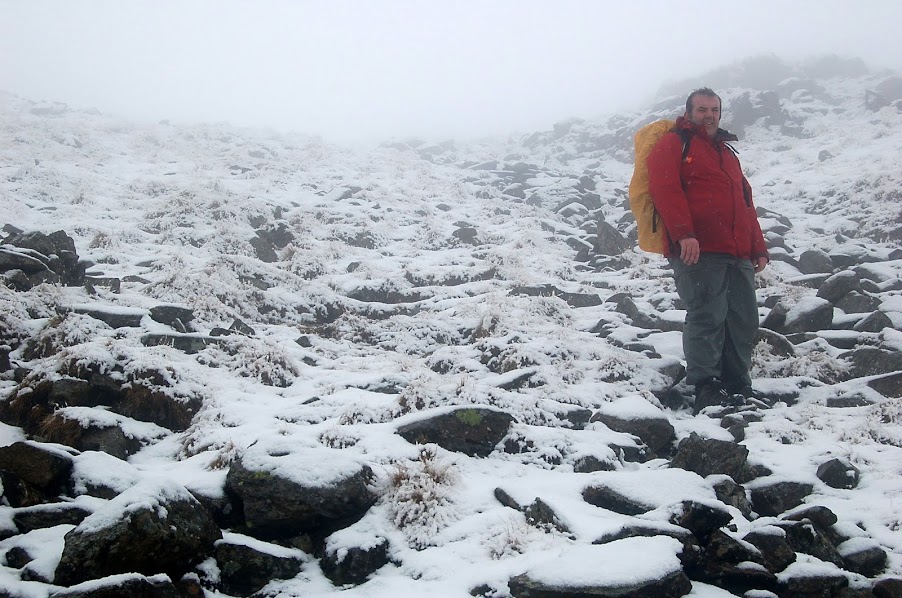 Heading into the snow and mist

Going was very difficult with snow in excess of 15" nearly everywhere and deeper drifts in some areas. Worst of all were the boggy / wet areas into which we sank through the covering snow on many occasions.
We tried to follow the pre-loaded track as much as possible staying away from the crag head and the cliffs falling back down into Mickelden yet without a track to follow and the ground very slippery underfoot, progress was slow. The cloud / mist added to the difficulty by limiting visibility down to a few feet and without the GPS we would have been in big trouble.
John was completely disorientated and asked if we were going round in circles.
The higher we climbed the thicker the snow got and eventually covered all the rocks leaving visibility down to 10 - 15 ft and absolutely everything white. The ground, the sky and no horizon !!

The GPS finally got us there and a very bleached photo of Damson was captured at the summit. This is the first fell where she refused to stay still at the top for her photo due to it being so cold and deep (despite her JOSEPH coat). 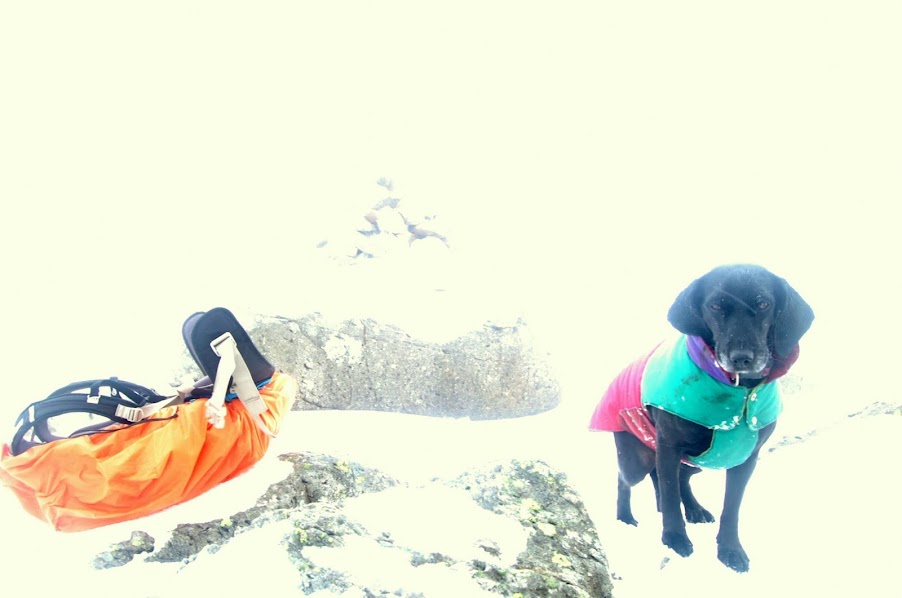 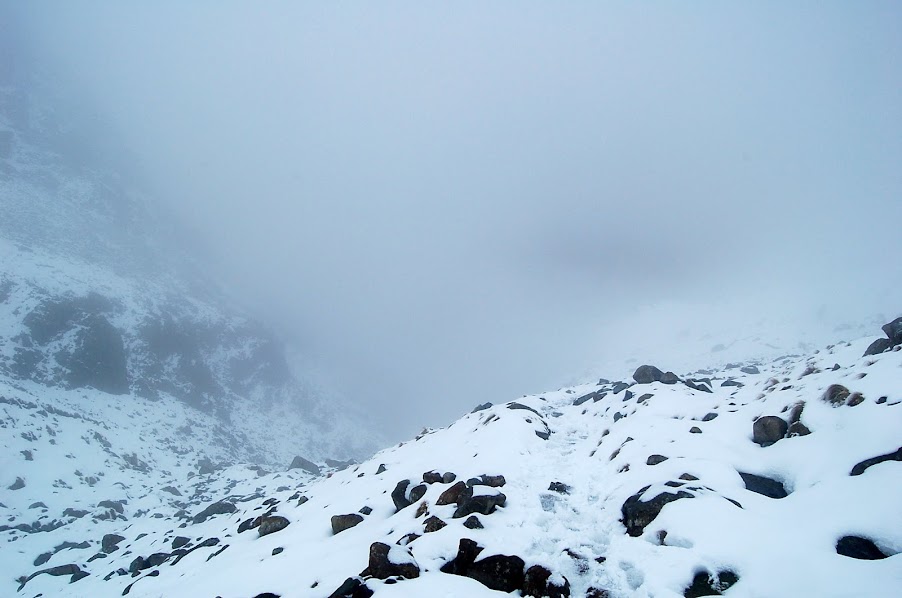 The next 20 minutes didn't improve as we made our way across to the path which links up with Esk Hause and Angle Tarn, as the white-out persisted. As we neared the path however we heard a group of 3 coming up the path and both John and I shouted out our relief at rejoining civilisation.

After a quick chat we bade farewell and started to make our way down a very snowy path until we broke back out of the cloud and conditions gradually improved. 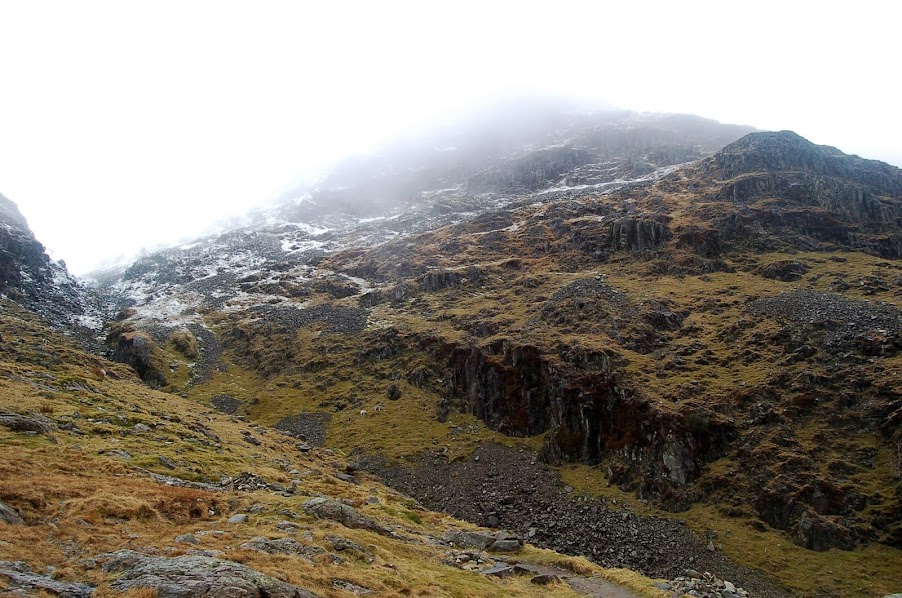 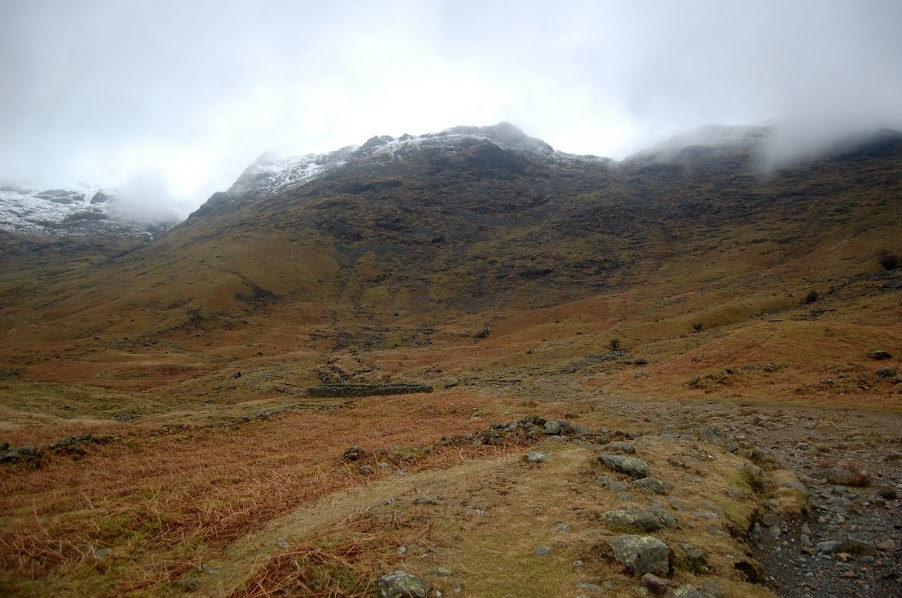 Loads of people on the Esk Hause path with plans on Scafell Pike will have thought better of it after climbing into that and a number of them said they'd get to Angle Tarn and probably turn round.

The afternoon was topped off with some geocashing in Little Langdale and Cathedral Quarry Cave and one called Slateosaurus. The drizzle didn't dampen our spirits too much although this yomp will be remembered as quite an adventure with NO decent views. We'll have to return in summer to get those !!

Shame about the fog. Otherwise there are some nice views there!
Rossett Pike with the snow near its peak looks fantastic. Wish I was there.

Damson looks very fetching in his little coat. Bless him.

That's a surprising squirt of snow on the top Phooooey, I see Damson was none too impressed with it

That was a bit of a hairy walk, Craig