A Breezy Beardy Bimble.on 3 at Drumochter

A Breezy Beardy Bimble.on 3 at Drumochter


Taking advantage of my usual Tuesday off, I thought I'd join Morecambe Monkey for another jaunt to the hilss, having already joined him along with Gavin99, Bod, Val and Richie up Carn Dearg the Sunday before.

Gael-charn and A'Marconaich were decided on as targets, with Beinn Udlamain squeezed in the middle if time, will and conditions allowed.

Afforded a leisurely start thanks to the lengthening days, I picked up MM in Moulin just before 9:30 and we were suited, booted and on our way just after 10am. Feeling warmer than a couple of days before at this point but my camera said otherwise. Really doesn't seem to like the cold!
Made our way up to the snowline and round on to the shoulder of Gael-charn. Plenty snow underfoot. Some of it nice and soft, some of it unpleasantly slippy ice patches to be crossed carefully.
A snack stop in a sheltered spot before we headed up to the first summit of the day. Some grand views over Ben Alder way. 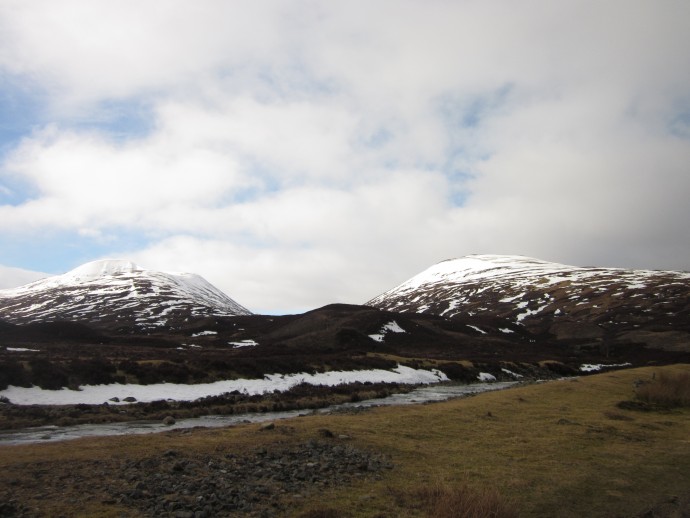 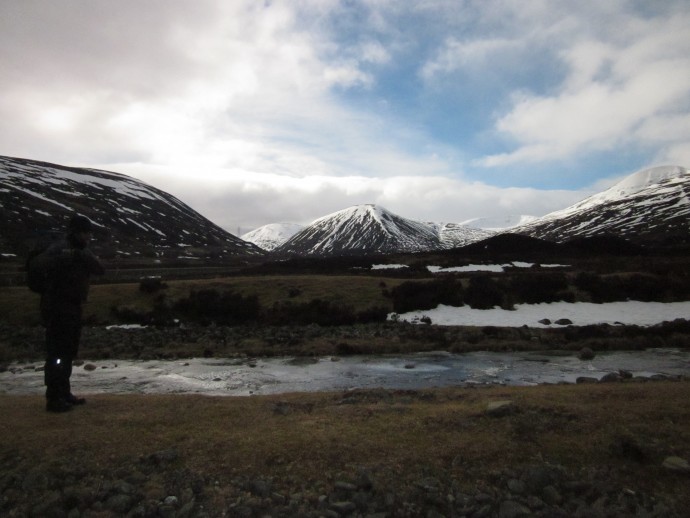 MM survey's the day ahead Back down the A9 Onwards up to summit 1. 2 cairns in sight, Ummed and awwed over which was the main summit. Meanwhile the weather decided to close in and it was whiteout number 1. Crivvens! Paid a visit to both cairns and thankfully the snow cloud moved on. Onward towards the next target with clearer views and a sense of relief. Last stop of the day, A'Mharconaich

Cut across the shoulder up to the bealach between Beinn Udlamain and A'Mharconaidh to cut out some distance. Icy in parts but some older footsteps gave an easyish path to retread.
Decision time: just do two or slot in the third. It was 3pm, we were both feeling fresh and with not a great deal of extra distance or ascent for Beinn Udlamain we dcided to go for it, views or no views. It was looking bleak for the ascent to number 2. Looking back over MM and to Gael-charn There's a handy line of fenceposts that lead up from the bealach to almost the summit. Very handy in the poor visibility. Some impressive build-up of rime to be seen on them. Soon enough Beinn Udlamain summit reached, and a fair bit of clarity for it. The one bonus up to this point was that we'd had the wind at our backs, for the rest of the route we'd be either facing into it or side on. 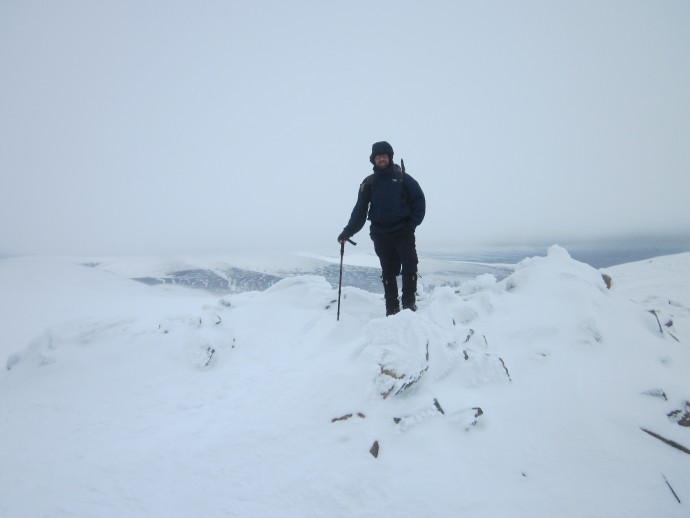 Summit 2 of 3 done. Time to make for A'Mharconaich and the car. Largely good solid snow and for the moment the cloud level was staying high enough. A swift descent down and then a fairly gentle trek up towards summit number 3. 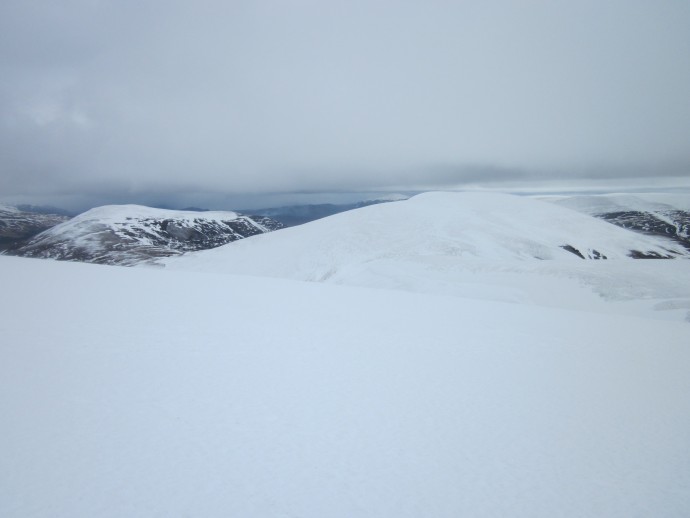 Surrounded by more cloud, snow and still beinig bettered by the wind it was good to reach A'Mhairconaich's rather unnasuming summit. Number 69 for Morecambe Monkey and number 60 for me. All that remained now was to get down over what was to to be the steepest part of the day and back to the car. The steep section's fairly short and over before you know it. I'd pondered doing this circuit anti-clockwise if this looked like it would be trouble to come down, but it was fine. Largely good underfoot with some patches of slippy ice to cross but it was quick going and soon down back below the snowline. Things were clearing up as the sun headed towards the horizon but it'd snowing again by the time we got back to the car to de-boot. The car's down there somewhere Well wrapped up for the chilly descent. Almost home and ready to hop ever the level crossing to the car park. One last look at the day's fun as the snow fell again. Back to ground level. Day done, it was off to Moulin for a pint, grub then home. 4 Munros in a week was good going for me, Morecambe Monkey wasn't quite done with the hills for the week yet.

Looks like a grand day. I have the occasional Tuesday of. i'll pm you if i'm heading out

It was great to get out with you Nathan,had a really good day. The photo's sum up the conditions perfectly,i especially like the last one with the flash reflecting off the falling snow. Love the title too.

See thee in Torridon in a few weeks time.

I was up there today on Geal Charn &'A'Marconaich and couldn't see a thing. It's good to see what I missed

Most of my day was spent in stuff like this with it being worse approaching the summit of A'Marconaich:

Fudgie wrote:I was up there today on Geal Charn &'A'Marconaich and couldn't see a thing. It's good to see what I missed

Most of my day was spent in stuff like this with it being worse approaching the summit of A'Marconaich:

Definitely no views to be had there! Fine fun to be had up Drumochter, definitely not at wetter tmes of the year though from what I've seen!

Nice one you guys, well done getting out again so quickly. Looking forward to seeing a Carn Dearg report too(hint hint MM)

Bod wrote:Nice one you guys, well done getting out again so quickly. Looking forward to seeing a Carn Dearg report too(hint hint MM)

I'll try & get a report done for Carn Dearg one evening this week.

I'm rather gutted I'm getting into the snowy strolls just as spring arrives. Still I've had. Looking forward to the Carn Dearg report.

Some great shots of a fine day in the hills Nathan, love the flash shot of the snow falling at the end there, accidental or not it turned out nicely