So, as the people deciding to stay indoors as wind batters the country and Dumfries and Galloway is buried under an unseasonably large dump of snow I thought I’d finally catch up on my reports with my report from the weekend previous.

Plan A had been an introduction to Glen Affric and the duo of Tom a’Choinnich and Toll Creagach. But the Met office suggested it didn’t look great, so plan A soon got shelved.

Plan B was Sgurr a’Mhaoraich. Weather looked ok and the bonus was I could afford a slightly later start time. So it was 5 a.m. that I was off and on my way up the A82, stopping off at Fort Bill for a tasty Donkey and egg McMuffin meal from a well-known fast food outlet

All was well as I headed further north, although passing through Invergarry I was noticing a bit more snow at a lower level than I had expected. Plan B came to an abrupt end as I turned into the minor road down to Kinlochhourn

So that led me to plan C. At that point though I didn’t actually have a plan C

With no easily accessible un-bagged Munros nearby I was contemplating what else I could aim for. And along came the Corbett of Garbh Bheinn on the outskirts of Kinlochleven to my rescue

I’d often considered this hill, but never got round to it. Now was the perfect opportunity. And so I found myself heading back south and eventually parking up at one of the small parking areas close to the start of the walk. A later start than I had planned for plan B, but as this is only a short walk all would be good.

Personally I like to investigate a walk in advance of doing it. I like to feel like I already know the hill and the surrounding area before I arrive. It leaves me feeling uneasy if I’m contemplating a walk I either don’t know already or haven’t investigated. I was a bit rusty on Garbh Bheinn, so was onto walkhighlands to get the low down on the hill and the route I would be taking (I had also stopped to purchase a map of the area too, even though it is in essence a straight up and down type of hill). Torran nan Crann at the start of the walk

Perhaps it was the lack of preparation, but I wasn’t overflowing with enthusiasm at the start. For pretty much the whole of the walk up I would be looking for any excuse to head back to the car. Despite that fact though (and the occasions when I stopped to navel gaze and try to dream up excuses) I kept putting left in front of right, in front of left, in front of right………….heading onwards and upwards

Had a couple of snow showers, but they never lasted too long.

And this little hill gives great views too………….of the Pap, down the length of Loch Leven to Ballachulish and beyond Early view down Loch Leven on the way up View down Loch Leven again.....I'll not apologise for including this view more than twice in this report One of the snow showers

The initial section of the walk was pretty boggy, but eventually I was standing at the base of the serious climb up Stob Coire Sgoilte. I tried to persuade myself to jack it in here, but the feet kept moving onwards and upwards The majestic Pap of Glencoe

First set of crags. Did that with no problem.

Then the short trip to the next set of crags.

Then the 300 odd feet to the top of Stob Coire Sgoilte.

A bit of a slog, but done in no time.

All that was left was a short scrambly bit and a final 300 odd foot walk to the summit opf Garbh Bheinn.

This led to another temptation to quit, but it soon passed (the snow and the temptation) and I was finding a way round the crags in some nice deep, steep snow. And there I was on the final slog to the top

And here I could enjoy the views Blackwater reservoir and the wasteland of Rannoch Moor (well, some of them Stob Ban of the Mamores

The Pap and down Loch Leven to the west

Oh yeah, and the cloud even lifted off the Aonach Eagach to give some wonderful, snowy views of the notched ridge 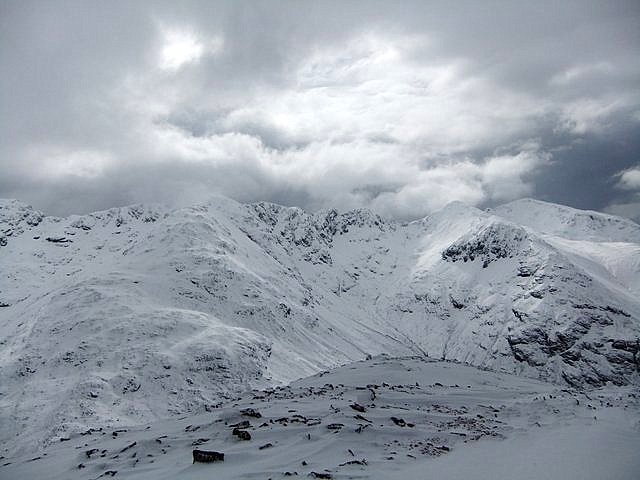 As was the view of the Pap and Loch Leven

I spent quite a while on the summit, just enjoying the unexpected views, given the cloud that had appeared to hang over the hill up until that point. As plan C’s go this one had turned out quite alright And again and again The view of the scrambly bit on the return That view yet again Am Bodach on the Aonach Eagach route And to top it off, having got back down to the car I stopped off on the way home for a posh coffee and perhaps the best slice of chocolate cake I have had in a long while looks a crackin hill ..gorgeous views ..what a treat

Very nice indeed , that looks like a fine day out , not bad for a consolation prize .

Excellent Peter not to shabby for a plan c

SAVAGEALICE wrote:looks a crackin hill ..gorgeous views ..what a treat

Thanks Savagealice. It is a good hill this one

One for those days when you want to get out, but you don't really want too much of an adventure

The cake was just the perfect end to the trip

Gavin99 wrote:Very nice indeed , that looks like a fine day out , not bad for a consolation prize .

I went into Crafts and Things Gavin, just off the main road. Don't often stop on the return route home, but as I had an earlier finish to the walk didn't want to turn down the chance

jonny616 wrote:Excellent Peter not to shabby for a plan c

Thanks jonny, and you're right it wasn't a shabby plan C

Beginning to wish I'd gone out instead now

Thanks mr ash. It's a good little walk for a half day wander

And I was certainly blessed with the views I had too

Nice one Pete, sometimes the unplanned ones turn out some of the best ones (did the AE Ridge when I was en route to the Mamores

lomondwalkers wrote:Nice one Pete, sometimes the unplanned ones turn out some of the best ones (did the AE Ridge when I was en route to the Mamores

Thanks lomondwalkers. The view down lochlomond is fantastic from this walk (you can probably tell I likes it by the number of photos I took of it

Excellent report Pete.
Sometimes these unplanned trips are the best - it looks a great wee hill and like many Corbetts the views on the way up are unsurpassed, in my opinion.
Iain

That seemed to be an excellent Plan C, Pete, amazing you could come up with so many plans

I'm all for stopping for a good piece of chocolate cake

Always have at least up to a Plan C Pete! And a D and E are often advisable too! I've considered this hill a few times and it is an outside contender for this year sometime! Only criticism of your report is that it could have benefited from some views of Loch Leven and the AE!

Graeme D wrote:Always have at least up to a Plan C Pete! And a D and E are often advisable too!

You'll soon have as many plans as Graeme