Richard and I did the Grey Corries ridge quite a few summers back one June from our holiday let at Fort William. So far it’s been my favourite ridge ever and probably a strong contender for Richard’s too! We keep meaning to do it again but haven’t had time yet. As my parents were staying at the holiday let with us, we decided to do it as a traverse from Corriechoille Farm near Spean Bridge and then back via Glen Nevis. We were dropped off at the farm around 10am and set off briskly up the mile or so to the forest. It was a bit sticky and midgy through the forest so we hurried through. As you clear the forest, the start of the long climb up to the ridge appears. There is no path and appeared to be no best line so we traversed diagonally up the first steep bit of grass and then just went straight up, keeping as near to the edge as we could as it became more defined, for the views into Lairig Leacach. I have to say that this long plod upwards seems to go on forever as it is pretty featureless – the only bad bit of the day really… 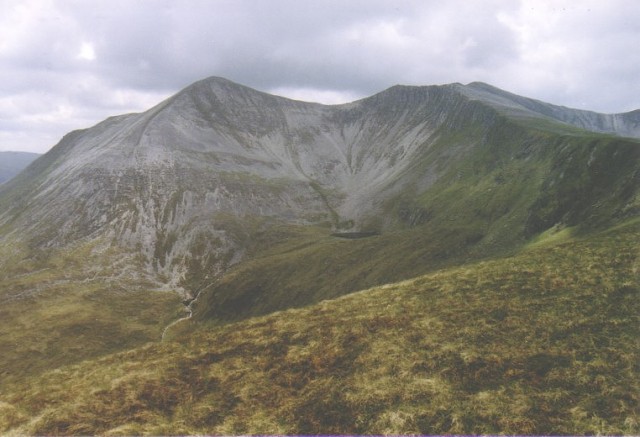 A path now appeared and followed the corrie rim up to the boulderfields on the ascent of Stob Coire Claurigh, the largest of the range. At some stage the path does a nearly right-angled turn to the right and goes along a narrow section (mentioned in one of the Munro books but I haven’t been able to find the description since). I had a feeling this had a big drop, especially having read about it, and we were on a little side path traversing above it, so to save myself getting stressed, I simply didn’t look. As I reached the far end of it, Richard enquired from behind how I’d found that bit – I just said I hadn’t seen anything! He told me it wasn’t quite my sort of thing and he was surprised to get so little fuss from me as I crossed it – the joys of a narrow focus!

Then we were on the summit with beautiful views all around, most especially the view along the ridge - what a stunner! The ridge twisted sinuously away over humps and cols. I was slightly worried about the crags of Cath na Sine but decided just to see what happened when we got there. There was a pleasant path wound its way down the narrow grassy ridge – both sides were quite steep quartzite scree - it looked beautifully white and shiny under the sun of the now glorious day we were having. All the way along the ridge there are interesting and pretty side ridges and spectacular corries. We were soon negotiating the surprisingly easy route up the crags of Cath na Sine. This is a great place to look back at Claurigh for the classic guidebook picture of it through a notch in the crags. Of course I had to snap it for my collection too! Further along the ridge, between Caisteal and Stob Coire an Laoigh, there is what I called ‘the pavement’ – a quite narrow but flat-topped ridge between the peaks. We thought that might be another problem for me but clambering along the top of it on huge, square quartzite blocks was really easy and the sides weren’t really steep so I was fine. In fact I enjoyed the high level promenade with superb views either side and ahead to the crags below Laoigh. Then there was a short ascent to Laoigh, followed quickly by a further but steeper ascent to Stob Coire Easain. This is where you have a choice to just take the northern ridge back to Corriechoille. 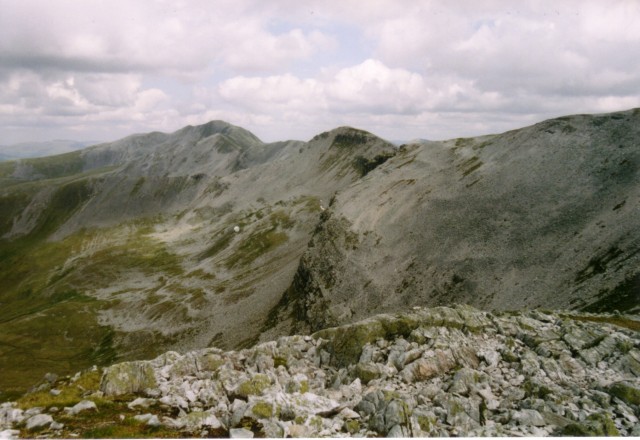 Looking back along the ridge...

We continued our traverse by descending the steep and narrowing rocky south-western ridge. This became another ‘pavement’ where we ended up descending atop an ever steepening narrowish spine of descending rock. It eventually reached the point where I was fed up of it and we found a gully each to descend down the sides to take a grassy route to our next objectives, Sgurr Choinnichs Mor and Beag. Sgurr Choinnich Mor looked to me quite forbidding from here. I can’t say I was over-keen on the ascent that side. Richard went up the path which stuck close to the left hand side over a very steep drop – I started off on it but soon chickened out and just ascended the boulders and scree straight up the shoulder (basically straight up the ‘knob’ in the picture). From here there was a short, flat section which a little hollow and was very pleasant for a moment. However, the ridge then narrowed dramatically and steepened up towards the summit. I didn’t have much fun on this bit as the drop on the left got ever bigger and more sheer, but eventually, after a little traverse of the side of a narrow, flat section, there was a final clamber and we were there.

The descent down the far side was the complete opposite – gentle, grassy and pleasant! We were soon on the next col and quickly ascending Sgurr Choinnich Beag – a nice but steep grassy peak. We descended steeply with no path down the far side of this to the col before Stob Coire Bhealaich where there is supposedly a route up to the Aonachs. I could pick out a little path starting out but it didn’t take a route I could ever see me doing! From this col we plunged down the grassy mountainside to the dreadful bogs of upper Glen Nevis. From there it was a case of trying to follow the path while finding enough old treestump roots to balance on to keep your feet dry! Took quite a while to walk to the Steall ruin where the path improved considerably – there was far more ruin in those days… From there we passed my favourite Steall rope bridge - I had to have a quick play, much to Richard’s impatience as he was finding it a long day! We then descended the Nevis Gorge and set off from the top carpark down to Achriabhach with me trying to get a phone signal to try to get my parents to pick up the by now knackered Richard. I think he’d had enough of the heat as much as anything as it had been pretty hot all day (I love it). As the glen widened I finally got a signal and phoned my parents to see if they fancied a trip into Glen Nevis. We arranged to meet them at Achriabhach carpark and waited in the sun for them. A great but long day!