May Bank Holiday 2005, Richard and I had joined my University Walking Club on a Torridon trip. We’d mostly had lousy weather and had only done one walk with them which was Beinn Eighe (see my ‘Beinn Eighe and the Upside-down Corrie’ report). Our last day was decent weather and, as we were actually staying at the Ledgowan Hotel at Achnasheen and not at Torridon SYHA with the others, we decided to do Slioch as I’d had my eye on it for quite some time...

We parked at Kinlochewe as we didn’t realise (until we passed it after we’d set off) that there was a carpark at Incheril. Richard tried to send me back for the car as apparently it would save time but I wasn’t having it! So we walked through the carpark, through the gate of what we would call around here ‘the intake wall’ and were off down the Kinlochewe riverbank – a beautiful walk which takes you to Loch Maree in about 3.5 miles (from where we’d parked). 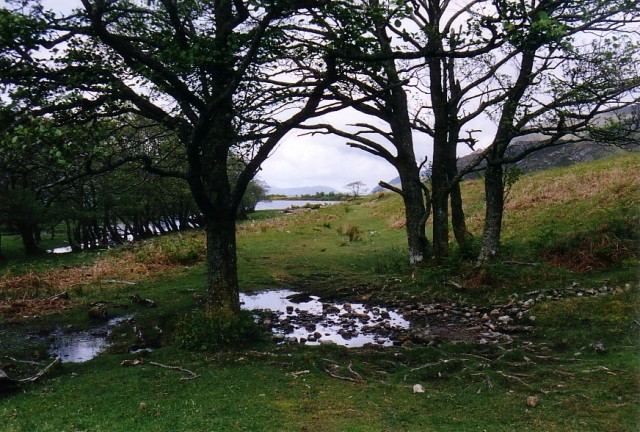 We made good time to the bridge crossing the Glen Bianasdail river and then headed off briefly up the glen. You soon see a path taking off up the very wet and soggy moorland towards the gap between Meall Each and Sgurr Dubh.

Rounding the end of Sgurr Dubh through the gap, the spectacular and huge Coire an Sleagaich bursts into view. 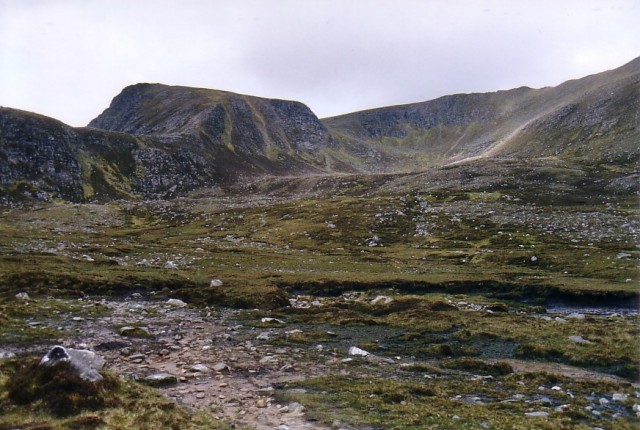 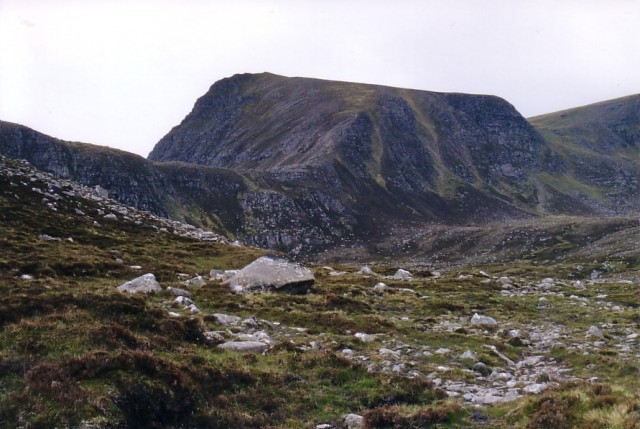 The normal route heads across the very flat floor of this corrie to the far side where a path rakes up onto the shoulder before the very steep part of the climb to the summit. This shoulder has 2 pretty lochans. I didn’t fancy walking all the way across the corrie as I fancied the ridge from Sgurr Dubh to the lochans so I just ploughed off up the hillside onto the ridge – startling a ptarmigan on the way up. Richard reluctantly did the same (although he prefers a path really). Soon I was glad of my diversion as it was a very pretty ridge. 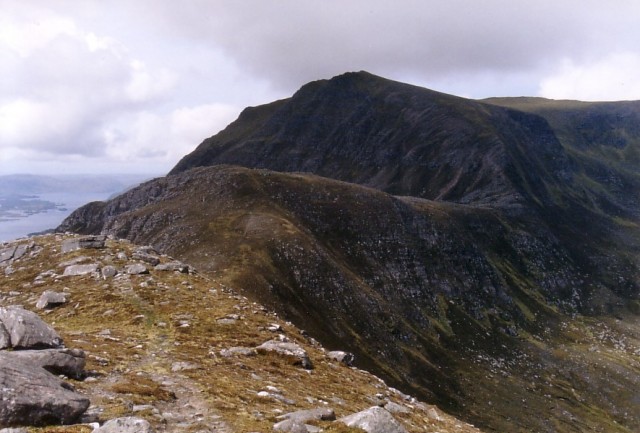 We were soon at the lochans where the shoulder looks daunting as it has a crag on the end but the path rakes past the side of this on scree and is very straightforward. From there it’s quite a long and steep plod up to the main summit area. There was a group of blokes ahead and I soon steamed past them with Richard in tow. By the top of the steep bit I looked round and found Richard was only half way up (he isn’t really into racing) and the blokes were still near the bottom. 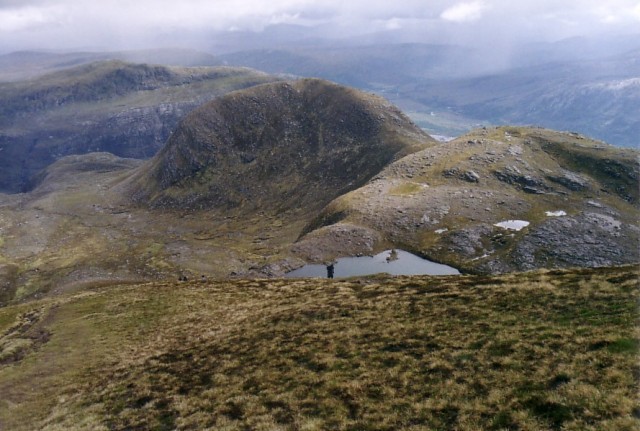 I waited for Richard while admiring another lochan near the summit. The light was catching it nicely and it set off the second summit of Sgurr an Thuill Ban nicely so I took a couple of photos. 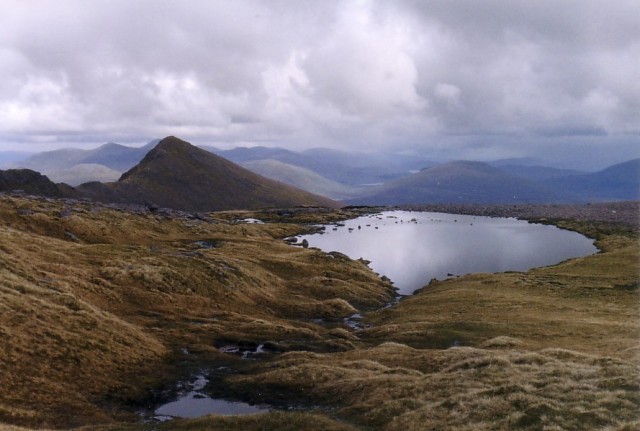 From that point, after a false summit, we reached the summit ramparts – and what ramparts they are. Totally spectacular views all round, Loch Maree with Beinn Eighe across it, the Letterewe lochs, A’ Mhaighdean and the other Fisherfield Peaks and, beyond them, An Teallach. We both enthused about the changing view all the way round, it was often punctuated with steep ridges leaving the ramparts and going down to Letterewe. They looked like people had at least gone partway down them to explore them as they had little paths on the top – I wasn’t sure you could actually descend the mountain on them though – I think they finish very steeply. 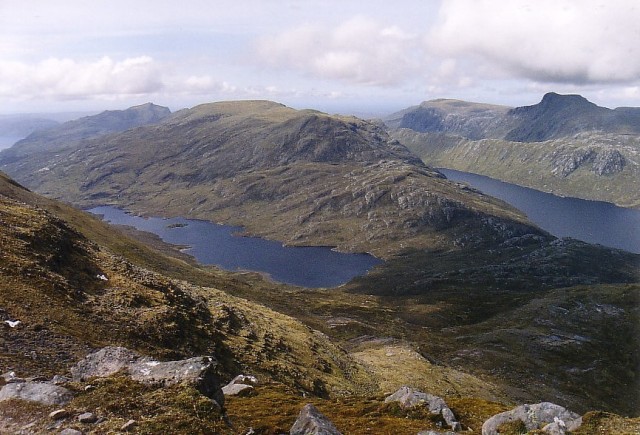 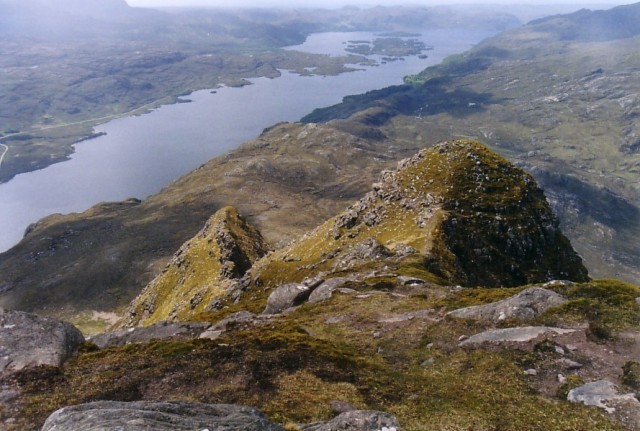 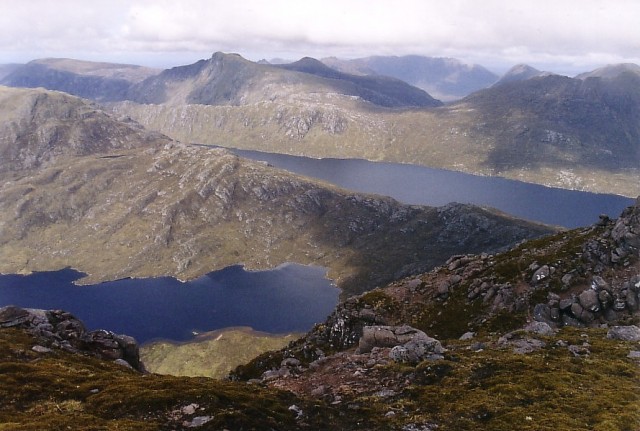 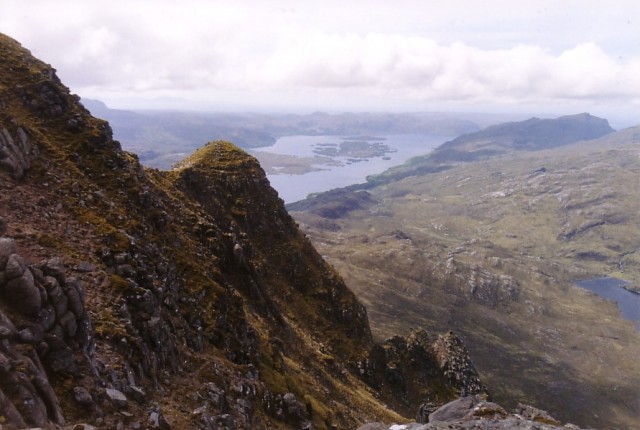 There is a slight dip and then you ascend a narrower (but not scary in any way) ridge across to Sgurr an Thuill Ban, a nicely peaked summit. From there we just wandered down the ridge until we felt like descending back to the corrie and went back the way we came. 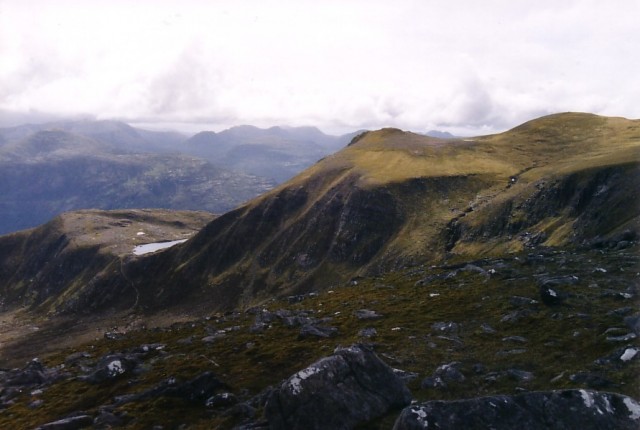 At the bridge over the Glen Bianasdail river we took a long break and admired Loch Maree. It was a lovely sunny spot by some nice waterfalls.

Just as we were packing up and setting off, the group of blokes came to the bridge. Totally unable to resist the challenge, I was off again, poor Richard back in tow. Trouble was, they were quite fast on the flat and were nearly catching us up. This meant we had to go faster and faster for nearly the whole 2-3 miles or so back to Incheril. Every time they got faster, I got faster... It was just getting to where I was sure I was going to drop dead as it was quite a hot day (either that or Richard was going to choke me) when, after passing through a gateway, I looked back and saw the guys collapse on the banking to rest. I then switched back to a normal walking pace and Richard finally got enough breath back to rollock me! I don’t know why he bothers keeping up with me on my little races – it’s not like I was going to drive back to Achnasheen without him!

Good to know i'm not the only one who 'races' others on the hills - some form of compulsion to be alone on the hill?
Nice report, MC.

This was one of my favourite hill days on a scorching May 2008 day. Unlike you, I really took my time - partly due to the heat and partly due to a bit of tiredness after Alligin the previous day (also a scorcher

). I even had a wee paddle to soothe some achy feet

kevsbald wrote:Good to know i'm not the only one who 'races' others on the hills - some form of compulsion to be alone on the hill?
Nice report, MC.

Nope, definitely not a compulsion to be alone - I actually like meeting people in the hills... just, if they're going the same way, I can't have them pass me and, if they're up front, I have to pass them!

I'm just really competitive by nature and am forever measuring myself against other people's achievements and fitness...