The Great Zit & A Handful of Langdales.

The Great Zit & A Handful of Langdales.


It had persisted down all night since I’d pitched my tent at the Great Langdale NT campsite so I tucked myself in early with the first of Martin Edwards' Lake District Murder Mysteries. Books I’d incidentally seen recommended somewhere amongst the midst of this site. Apologies for not remembering who it was exactly that mentioned them but thanks if you ever read this! With the rain hammering on the tent & wind roaring through the valley outside, helping add to the drama, I was soon gripped with images of murder & sacrifice stones. Needless to say I stayed up far later than was wise trying to figure out who-dunnit. Before I reached the end the next thing I remember was being rudely awoken at 5am by an almighty kerfuffle. Upon peering outside I discovered the local Rabbits holding a pitch battle with some invading Jackdaw hoodlums. Immediately my thoughts returned to murder but this time it was me I was picturing standing over the sacrifice stone, knife in hand, with the limp body of a Jackdaw lying on the sacrifice stone. Sunshine trying to break through further up the Langdale Valley.

I tried for a while to get more sleep but it just wasn’t happening so by 6.00am I was up & ready to go for a walk. I had two choices in mind for today, Pike of Blisco over Crinkle Crags to Bowfell, or trying my luck with the 8 peaks around The Langdale Pikes. With low cloud still engulfing the Crags & Bowfell barely visible the decision was made for me & I headed along the road down behind The Old Dungeon Ghyll to pick up The Cumbria way down to The New Dungeon Ghyll & the start of the climb up alongside Stickle Ghyll. The walk up to Stickle Tarn will always hold fond childhood memories for me. Here was the first place I can recall my Old Man taking me & my sister hill walking with him up Harrison Stickle when we were but young whippersnappers. That must’ve been 30 years ago at least now, maybe more. The stepped path isn’t everyone’s cup of tea but I can vividly remember how badly eroded & crumbly the old path was back then. I’ve been up here a few more times in the intervening years & I still think it’s nothing short of a miracle how good the path is now compared to then considering the pounding it gets year on year. About half way up to the tarn looking toward Lingmoor Fell & Side Pike.

I was blowing a bit upon reaching the top at Stickle Tarn but my heavy breathing was soon replaced by excited gasps when I glimpsed sight of the Pavey Ark cliffs set perfectly against the still dark water of the Tarn. Good to know it still gives me goose-pimples every time I get to this point. Realising I had the place to myself, thanks to the early alarm call after all; I plonked myself down for breakfast. That’s when I first felt the all too now familiar twinges in my knees. The Arthritis had decided that it just wasn’t going to lay quietly today so plans quickly changed. Blea Rigg, Sergeant Man & High Raise were quickly but sadly scrubbed off the itinerary, leaving me to concentrate on the closer peaks. First up then was Pavey Ark, but which way? Jack’s Rake beckoned for a very brief moment but as a relative novice, up here on my own & carrying a pair of dodgy knees (did I also mention my yellow bellied, chicken livered, nervous disposition) I soon settled back to the comfortable walk along the eastern side of the Tarn & up to Pavey Ark via The North Rake. It still needed the occasional use of hands up this way so at least I could pretend to myself that this was proper hardcore mountaineering for a short while with nobody watching. On the way up the North Rake.

Upon reaching the summit of Pavey Ark the strong wind coming straight across the top of the moor from behind me afforded just a quick peek over the cliff edge & it was quickly over the moor to Thunacar Knott. Like many others, I’m not sure myself how the Great Man, AW, went about deciding which hills were worthy of his pen or why he felt compelled to include some and not others amongst his works but Thunacar Knott must surely be up there, amongst many others, as one of his most dubious inclusions. I guess it’s amusing that what seems to me to mount as not much more than a blimp of high ground across this moorland attracts so many baggers, who like me, quickly touch the cairn & immediately shoot off looking for somewhere more interesting. Maybe there’s something I missed, perhaps there’s a history to this lump that I’m blissfully ignorant of? With the cold wind battering me I wasn’t too keen on hanging around waiting for any answers so I too was hastily off to the next peak & back over to Harrison Stickle. 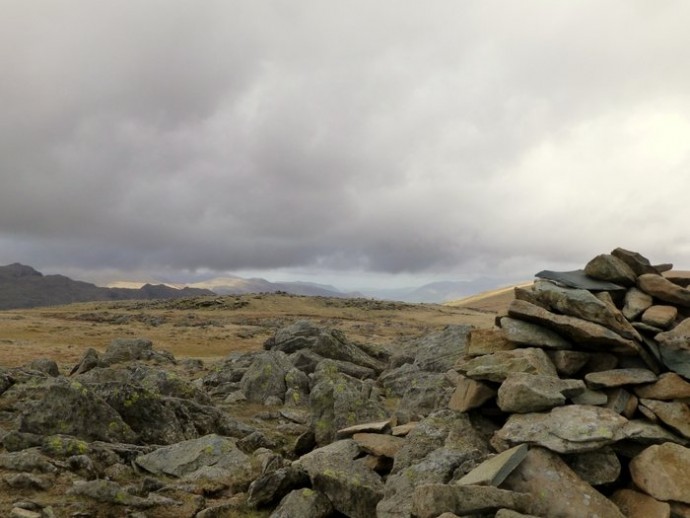 Harrison Stickle now that’s a proper peak, full of rugged grandeur & in a prominent position to afford glorious views. Just don’t look behind back to Thunacar Knott or the crushing disappointment of having been there will only drag your sudden elation back to new found lows. However there’s also now a new nagging distraction to the west. I tried to look elsewhere for views as the cloud began lifting but all the time my eyes were drawn over to Pike of Stickle. It’s akin to talking to an acquaintance that’s sporting one massive custardy zit. You’re trying your hardest not to stare but you keep finding your eyes drawn to that spot. Maybe it’s the shape of Pike of Stickle but it was an image I found increasingly hard to shake from my mind until I walked up along the manufactured path that runs to its halfway point and simply just disappears into oblivion down into Mickledon. Dropping my pack to the ground, including my camera, it was then just a case of finding my own route up over a short scramble to the summit. Naturally I think I picked the most difficult route up I could find. Not through choice just sheer ignorance & if I’d just gone 20 paces back down the path there’s a much easier route to the top. "The Great Zit" - Pike of stickle from Harrison Stickle Summit. "The Great Zit" ready to explode.

Upon regaining the path toward my final peak of the day, Loft Crag, the sun started to make an appearance for the first time but its arrival also seemed to coincide with the arrival of hordes of other walkers. I’d had no sight or sound of anyone else being up here with me so where had they sprung from so suddenly? Fortunately, none of them were heading in the direction of Thunacar Knott I may add & I was able to go about my business happy with that knowledge that I wouldn't have to run over & ward them off. The quick way back down! Glimpses of Blea Tarn behind Side Pike A short walk along the ridge to Loft Crag & I was all too soon heading downward back across to the New Hotel & along the Cumbria Way to the Old Dungeon Gyhll. Back in plenty of time for an alfresco liquid lunch in the sunshine & the final few chapters of my book where I learned I had guessed completely wrong who-dunnit!!! Dismayed at my abysmal future career prospects as a budding detective I sat in the Beer garden eaves-dropping as gradually I was joined by other groups of walkers, most of whom were coming back down from Crinkle Crags & Bowfell, excitedly regailing one another with tales of their walks. Tomorrow, I thought to myself, but sadly it wasn’t to be. The combination of weather when I awoke next morning & the still nagging pain in my knees meant that’d be the end of this short jaunt in the Lakes but on my wife’s instructions it’s looking like I’ll be back sooner than expected & next time she even insists on joining me! A great little round with good pics i agree with you on Thunacar Knot theres a few wainwrights like that.

Cracking walk, When I did a very similar round my knee went off on the way up to Stickle tarn. It was then OK when going up hill and screaming agony going down, unsurprisingly I missed out Thuncar knott but hobbled around the others.

Great Wander CB, I really like the langdale pikes and especially the jack's rake - great scrambling route. You managed to get some really nice shots there as well!!