Well here it is my first report

Arrived eventually at the car park at the dam, after having trouble locating the dam, blaming the satnav in the car (of course), always very wary when you see all the private road signs put up by the land owners to deter us adventurers.
I would like to pay compliment to whoever created the route description/instructions as they were fantastic, only looked at the map briefly & not really sure why Here are the two gates to choose from, take the right hand one

You then go past an odd looking building Modern design not sure what happens in there

Then it's over a metal stye, before getting into full swing 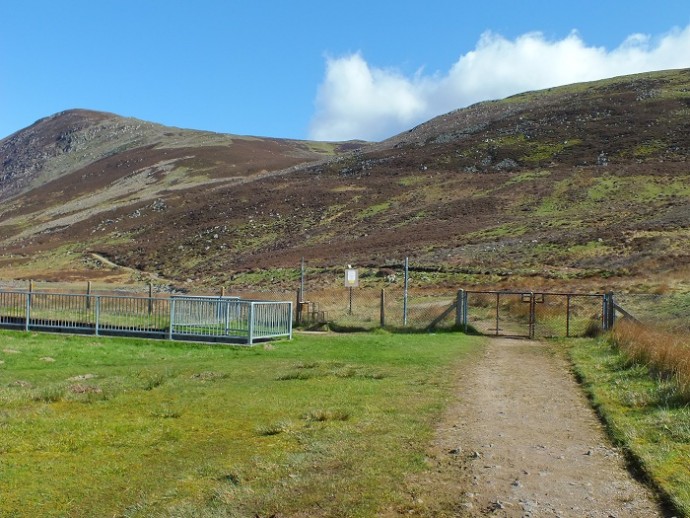 Metal stye just to the right of the newer fence

One then follows a rough track for the next 4 & 1/2km, very easy going with the loch on your left. Rough track all the way to the head of Loch Turret The head of the loch, minus the path (oops)

The track then almost doubles back on itself with a slight drawback, one then starts to ascend

The majority of the height is gained on the next stage & still on the same sort of path, with some superb views looking down the loch. You can also see who (if anyone) is following on behind Both paths visible, as you can see almost doubling back

After gaining more than 1000' (whatever that is new money), one then reaches the next junction in the paths, take the left hand one & off one goes again Once the height has been gained the 2 cairns can be seen from quite a distance away (weather permitting of course), but first you have to negotiate a little bit of peat Not as bad as it looks

Then the summit is reached, not a difficult walk at all The 2 cairns on top, not sure which was higher, was a tad blowy & had trouble holding the camera still

Retrace your steps, except I took a short cut down rather than go back to the head of the loch where the paths meet I ventured down the grassy hillside (much quicker), if sheep can do it so can I

A few extra scenic photo's thrown in at no extra charge Ben Lawers don't remember it being that pointy