Munros included on this walk: An Caisteal, Beinn a' Chroin


"Super-Chase" took a {Flyer}, stormed the Caisteal, and just kept on Chroin!

With Chase having a week off school, I had planned a few days away in Crianlarich. My plan was to try and get 2 Munros done in a single day; this would be Chase's first double. Two nights were booked in the Crainlarich YH, giving us a full day's walking time to enjoy the hill, without having to worry about getting finished in time to catch a train home.

Breaking with my normal practice, I posted my plans on the "Meeting up" forum, not really expecting much if any response. Two replies came back;

"StephenT" would also be in the YH the same time as myself, but with different plans for the Glencoe hills.
It was good to meet you ST; I hope you had the same great weather we did, and an equally enjoyable day.

"Fife Flyer" was off work, so drove across from Inverkeithing to join us for the day.
Martin (Flyer), Chase & I really enjoyed meeting you, and sharing your company throughout the day. The bonus of the transport to and from the starting point was also greatly appreciated.

Martin picked us up across from the Crianlarich Hotel just after 0900 and we were parked up and setting off for the hills just after 0915. The sun was shining, the clouds were high and all signs were pointing to favourable weather for our walk. A 30 minute meander up the landrover track had us at the only gate across the track, which is also the point where we took to the hillside, to start our climb towards Sron Gharbh. The climb to Sron Gharbh isn't too taxing, more a case of plodding on up, taking whatever route you find most agreeable. 04. A bit of perspective; and a taster of the views we had all day.

We had plenty of stops, taking in the views, resting our old man legs, as Chase took point. The sight of a low level flying Eurofighter beneath us was a nice touch in the early morning sunshine. It took us 2 hours to reach Sron Gharbh, but didn't really feel like it. The weather was definitely making the ascent a relatively easy one. From Sron Gharbh, the obvious path to An Caisteal showed the way.
Chase's assault began in earnest from here. 06. The Caisteal's obvious line of weakness. 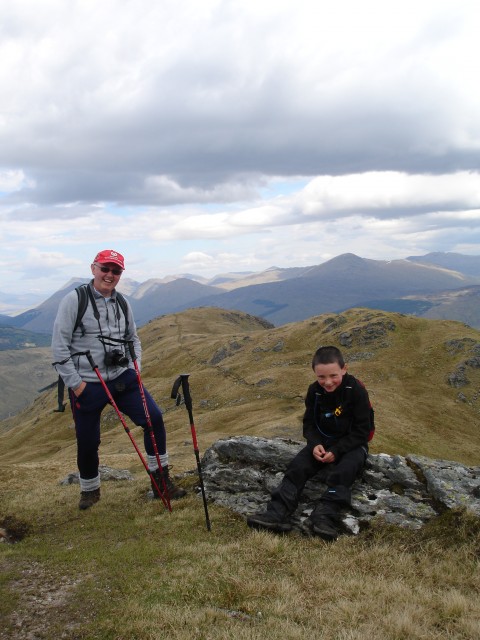 07. Chase & (Fife Flyer) taking a rest; the path back to Sron Gharbh behind.

The higher we climbed, the greater the views were. The clouds would not be spoiling Chase's first double, and clear summit views were almost guaranteed as we made our way higher.
Chase was in his element, running about like the little boy he is, looking out for sheep, deer and Gruffalo footprints along the way. The later proved to be an elusive, if not light footed, beast.
We stopped for a bit of lunch about 1145 (2400ft) and it was out with the Chicken Broth, Cheese Sandwiches and Pineapple Chunks. There may have been some chocolate in there as well. We set off again about 1200 and it was soon time for Chase to take on the Caisteal's first line of defence. This proved to be little more than a perfect time for Chase to practice his scrambling, and with the encouragement and support of Daddy & (Flyer) he had quickly breached the first defences.
We found no boiling tar behind the outer wall, only a slippery (and futile) attempt to slow Chase down. 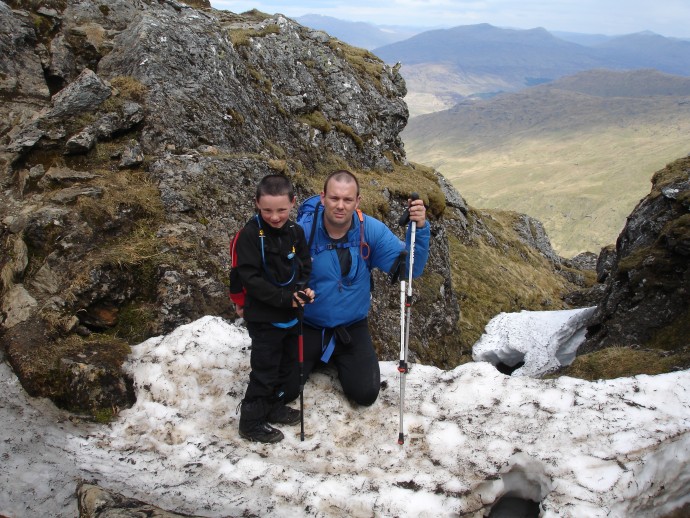 With the outer defences breached, Chase could smile, proudly knowing that the inevitable victory would soon be his. 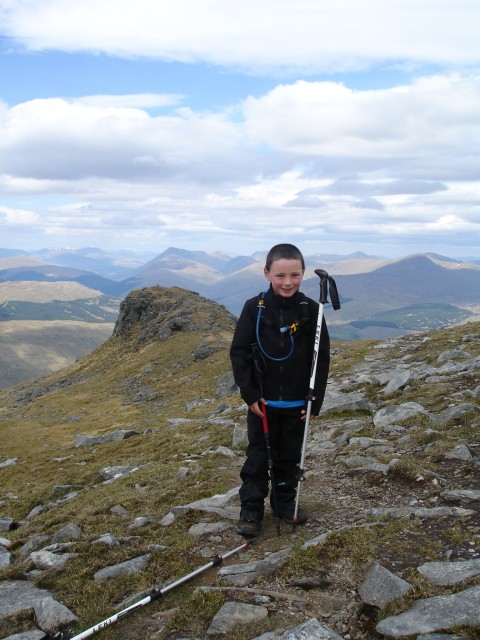 11. Chase, above the conquered battlements.

We paced ourselves the rest of the way to the summit, and at exactly 1230, Super-Chase claimed his prize. The old men, trying to look as fit and fresh as Chase. 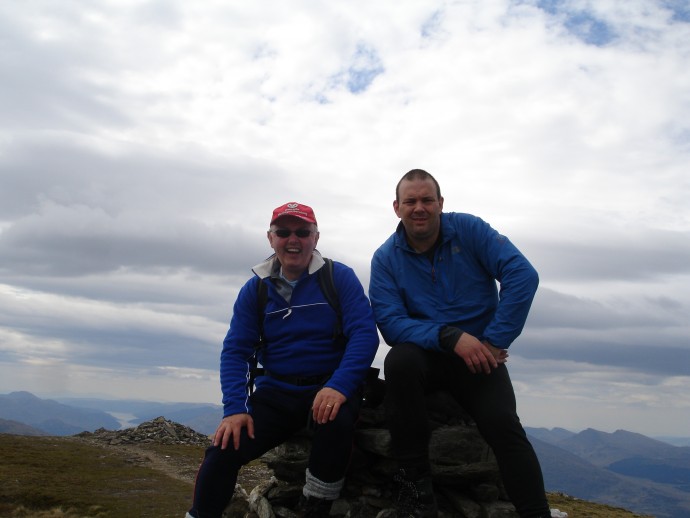 We stayed on the summit for about 15 minutes, enjoying the views, and (allegedly) a little more chocolate. The sun now high and bright, the clouds no more that fluffy decorations to the amazing views. Hills, upon hills, upon hills. We could not have picked a better day. A priviliged three were we. 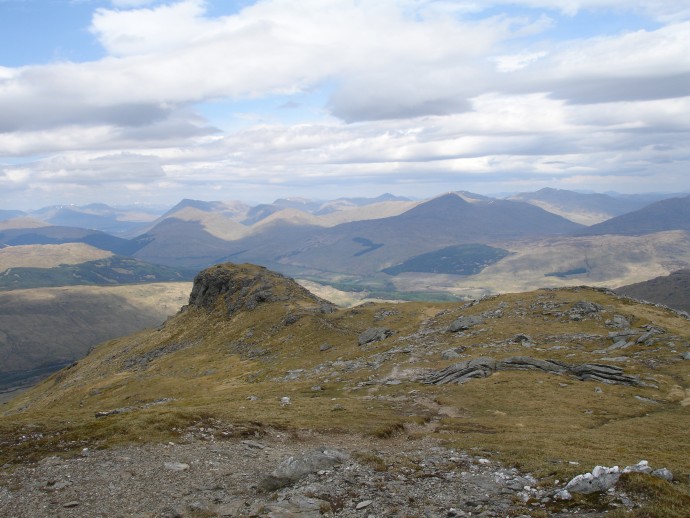 16. The view North from An Caisteal.

We set off for the bealach (Buidhe) about 1245, and this was the most technical part of the day. It's a steep, but obvious path down, with quite a few little exposed sections, but nothing too difficult. Martin (Flyer) took the lead, with Chase and myself working our way down behind him. Chase only needed a supporting hand here and there; "bum shuffling" sufficing for most of the bigger steps. 17. Martin (Fife Flyer) heading down to the bealach from An Caisteal.

By 1330 we had reached the bealach, where the now obvious line up Beinn a' Chroin could be seen. 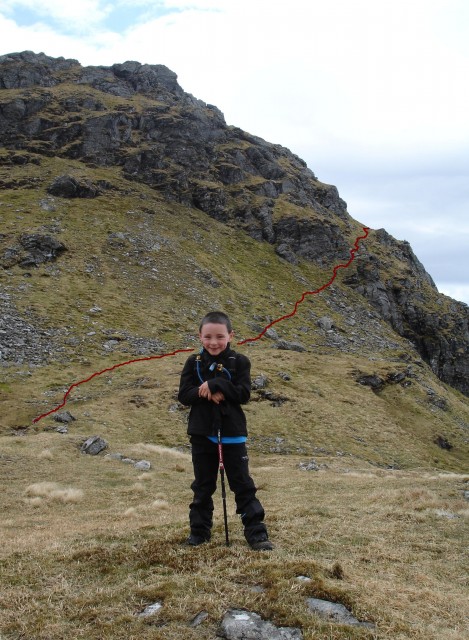 18. Chase at the bealach, the route up Beinn a' Chroin behind.

We didn't hang around, we were all feeling good.
Chase was eager to start heading "up" again. There had been no mention of being tired, or wanting to turn around, and (if anything) he appeared to wanting to move quicker than before.
Martin (Flyer) took the lead again, working his way up and through the twisty path. Chase followed, and I brought the rear. 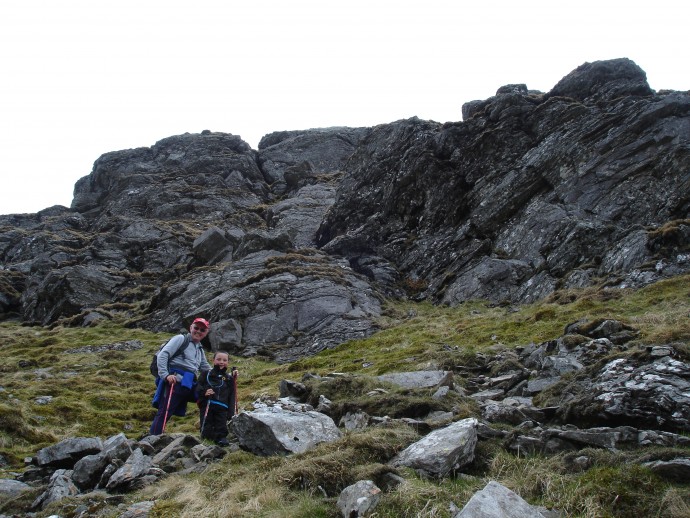 There is only one section of the path up Chroin that needs proper hand and foot work. The exposure (and the drop below) is what makes it feel a little hairy. We were definitely happier going up this way, and not dealing with this as part of a descent. Martin (Flyer) gracefully

went first, then gave Chase a helping hand up as I supported from below.

Soon after that, just after 1400, we were at the West Top of Beinn a' Chroin. 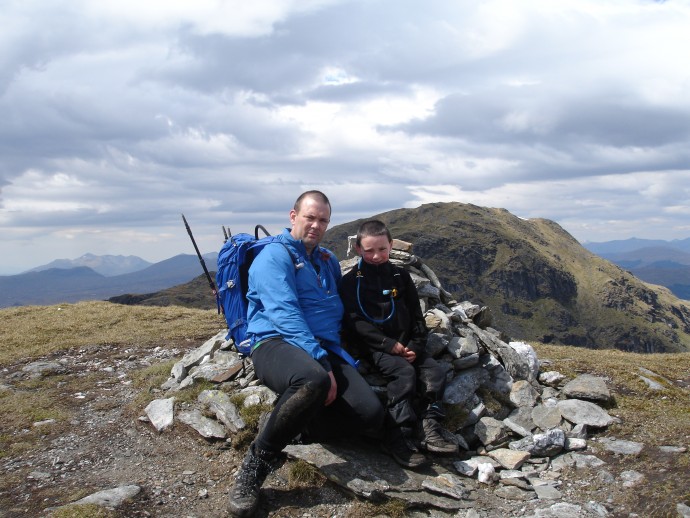 20. The West Top of Beinn a' Chroin, An Caisteal behind.

We headed on towards the main summit and it was en-route there that we met our first other walker of the day. John from Lands End was "out for a walk" with his mate's dog. John, with 170 Munros under his belt, was moving a bit faster than ourselves, so we all agreed to meet at the summit for a proper chat.

We reached the summit of Beinn a' Chroin about 1450, where Chase claimed his 2nd Munro of the day, now 5 in total. 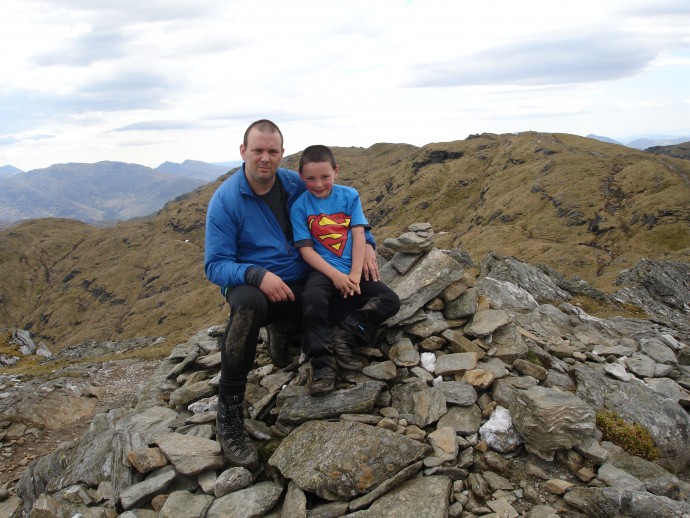 We stayed at the summit for about 10 minutes chatting to John and Sam the dog. It was here that the only other walker we met, also caught up with us. Eric, from Belgium, (& John) were both happy to accept Chase's gift of a Carbury's Fudge, as reward for successfully claiming the summit.

We left the summit of Beinn a' Chroin about 1500, following the twisty path down to Coire Earb. We stopped for a few minutes of fun in the last of the Winter snow. 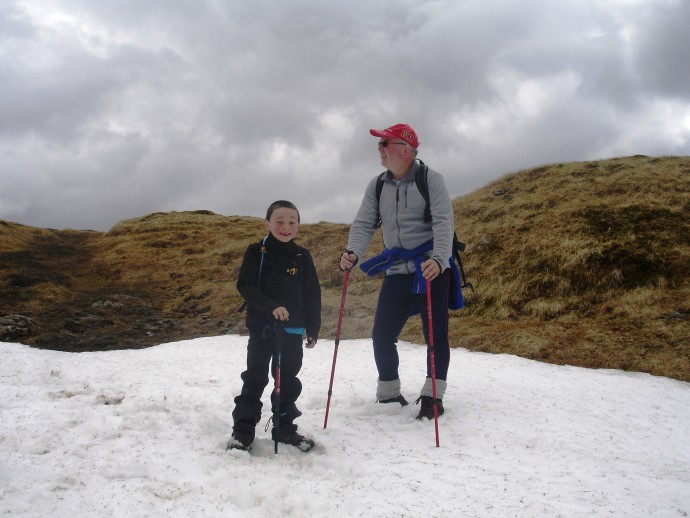 23. Heading down from Beinn a' Chroin's East Top; Winter isn't finished yet.

As we neared the floor of the glen, Chase stopped to pose with his latest hills behind him. 24. Chase heading down to Coire Earb, his latest hills behind him.

We reached Coire Earb about 1545, and the it was then just a case of making our way back down the the glen. Conditions under foot were better than expected and, although still plenty of squidgy, boggy bits, careful manouvering had us back on the landrover track with relatively dry feet.
This did not apply to Chase; after bagging his hills, he was quite happy to be finding the stickiest parts of the bog. What you gonna say? Nothing as it turned out, he had worked his little legs off for 7 hours straight, so back to being a messy 6 year old on the way home was just fine by me.

We ended up back at the A82 just after 1715, bringing to an end a very enjoyable and rewarding 8 hours.

My thanks again to Martin (Fife Flyer) for joining us; it really added to our day having you with us.

Official times are as follows:

Great report Martin, don't remember all those photo's, but I do remember Chase mentioning something about you taking lots

Having said that, at least your's worked for most of the walk - another thing to add to the list of things to do - make sure the camera battery is charged

Thanks again for the company made for a great day out & the legs are fine, maybe getting fitter, but I somehow doubt it

Great report , love the commentary and the lines of weakness drawn on! we did AC in winter an didnt go onto BaC but looked a great day and well done to the wee(er) man for 5 so far! I better get my skates on !

coachmacca wrote:Great report , love the commentary and the lines of weakness drawn on! we did AC in winter an didnt go onto BaC but looked a great day and well done to the wee(er) man for 5 so far! I better get my skates on !

Thanks for the comments coachmacca.
I've always tried to include some route lines on my pictures after seeing someone else's reports pictures with them. I found them a great help when trying to spot "less obvious" paths.

I'd been up AC before (on my own) but I bailed out on doing BaC from the bealach. High Winds was my excuse, but tired legs was the truth.

Chase is gaining confidence with every walk; I think i'll be fine until he can jump on the train or in car on his own. From that point, i'm sure he'll be quickly passing my tally and leaving me in his dust.

Well done you guys. Was up this way yesterday on my own. Your route up Caisteal was my route off. Something of a relief lol Well done Chase. keep it up wee man!

Hi Martin
Good to meet up in the Hostel the night before.
Looks like you and Chase had a good day.

Maybe catch up again at another time.
Stephen

Did this walk on Friday 5th July.Set of at 10.15 clear with hardly any cloud and good forecast. However when we were having lunch on An Caisteal thick cloud came down. Kept on to Beinn a' Chroin but saw no views. Cleared only by the time we were approaching the long walk in. Therefore great to look at your photos and see the views we missed. Well done to Chase also.