With another great weather forecast it was back to Glen Artney for the 3rd time this year as I still had Uamh Bheag to complete.

This is one place you will never have a problem finding a parking space!

The attachment Pic 1.jpg is no longer available

Leaving the car park behind, the first mile is along the tarmac road until you reach the bridge crossing the Water of Ruchill. Just before the bridge take the gate on the left of the road and head up the east side of the river through a field which tapers away leaving a narrow track between the slopes of Auchnashelloch Hill and the river. Am Beannan looks pretty steep but I find that hills often look really steep from a distance but when you get closer to them they don't look so bad. I had thought about heading round to the west of Am Beannan to make the climb easier but when it came down to it there was a great big challenge staring me in the face so I just put my head down and went straight for it. Bloomin hell - steep? This was hard, really hard, a steep climb, a very warm morning and absolutely no hint of a breeze - this was a bit of a slog

. Shades off (due to the amount of sweat dripping off me), sweat dripping off the rim of my hat, sun lotion running off my arms, trying not to drink any juice otherwise I would run out later on it's fair to say I stopped a few times for "picture opportunities". Am Beannan - close up - it still looks steep!

Finally reaching the summit there was the hint of a breeze - wonderful. The other good thing was that the climb to Meall Clachach and then Uamh Bheag looked far far easier.

Leaving Am Beannan behind (good riddance mate!) there was a narrow grassy track winding through small peat hags (compared with what was to follow

) to reach the top of Meall Clachach. 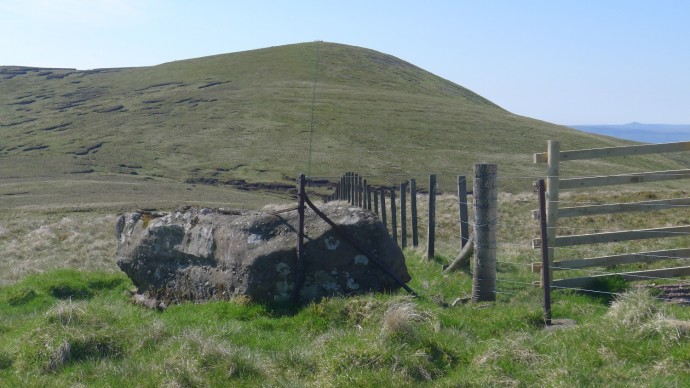 Straight forward walk down off Meall Clachach and then a short climb up to the summit of Uamh Bheag I'd been looking forward to seeing this guy "in the flesh" after reading a few WH reports on this hill. 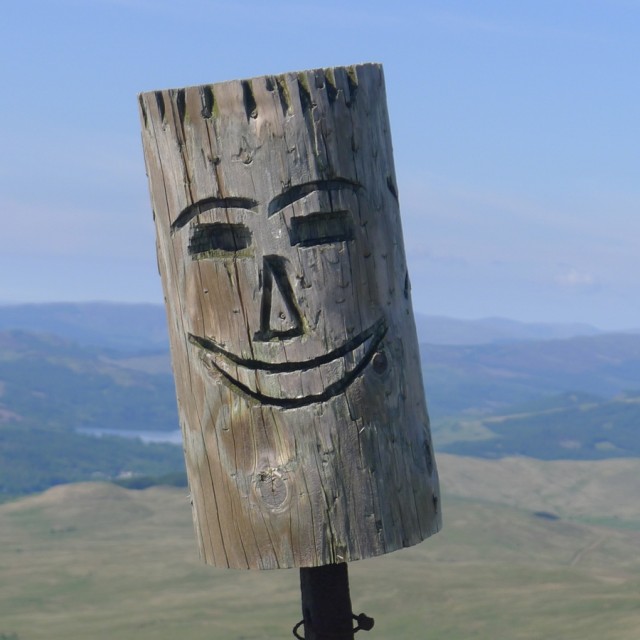 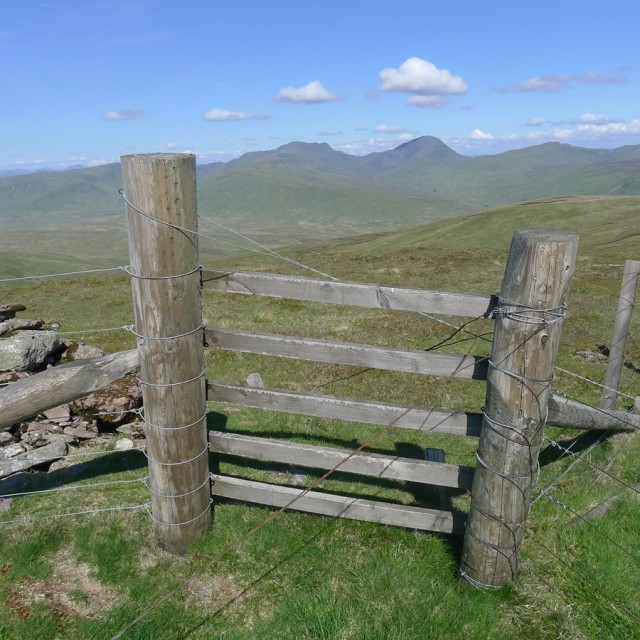 I had reached Uamh Bheag in around 2hrs 40 mins so it felt way too early (11am) to head back to the car so I decided to add Beinn Nan Eun on and turn the walk in to a circular. I had climbed this hill a few months ago (from the South East) and the climb up had been a bit of a peat hag toughie so I thought it would be good to come in from a different direction this time.

The walk over to Beinn Odhar was easy although in wet conditions could probably be a bit boggy in places. 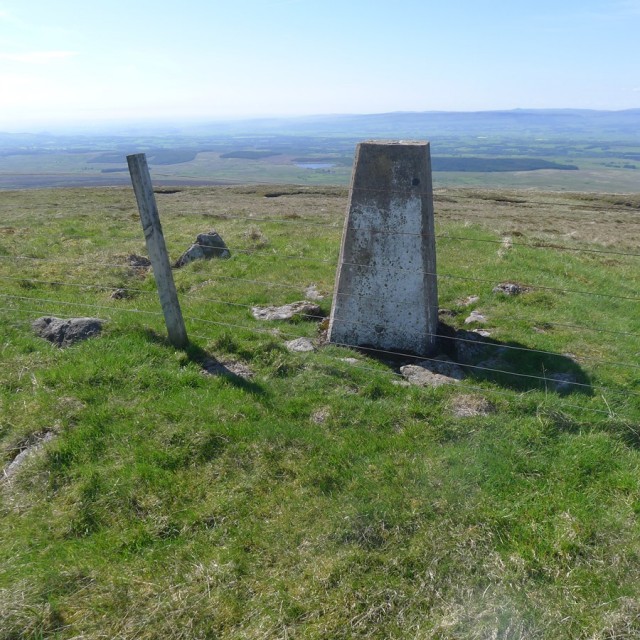 There was quite a drop down off Beinn Odhar with the line of the fence skirting a wind farm and before the start of the climb up towards Beinn Nan Eun there is a deep peat channel that needs a bit of care. Can't remember ever being this close to a windfarm on a walk before. 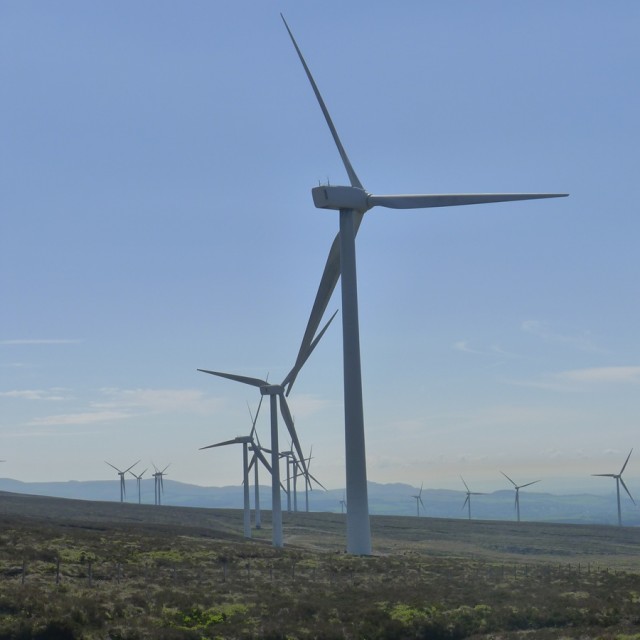 Close up of wind turbines

I had hoped that coming from this direction would cut down the peat hags after my previous experience on this hill but it was just the same and pretty frustrating trying to pick my way through the deep channels. A lot of meandering about trying to find the best route and the constant up and down was tiring in the hot conditions. On the plus side the peat was pretty dry so this made things easier than it could have been. 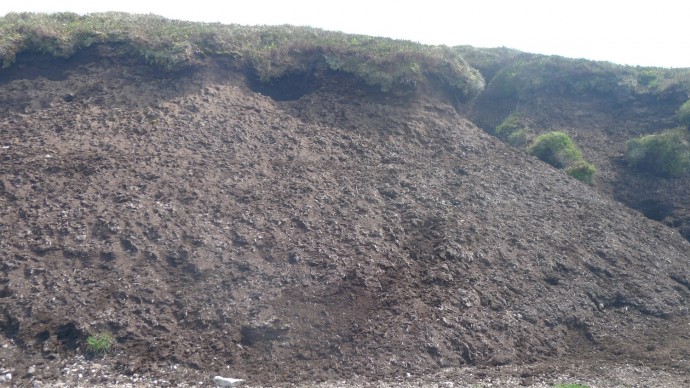 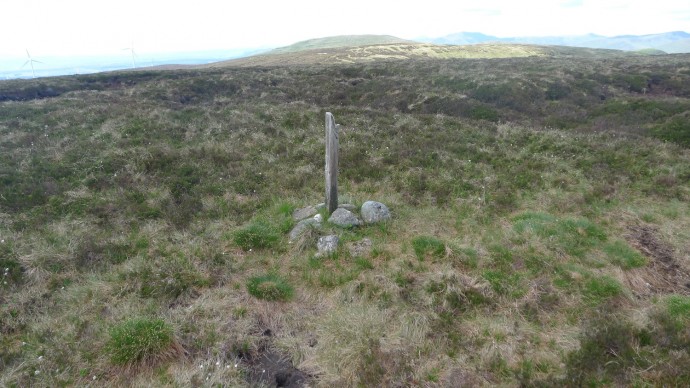 The route off Beinn Nan Eun is fairly straight forward always keeping west of the steeper rocky slopes. I headed in a straight line towards Auchnashelloch then I swung round in a more north easterly direction to head for the river crossing at Findhuglen. 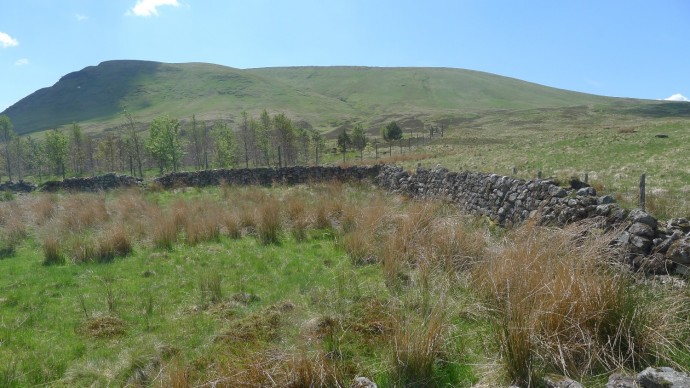 Looking back up towards Beinn Nan Eun from Findhuglen 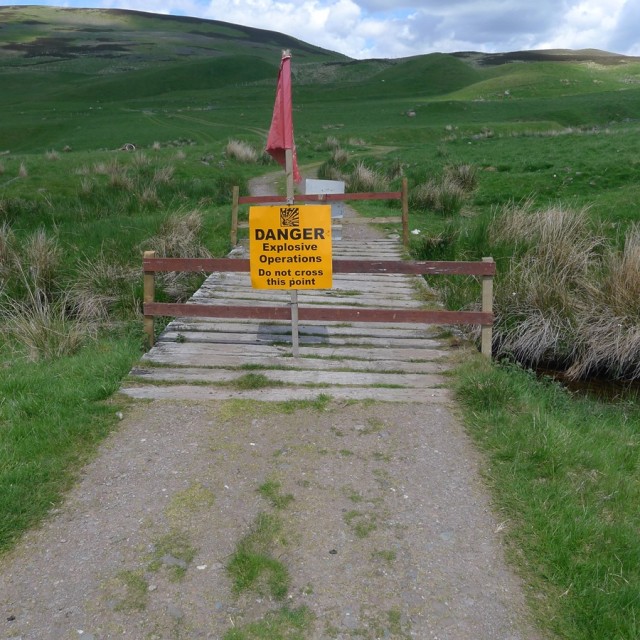 After four and a half hours in the heat I wasn't about to find a detour so on the assumption that they wouldn't be blowing up the track at the weekend (why would I think that?) I decided to clamber over the attempt to block my way and head on down the track.

I was about 10 minutes from the car when three land rovers with trailers came round the corner heading in my direction. Being the polite walker I am I moved off the track to let the land rovers passed assuming that one of them would stop and warn me about the dangers of walking through this area when the warning signs are out. Instead, all three drivers gave me a big wave and a hello through the open windows.

Back down at the junction of the track and the Glen Artney road the usual sign was in place. 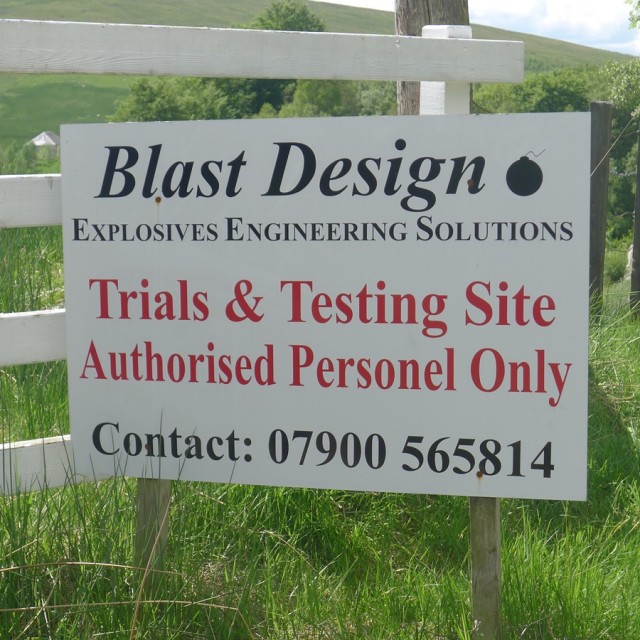 I always walk hear at the weekends assuming that if they are blowing anything up it would be during a weekday, I also check to see if the sheep are roaming around (my assumption being that they would let the local farmer know about their plans rather than blowing up his sheep).

No idea what goes on in this area but I imagine they are pretty successful in keeping a lot of people away from this track.

All that was left was to get down in to Comrie and find some cold coke before driving home.

I know what you mean Geordie, about SWEATING BUCKETS as I was on the Lawers group yesterday, water bag 3litres and a flask 1litre all gone. Ta for posting, this is deffinately for a weekend in fact will keep it for a Sunday less chance of any activity other than hillwalking!

That's a lot of weight to carry in liquids.

Good to see a couple of reports from you again (as in single day-ers!). Re: the explosives - I found an email contact for Blast Designs, he replied back saying they do not test at the weekend so all clear from that perspective. He also replied in as friendly a manner as you could hope for. Though that was sent 3 months ago, with an imminent walk in mind, and then came the March snow

Gordie12 wrote:That's a lot of weight to carry in liquids.

Just started carrying 3 litres and keep another 0.5 litre in the car as I find a get headaches easily from dehyration (I presume) and it seems to have done the trick. Ah I do the opposite now in terms of when to drink - I drink more at the start to relieve some of the weight in the pack as early as possible!

Makes sense to contact Blast Designs in advance (I'm impressed they responded to your email), I tend to assume that the weekends are safe - I'm still curious about what they actually do up there??

I think I'll start carrying a cool bag in the car for the rest of the summer so I can have a cold drink when I get back.

Gordie12 wrote:That's a lot of weight to carry in liquids.

I don't normally carry so much fluids but I remembered there are not many points of running water once your on the top and anyway the whole place is covered in sheep.

A couple of weeks ago, but I was really short on time -so ran 8 or 9km of the flats and left the good camera to save on weight- so not much report material as such. At the top at 8.30am to clear blue skies though. No report but a lot of great memories