Sgurr a' Mhaim without Kath

Sgurr a' Mhaim without Kath


This day was never going to be easy. Moira and I planned it weeks ago (and I arranged respite care for my mum to make it possible) but just ten days after our good friend Kath died in an accident walking in Torridon, part of me (as an expression of outrage at what had happened) did not want to set foot in the hills again. I knew of course this is not what Kath would have wanted so we stuck to our original plan to climb Sgurr a' Mhaim - and we climbed it for her.

This was Moira's first Munro since surgery to remove the metalwork from her ankle so we decided on a straight up and down from the car park at the Polldubh Falls. A faint path leaves the path by the river, branching off left and crossing a wet area to zigzag up to a gate in a deer fence. From this point on the path is unrelentingly steep pretty much all the way to the top. We knew the NW ridge would be a tough ascent (perhaps with hindsight not the easiest reintroduction to climbing a Munro!) but it was on the descent the zigzags seemed to go on for ever. 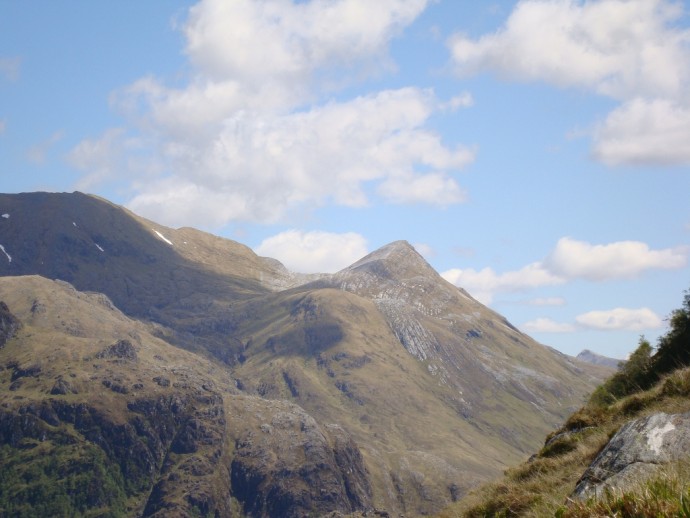 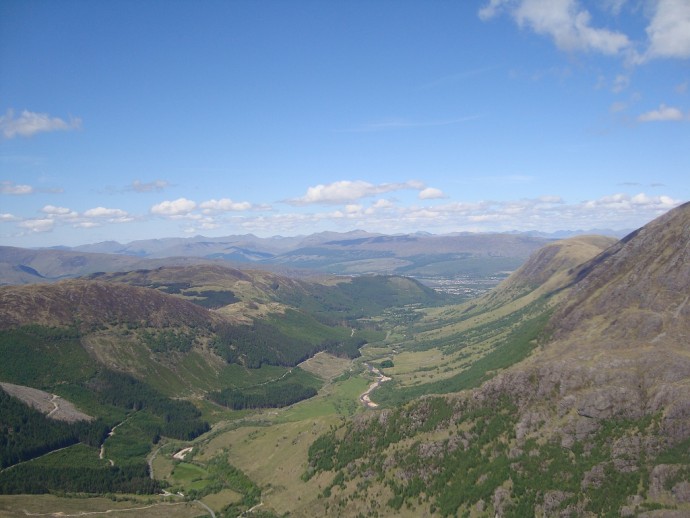 Path passes to the right of crags (Moira's pic) I had remembered from climbing Stob Ban there's a shortage of natural water on the Mamores so had taken extra water for the dogs. But it was so warm they were panting and finished their water half way up so Moira and I had to share our own water with them. I was concerned about this until we reached snow cornices and could fill a plastic box with snow to melt for them on the way down. The massive bulk of Ben Nevis Having a rest before we tackled the scree Keeping watch, the way dogs do There's a path through the scree, dry and dusty, but not too bad in ascent. Or maybe that's just me as I'm never so keen on moving gravel on the way down. At the top of the scree there's a cairn which briefly gave me hope we were at the top but we weren't.

The Ben again with that false hope cairn Start of the Ring of Steall It was here I very cautiously edged down to the cornice to fill Moira's sandwich box with snow to leave to melt for our return. Jack helped himself to snow and I threw snowballs to Tess which she chomped up so I was reasonably happy they weren't about to expire from heat stroke. It's always a worry with dogs whose only means of cooling is by panting. They did at one point find a muddy hollow to lie down in which also helped.

Me after collecting snow (Moira's pic) The final part of the ascent is a pleasant amble and there's no doubt about the summit cairn as it's massive! The views from the top are magnificent and make all the effort so worth it. An Gearanach and Stob Coire a' Chairn Fort William and the Ben In the distance we could see the Paps of Jura, but not visible to the camera. We stayed on the top about half an hour and thought about Kath (although in truth we thought about her all day) and prayed for all who love her.

Kath was a vibrant, funny, kind, multi-talented woman. On the 11 Munros, 2 Corbetts and numerous other walks I did with her, I never saw her in a bad mood - even when she mistakenly put two left boots in the car and cheerfully went on to climb Gairich wearing them! She was one in a million and I'm grateful to Walkhighlands because it was through this site I had the privilege of knowing her.

Jack in the bluebells on lower slopes of Sgurr a' Mhaim The dogs are getting on a bit and had done well in the heat so as a reward I took them for a swim in the Water of Nevis. When we got to the bridge we saw a group of young guys poised above the waterfall trying to pysche themselves up to jump in. One watching on the bridge explained to me the first jump of the year is always the hardest. I could well believe that and while I was there no one took the plunge. I walked upstream a bit to where it was safer but less exhilerating to have a dip and the dogs went in there. Not sure if it would have encouraged the jumpers to know dogs were swimming upstream of them but it's a free river and I felt the dogs were as entitled to it as anyone else and they'd earned it!

We went into Cafe Beag for cold drinks and homemade chicken and ham pie before starting the drive home. We thought with Rockness the road might be busy but it was so quiet we think everyone was already there. Arriving back in Inverness at 10.30 we got the tail end of a glorious sunset - a fitting end to an amazing and tough day. Paying a tribute is never easy, having lost my first wife when she was just a mere 43 yrs old

A beautiful day for you both and such a fitting tribute to Kath.
A great report on a great day

Paying a tribute is never easy, having lost my first wife when she was just a mere 43 yrs old

That was very hard to lose her so young. Life can be painful at times like these.

SusieThePensioner wrote:A beautiful day for you both and such a fitting tribute to Kath.
A great report on a great day

Thank you so much Susie - and yes, we were glad to see the snow!

What a lovely report and tribute. I read the report about Gairich with two left boots and thought at the time that Kath was amazing to do that! Most of us would just have gone home in a grump!

A fantastic way to pay tribute to a friend who's gone too early... And well done for reaching the summit in such heat, too. I remember descending this route after doing the Ring of Steel, it's a killer for knees.

I'm sure wherever Kath is now, she is smiling

That must have been a very sad walk for you both, but as you say it's what Kath would have wanted

Lovely photos, well done to Moira for walking all that distance after suffering a badly damaged ankle, hope it's completely healed now.

The 1st walk without Kath was always going to be the hardest,the rest will get easier but you will never forget her and she will always be there with you with every walk you take.

Lovely, thanks for sharing

A nice tribute; certainly made me stop and think - and well done Moira on her first after surgery - cheers

mrssanta wrote:What a lovely report and tribute. I read the report about Gairich with two left boots and thought at the time that Kath was amazing to do that! Most of us would just have gone home in a grump!

Kath didn't let little things like two left boots get her down.

BlackPanther wrote:A fantastic way to pay tribute to a friend who's gone too early... And well done for reaching the summit in such heat, too. I remember descending this route after doing the Ring of Steel, it's a killer for knees.

The knees coped not too badly. It was the big toe nails that took a bit of a bashing and Moira reckons she's going to lose hers. But it was worth it to get those views!

Lovely photos, well done to Moira for walking all that distance after suffering a badly damaged ankle, hope it's completely healed now.

Thanks Morag. Moira climbed 4 Munros in the past week and her ankle coped very well - which we're delighted about.