What a fantastic day for bagging a few fells last Saturday was ! The weather forecasters got it spot on with temperatures only reaching the mid teens but with winds only getting to circa 5mph which calculated as a welcome gentle breeze for the majority of the day with only a couple of spots where it was channelled between the peaks and felt a little stronger and cooler.

A little bird told me that the Iron "Persons" competition was being held through central Lakeland so after Damson & I had picked up John in Barrow we headed off down the west coast, over Corney Fell, through Cleator Moor and on round the edges of Loweswater to park at the base of Whiteside and Grasmoor on the B5289 at Lanthwaite Green Farm, north of Buttermere Village.

It was just before 10 as we crossed the road and over the new bridge crossing Liza Beck already feeling the heat from a sun that had shown its face since very early morning.
We slipped up straight away and took a path (the only one we could see at the time) that ran up the left hand side of the beck and over a number of large rocks before realizing our mistake. We decided the easiest way to recover from this was to scramble over the slate shale to our left up a steep bank and pick up the true path. At this point John's foot slipped on the rocks and split the seam of his trousers initially causing a small hole which would get progressively worse over the course of the day.

We recovered quickly and started the first of three sections that make up the western flanks of Whiteside, initially onto the summit of Whin Benn before taking a clear path over two other knuckles and up the left hand side of Gasgale Crags. After Johns completion of the Keswick to Barrow 40 mile walk a couple of weeks back and my return to the fells over the last week, we took our time on the ascent stopping to take in the fabulous views of Crummock Water, Gasgale Gill, Melbreak and the ever increasing views of the Whiteside ridge across to Hopegill Head.

Crummock Water & Loweswater Valley from base of Whin Benn 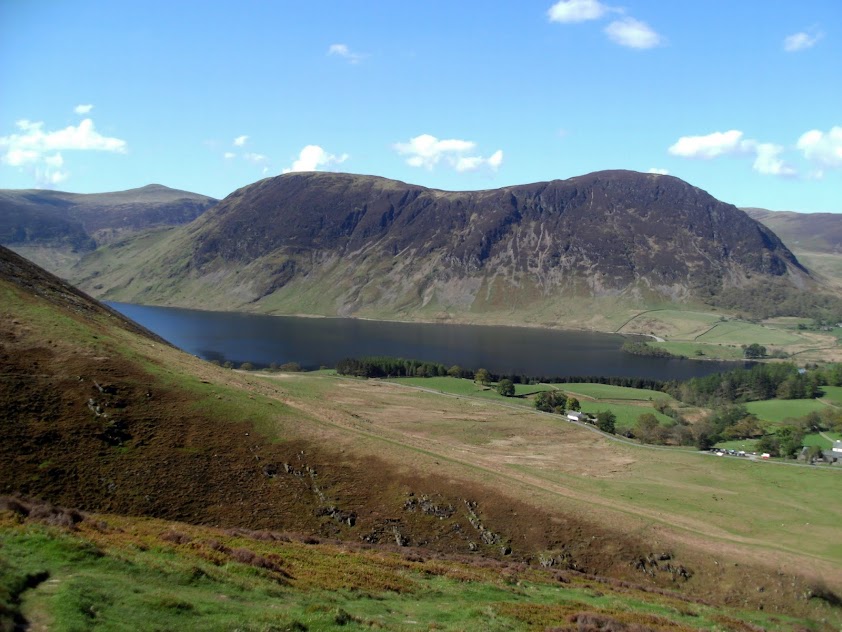 Mellbreak from ascent of Whiteside 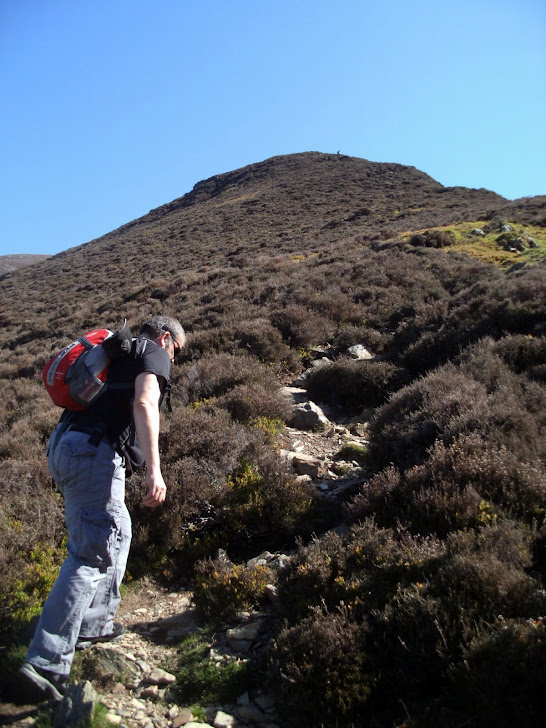 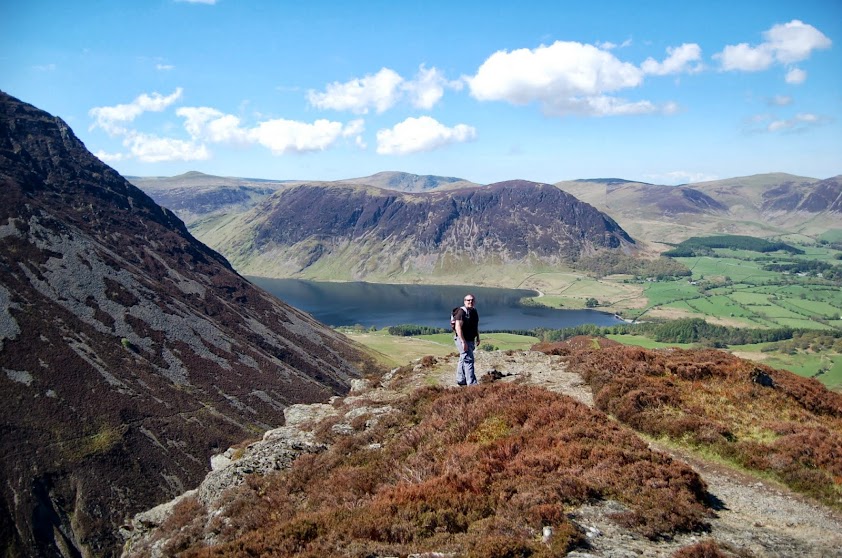 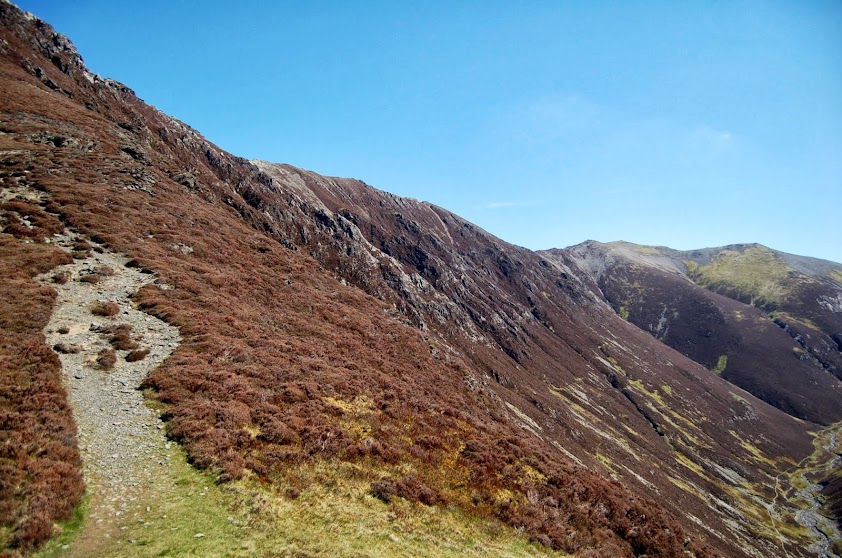 Whiteside to Hopegill Head ridge from half way up Whiteside

Numerous breaks were taken on the steep ascent which included a couple of sections of airy scrambling towards the two false summits before we broke out onto the broader expanse just below Whiteside summit. A quick drink on the top and a pause to take in a few piccies of our 200th Wainwright and we were on our way onto one of Wainwrights favourite miles in the district. 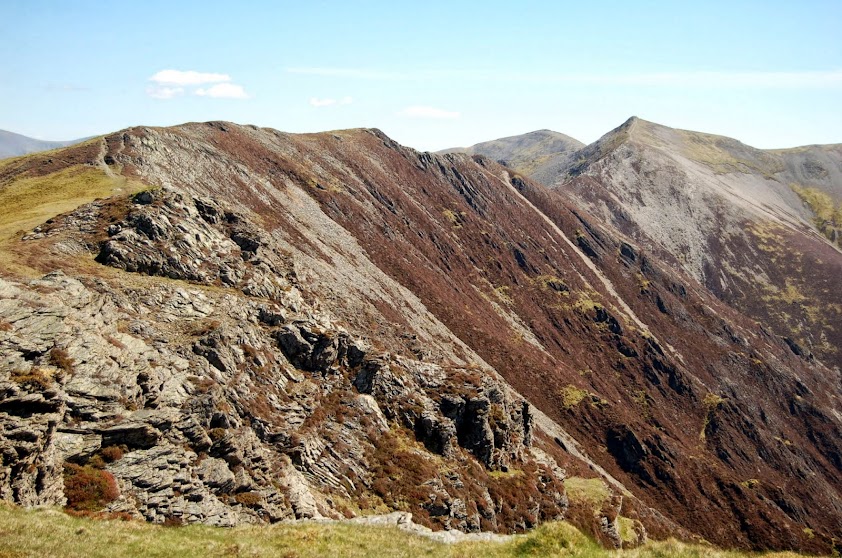 View along ridge to Hopegill Head from Whiteside 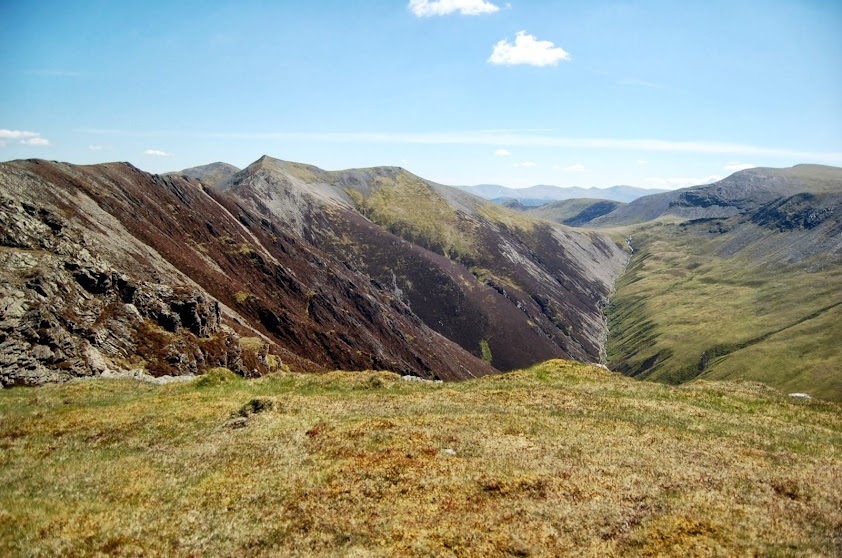 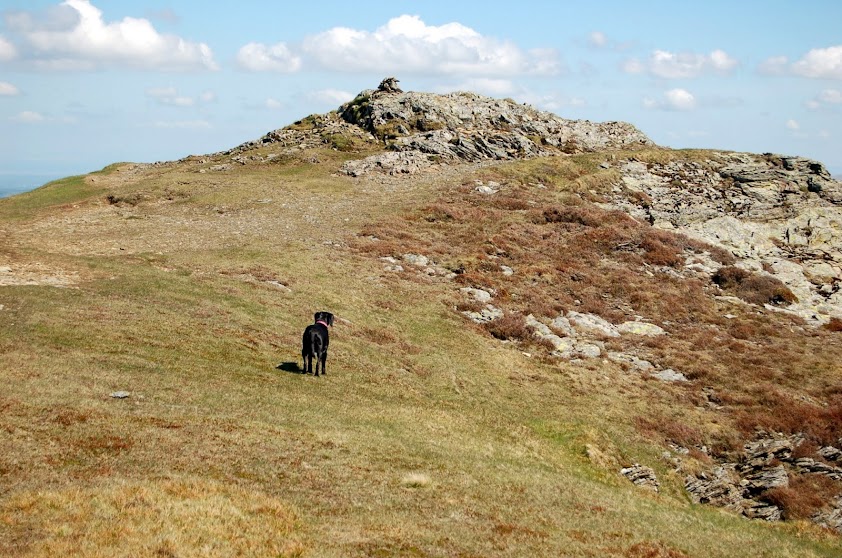 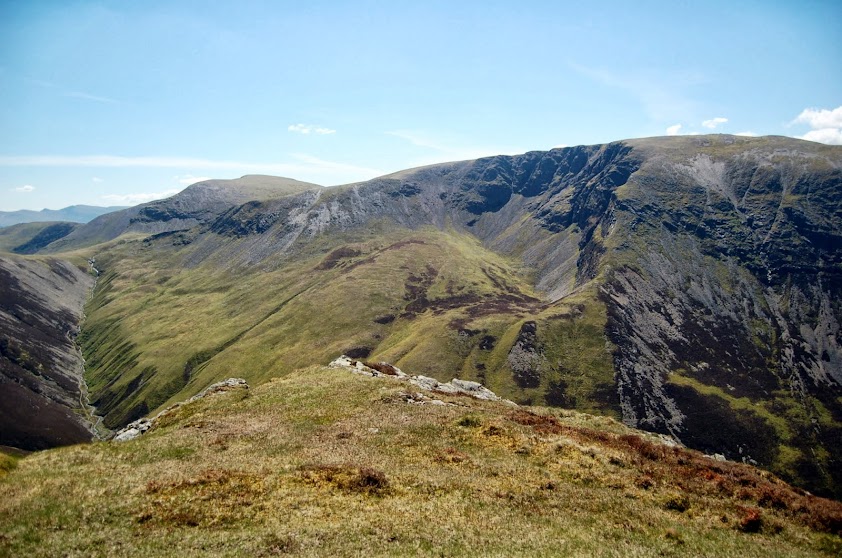 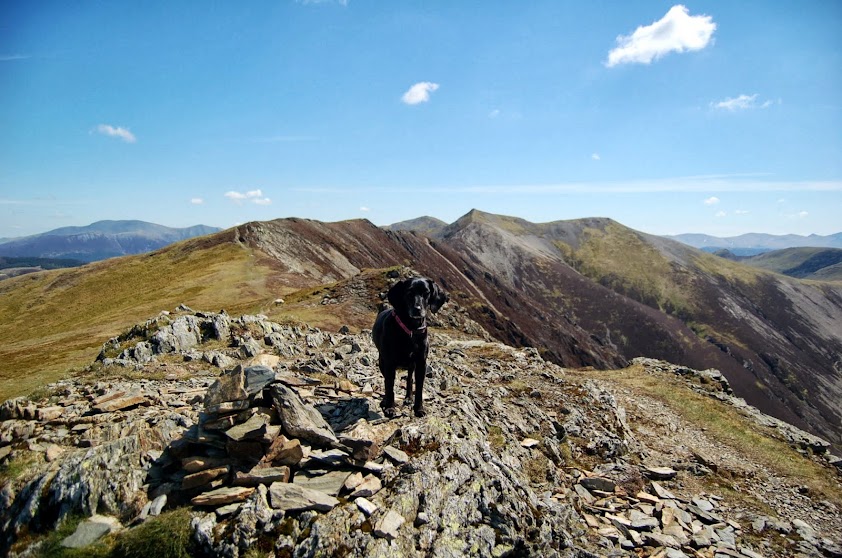 Damson on Whiteside summit (Our 200th) 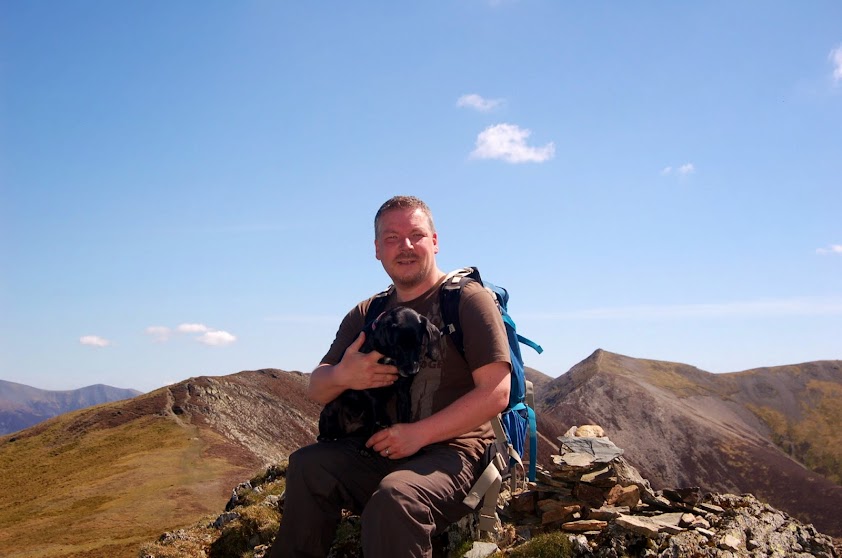 Blinded by the sun on Whiteside 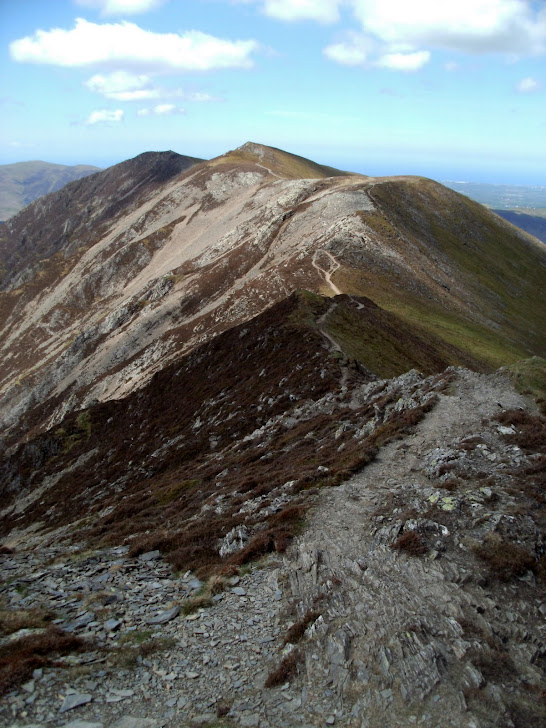 Looking along ridge to Hopegill Head from Whiteside 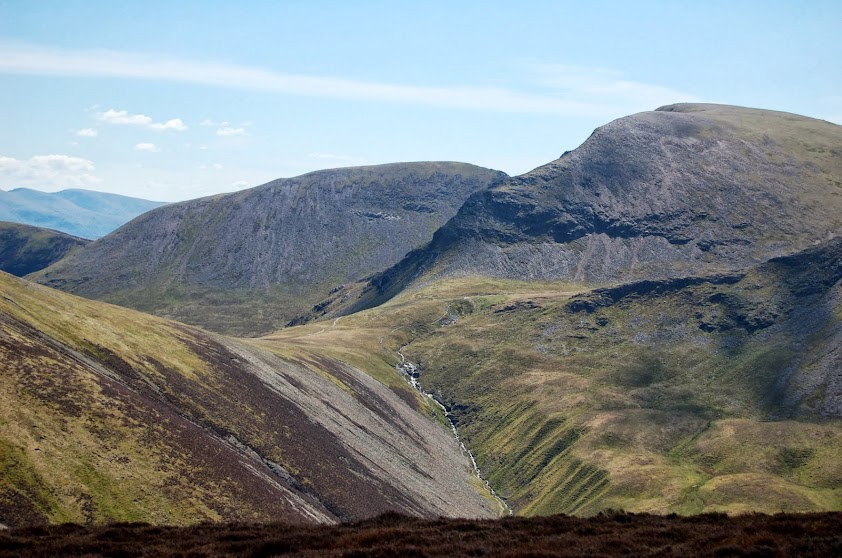 The gentle breeze was very welcome as we crossed the traverse of the ridge towards Hopegill Head. Views in all directions were splendid and varied, looking out to the Isle of Man and Scotland to the left over Lorton Vale and Ladyside Pike, the rocky walls of Dove Crags facing off the mighty Grasmoor to our right over the depths of Gasgale and onwards towards the splendours of the North Western Fells of Hopegill Head, Grisedale Pike, Crag Hill, Sail & Causey Pike. The final push onto Hopegill Head was hardly felt. 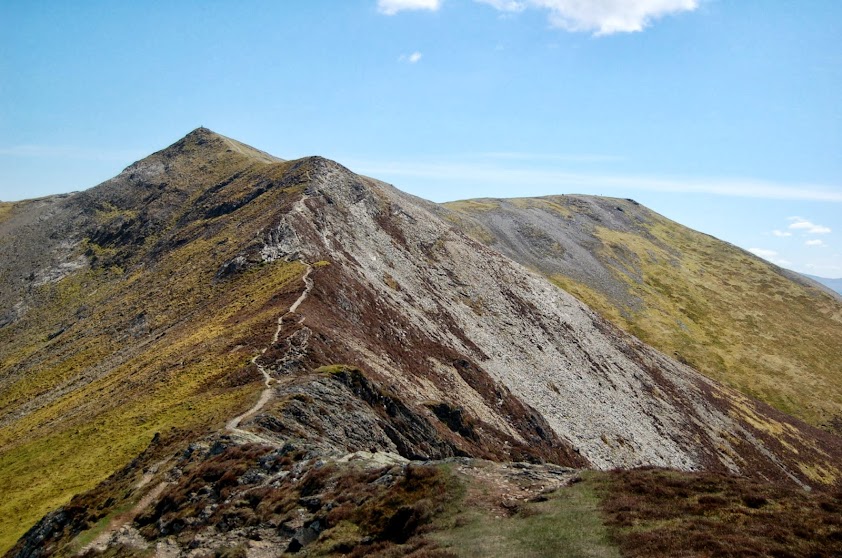 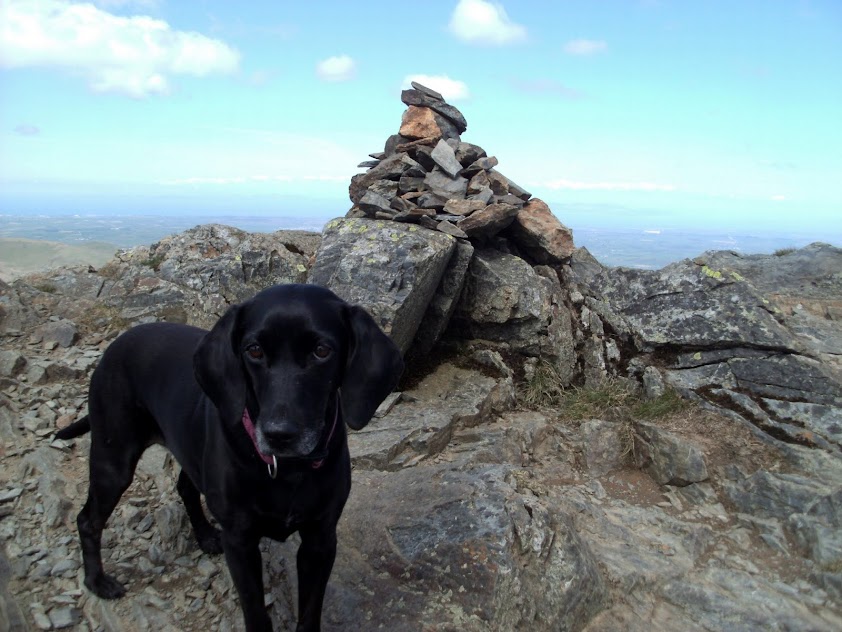 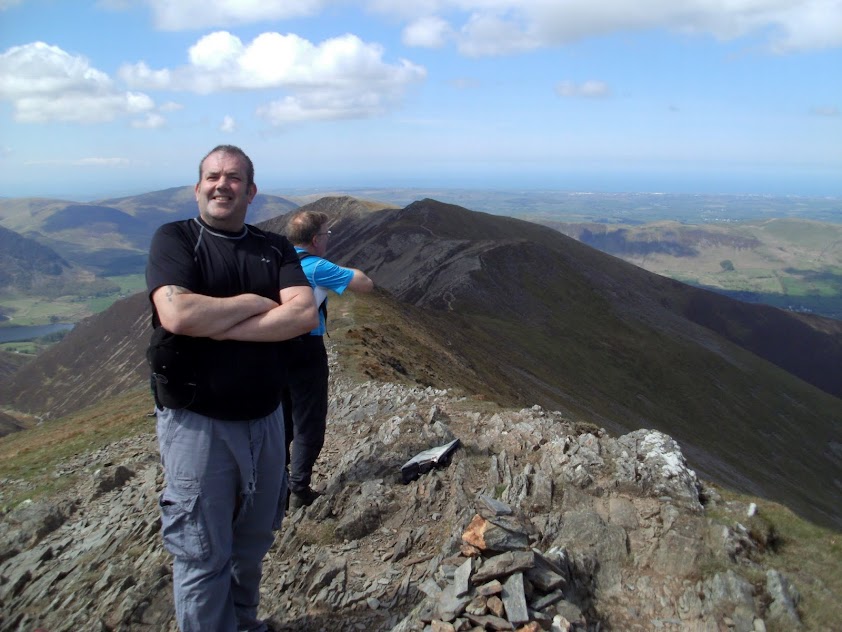 A decision to leave Grisedale Pike for another day (for John anyway as Damson & I completed it in a large round last year) saw us hook right over the broad Sand Hill before descending onto Coledale Hause down a steepish shaley path towards the foot of Eel Crag where we grabbed a quick bite to eat before the plod up between Crag Hill & Grasmoor. At this point John was struggling to keep any kind of control over his runaway trouser split and ended up using some tape out of my First Aid Kit to strap the material to his legs.

From the 4 way crossroads at the top of this stretch we briefly turned left on the path towards Crag Hill before taking a fork right across the edge of Addocomb Hole and onto the summit of Wandope.
More imporessive views across Ard Crags and Knott Rigg towards Robinson, Hindscarth & Dale Head were taken from the craggy top before we started our descent down the southern side of Grasmoor over Whiteless Edge. 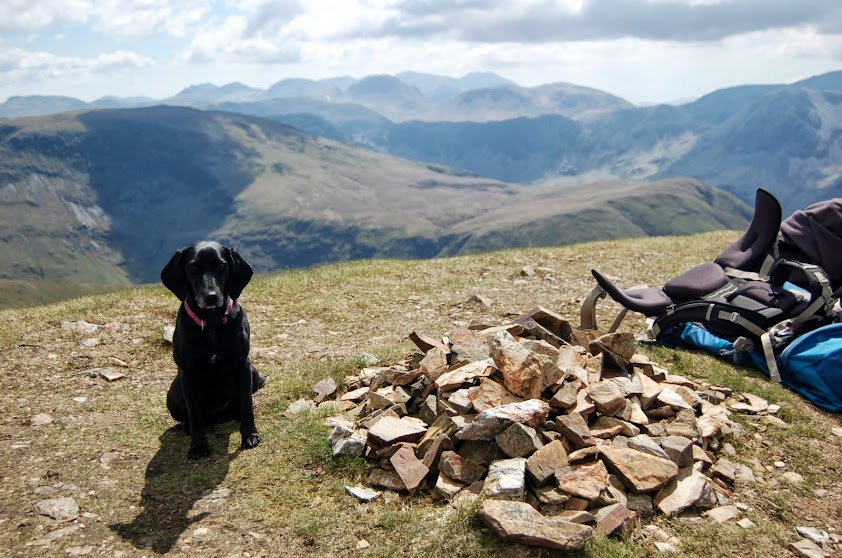 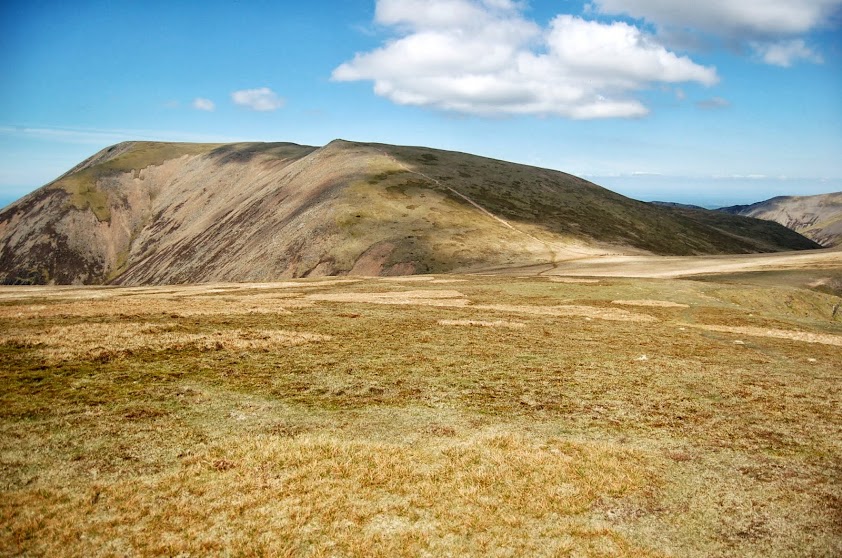 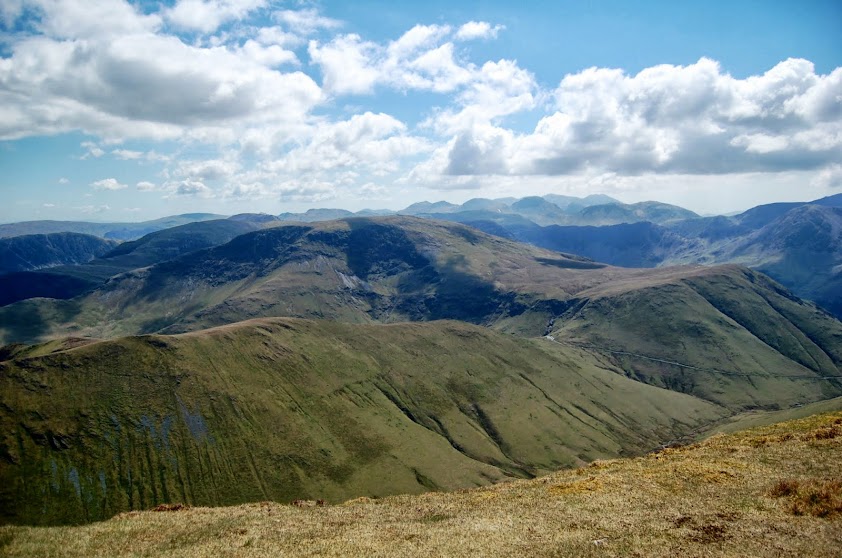 View to Robinson from Wandope 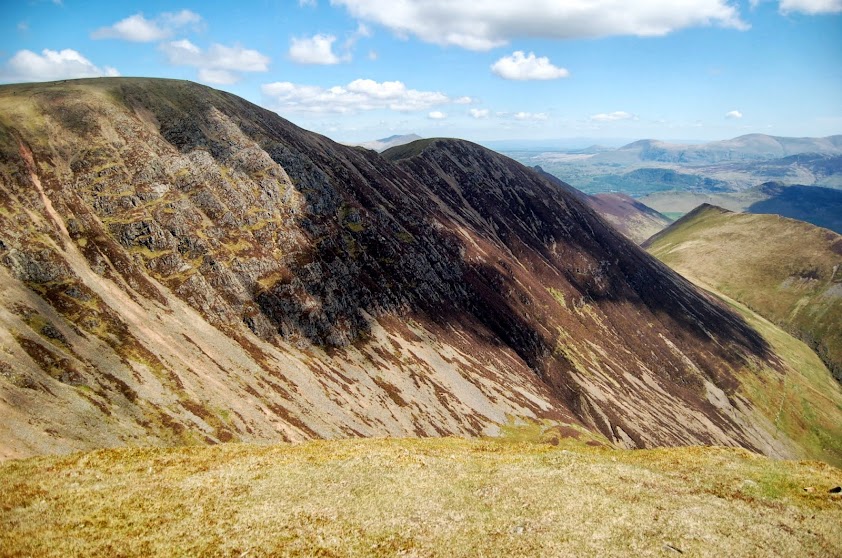 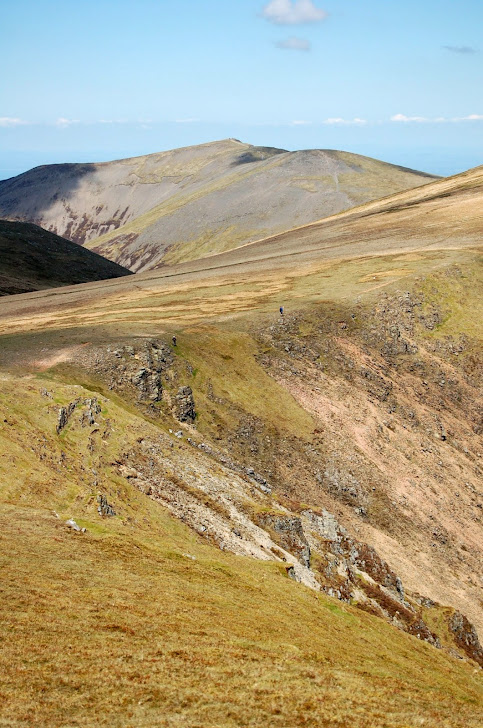 View back to Hopegill Head past Crag Hill from Wandope 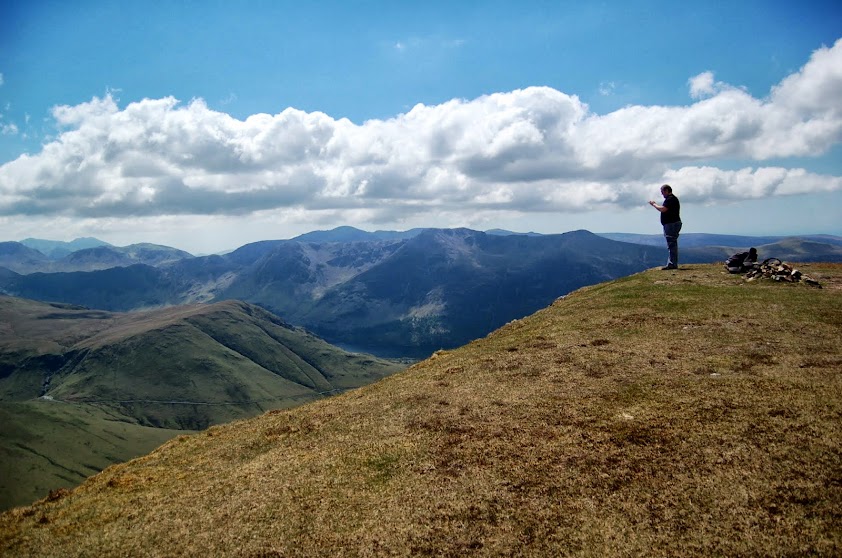 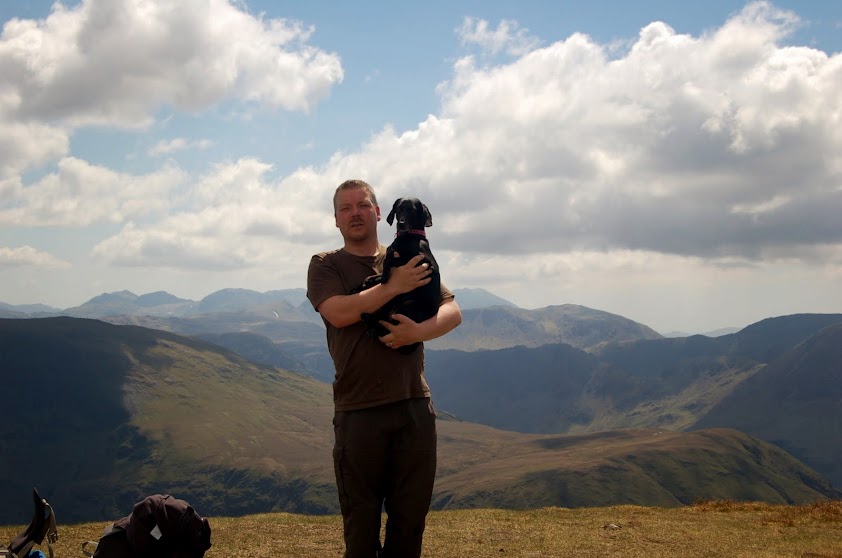 Our 201st Wainwright was actually a descent from Wandope down Whiteless Edge before hopping on to the summit rocks themselves for a brief photo stop before pushing on over the top and down the steep banks onto Whiteless Breast (a rather flatter expanse of green). 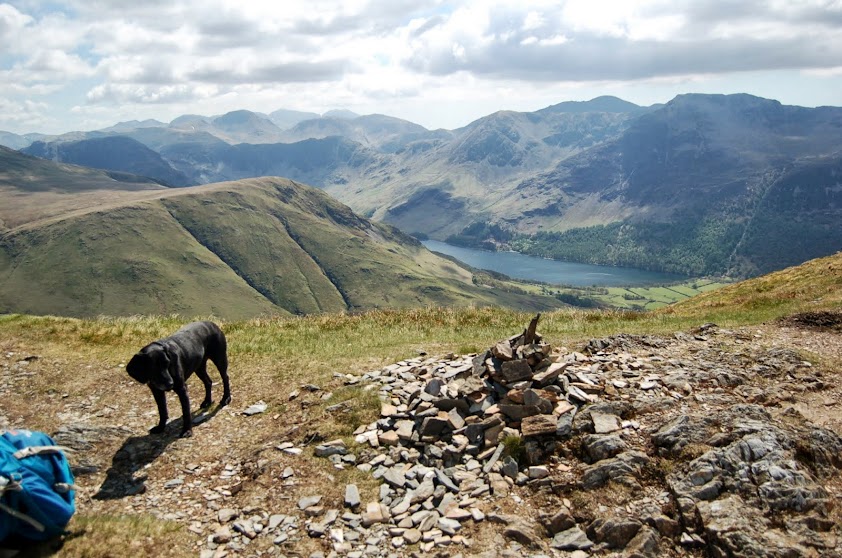 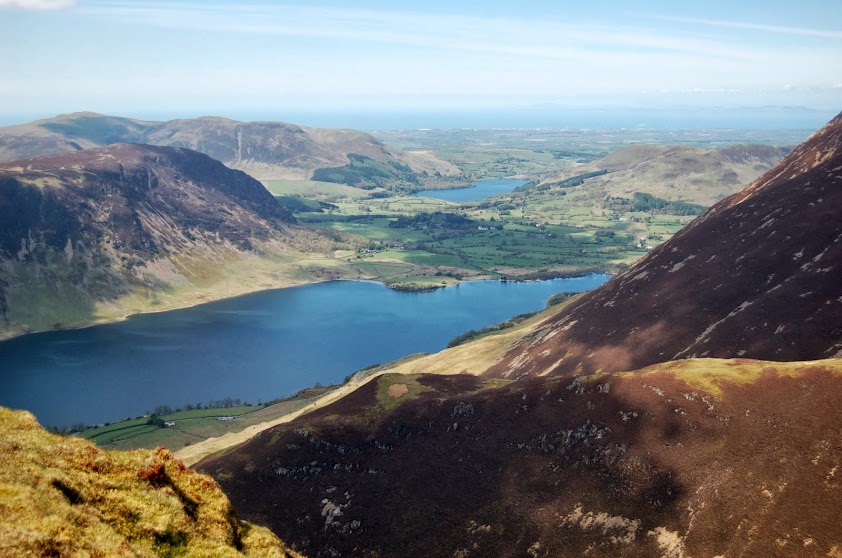 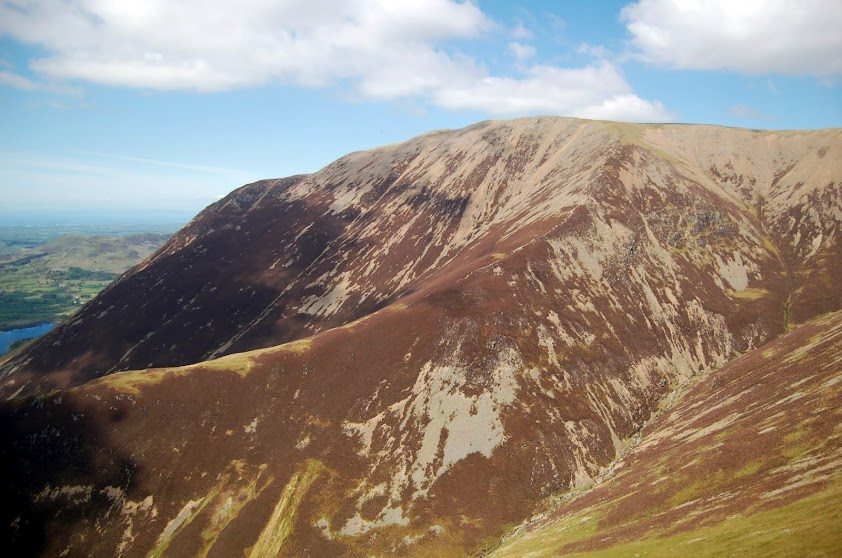 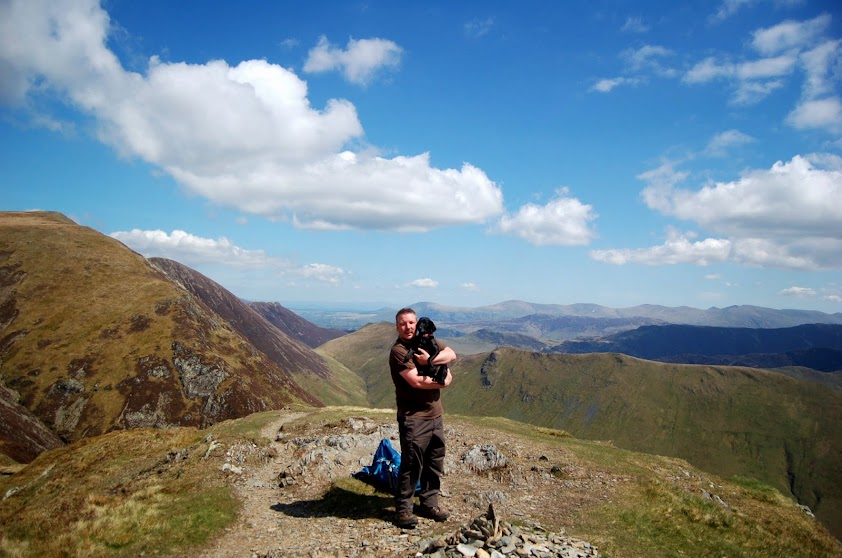 Damson & I on Whiteless Pike summit

We pushed on round Rowantree Beck towards the village of Buttermere overlooking hoardes of people who seemed to be gathering at the eastern end of Rannerdale Knotts. We joined them briefly before heading right down Squat Beck and back towards the car. (I have made a decision to leave Rannerdale Knotts to the very end of my Wainwright list due to family and friends requests to join me on the final trek and most of them claiming they would be incapable of doing anything significantly higher. At least I now know how difficult it will be to carry a full champagne lunch up these paths from Buttermere in a few weeks time).

I had heard of the bluebell fields behind Rannerdale and today got to see their splendour as we dropped down Squat Beck and over the little footbridge at Dale How. The path down High Rannerdale was incredibly popular in the early afternoon sunshine with good cause and groups of people were out with dogs or sunbathing along the entire stretch to the car park at Cinderdale Common. 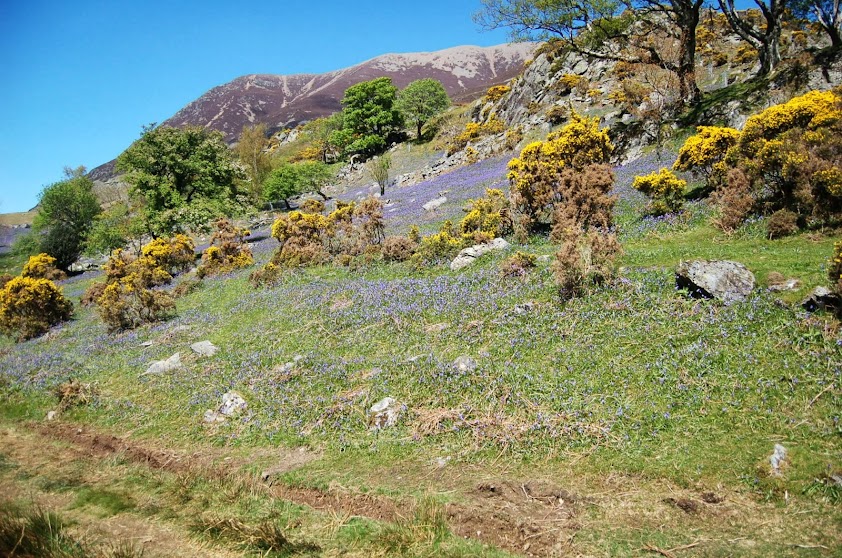 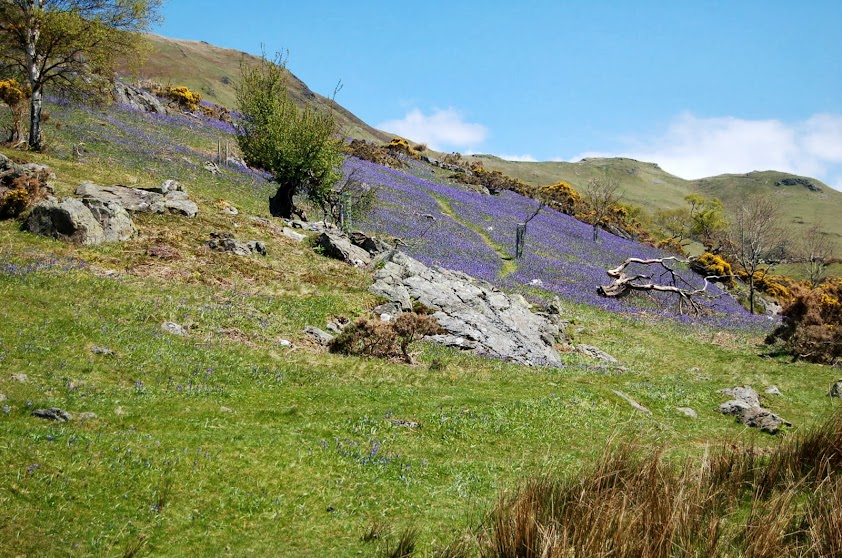 The bluebell fields of Rannerdale 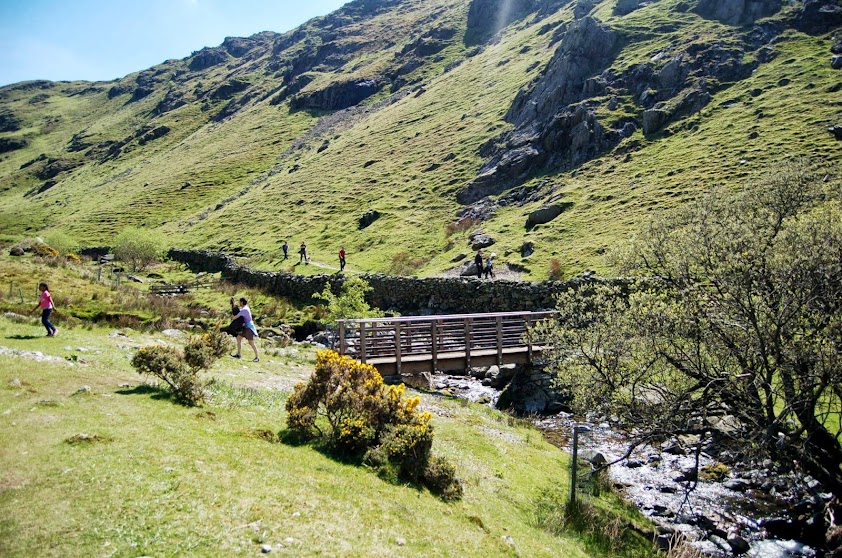 We still had a good 1.5 km left before getting back to the car following a small grassy track alongside the B5289 up the length of Crummock Water.
On returning to the car I still had one moment of entertainment outstanding. My wife Ellie had been using the car for her wedding dressing business and had left a number of safety pins in the car which I recommended that John should fasten together his trousers with. After sitting in the passenger seat he attempted this and directly stuck a pin into his inner thigh.
It took me a good 5 minutes to stop howling, a really good belly laugh which did nothing to calm down John who hopped around the car shouting suitably adequate words which made the howling worse.

This walk had the lot today and in glorious sunshine too with great company. I've got quite a red shine and slightly burnt shoulders due to the lack of hat or sun block.
13 left to go and they are going to have to be pretty spectacular to beat our walk today.

What a fabulous day for walking! A great report and some wonderful photos, Craig

Congratulations on reaching the 200

The bluebells weren't out much when I was in Keswick but, Rannerdale always gets a visit each year

Really enjoyed that report Phooooey, great to see all the views we missed. We do still have to do Whiteside and Hopegill Head so I reckon Grasmoor might well get lumped in with those two so we get to see the views.

johnkaysleftleg wrote:Really enjoyed that report Phooooey, great to see all the views we missed. We do still have to do Whiteside and Hopegill Head so I reckon Grasmoor might well get lumped in with those two so we get to see the views.

Saw your report as well - I'm planning Whiteside - Hopegill Head - Eel Crags - Grasmoor then down Lads Hows in the near future. I was hoping you'd have some views across to Gasgale Crags (big incentive for the route from the photo's I've seen) but it looks like the weather was against you.

Great report Phooooey you picked a great day and the pics are good too. Congrats on number 200. I finished last weekend on Rannerdale Knotts. The path up from Buttermere village is straightforward (the other half did it no bother!). It took less than an hour with stops. Hope you have a great day, we did! Cheers Dave