our_route.gpx Open full screen  NB: Walkhighlands is not responsible for the accuracy of gpx files in users posts
We were looking for an easy winter walk so we chose Ben Venue, the route looked easy, ascent only 820m. Perfect, we set off to arrive before 10am; got the last parking space at the Lay bay/start point, found out later all the other cars were the fishermen on the shore.
We got kitted up, just above freezing, clear sky and no wind, off we set (a quick dash back to the car as Susan forgot her poles). The goings is easy, down the farm road and across the Ledard burn by bridge, and then follow the path all the way up until you leave the forest and cross the burn again. The bog factor hadn’t read the walking highlands key, from 100m ascent it got slowly worse, until you were walking in ankle deep mud, which was not a problem as there are plenty of streams to keep cleaning your boots. 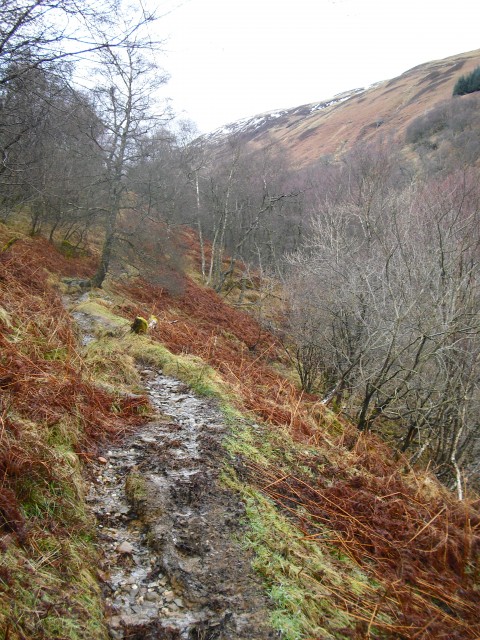 After crossing the stream on a makeshift gang plank affair, we had a coffee stop at the style, we had been making good time, so enjoyed the views, wild goats, over a hundred deer grazing nearby. Spent too long, hind sight is great. 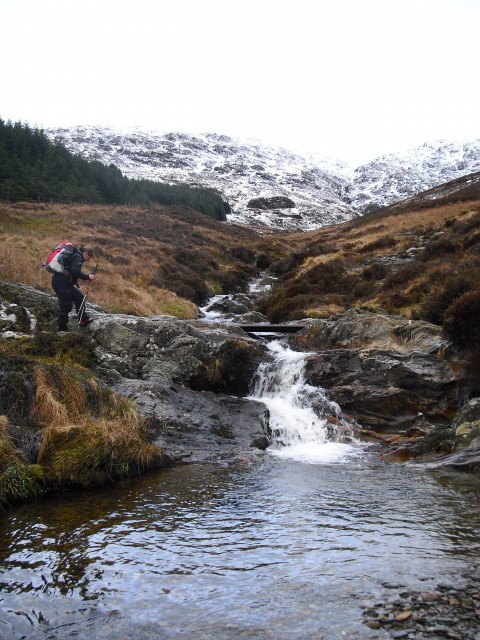 Metal poles to cross the burn

Once over the style, we followed the well defined path, which now was a stream, at least out of the bog factor. Around 350m patches of snow appeared, another 50m ascent it was then all snow, solid or turned to ice. We followed the path for another 500m until it wasn’t visible. 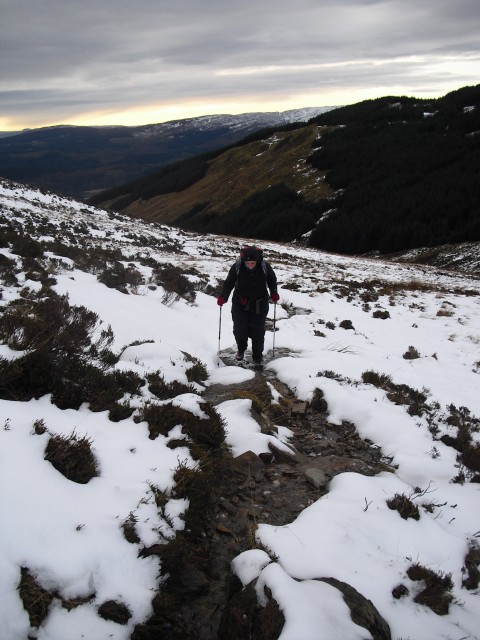 The snow started to appear 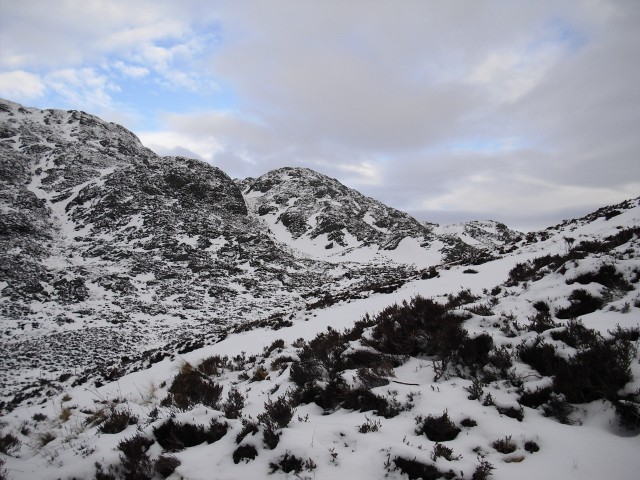 Let the fun begin, the snow had drifted, with a solid crust for a few steps then the game of how many steps until I sink. Tried to climb higher to see if it was more stable but it was just the same. So headed for the fence and style at the base of Beinn Bhreac.
From there we could make out the outline of the path, by now we had realised no one was in front of us, and probably had not been this way for days. The path route descends slightly, didn’t make it any easier, legs and knees were starting to feel the effort. We came off the path and headed straight up to the Bealach, kicking in steps all the way up. Getting our first view of what we still had to climb, quick few pictures and off we headed to the cairn. Going up the Bealach On reaching the cairn we were faced with a very steep and icy ascent, ice axes out and off we went, still able to kick steps didn’t bother with crampons, and this was to be an easy walk. It took so long to reach halfway up we rested on a crag and checked our time, we were now at our safe turn round time, we could see snow clouds in the distance, 1km walk another 80m ascent, so close but we decided to descend to the cairn and call it a day. I had been kicking steps for 2km, and was now concerned about being able to stand if we continued. So quick descent, had lunch, and then took Susan on Self arrest practice, for someone who says she’s scared she had the biggest smiles on her face when she was able to stop quicker and quicker. We packed up and decided to follow the path back rather than descend the gully we climbed up. 20m later and a cry from Susan, she had broken through the snow and was sinking in a bog! She crawled out and we quickly changed her into dry clothes. Me trying not to laugh as the smell was horrendous. After jumping around (hope now one saw us) she soon warmed up and off we headed.
Another wrong move, the path was worse than anything, we climbed down and after 400m the drifts were so steep I had to start cutting steps to continue, for 80m I cut at the ice and snow until we were able to just kick steps again. It was now getting darker with the clouds and we had an hour to get off before dark, back on our trail we made good time with only a few falls.
A very long day and more effort than climbing Ben Ime weeks before, but by now we were back to our happy self’s with the end in sight. My knee still hasn’t recovered so this week we are not going above 300m, as usual great time had by all. Amazing the difference that snow and ice makes to many hills.So much harder than you expect.
Nice pics and report,hope you got the smell out of Susans bog drenched clothes.

Tell Susan I feel her pain I did the exact same thing on Beinn Ime on Sunday and now have bog-juice crusted on the insides of my brand new boots!!

Shona wrote:Tell Susan I feel her pain I did the exact same thing on Beinn Ime on Sunday and now have bog-juice crusted on the insides of my brand new boots!!

Her boots werent so bad, just gave them a wipe round the top, must have been some vacum stopping the ingress of water

David.Ferguson wrote:Amazing the difference that snow and ice makes to many hills.So much harder than you expect.
Nice pics and report,hope you got the smell out of Susans bog drenched clothes.

Yeah had enough of snow now, dont mind sinking for a bit but after a few km it gets on your nerves. Gave all the clothes a good scrub now so should be ok thanks

Rather than kicking steps for miles perhaps it would have been easier to put crampons on?

Only had to kick into the snow realy on ascents, the rest of the time I was kickiing into the snow not for the security of grip as the boots were gripping the hard crusted snow easily, but more to break the surface were it wasnt strong enough to take my bulk, trying to avoid the jarring sudden slumps. We had the crampons with us and the part where we had to cut steps with the ice ave was at a 70 to 80 degree angle so even with crampons going along the side of this slope I would have cut steps for the ease of mind.
What would have been easier was doing it in the summer

But it was worth it, a great workout, and perfect views