This route started at 7 am for the Cairn Gorm Ski Centre with no real start and finish plan other than to see where the compass leads. I did not fancy the trek up the Coire Cas with the manmade structures so aimed for the west path toward the Lairig Ghru. The ascent was gradual and offered grand views across the cliffs of Cairn Lochan and over toward Braeraich.
The attachment cairngormsjune142013 006 (800x490).jpg is no longer available Along path up to plateau

Over the intermediate top 1083m at 0800 then a stroll along the wide plateau following the obvious path leading up toward Ben MacDui. Sourced a stone which looked like it belonged to the film set of the hobbit or lord of the rings. A procession of cairns serves as a physical guide to the top.

On the summit at 0900 I was alone. I soaked up the silence and enjoyed the surrounding views. The second highest munro at 1309m was adorned with a grand cairn and trig point, the worn identification plate and the numerous wind shelters. I took some photos and ate a nutrabar before heading in a SW direction. After about 1km I descended very steep boulder terrain down to Clach nan Tailear then along the south ridge leading up to the summit of Carn a Mhalm 1037m. The prominent ridge provided great views of the adjacent big boys , Brearaich, Angels Peak, Carn Toul and the Devils point which looked so different from this perspective in contrast to the experience of walking them last week.
The final ridge section led to the summit cairn at 1040. And the view across to Devils point brought back the recent memories. Ben MacDui down to Carn a Mhalm Across lairig Ghru to Devils Point Over to Big Boys, Carn toul, Angels Peak and Braeraich

I decided to get back up on to the Ben MacDui ridge and see how things were from there. It was a steep climb back over dry boulders and really stretched the calf muscles. Once back up there I wandered over to the cliff edge to have a look across to Derry Cairngorm 1155m. I checked the map and decided to head down toward loch Etchachan and see how the legs were. After a nice cooling stride over some residual snow I took a bearing from 009997 toward DC and set off. An engine noise shattered the silence. It turned out to be a helicopter flying across the face of the cliffs of Coire Sputan Dearg. A quick glance to confirm that it was not the rescue team, then it was onwards. A sound path led up another boulder strewn ridge to a nice cairn on top of large boulders with another cairn further on. 1300. CD across to BM and CG

Cloud added a contrasting grey to the land scape and it was clear to see why the Gorms are unique. In adverse weather or poor visibility it would be easy to get lost here in this vast tundra.
I took a bearing and headed back toward Loch Etchachan to have some lunch. Etchachan with Cairn Gorm in distance

Sitting there I noticed the large sections of ice/snow sitting in the water in June. Mini icebergs in June!!! I decided to climb up onto Beinn Mheadhoin 1182m and head over to the saddle for the final leg. The ascent was steep but eased near the top. Back across to BMD from BM Ridge

The walk over to the first rock formation on the intermediate top at 1163 was pleasant. Then the views of the tor rock formations opened up. Odd shapes on such an exposed landscape, would make a good film setting. At the summit there was a large tor which was easily scrambled from the North. On the summit the views were immense. 1440.

Back across to CMD 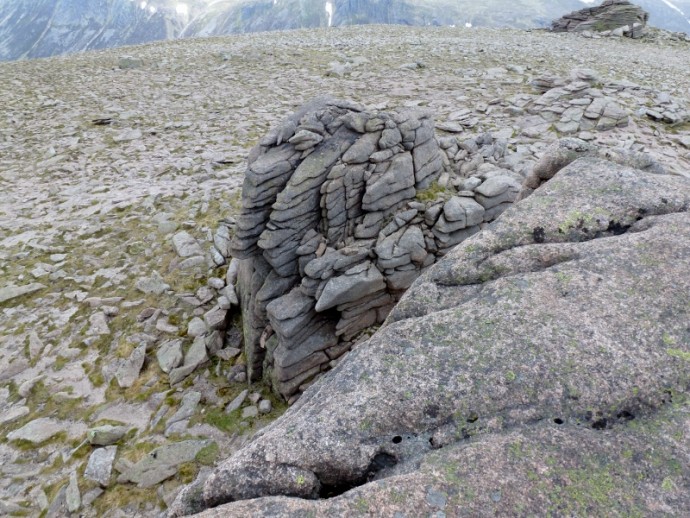 I took some shelter behind another stone formation and refuelled. The next leg involved descending to the loch Avon shores and the stalkers path. This involved donating a large amount of height but it had to be done. I took a precautionary bearing from the summit even although there was good visibility. It turned out that there was a very steep cliff section on the NW side of Creag Dubh. The final descent was steep and led to the outflow from the loch. What an idyllic landscape with magnificent surroundings. Loch Avon and Pass up to Cairn Gorm Back along Loch Avon

Easy to appreciate why there could be a lot of avalanches in this area. The water was deep so it was time to remove the boots and waddle across.
On the other side a path meanders up to the saddle. With extra time I might have pushed on up to Bynack More but I still had a big pull up to Cairn Gorm 1245m and it was club championship golf the next day and wanted to be able to walk round. The climb up the south face of CG was steep and again I thought that this must be high avalanche risk in winter. Sometime later the large stone was reached at the upper section in time to see a couple of ptarmigans, how appropriate considering the restaurant was just beneath the summit. The cairn was very splendid and was reached at 1700. Again there was a lovely symmetrical line of smaller cairns on the summit to aid visibility. The small weather station made a mechanical noise as the anemometers disappeared inside the metal casing. I soaked up the views before following the brick road down to the restaurant which was closed. Sad as I had hoped to get a glimpse of the funicular train as a former train driver. I continued down the coire cas and passed some 8 foot sections of snow. Deep snow on side of road

As I neared the base I saw a collection of snow blowers, T40 (terminators!!) that was a first for me. This equipment looked new and very expensive. I returned safely to the car park at 1745 just in time to see the local bus (number 31) which runs from Aviemore. Nice one if you wish to travel by public transport to get in and out of these magnificent mountains.
A grand day in the Gorms. Back along to BMD and Braeraich

that was an enormous walk, you describe it like it was a wee stroll in the park!

A fantastic walk, you had good conditions for it.

Big hills and a great walk to match!

mrssanta wrote:that was an enormous walk, you describe it like it was a wee stroll in the park!

Thanks, but my feet would tell a different story..

gyles wrote:A fantastic walk, you had good conditions for it.

Thanks Gyles, it was a good dry day and the cloud just sat high enough to maintain good visibility.

Driftwood wrote:Big hills and a great walk to match!

Wow the ice and snow in mid June...crazy! But not surprisingly after the winter we had.
That sounded like a great walk!!

Mountainlove wrote:Wow the ice and snow in mid June...crazy! But not surprisingly after the winter we had.
That sounded like a great walk!!

Thanks Mountainlove, it was a sound walk and it was a first for me to see icebergs..OK they might not have sunk the titanic...but they were grand for June!!!