We decided to the white mounth walk with a twist. Starting off at Glen Doll on Saturday night we trekked it up to Bachnagair and set up a wild camp for the night. The sun didnt set until well after 2330hrs and the temperature didn't drop too low during the night.

We had an early start in the morning at 0530hrs, after a light breakfast we broke camp at 0700hrs to start the walk. The weather was a little bit overcast and the wind picked up above 600mtrs. It took twenty five minutes to reach the sheep/deer shed and pen. the track was very well defined and easy to follow. We did Broad Cairn a few years back in the winter so it was nice to do it on the track with no snow. we hit the summit of Broad Cairn after an hours walking and the wind really started to pick up.

Onwards to Cairn Bannoch
Another one that we did in Winter a while back. This time round the wind we had a serious cross wind which was compounded by the large packs we were carrying.

Carn an T-Sagairt Mor
We hadn't done this before and it did seem a bit of a let down as it is quite flat on the top with two cairns. there was however a great surprise at the north cairn. about 60-100 meters NE of the cairn was the remains of a downed aircraft. I thought it was a Canberra. on our way down we spotted some further wreckage which looks like it had been blow by the severe winds over time.

Carn a' Choire Bhoidheach
There were a few snow field left on the way up to this summit particularly on the WSW side. we followed the track up The Stuic and turned right to reach the summit. on coming back down we stopped to look at the cracking views of Loch nan eun.

up to Lochnagar
The wind really started to pick up on our way to Lochnagar with gusts upto 70mph according to the mountain forecast. we managed to get some good views of the Pinnacle but it was too dangerous to get to close to the edges with the wind.

The long walk home
the walk down from Lochnagar to Loch Muick was on a well defined path the upper section had large stone steps. the wind had dropped significantly by the time we reached the falls of Glasalt, by this time I was sure I had a couple of blisters on my feet. we stopped off on the shores of loch Muick to get an energy boost and check on the state of my feet by this point we had done about 27k.
we then proceeded up the side of Corrie Chash back to the old shed. from this point we knew we were on the home straight and tired to pick up the pace to get home (despite the blisters).

Summary
An epic walk from Glen Doll with a fun bit of wild camping too boot. We didn't have the lightest of gear with packs of over 40lbs but it was well worth the experience. 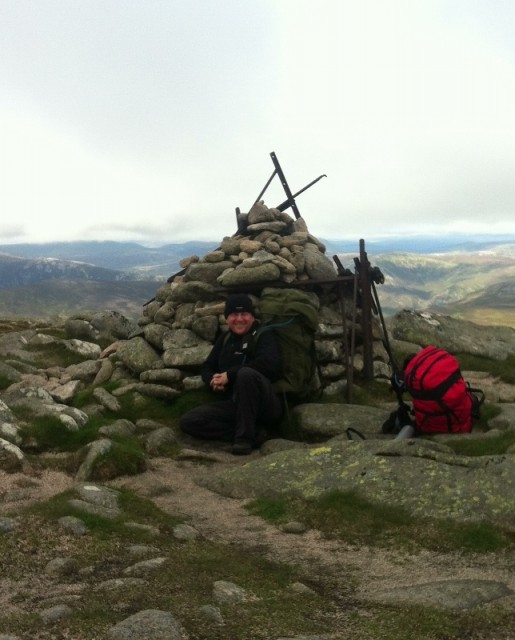 White Mounth Walk.gpx Open full screen  NB: Walkhighlands is not responsible for the accuracy of gpx files in users posts