The snout without views

The snout without views


This walk was a late decision, after checking the weather and mountain forecasts for that and the next few days. I'd ruled out a longer Cairngorms route, or anything with views I wouldn't want to miss (such as Sgor Gaoith), but this looked like a fairly quick and easy route. From the map, An Socach has quite a defined shape that looked like it should be easier to navigate if, as seemed likely, the clouds were down over the tops.

I arrived via the Glenshee pass, stopping briefly to verify the cloud level (down around Carn Aosda's shoulders) and that there was a blustery wind from the southwest. That wasn't ideal, but An Socach should hopefully have some shelter from the higher Munros to its west, while there was a fairly clear escape route east to join the track back down the glen. 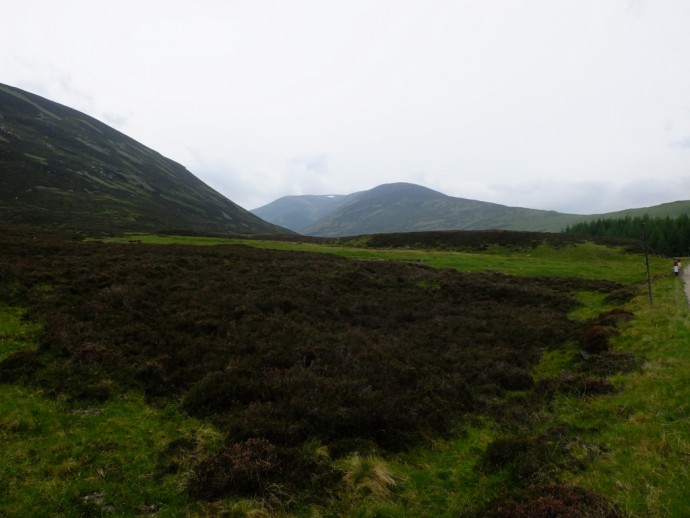 I parked near a bridge over Allt a Mhaide, though the track shown on my map was blocked by a gate, leaving a few minutes' walk back alongside the road. I turned west onto a track, soon reaching a noticeboard with estate information. Then through a couple of gates and along a vehicle track, passing a group of inquisitive ponies. I met a small group near Baddoch, heading in the opposite direction back down the glen. Maybe wisely, I thought to myself when a brief sprinkly shower began.

I crossed the Baddoch Burn on a small footbridge, but rejoined the track when that made its own crossing. I started uphill sooner than I should have for the path, so made my own rising traverse of the northern side of Coire Fhearneasg. I soon met the cloud, which seemed to be down to roughly 800 metres, with more light showery spells, hence the lack of photos from this stage.

I could see the steep northeastern flank of Socach Mor before the cloud concealed it, so approached around the side of the unnamed 855 metre top to its north. That brought traces of a path, though I relied on my map, compass and the shape of the hill to reach the cairned top of Socach Mor. Finding and following the ridge seemed the best way to reach An Socach itself, if I was going to continue.

After a snack in the shelter of the cairn, I headed southwest, then westerly, along the descending ridge. There are the traces of a path, or what looks like one, at times, but nothing to rely on. The weather had also worsened (or I was now exposed to more of it), with a brisk wind (I'd guess - and seem to remember the forecast mentioning - 20mph or so. Not difficult to walk in, but problematic because I wanted to either aim into the wind, or get it behind my back, due to the driven rain).

The condition were inconvenient, rather than especially bad, but made locating the final western cairn of An Socach feel more satisfying. After a brief recce to double-check my location (the hill did drop away to the north, west and south as promised), I sought shelter from the cairn for a briefer snack and to decide my route back. This didn't take long; the main path beckoned, so returning along the ridge looked preferable to negotiating rougher ground for a quick descent to the southeast.

I did drop slightly to the north side of the ridge along the way back, only a matter of metres but that did seem to help block some of the wind and periods of light, but driven, rain. The showery rain eased as I followed a path down the steepish snout of Socach Mor. I even found the clouds gave way, restoring visibility, once I was below 750 metres. I passed a tall well-built cairn, where I paused to look down into the glen. 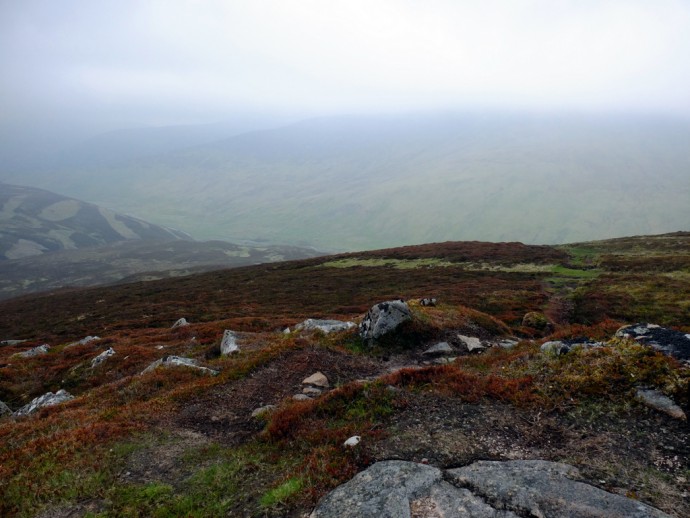 The path is easier lower down, though heather and damp ground increase. I accompanied a burn for a short stretch, coming out to join the vehicle track for the last couple of miles of walkout. That was enlivened by meeting a herd of red deer. I first noticed what seemed to be a handful, stood highlighted on a shoulder of the hill. More followed, then still more, as I extracted my camera. There were over 40 in all, with a mixture of stags and hinds; they headed past me, climbing the hill for safety. 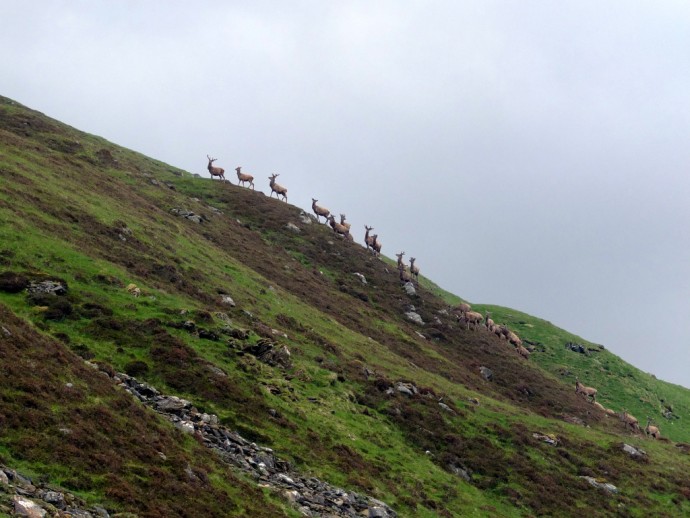 The sky was trying to brighten, though only managed a lighter shade of grey in parts, as the afternoon turned to evening. It was to rain more heavily overnight (making me glad of changing my minds from camping to seeking shelter in Braemar), but kindly held off until long after I'd returned to the car and the walk was concluded. 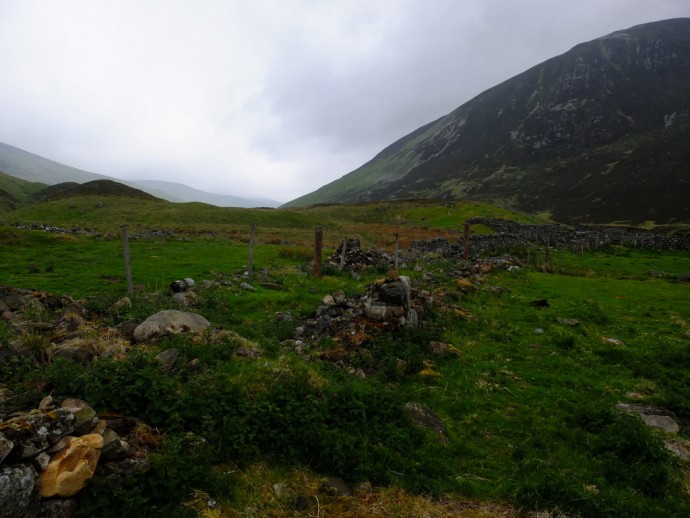 This map is, as usual, guesswork and fading memories, though does reflect my unconventional ascent.

That looks like not too bad a day after all, Driftwood. Nice shot of the deer; there's plenty of wildlife in that part of the Highlands.

simon-b wrote:That looks like not too bad a day after all, Driftwood. Nice shot of the deer; there's plenty of wildlife in that part of the Highlands.

From the other walk reports, this is either a cloud-magnet, or others also chose to do it when the forecasts weren't so good.
But it's a decent hill, set well back from the A93 (and ski developments, though I'd probably have caught at least a glimpse of those on Carn Aosda where it not for the clouds), with some shape to it. I can't speak for other times of the year, but I found it good going. I've seen mountain hares nearby (when walking the Cairnwell group).
Now I remember, there was a bird calling in the cloud - sounding spookily like someone whistling - during the ridge section. Either that, or An Socach has its own hill ghost!

It looks a good walk for a cloudy day, that one, to be honest. You managed to get some good photies despite the cloud too

- that's a nice one with the deer!

bobble_hat_kenny wrote:It looks a good walk for a cloudy day, that one, to be honest. You managed to get some good photies despite the cloud too

- that's a nice one with the deer!

To be fair to the cloud, it did let a fair bit of light through (if they had been dark grey rainclouds I'd have either been drenched, or wise enough to keep off the hills, though the first of those is more likely).
I've not encountered deer in those numbers on previous walks, so it was a moment to spot a handful up on the shoulder of the hill, then see so many more following while I was grabbing my camera from my pack.