Another blazing summer’s day, and an interesting walk along the undulating ridges around Grains Gill.

glaramara.gpx Open full screen  NB: Walkhighlands is not responsible for the accuracy of gpx files in users posts
From the verdant Seathwaite valley at the head of Borrowdale, plenty were setting out on varying routes towards the high peaks south, very few taking the alternative up from Stockley Bridge onto Seathwaite Fell. But this is a nice climb with lovely views back down the valley behind. Luckily, in the face of the combined wisdom of Wainwright, Nuttalls, and the OS, the final climb is no longer pathless – plenty of feet having trodden a common way southward up the very steep slope to pop out right in front of the Wainwright summit. The route from there to Sprinkling Tarn is one of constant up and down, across many other rocky little peaks and between tiny blue tarns – fascinating but confusing enough even in the brightest of sunshine. Great Gable, less than a mile away, stands out but there are great views of the higher mountains all around. Up the valley of Grains Gill to Allen Crags 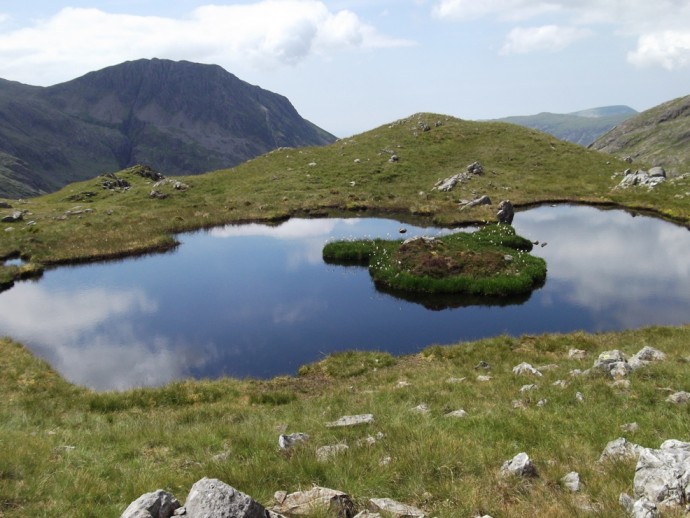 Lingmell, from the tarn below the highest point of Seathwaite Fell Sprinkling Tarn, the waters this day strikingly clear and still, is a beautiful place to linger, and it’s an easy stroll on a good path from there to this walk’s highpoint on Allen Crags; on a less sweltering day it might have been tempting to detour to Great End or Esk Pike, not far above. 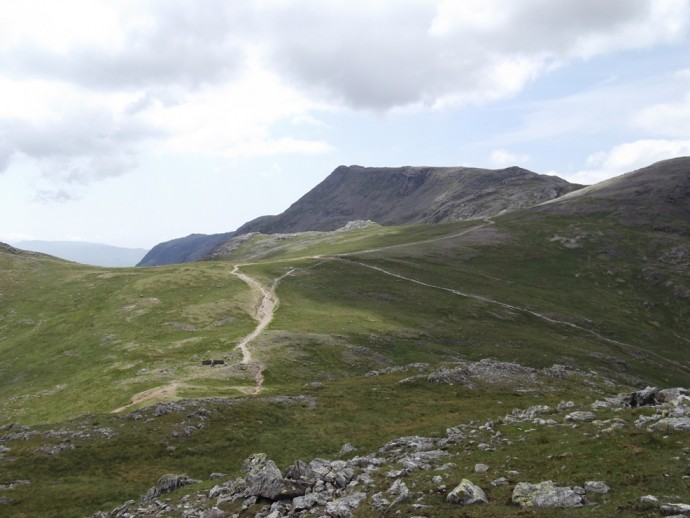 The way is clear from here to the prominent rocky top of Glaramara, but it’s a more challenging walk than might be imagined, plenty of sub-tops on the way with some short but quite sharp climbs, especially downward. This is the big brother of the similar traverse of Seathwaite Fell earlier – higher, longer, bigger rises and falls, deeper and more protected tarns – and it’s easy to spend a long time zigzagging curiously between the features of the ridge before visiting the three disparate peaks, each with their own vista. The North-Western Fells over Borrowdale, from Red Beck Top The descent north down some steep rock steps is an interesting, but not too difficult, challenge, and the best finish from there might be to follow the clear path heading over Thonythwaite Fell – but Dovenest Crag and Bessyboot lie the other side of Combe Gill. Yet more ups and downs this way, great views north and east, and some fine rocky peaks – especially that of Rosthwaite Cam – but much less clear a route and increasingly difficult underfoot, with some patches that might be painfully boggy in another season. Down Combe Gill towards Skiddaw The going is finally straightforward on the return from Tarn At Leaves – an easy descent over grass then bracken into Borrowdale and a trudge along the road home. Back to Combe Door & Head from the descent


Gruelling stuff in the heat, but a fascinating walk with plenty of real highlights.

Great pics yet again. Good walk, too. I was on Loughrigg Fell in the blazing heat on Wednesday.

What a stunner P, it must have been hard going in the heat too. Some of those pics are absolutely beautiful, the one from higher up, looking to Grey Knotts, Castle Crag, Grange Fell; with the Northern Fells behind is just fantastic, what a great shot of a wonderful view. Long may the blue skies continue