I was last up in Coire a’Ghrunnda in May of this year. I didn’t intend anything other than to attempt to scale Sgurr nan Eag. But I never made it… I could just about make out The Castle. I had scrambled up into the upper corrie over a couple of inches of wet snow, cold water on occasion running down the inside of my sleeves as I sought out hand holds hidden under the white blanket. That was fun!

The loch was choppy and the snow horizontal. Discretion was called for and I turned around.

It was now two months later. My May attempt was by no means my first visit into this spectacular corrie. In fact I had previously been there at least three times before – each time on pretty decent days. I had noticed the various rudimentary shelters constructed in various places around the loch. I had wondered what it might be like to use the corrie as a base. I now had the chance to find out.

I did not arrive at the car park just short of the Glen Brittle camp site until around 8.30pm after a long drive from God’s own county. But the signs were promising. I had packed my rucksack before I had left home. I was travelling light – a tent and sleeping mat, but no sleeping bag and a minimum of food. I was off and away before 9.00pm. The camp site was busy. It was warm and a modicum of sun bathing was still going on. There was no midge to cause the lily white skin on display to go blotchy. I passed a few groups descending the steps behind the toilet block and received strange looks. Surely I was going in the wrong direction at this time of day?

I was hot after 5 minutes and dipped my sun hat in the stream just after the path splits with that headed for Coire Lagan before plonking it back on my head. The walk across the moorland to the mouth of Coire a’Ghrunnda was a beautiful sweatfest. There was barely a breath of wind. Rum floated offshore The sun blazed as it plunged to the north west and the ridges above were tinged The scramble up the headwall was taken coolly and steadily. I arrived by the loch before 10.30pm. It was dead still in the corrie. The only sound was of the stream exiting the loch and the occasional passing insect. Still no midges!

I found a spot to pitch the tent, quite near to the foot of the “path” that leads up on to the ridge above and then had a little wander around. Rum was still there, wrapped in haze. The loch was flat as the proverbial pancake. I had one last look at The Castle before turning in. Somewhat different from the May view! I was woken by the increasing light at around 4.30am. OK so I only had about 5 hours sleep. But things had not changed outside. I had not in fact had the corrie to myself. Two guys who I was to meet later were camped on the other side of the loch. The Castle reflected in the loch. Here is the corrie below I had started off wearing trousers. Before I hit the main ridge I had changed into shorts. It felt hot even at this early hour. 35 minutes after leaving the tent spot I was on the crest of the ridge. Blaven hove into view. 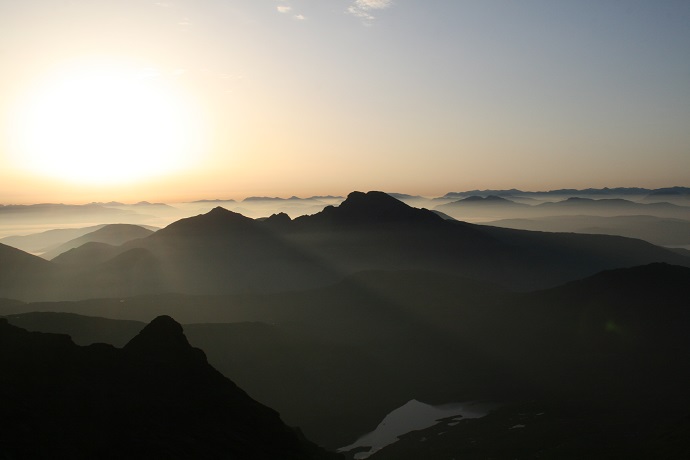 Wave after wave of ranges stretched out above the haze. Sgurr nan Eag’s ridge glowed in the early sun. That sun was also picking out the detail in the ridge to the north. My neighbours from the corrie caught me up just as I reached the summit cairn. They hoped to tackle the whole ridge. They set off for Gars-bheinn. I wished them luck – they would need it in the cauldron that the day was threatening to become.

So there I was sunbathing on the top of Sgurr nan Eag – the last of my Skye Munro repeats – before 6am. Still the air remained completely calm. I leant against the slab of rock supporting the cairn and closed my eyes. I felt the warmth of the sun on my body. Deeply I breathed in the fresh air. I could have gone to sleep. Ben Nevis soared in the distance. Oh my! I could not believe how fortunate I was to be here in such conditions. Here is a zoomed shot of Sgurrs Alasdair and Dearg. I almost felt I was intruding into the inhabitants of Soay. It was a shame to have to tear myself away from my eyrie. I had been there for 40 minutes and I had another mountain to climb that day. But that is for another TR. I was back at my car before 9.30am.

That's pure magic! The first shot of Blaven is amazing.

A wonderful setting with some beautiful photographs!

What a way to spend a morning....beautiful photos of what must have been a fantastic experience

I leant against the slab of rock supporting the cairn and closed my eyes. I felt the warmth of the sun on my body. Deeply I breathed in the fresh air. I could have gone to sleep

Thanks all. I feel that if I could have captured the experience in a bottle I would make a fortune from selling it! I wonder how often those conditions occur?

I think the hazy photos are particularly good. I really like the zoom over Gars Bheinn / Sgurr nan Eag and to Mull.