This is my very first walk report from May 2009 and our weekend trip to these remote hills in Knoydart.Three of us set sail from my friends house in Kingussie,stopping for a hearty breakfast en route and a short visit to view the Commando Memorial at Spean Bridge ( Well worth a stop if you are in the Fort William area). After what seemed like an age we finally reached the end of the long sigle track switch-back cul-de-sac that ends at Strathan, having almost been involved in a head on collision with some nutcase postman driving like Nigel Mansell in the opposite direction!

The small car park was almost full when we set off at 12pm up the private road to Glendessary lodge with a warm sun on our backs and clear blue sky. From the lodge we climbed up the Alt Na Feitthe to reach a boggy bealach at 400m where we stopped for our first break and a look down to Glen Dessary.

Skirting round the base of Stron An Tigh Mhoir we descended the grassy slopes 100m or so on a NW bearing to Glen Kingie, refilling our water bottles and crossing the stream without much trouble and eventually met the path which leads up to the head of the glen on its north side. After a few hundred metres the path turns suddenly north up a steep zig zag reach to Sgur Beag(890m) , a subsidury top on the ridge between our first two munros of the day. After a quick sandwich and a drink we left our bags and set off for a quick march up to Sgurr Mor (1003m) which offered fantastic views of the snow covered grey corries , Aonachs and Ben Nevis to the east, Loch Quoich to the north and to the west, our route over a ridge that would eventually lead us to Sgur Na Ciche which is a fantastic looking mountain, with the Cuillin of Skye beyond.

Doubling back on ourselves we continued from Sgur Beag and followed the ridge first over An Eag top (873m) before another long climb up towards Sgurr nan Coireachan(953m). At this point we were contemplating wether to go for the next hill or leave it for the next day and set up camp. As it was around 7pm we decided on the later and after reaching the munro top of Garb Choich Beag(968m) we found an ideal spot, flat, dry and surrounded by large rocks which would offer some protection in case the wind got up.

As we set up camp disaster struck...The day before we had been dividing up the load and were deciding whose tent we would take, my own which I had brought up from Newcastle which was adequate although not the best if the weather got too extreme, or my friends Vaude which was a little heavier although somewhat sturdier. We decided to go with mine as it was the lighter of the two and having wild camped on a few occasions before, weight is a lot over two days ( I even cut my toothbrush in half to save weight on one occasion!!).The reason my tent was so much lighter was I had forgot to pack the tent poles!!

It was too late to continue (around 8.30pm at this point) and coming down off the hill would have meant a night walk which we didnt really fancy. The sensible thing to do was to utilise the rocks and use the tent as a makeshift shelter. I knew I was in the bad books so I offered to scout around for fresh water and check the route up to Garbh Choich Mhor which looked pretty formidable from our camp. When I returned my two mates had managed to build something that resembled sleeping quarters.A quick feed and a shot of single malt and we got in our sleeping bags, then into our survival bags for extra protection. Unfortunatly we were on a slight slope and and after an hour or so all three of us were now outside the shelter having slid off our mats too! this basically went on all night, although we were not too cold the wind battering and the uncomfortable ground meant non of managed more than an hours sleep. Thankfully the rain held off too and by 4.30am dawn started to break. We were up at 5am, warmed up breakfast and were packed up and off by 6am.

What a contrast to the previous day, we had been hoping for great views across the Cuillin and the Islands from Sgurr na Ciche but now had typical Highland weather, sleet, snow, wind and visibility down to 100 yards. The climb up Garbh Choich Mhor seemed to take an age and took in many false summits before we finally reached the top (1013m). Our last hill and the one which looked so fantastic the day before was only 1km away as the crow flys but first we had to descend 300m or so to the Col, dump or bags again and scramble steeply through driving sleet to reach the summit at 1040m. I actually thoroughly enjoyed this scramble as I had managed to aquire some new found energy when we reached the col and climbed it in no time at all, the cold and wet didnt bother me in the slightest.It had taken less than 45 minutes to get up and down the best hill of the walk. Now all that was left was the long 15km walk in back to the car.

From the Col we decended over slippery wet boulders and rocky slopes taking great care not to slip with tired feet and full sacks on our back, before reaching the path that would eventually lead us back to Strathan. We finally reached the car at 12.30pm and by that time had decided because of the heavy rain and lack of sleep, camping at Glen Nevis and a few beers in Fort William followed by another walk in the Laggan hills was not a good idea. Instead it was back to Kingussie, hot steaming radox bath and an even hotter curry in Aviemore later on! sunset at the same spot...the next days cold, sleet and cloud stopped me taking any more pics 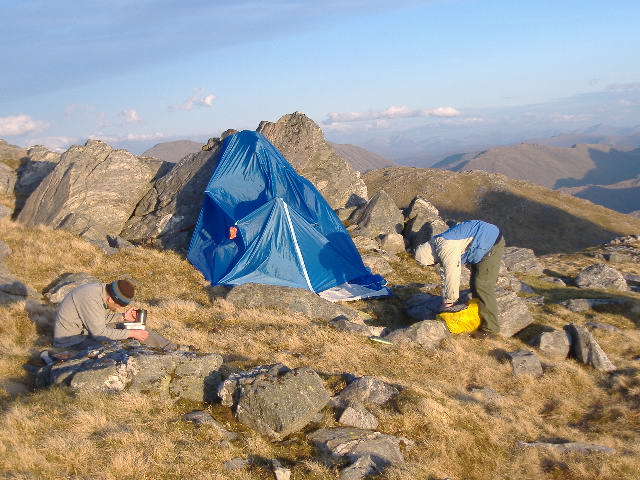 another of our makeshift shelter our emergency tent after we forgot the tent poles! 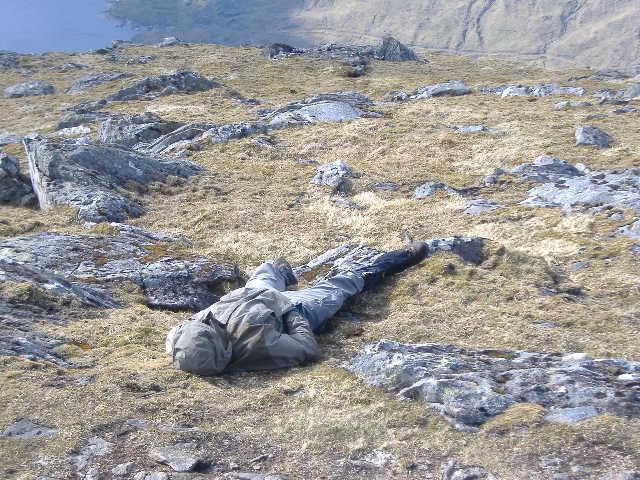 how to blend ito your surroundings! first view of Ben Nevis from the shoulder of Sgurr Beag looking down from the head of remote Glen Kingie from the bealach at Alt Na Feithe directly above Glendesarry lodge View up Glen Pean from Strathan view towards Nevis and the Aonachs from the Commando Memorial

Like the pictures of the tent. Reminds me of when I went to Jura; took tent poles and pegs, but forgot the tent.

dalavil wrote:Like the pictures of the tent. Reminds me of when I went to Jura; took tent poles and pegs, but forgot the tent.

That's what I thought. Tis better when you travel alone.

I've had two tent misadventures in the area in thedays when I thought a cheap tent from Millets would cut it. First was camping by the cottage in Upper Glendessary late at night as a wild storm broke. The little burn by us flooded and we had to scoot at about 1.00 in the morning and spent the night huddled in the cottages woodshed until dawn!

The second was up Glen Carnoch in a big thaw with water everywhere. The bottom of the glen was flooded and we struggled up painfully slowly, hoping to get over to Barrisdale - eventually we had to camp up towards Loch nam breac, with the same cheapo tent. The gound was so soft thta i tried to stick a flatstone under a tentpole and it snapped

We had to put stones all round the fly sheet to get it tight and slept in our survival bags with the the tent about two inches from our faces in driving rain.
Actually we slept pretty well but getting going in the morning was miserable and wet.
We began he walk out to Kinloch Hourn via Barrisdale at 8.00 with a hefty shot of malt each!!!

Next step was to buy a North Face Tadpole and bid goodye to tent disasters!