Munros included on this walk: Beinn a' Chochuill

Track_2013-09-10 164530.gpx Open full screen  NB: Walkhighlands is not responsible for the accuracy of gpx files in users posts
I'm beginning to think that it's my role in life (or on this site anyway) to report walks that have gone awry. The objective of this particular whippet walk was to find a route down to Lairig Noe from the summit of Beinn a'Chochuill, something that looks like an entirely practical proposition when the mountain is viewed from the bealach. This would make for a pleasant loop, returning to the hydro track from Lairig Noe and thence back to the B8077. The chosen day was cloudy but dry and the weather forecast suggested that the cloud would break in the afternoon. So off we went, The Whippet and me, heading up the Castle Estate track as we have so often.

As we began to climb much shouting and whistling became evident. The shepherds were out driving the sheep down to the farm, one in the glen itself (with four dogs who, being in work mode, ignored The Whippet entirely, though in other circumstances they bark their heads off when we pass the farm and they get his scent), the other high up on the crags to the right, his dogs harrying the sheep hither and thither on the steep slopes of Beinn Eunaich. Shepherd and dog high on the crags of Stob Maol

Apparently there were about 1200 sheep to be gathered in; no mean task! But leaving them to it, we continued up the track which heads steadily toward the standard ascent route up the shoulder of Beinn a'Chochuill. Cloud was still shrouding the summit, but with any luck it would burn off in the forecasted afternoon sun. The shoulder at centre and Lairig Noe to the left

Over the bridge across the Allt Lairig Lanachain, up the track that turns up to the right, and on to the tiny cairn at NN 124316 that is so easily and so often missed by walkers new to the route. Here we leave the comfort of the track and head up the shoulder. In the lower sections it's pretty much every dog for himself since there's no clearly defined route. The Whippet wanders around in his customary fashion, but I make him stick to today's plan which is to keep to the right edge of the shoulder - we've tried the left edge before and got pushed off route by the steepness of the slopes. As the shoulder narrows higher up the marks of many boots become clear and we follow them onto the ridge. Fine views back down to Loch Awe from here, but still no sign of the cloud lifting in any direction. Looking back down to Loch Awe from just below the ridge

Once on the ridge we are buffeted by a cold north-easterly, especially on the more exposed sections approaching the summit. My fingers start to go numb in the wind and I grope about in the bag for the thin gloves carried for just such an exigency. But somebody has removed them for the summer and placed them safely in the glove box at home. I'd like to blame The Whippet, but that would be unjust. I've only myself to blame. Oh yes, and I forgot to say. By now visibility is somewhat limited. Instead of sunshine breaking through, the shroud is getting thicker. At the summit cairn there's not much to be seen in any direction. Somewhere down there is Lairig Noe, but somewhere also down there are crags just waiting to trap even the wary - and The Whippet is anything but wary. After poking about a bit on the downhill slopes The Whippet agrees with me that it would not be wise to try to pick a route down in these conditions and we decide to make our way back along the ridge. Maybe the cloud will have lifted by the time we reach Lairig Lanachain and we can enjoy the views from Beinn Eunaich's summit instead. Nothing like as good as those from Beinn a'Chochuill, but at least some compensation. As we work our way along the ridge the wonderful landscape to the north flits in and out of view. 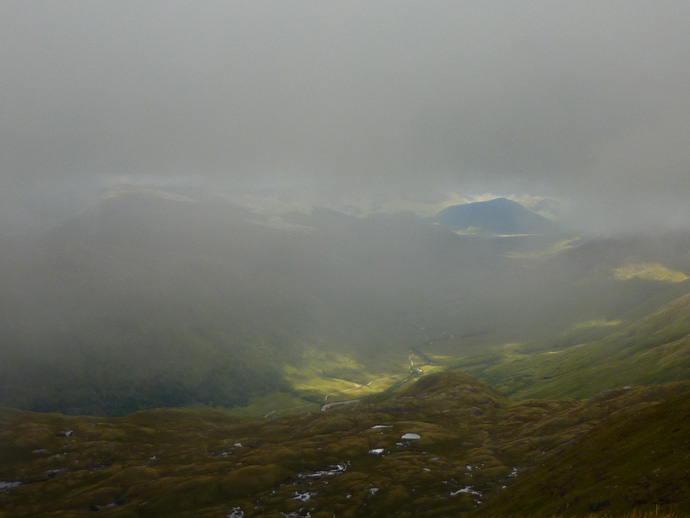 A patch of sunlight in Glen Kinglass

But nothing has changed as we approach Lairig Lanachain; if anything, Beinn Eunaich is even more claggy. The bealach of Lairig Lanachain at left and Beinn Eunaich behind

Following Allt Lairig Lanachain down to the hydro track is obviously the better bet, even if it is through a mixture of bog, rivulets, and uncooperative grass tussocks. We've done it before and know that the best route is to stay reasonably high above the stream on its west bank. The Whippet likes this descent because he can indulge in much pouncing upon small creatures. I say 'upon', but he never turns up any evidence of life in these pounces and I have come to believe that they are exercises in style rather than actual hunting. If you have ever seen a whippet pounce you'll know what I mean. It involves a fixed stare with one paw raised in preparation and then a stylised leap with all four paws off the ground. It is, as it were, performing a pounce. In pre-pounce mode on the way down

After much pouncing we reach the track at the hydro inlet where dog biscuits are taken. Then it's just a question of a familiar walk home. I keep looking back but to my relief the sun never does break through and Beinn a'Chochuill remains capped in cloud. The Whippet, meanwhile, has a puzzled look. There are no sheep. He has traversed this track many times and there have always been sheep to stare down and generally intimidate. But today, not a one. When we reach the farm I show him where they are, but he is not comforted. And the Lairig Noe descent will have to wait for another day. The missing sheep, with Beinn Mhic Mhonaidh behind

My labrador Jack has a penchant for sniffing out very small furries and swallowing them whole.

Not for the squeamish but at least it's quick!

Heavens! He must have a remarkable digestive system. At least, I hope so...

tweedledog wrote:Heavens! He must have a remarkable digestive system. At least, I hope so...

He's a labrador and his second name is Dyson!