With the forecast set fair for a cracking Sunday I was up for another overnight drive to some far flung remote glen and an overnight kip in the car. The far flung remote glen of choice this weekend was Glen Dessary, with a walk into Glen Kingie and a Corbett/Munro combo of Sgurr an Fhuarain, Sgurr Mor and Sgurr Cos na Breachd-laoidh. It's certainly an “interesting” drive at night, along the long single track road that runs beside Loch Arkaig to the end of the public road Sgurr Thuilm from the start of the walk

As it was I was struggling very early on, and on reaching a rusting gate in an old fence at the base of the south ridge of the Corbett Fraoch Bheinn a combination of my distinct lack of energy, what can best be described as a wretched, boggy track to Tomdoun I was walking on, a 4.00 a.m. alarm call on the Monday morning to look forward to and the temptation to simply jack it in and head home, all led me to make a snap decision en route to scrap my plans and do something shorter and hopefully less purgatorial instead.

I initially thought I would do just the single Corbett of Fraoch Bheinn, but as it was I ended up adding on its neighbour Sgurr Mhurlagain as well. Despite the leaden legs and rubbish boggy ground my GPS suggested I managed a trip of over 11.5 miles on the day and plotting the route on the walkhighlands GPS planner suggested around 5,000 feet of ascent. Seems I probably could have completed my originally planned route after all had I stuck at it.

Making the decision to change my plans so early on was annoying. But I knew I wasn’t at the races, so saw no reason to push things. As it was Fraoch Bheinn, and its neighbour, gave a superb day

The route up Fraoch Bheinn was pathless, but involved some elements of picking my way through crags and over boulders, which I was enjoying. At this stage I wasn’t concerned with setting any sort of pace, so it was just a nice amble up through the rocks and crags of the south ridge. As a viewpoint it also afforded superb views back toward Gaor Bheinn, Braigh nan Uamhachan, Streap and the two tough Munros of Sgurr Thuilm and Sgurr nan Coireachan The route up Fraoch Bheinn

As height was gained the Ben made an appearance, along with CMD and the big bulk of Aonach Mor Into Glen Dessary and the hills to the south 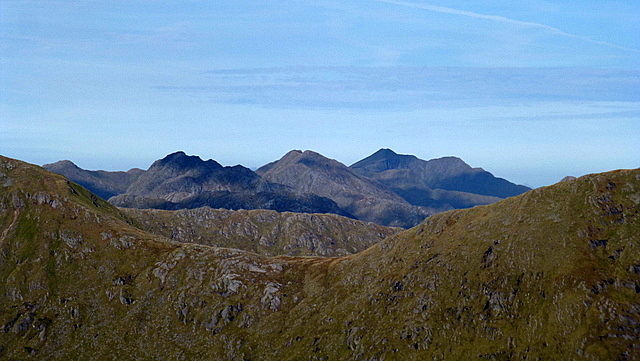 My guide to the Corbetts suggested I should make my way across to the hill’s ridge to its north summit and there admire the crags on that part of the hill. Then I should return and make my way down via the route of ascent. Fraoch Bheinn north east ridge and the view to Gairich

There were quite a few more craggy bits to navigate through than on the south ridge. It was all fairly straight forward though

I was still ambling along at this time, but with the sun out and warming my bonce I was feeling a whole lot better in myself. I’d probably say the walk along the summit and then down off the north ridge was the best bit of the day

Stunning views of my originally intended route ahead of me, which looked eminently more doable even in my lethargic state than I had convinced myself it was. I shall definitely return.

I also had to get a few images back up the descent route……….just to panic MrsR Back toward the Fraoch Bheinn summit Some of the crags descended

Eventually I decided to drop down off the east side of the north east ridge and reacquaint myself with the wretched, boggy path back toward Glen Dessary. I’d been eyeing up Sgurr Mhurlagain from Fraoch Bheinn, and it didn’t look like too much extra effort from the high saddle between the two Corbetts

The traipse over the boggy ground and up the west side of its south ridge wasn’t too bad, but once on it the ridge is a bit indistinct. And pathless. By now I was thinking more about my pace and so this section was a bit of a slog to get me to the top as soon as I could. More of a slog than I had bargained for really, but having started the hard bit I decided to finish it seeing as I was so close to the top.

The slog was worth it though, with more great views all round, especially down the length of Loch Arkaig, as well as a super view northwest toward Beinn Sgritheall Cloud glancing the summit of the Ben Panoramic view back off Sgurr Mhurlagain Met the only other walker all day on the summit. A chap over from Edinburgh out with his dug. Stopped and had a good chat with him for a few minutes, discussing the various hills in the area. I did get slightly concerned at one point when he suggested the crags and boulders on the side of Fraoch Bheinn would be a good place to hide a body if I ever committed a murder

I was thinking of asking at that point just how his good lady wife was……….but thought maybe not

I took a few minutes on my own on the top once the chap and his dug had headed down. I then descended down off the south ridge of the hill, taking it as far as I could before making a short detour back to the awful track. Once on that it was a simple case of slipping and sliding my way back down to the Glen Dessary track and back to the car. Back to Streap and pals again So what may have started out as a bad at the office certainly ended much better than I might have thought an hour or so into my walk. I was shot to bits for sure, but certainly glad to have stuck at it and got to enjoy two unsung little gems in amongst their bigger cousins

Brilliant photos, Pete - a favourite area of mine. These pics really do justice to the area.
Iain

Lovely day, and you included the best bit of Fraoch Beinn, which most people seem to miss out

Stunning photos Pete. A lot of bonnie mountains in that area which is just as well with the long drive up Loch Arkaig to get to them.

really looking forward to exploring this area. Sunday was a great day to be out. I was on Beinn Sgritheall ..should have given you a wave!!

Bruno wrote:Brilliant photos, Pete - a favourite area of mine. These pics really do justice to the area.
Iain

Thanks Ian. It's a bit of a favourite area for me too and one I'll be back to explore more

Glad you enjoyed the photos.......I've been known to take a few when out on a walk

malky_c wrote:Lovely day, and you included the best bit of Fraoch Beinn, which most people seem to miss out

Thanks malky. As soon as I saw the NE ridge I have to admit the only thought I had was "I'm having some of that"

Johnny Corbett wrote:Stunning photos Pete. A lot of bonnie mountains in that area which is just as well with the long drive up Loch Arkaig to get to them.

Cheers JC. A great area and yes, a long drive along the loch. Some sections of that road toward the end of the loch were a bit tasty in the dark, with the fairground-ride-like rise and falls

SAVAGEALICE wrote:really looking forward to exploring this area. Sunday was a great day to be out. I was on Beinn Sgritheall ..should have given you a wave!!

Hope you had a great day on that one

Smashin'report again Pete,never quite made it down the Arkaig road again this year,just need to look at your pics till next year

pigeon wrote:Smashin'report again Pete,never quite made it down the Arkaig road again this year,just need to look at your pics till next year

Cheers pigeon. It's a damn long road, that's for sure

But some of the best walking I've done so far

You need to get yourself back there and explore

Cheers lochlaggan. I suspect the landslip you are referring to was the area it was suggested I might like to lose my imaginary murder victim.........should the need ever arise

One of these days I'll read one of your reports and find that everything went exactly according to plan....

rockhopper wrote:One of these days I'll read one of your reports and find that everything went exactly according to plan....

It feels there is a bit of a theme to my reports rockhopper, but most do go to plan I think

I just love being out in the hills and these two Corbetts gave me great views, so more than happy in the end