Route description: Beinn an Oir, via Loch an t-Siob


I sat in the pub on April 10th 2009 at 9.45pm having just played the last of our kick about Friday football games for the year and told a disbelieving audience that I was off to Jura the next day. As I said the words the timetable I'd worked out came to mind. Of course there's no problem -leave early for the mid-day ferry from Kennacraig to Port Askaig and then skip over to Jura. We had our cottage booked and my wife had insisted on taking the car over so getting there would be easy.

So we set off and made the journey from Aberdeenshire to Kennacraig in the AA predicted time of 5 or 6 hours. I hadn't been to Kennacraig before and hadn't looked into it at all, assuming this would be another quaint west coast ferry town. I had at least expected it to be a place. But no, it is in fact a pile of rubble attached to the mainland via a causeway on which Caledonian MacBrayne have deposited a portakabin!

The ferry journey is enjoyable with good views of Jura and Islay. We didn't have long to wait in Port Askaig but I wanted to stretch my legs so went for a stroll whilst my wife manned the car. I had inadvertently locked the doors though and this activated the car alarm. So there I was wondering which twit had set their alarm off whilst my wife frantically tried to re-set it. Well, we at least saw the funny side though the others in the queue didn't seem too amused.

Rather than wasting time looking for our cottage we decided to set off on our walk as we had a limited period available. We got to the start of the path in at about 3pm and this would give us four hours to get to the top of Ben an Oir with a decent cushion of daylight for the descent.

The weather was excellent -sunny, calm and cool. The walk in was very easy up to Loch an t-Siob at 150m; on grass, peat and heather. Thereafter the ground got steeper for a bit as we traversed over stony grass to the base of a ramp at 400m on the east that cuts through most of the hilltop boulder field. That ramp ends just below the 763m northern top. We chose to ascend to that top and then double back to the main summit. My wife didn't like this short steep section and said she would wait there for me but a few minutes later I saw her head and then body pop up on the ridge just as I reached the main 785m summit. The summit itself is a narrowish boulder field with a pathway between the tops seemingly scooped out of the boulders (this done by the OS I think).

I was really proud of my wife overcoming her anxiety and meeting me in the middle of the summit ridge -a mixed comic and romantic moment.

The views all around were fantastic. Maybe it was just being removed from the more familiar west coast land marks that made the difference but I think Jura does have distinct topography and being able to see the sea all around is great. There is a narrow continuation of the main ridge southwards and downwards but we just retraced our steps -not before spending a half hour admiring the sinking sun. I love that sort of thing but my wife just gets concerned about the time and loss of light. Nothing to worry about I assured her but she was off at speed down the hill so I had to follow. Before long we were back in step and we had an hour of light to cover two hours' walking. But with such a big obvious path and torches what could go wrong?

We crossed the loch stepping stones easily enough and could just make out the rough line of the path ahead. Now the trouble turned out to be that the dry path in we'd been able to follow was bounded by awful bog either side and the two were indistinguishable by torchlight so we simply ended up guessing where to go. The last kilometre was especially boggy -two steps forward, one back, one down, one up and so on. This led to no little screaming from my wife and I feared for our two year old marriage. We were there on that last kilometre for an hour and a half. It would have been amusing I suppose for anyone passing by on the road but to repeatedly sink to your knees in mud knowing how close the road was near brought tears to my eyes. We got there eventually of course and drove to the cottage. Thankfully there was space to park nearby and only a short distance to carry my wife's boot full of necessities for our overnight stay. We woke to find that we were in a really beautiful if basic cottage and had the best cup of tea ever on the grass outside. We only had the morning there before we had to get to the ferry but we had a relaxing time strolling by the shore.

Jura -if in doubt just go there. You'll love it!

We think that hour in the bog of Jura brought us closer together because we needed each other to get out of it. Sounds melodramatic but we both look back with fondness at our battle with the soggy ground and with each other. the south ridge of Beinn an Oir my wife now getting nervous about descending in the dark, me dazzled by the setting sun 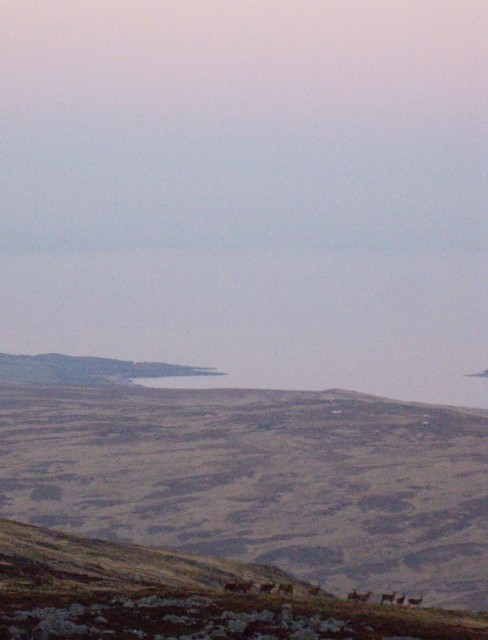 time to be eastering home a cup of tea next morning

Very entertaining report, your photo's demonstrate the lack of light

Never been to Jura but the hill certainly looks like fun

Never been to Jura but the hill certainly looks like fun

Thanks. Have only been on Ben an Oir but all the Paps look worth climbing, as do the smaller hills further north.