Wanted out into the Mountains again but unfortunately no car, it had to be somewhere using public transport so decided on Ben Avon and Beinn a’Bhuird. We got off the bus at Invercauld house and headed through the gates to start our hike, took a wee break first then headed off . We set base camp on the southern side of Allt an t-Slugain stream and the Midgies were well out in force, absolutely millions of them in dense swarms, tried to have some food but it was too much and just got in the tent away from the midges , later in the evening we took a walk to see if there was a better place to pitch tent but there wasn’t really anywhere better so just stayed where we were. Next morning we woke to rain, it rained heavily the whole day so we decided just to chill out in the tent and take the gamble that tomorrow would be dry. Later that day we did get a break in the rain and decided to move base camp . Woke up next day with low mist which looked very cool indeed, we had breakfast then headed off at 6am towards a misty Fairy Glen . The walking is pretty straight forward and the ascent up to the sneck is not that steep then it’s a right turn up a steeper slope towards Ben Avon and its massive Tor . We climbed the Tor to the top then had a break and some food

. Next time I’m on Ben Avon I’m going to go to every one of its many Tors. After a wee discussion we decided to go over to Beinn a’Bhuird which is a massive mountain with huge impressive corries . As we were heading over we seen a flare go off near Carn Fiaclach and a mountain rescue helicopter, we had met a couple the night before who were going climbing the next day and we thought and hoped it was not one of them injured 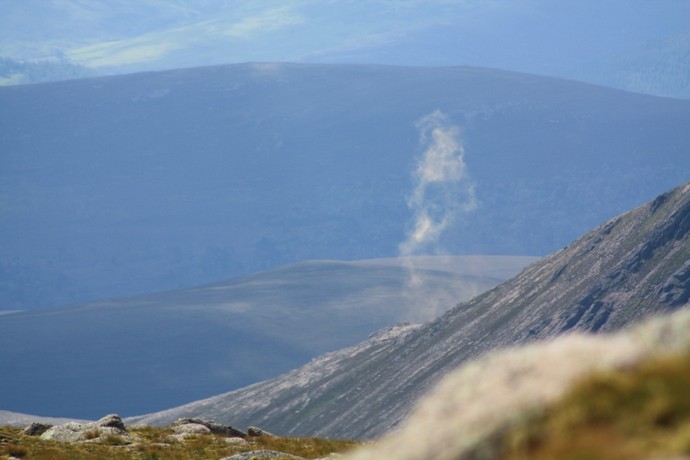 . It turned out to be a training exercise thankfully. We got to the North Top and took a break and had some coffee and food. Looking North Westerly we could see the Cairngorms range which was rather nice

.We headed off towards the South Top

which is the Summit of Beinn a’Bhuird then descended down Ear-choire Sneachdach. Once we got to the rather wide stream it was a case of boots and socks off and trouser up past the knees then we headed across it put our stuff back on and headed back to base camp. We wanted to search for the Secret Bothy but ran out of time as we had a bus to catch. Got to camp, packed everything away and got to the Invercauld gates with 15mins to spare before bus came so it was out with the Trangia stove and boil some water to fill flask of coffee for on the bus. All in all it was an absolutely fantastic day and hike although a long one.