After the usual Christmas excesses, a definite need for exercise. With the weather not looking particularly inspiring, I was looking for something fairly close to home with a good bit of steep ascent in it. I'd never been up to Loch Fannich before, so that seemed like a good bet. This would be a great starting point for a longer round of the Fannichs, but I only had a morning available, so just took in the eastern two Munros.

Fannichs.gpx Open full screen  NB: Walkhighlands is not responsible for the accuracy of gpx files in users posts
Loch Fannich is also the most interesting place to climb An Coileachan from, as it throws down large crags and shapely spurs in the form of Garbh Choire Mor. Unfortunately I didn't get a great view of it before starting the ascent as I'd cycled up the private tarmac road from Grudie Bridge in the dark. Without enough light to pick the best route up, I strolled through the small quarry (presumably quarried for dam material) and made my way up onto an ill-defined spur.

The going was steep but there appeared to be animal tracks to help me on my way. This side of the hill is quite wet and covered in slabby rock, which made for an awkward zone full of sheets of water ice to negotiate. There was enough solid ground to avoid the need for crampons, then it was into the cloud and into ankle-deep gradually melting snow.

Creag a' Chaise and Loch Fannich: 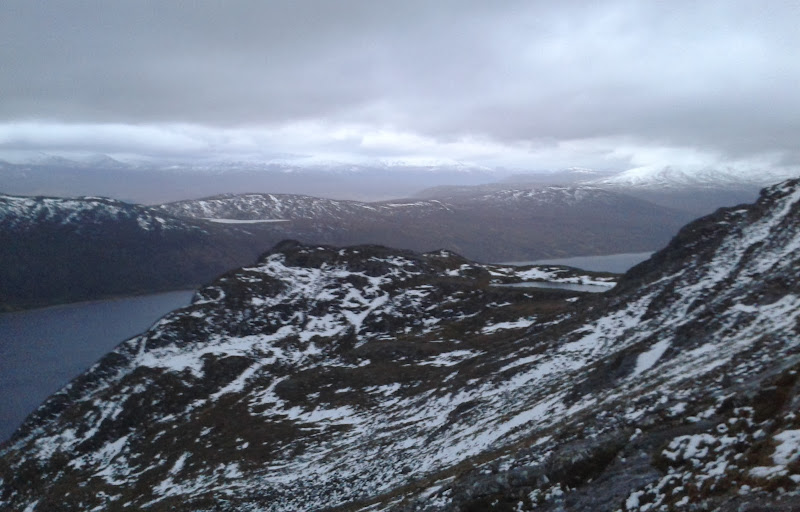 Faire nam Fiadh and the edge of Garbh Choire Mor: 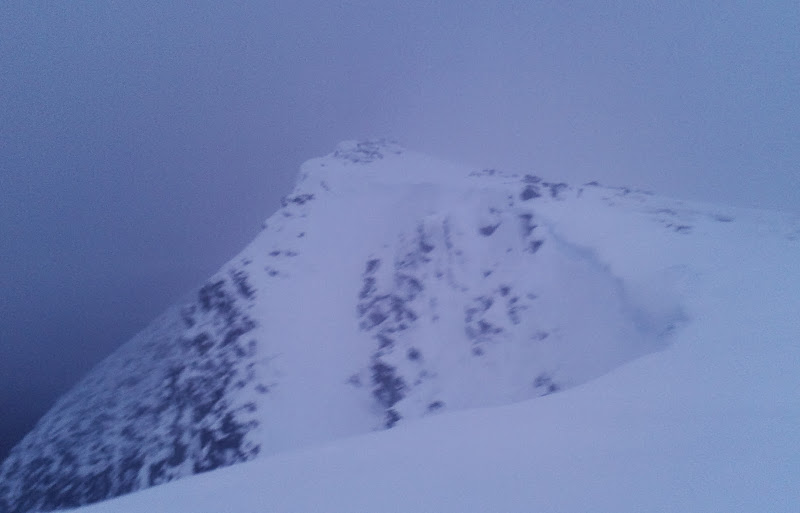 The last section up to the 798m spot height, then onward along the top of the corrie looked quite impressive, with sharp drops and decent cornices forming. Shame the weather didn't allow me to appreciate it in full. Then it was out with the compass and on a bearing for the summit of An Coileachan. Above 800m the snow was firmer. 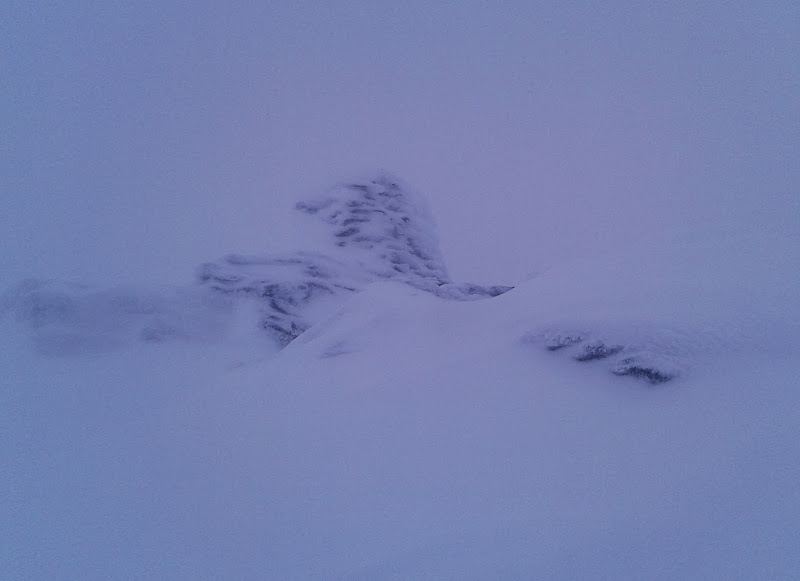 Although full whiteout conditions rarely occurred (too many bits of rock poking through the snow) there was very little to see until the summit cairn. Up here at just before 10am, and there were footprints already, suggesting no snowfall in the last 24 hours or so. There was the odd strong gust, but for the most part the wind was quite reasonable. It was behind me too, which helped.

A series of bearings took me down to the col, up to the 922m top and onto Meall Gorm, sometimes following the other footprints, sometimes not. On a slightly steeper section of descent, the snow became very hard for a short while, so I got my axe out. 5 minutes later I was at the col and up to my shins in snow again, so it went back in the bag pretty rapidly.

After passing what I thought was the cairn on the summit of Meall Gorm, I overshot a little way to check there wasn't another one. Nothing to see, so I changed my bearing and headed down the south ridge towards Fannich Lodge.

Stalker's path on the descent of Meall Gorm: 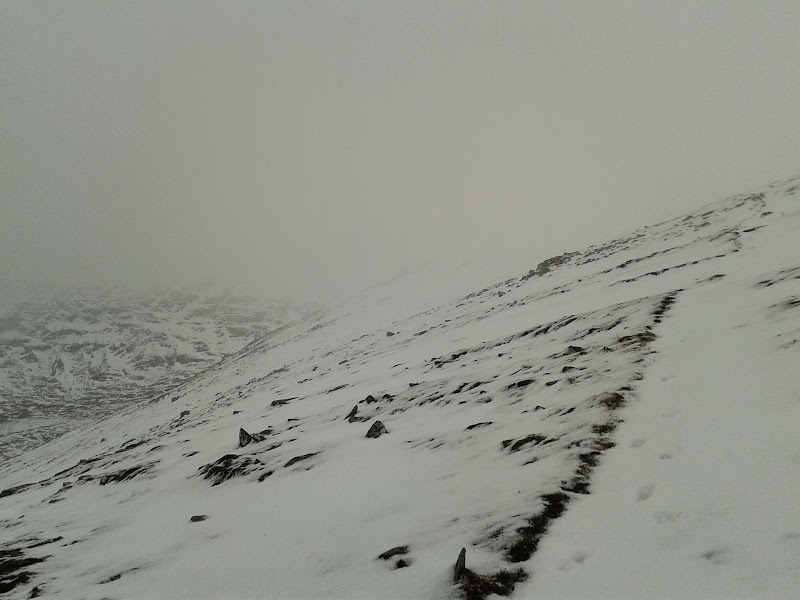 Some uneventful descending took me to the stalker's path traversing round Meall Gorm. I was quite pleased to spot this, as I had expected it to be too deep in the snow to be noticeable. Then I emerged from the cloud with the rest of the walk stretched out in front of me. 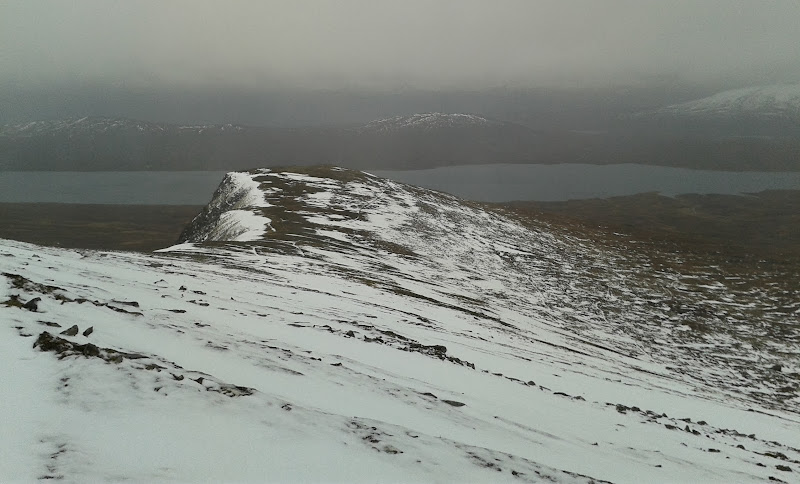 Once out of the cloud, the wind picked up significantly. I followed the path round the back of Creag a Choire Riabhach to try and avoid it. At this level I wasn't too concerned, but I wouldn't have liked to be on either of the summits in this.

Looking back up Meall Gorm: 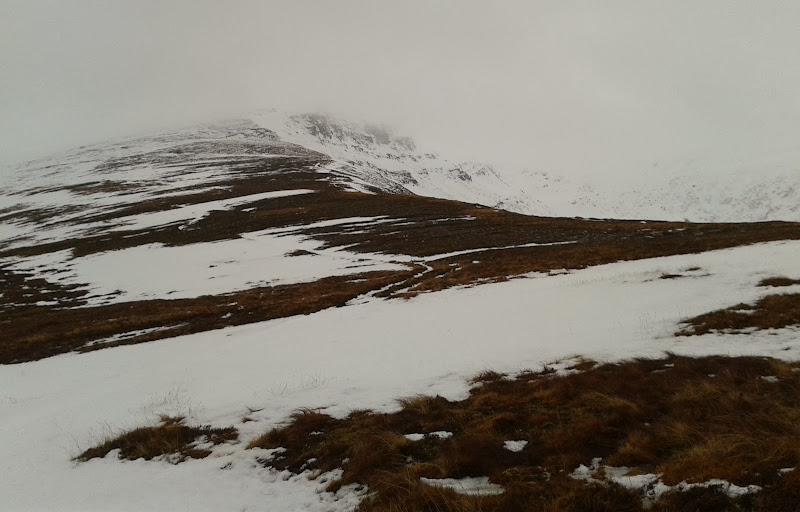 The path was pretty good although a little boggy in places. Lower down I made the mistake of following a bulldozed track that cuts around the outskirts of Fannich Lodge. This was dirty and twisted all over the place. Probably best to head all the way down to the lodge.

Still, I was back on tarmac before midday, with an easy stroll back to the bike. I passed a BT guy along the way, who appeared to be hunting for the buried cable to the lodge in the verge. Rather him than me!

Although Loch Fannich is quite a long way east, the gap of Strath Chrombuill allows you to see right down Glen Torridon. I caught sight of Liathach and Beinn Eighe today, although they didn't really stand out in the grey conditions. 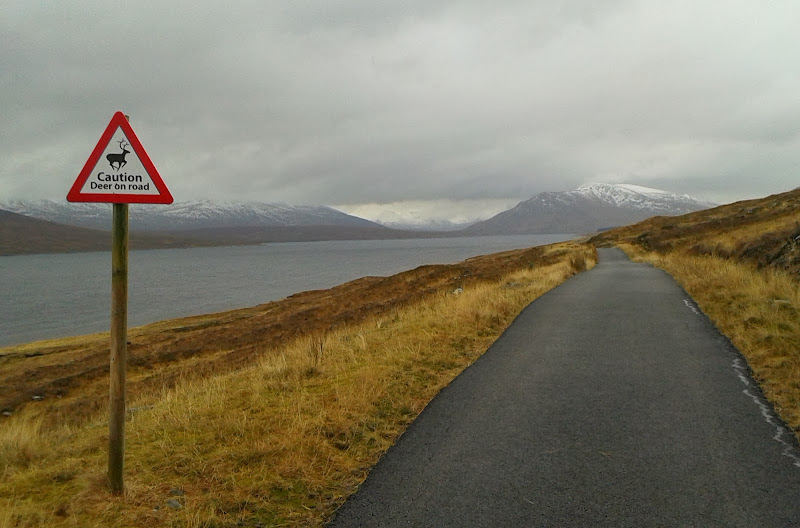 Before long I was back at my bike, and able to get a better look at my ascent route. I'd quite like to have another look at this end of An Coileachan in the near future.

An Coileachan ascent route is just to the right of centre: 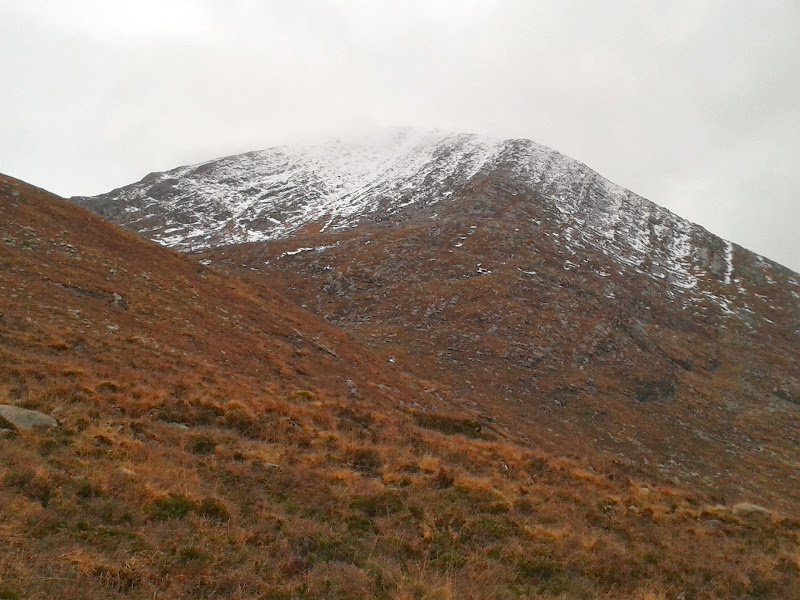 Then it was an easy cycle (mostly downhill) on the tarmac road back to Grudie Bridge. Carn na Beiste looked like a nice little summit - I'll need to work it into a route over An Cabar at some point.

An Coileachan and Garbh Choire Mor: 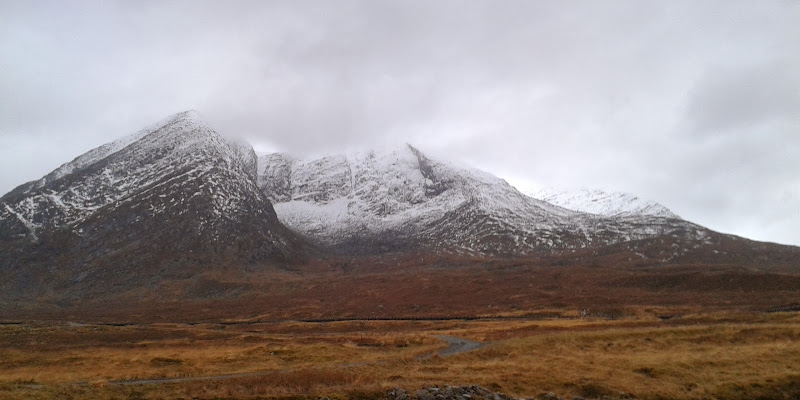 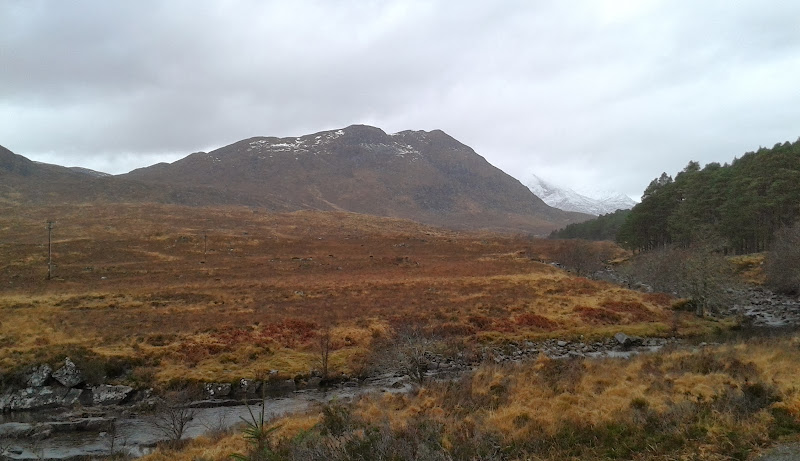 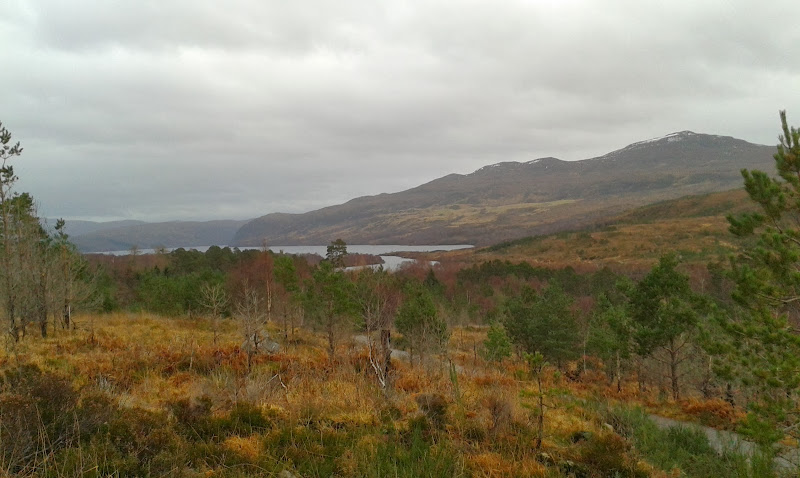 There was a bit of sunshine on the way home, but I'd promised to be home by late lunch, so I didn't regret the timing of my walk. Nice to get somewhere new, particularly somewhere so close to home. Looking forward to approaching Sgurr nan Each and Sgurr nan Clach Geala from this direction too.

Handy report Malky,i've got these down as high priority,being the only 2 Fannaichs i've left to do i'll be doing them the same way,just need the weather to improve

Looked Dire above the snowline malky ......knew youd be out though
cant keep you off the hills eh

pigeon wrote:Handy report Malky,i've got these down as high priority,being the only 2 Fannaichs i've left to do i'll be doing them the same way,just need the weather to improve

So have i, give a shout pigeon if you fancy company

pigeon wrote: the only 2 Fannaichs i've left to do i'll be doing them the same way

Sounds like a good plan: I wouldn't recommend doing just this pair from the north. The going along the upper part of the Abhainn a' Ghiubhais Li is just awful: bog, deep heather and boulders!

I m planning to get out tomorrow , not been on the hill since early Nov ,weather has been astonishingly poor in the West

Cheers all. I'd definitely recommend doing anything you can to avoid approaching An Coileachan directly from the Ullapool road. It is pretty nasty!

Nice one Malky, the Fannaichs seem a lot more quiet and tranquil if you go in from the south.. I like it

Tried your route up an coileachan a couple of years ago in January, and had the my scariest moment on the hills when I got blown off and couldnt get my ax dug in.. Still got a dodgy shoulder to prove it

malky_c wrote:Cheers all. I'd definitely recommend doing anything you can to avoid approaching An Coileachan directly from the Ullapool road. It is pretty nasty!

It's not too bad if you exit from the upper gate at the end of the forestry and make a rising traverse over Drochaid a' Ghiuhais Li, but only worthwhile if you are going to include Sgurr Mor and Beinn Liath Mhor in the round.

It's not too bad if you exit from the upper gate at the end of the forestry and make a rising traverse over Drochaid a' Ghiuhais Li, but only worthwhile if you are going to include Sgurr Mor and Beinn Liath Mhor in the round.[/quote]

Yes it is! It's a miserable long heather bashing slog over featureless terrain to a pair of underwhelming lumps that happen to be Munros, the only redeeming factor being the return to the forestry track on the way back to the car! And it snowed!!