Having driven up from Warwickshire to Glasgow on Saturday, the excitment was barely controlled when MWIS said there was an 80% chance of cloud free Munros where I was planning to go the next morning. So, this report is what the other 20% experienced. I know, it's not what probability theory and the statistics of chance really mean, but that's what it felt like when you could just make out the vague line of a horizon. I'm grateful to Curly Wurly for the photographs from last month on the same route - at least I can now imagine.

By today, cars will be reaching the Vistors' Centre car park with ease. On Sunday morning there was only an extra 100 metres in each direction to be added to the climb for those unloading skis and snowboards as well as walking gear. "Let's be optimistic" was the general air prevailing.

But once the nature reserve had been passed through quickly, the route towards the open hillside of Beinn Ghlas just disappeared into mist that seemed to be coming down to meet you. Oh well, at least the snow was still firm and the tracks of the previous day's predecessors could be followed in a silent, featureless trog with the mind coasting in neutral once the way was safe and clear. Optimism fuelled the legs and the lungs as the steeper ground just below the top of Beinn Ghlas tried to take its toll, and then even firmer patches of snow suggested that the crampons might be a good idea.

At this stage, company, in the form of a trio from Bristol who had flown up the day before with similar levels of eagerness based on the MWIS forecast, rose from the mist below. Together, we traversed Beinn Ghlas and chatted to a couple of American lads coming from the opposite direction. By the size of their packs and the tell-tale mats rolled on top we suspect they'd spent the night up top. Our optimism was stoked still further by their news that Ben Lawers had cleared late the previous afternoon, and only moments later the ethereal outline of a crag materialised on the other side of the col. 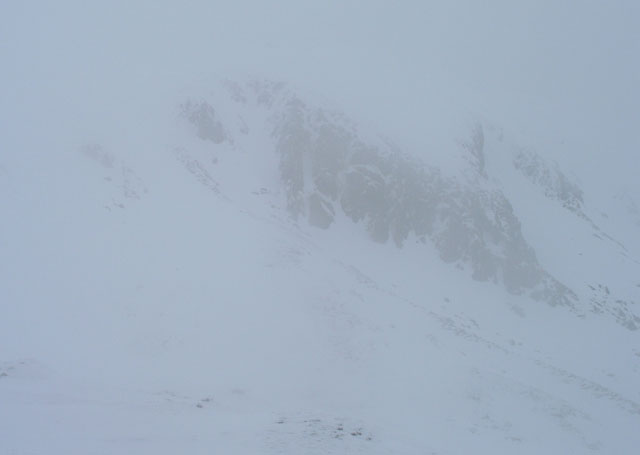 From col below Ben Lawers

In the end it was just tantalising on the top of Ben Lawers. First, there was the hint of something more solid than merely darkened cloud on the distant far horizon to the south west - Ben Lomond we reckoned by its shape. Then the south ridge briefly appeared beneath our feet, followed by a panning shot of the cliffs below Meall Greigh. Then the cloud line returned again. "It's like being on Easy Jet" came a Bristolian quip whose optimism was now being warmed and reinforced by coffee and the prospect of a patient wait. A brief cameo appearance by the ridge of Beinn Ghlas stopped short of revealing it's summit, and at this stage optimism was finally shelved in favour of descent. 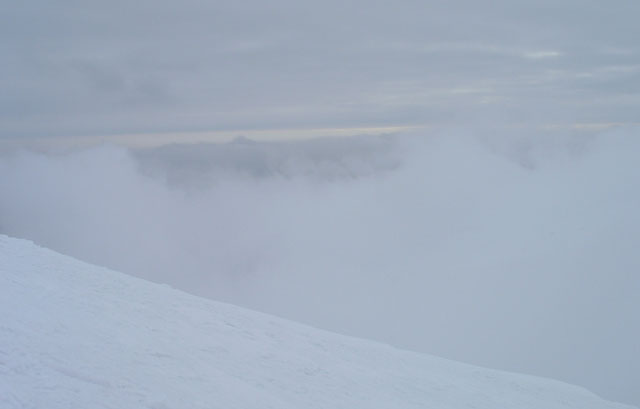 South from summit of Ben Lawers 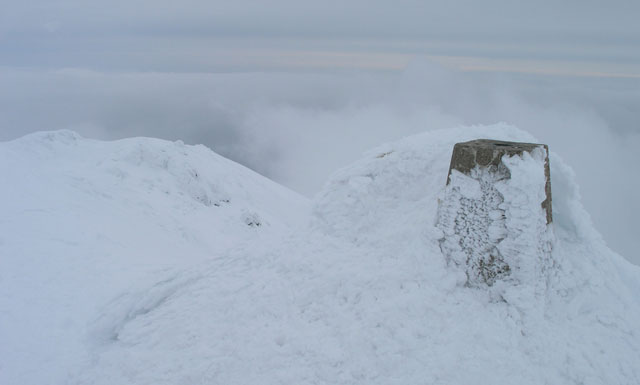 Retraced steps revisited the earlier top but it still was not seen. Although a view of the valley appeared some three or four hundred feet below the top of Beinn Ghlas, no amount of turning round or snatching quick glances caught the clouds off their guard. The tops of both remained covered all the way down to the Vistors' Centre. But, the frustration was in front; as the car park got nearer, the sun touching the hillside on the opposite side of Loch Tay was progressing gradually westwards towards us. It brought to mind the bad weather days at the cricket when they just manage to get a quick twenty minutes' play at the end of the final session - when you've already left the ground. No, the final look over the shoulder saw the tops still under the covers. 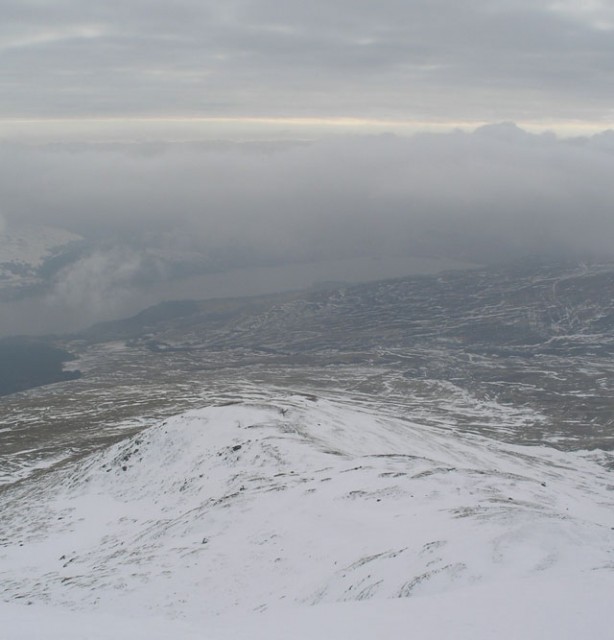 Never mind. It was still a good day, with a couple of tops achieved and the snatched views were worthwhile, however briefly they hung around. The chat and the unexpected company were enjoyed, and it was one of those days when, with no panoramas to occupy your thoughts, the mind wanders, digresses and muses. In the end, cobwebs are cleared, and optimism for life is invigorated. And there's always tomorrow.

At first I thought you had uploaded blank images

allansmitchell wrote:At first I thought you had uploaded blank images

Me too! Ah well, the Lord giveth.....and the Lord taketh away. Even on the hills!

I have soooo many days like that in the Munros!

We had the same conditions (minus the snow) when we did Beinn Ghlas to An Stuc and back... but we were lucky in that, when we were descending from Ben Lawers on the way back, it did indeed clear