A crack at Crock and Hare Cairn

A crack at Crock and Hare Cairn

our_route.gpx Open full screen  NB: Walkhighlands is not responsible for the accuracy of gpx files in users posts
Well, I never really believed Crock could be as tricky as people were making out. I thought it must be possible to add on Hare Cairn without too much trouble. But I was proved wrong...

I also rather stupidly thought that the day would've been long enough for me to add Corwharn onto this loop, but was most definitely proved wrong on that count - a combination of a distinct lack of fitness (still eating Christmas chocolate), a too heavy pack (in training for bigger things), and eyes bigger than my stomach (or the walking equivalent anyway) meant that this was way beyond me today.

The draw of Corwharn meant that I parked at the car park at the north east end of Backwater as this would be where the route would've ended, but if you want to just do Hare Cairn and/or Crock from this side, you can park further up as foggieclimber did in his report.

It was a lovely clear day to start with - cloud lifting off all but the highest tops off to the north. Flocks of starlings and chaffinches, along with swirling lapwing made for a lovely stroll along the edge of the loch and on to Glenhead Farm. Hare Cairn emerging from the mist The first two footbridges marked on the map over the Glendamff Burn don't exist, but not far before the abandoned cottage with the lovely name Barny, the strange gap in the stream marked on the map is a little bridge. If you cross there then you can use a gate to access the open hillside. There seems to be no alternative to the obviously much climbed deer fence to the north of the summit, which is a shame. Maybe us walkers should offer to club together to pay for a stile or gate, rather than having to slowly destroy their fence...? Or have a wee working party to build one? From there it's a half km stroll to the top. After lunch and practicing belaying from the trig point (I need to redo my 'safety on steep ground' day for SML - hence the heavy bag), I planned my move towards Crock. 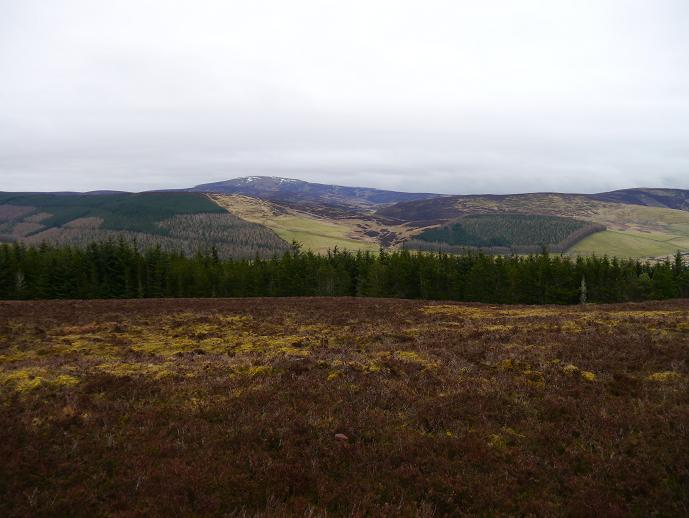 Cat Law from the top of Hare Cairn 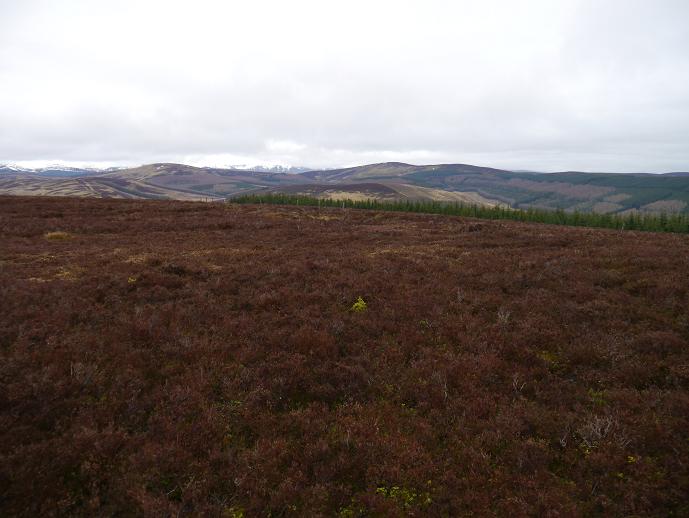 Corwharn on the right looking a long way away, because it is

I had a clear view through my binoculars over to Crock and thought it looked pretty straightforward, even if there was a short section of windblown trees just before the top... I had thought I'd probably have to do some crawling under trees to get down the west side of Hare Cairn to the track running round that side. But that side has mainly been felled and in a straight line between the top of Hare and the top of Crock, there's even a bit of a track. So I was thinking this was all easy as I descended straight down and then zig-zagged on tracks across the valley and back up towards the felled area on the east side of Crock (the southern footbridge and one of the bridges on the track don't exist, just the one on the main track to Glenmarkie). I then ascended up the northern edge of this felling as the windblown looked thinnest at that end. It was indeed easy, but then came to windblown. 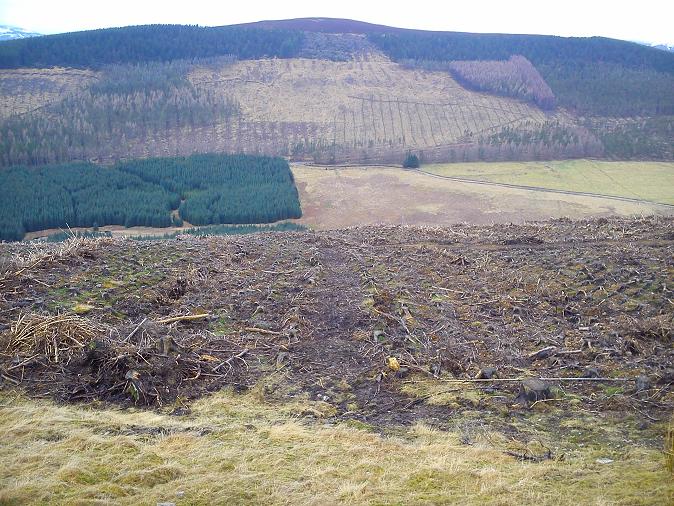 A clear path to Crock Back to Hare Cairn from below the windblow 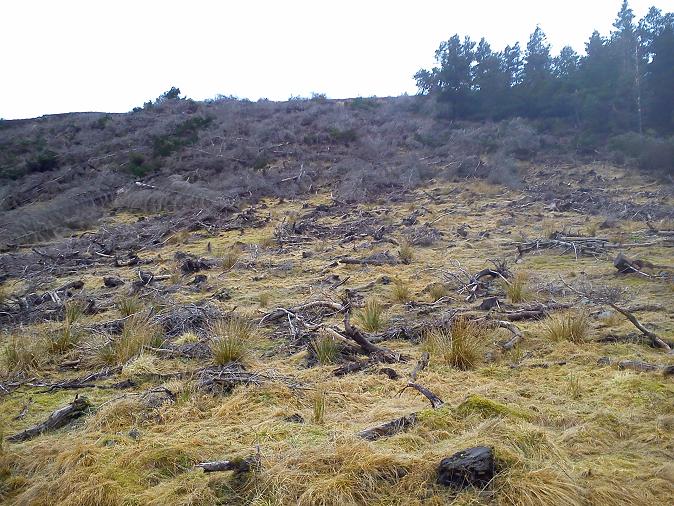 Now I enjoy a challenge, and I'm quite tall and flexible in climbing or crawling under things. But I think if I'd been sensible, I would've taken a look at this and gone back around it, somehow, anyhow. About 50m of windblown must have taken me half an hour to climb through. I think a nice, sheer rockface might have been preferable. Still, good practice for planned, scrambling later on in the year - as long as the scrambles involve pointy sticks that may break if you try to stand on them, catch on your rucksack, and be slimy and slippy. I'd recommend a chainsaw, if your rucksack, unlike mine, could cope. It will probably be easier to follow my route than it was to blaze it - it should be obvious by all the snapped twigs, shiny logs, and bits of skin that I left on the route.

I was shattered after fighting through the windblown and staggered through the heather to the top. The clouds had come down over my enthusiasm through that section, but I hadn't noticed that they had literally come down as well. So the reward for all that effort was a view of clag. 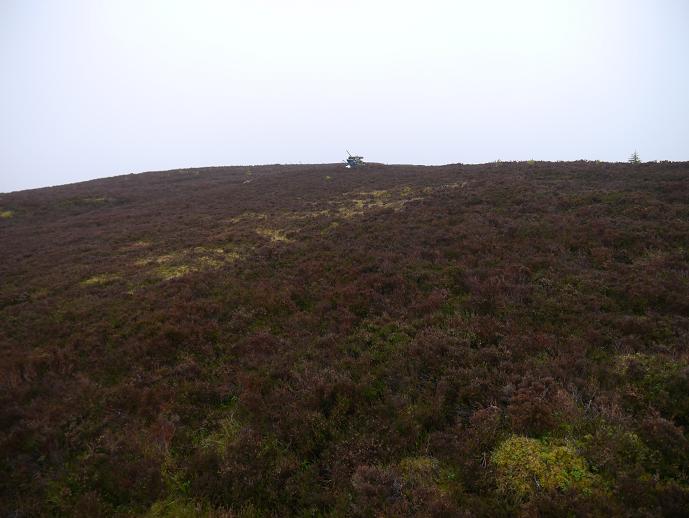 The top of Crock, phew.

So I wasn't going back down that way. I went off to the north down Gordie12's portal, sporting the lowest patches of snow in the area. The portal comes to a sudden end at a large patch of felling. I had been heading along this way hoping to find the wall heading off down to the east from the shoulder of Craigie Law. But I just cut across the felled area towards this wall, taking care not to tread on any of the replanted saplings. When this lot grow up, they're planted really close and they haven't tidied the ground up underneath - that will be a truly impassable combination in 20 years' time. 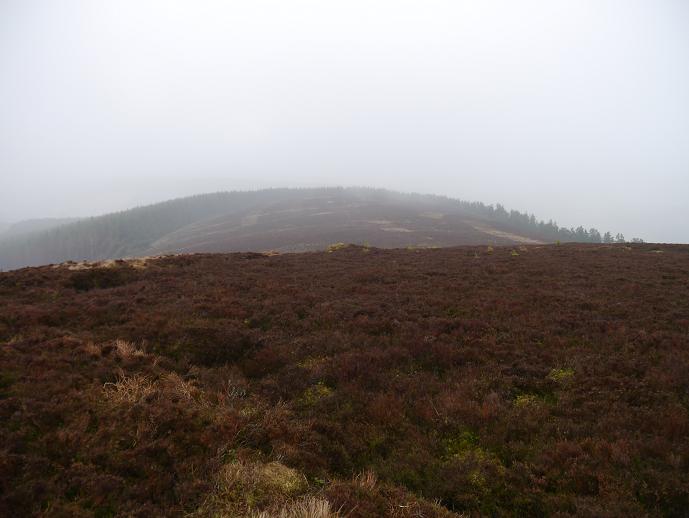 Not a very good shot of the path to the portal, but the best I could do on the day

I'd wanted to cross the Finlet Burn at or near the dam marked at the bottom of the wall, but with the high river level it was just flowing straight over the top of it - more like a weir than a dam. They were also doing the replanting of the area below the track so gave in on the short route back via Glenmarkie Lodge and any lingering hopes of having the energy and time to get up Corwharn and plodded back off down the track towards the one bridge over the stream a km and a half to the south. I cut the corner down an unmapped access track and across the fields past the substantial set of ruins and onto the track I'd come along before. From there, it was about a 4 and a half km walk back to the car in increasingly heavy drizzle. The track is very well made - now on a waymarked route between Kirkton of Glenisla and Glen Prosen - and has an excellent new footbridge over the Glendamff Burn half a km north of Barny, alongside the ford marked on the map. The drizzle did that trick of never actually feeling like it was worth putting on waterproof trousers, but at some point you realise you're soaked to the skin. 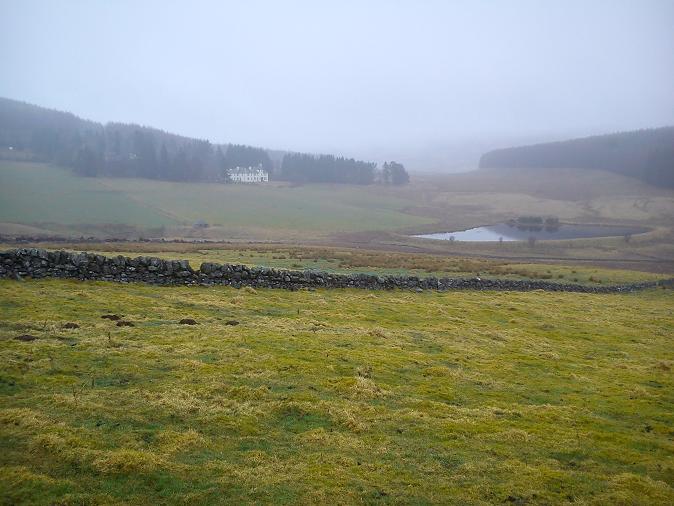 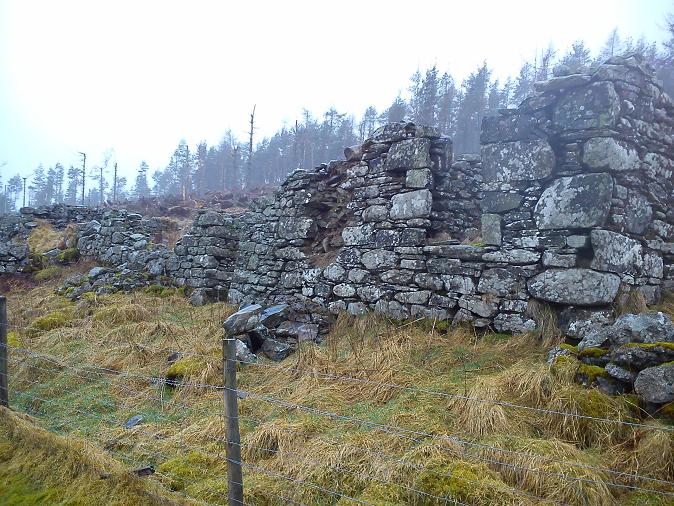 So soaked, looking like I was dragged through a hedge backwards (because I was), and with suffering shoulders from stupid pack I made it back to the car. Would you believe I rather enjoyed it all, at the very least in hindsight?

. fast becoming the most talked about hill for all the wrong reasons.

Aye these forestry ones can be a nightmare at times. I'm looking forward to the challenge of combining these two as well but will probably be cursing all the way round

Great report and congratulations on cracking Crock...............your badge of honour is in the post.

I remember looking from Hare Cairn over to Crock (last winter when the area was covered in a foot of snow) and thinking that looks easy, clearly I was wrong!