Day 1
Myself and my Finnish walking friend wanted to make the trip in only four days, walking and camping our way across Scotland over a long weekend (Fri-Mon). I parked my car in Inverness on Friday morning and we caught the bus to Fort William arriving to begin our journey at 11am. Starting out from South to North

In order to complete the full distance in the 4 days we decided we'd cover the 24 miles (38km) from Fort Willaim to Laggan on the first day while we still had plenty of pep (Nice theory!).
We covered the first stretch from Fort William to Gairlochy (17km) at a good pace, walking on the flat terrain. We were blessed with absolutely blazing sunshine

and as a result the views along the beach leaving Fort William were pretty breath-taking. 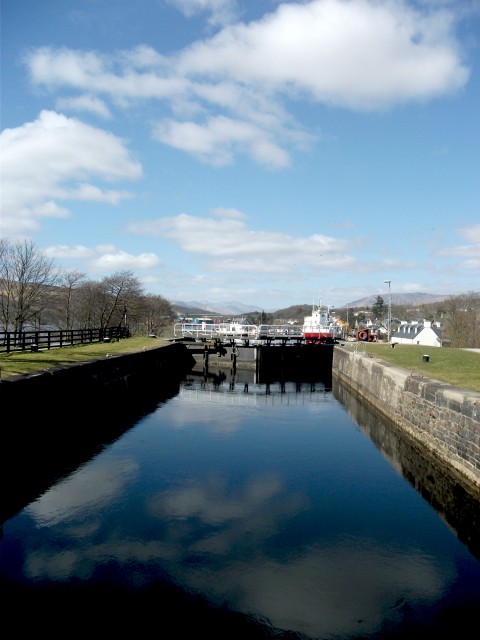 We arrived at Gairlochy, had a bite to eat, and pushed on for North Laggan (22km). The path winding out of Gairlochy leads you up onto an old woodland trail and this section gave our feet some time to cool down after all the concretey type walking. The path works its way alongside Loch Lochy (Creatively named I'm sure

). To be fair, Loch Lochy was very Lochy indeed. Infact it was 16km of Lochy goodness, and at the end? - The prize of Laggan Locks and our first hot meal of the trip. I had read about the querky 'Eagle Barge' ... A floating bar/restaurant parked at the end of the Loch, and although we were camping my pack weighed 13kilos without a stove and food so we decided we would carry only breakfasts and lunches and tie our meals into the route. We arrived here around 8pm.
So afloat the Eagle Barge we had a fantastic meal and the most important 'Walkers Pint' - I would highly recommend - If you stop by be sure to ask Will to do his card tricks, they will confuse and amaze! Bellies full, the festivities on the barge went on a little later than expected leaving the tent construction to be a dark affair but we coped, slept, and then it was time to press on again.

Day 2
Just about the last thing you want to wake up to is a crop of blisters - Unfortunately my Finnish compadre's feet were absolutely covered in them. This meant a late start as we had to compede, tape, plaster and pretty much cushion them in order to move on. Looking like an Egyptian Mummy, she bravely got moving again. Next was the 14km to Fort Augustus, the path for which takes you alongside Loch Oich, then along the canal-side paths again. We had a little bit of rain in the morning then the sun broke through again, and the weather pretty much chopped and changed like this for the rest of the day as you would expect from April in the Highlands. We had a good hot meal in a pub in Fort Augustus then set off for Invermoriston, this is only 13km but our pace was quite sluggish so it did take us a while to wind up through the forestry and find Invermoriston. We camped in Invermoriston and assembled the tent as it was getting dark, maybe I should have been in the army! Day 3
The plan for this day was to head out of Invermoriston onto Drumnadrochit (stretch is about 23km). This part of the walk has more climbing than the previous days, but as a hill walker, they were a welcome change from the long flat sections. We set a really good pace and this was possibly my favourite days walking in all, the views of Loch Ness were pretty stunning in the morning and the days walking flew by. As we walked down into Lewiston just shy of Drumnadrochit the heavens kind of opened and our packs got a little heavier... On the upside we hit up the Drumnadrochit Hotel and had a very good meal. Although the official stage marker for the day was to get to the village, we decided after dinner to push on and eat into the 18 remaining miles to make the final leg easier. As it happened we only managed a couple of miles before we ran out of daylight, so we pitched the tent for the last time, this time in the forest on some forgivingly spongey moss, so the sleep here was good, but the scenery was better. Day 4
Our final day walking was probably the toughest, it rained a good bit overnight and carrying a wet tent is a different story from a dry one. I was finding the rucksack was hurting the bones on my shoulders and a fair bit of road walking was doing its bit to start aches in my ankles and knees. As it happened however, as we were walking along the final stretch to Inverness, past Blackfold etc, we passed a group of Walkers who although were mostly septuagenarians decked out in the flashest gear (Solar grid rucksacks and spotless gaters etc) .. my wee Finnish friend and I decided to get a little bit competitive and blaze past them - They would perform a swift overtake here, us a sneaky undertake there... the race was on. We set quite a fast pace so I'm guessing they had their porridge that morning. Fun aside, we managed to wind down into Inverness much earlier than we had expected, for about 4:30pm where the sun was shining and we could finally say it;

We walked across Scotland! 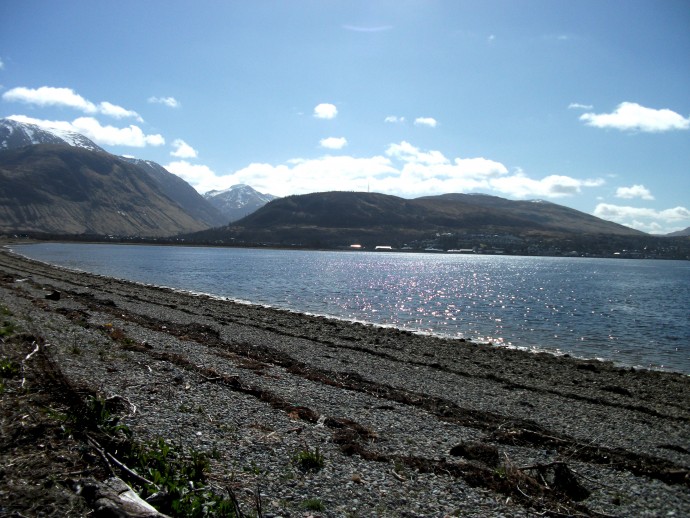 Sounds like you had a great time - photos were really good!

Gordie12 wrote:Sounds like you had a great time - photos were really good!

Thanks for the comment - I was really lucky with the sunshine, it made taking the photos easy!

I think I would recommend to most people to walk it in 5 or 6 days if they wanted to stop and explore the towns/castles along the way, and also that amount of milage in a day puts a lot of heat on your feet - For comparison I wore a pair of well broken-in Scarpa walking boots with a heavy sole and I didn't have a single foot problem, and my friend wore brand new boots and they made her journey a real challange because she was just covered in blisters, just goes to show what a good pair of boots really means.

If you're not too fussed about the touristy parts along the way though walking the Great Glen in 4 days is a pretty good challange!

Did the West Highland Way during April 2013 in 5 days with three mates and now thinking of doing Great Glen Way same time next year. Got a few tips and pointers from your report so will meet up and discuss over a few malts - Cheers.

I'm doing this walk in 2 months time and can't wait!

This walk is my aim for later this year as I'm new to backpacking. Loved the photos, especially the wee mousy

Great shots! Seeing your pics, there seems to be a lot more forest than I thought - do you think that's a correct assessment => which would make it possible to walk this while camping in a hammock...?

mcjump - I've done the Great Glen Way also and there were a lot of trees but there has also been a lot of deforestation, so I wouldn't recommend taking a hammock. Plenty of campsites and wild camping spots though.

A great read and insight, was thinking of doing this after the WHW and seems doable if you're carrying a tent etc, I'm booked into accom on the WHW but was going to get pack/tent delivered so I was "fresh" to go straight onto GGW, booked for April 2017.

Jamboman wrote:A great read and insight, was thinking of doing this after the WHW and seems doable if you're carrying a tent etc, I'm booked into accom on the WHW but was going to get pack/tent delivered so I was "fresh" to go straight onto GGW, booked for April 2017.

I did the WHW/GGW combo in 2013 - they are completely different in terrain and feel but put together they are really enjoyable (weather permitting as always).